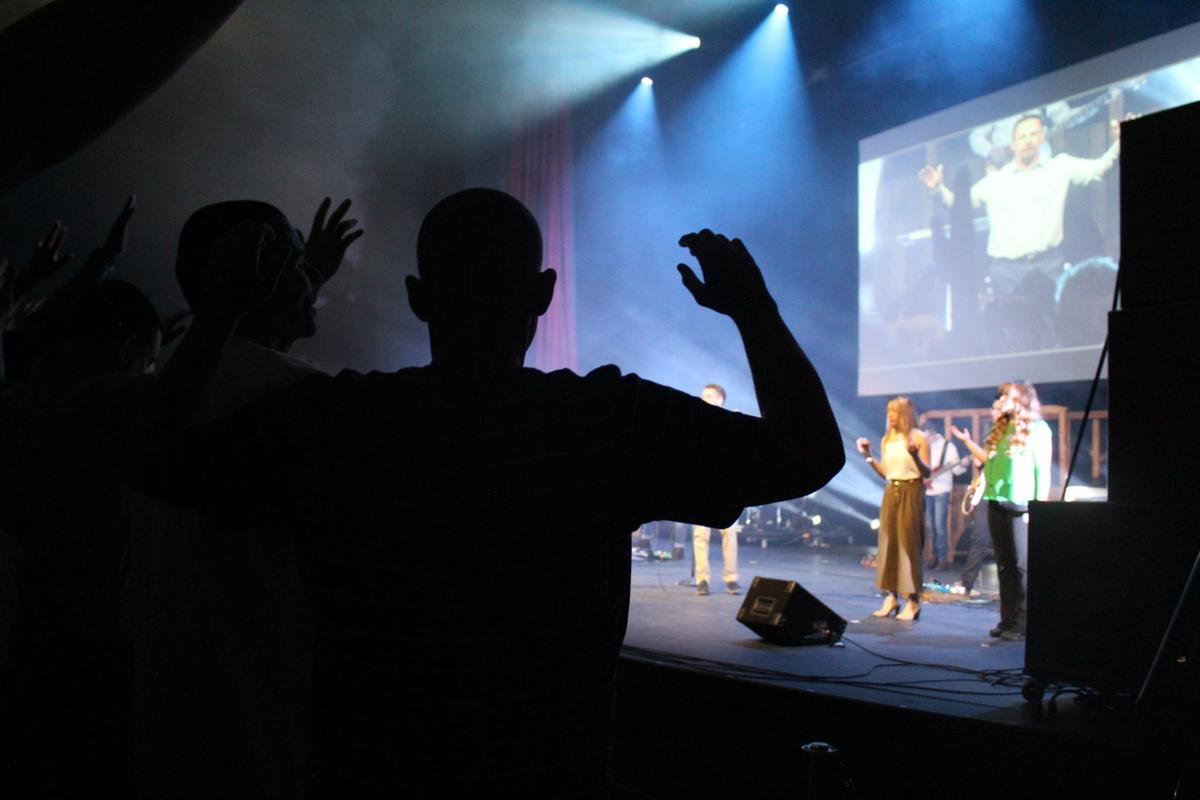 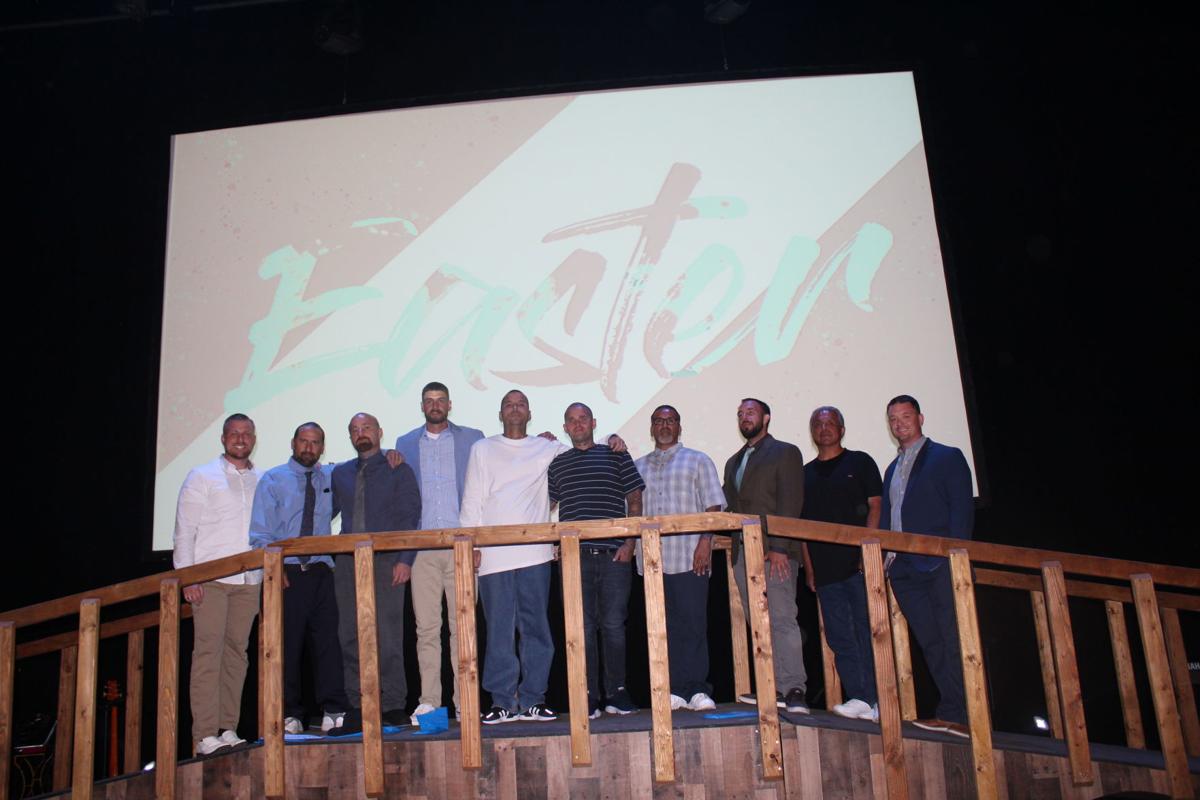 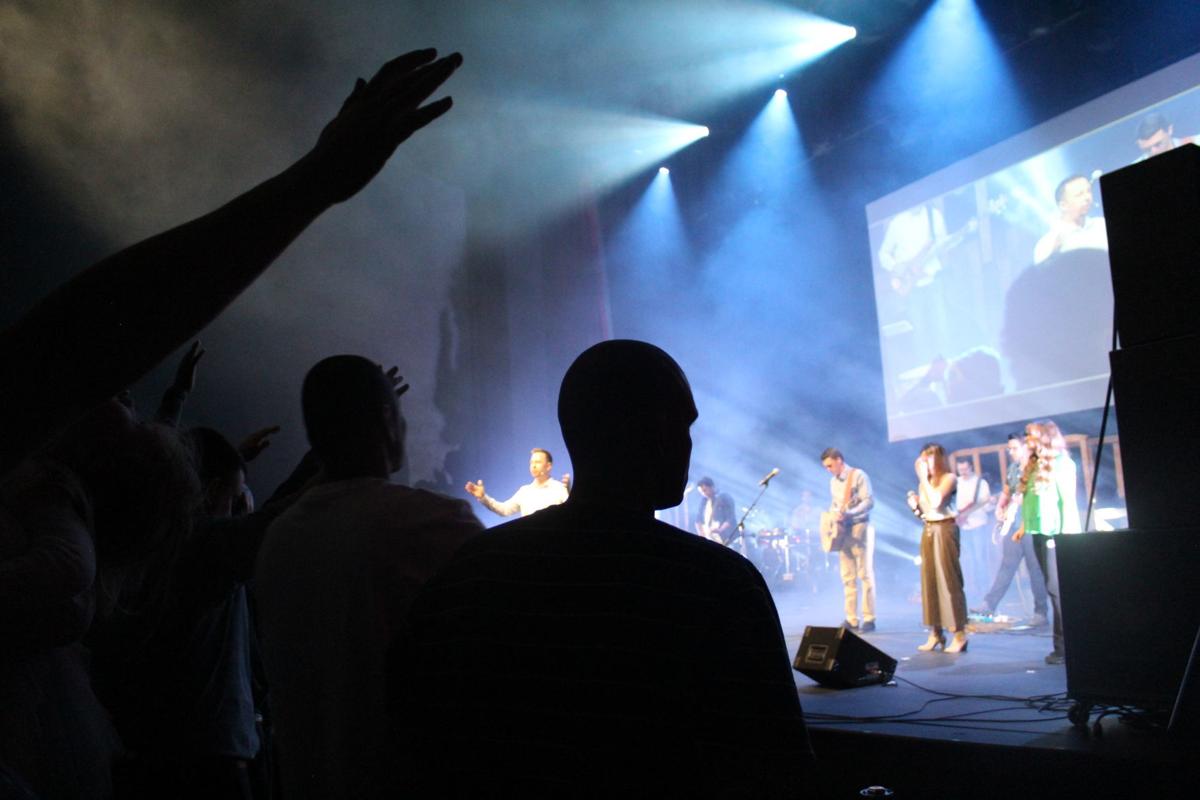 The reserved seats near the front row of the nearly packed auditorium were for several members of the Arizona Department of Corrections’ Maricopa Reentry Center who were driven up from the Phoenix prison.

Surrounded by women holding babies, elders and other community members, the parolee's jumped in sync with the live music, high-fived each other and shouted “Hallelujah!” during the opening number.

Later in the service, lyrics were projected on a giant screen for the crowd to sing along with the church worship team. When “This is freedom!” appeared, the MRC members’ fists shot up in agreement.

The Maricopa Reentry Center participants are not inmates but citizens under parole, having been found eligible for community supervision status, according to project specialist Justin Benjamin, a former Flagstaff resident who was once an inmate himself.

“These reentry centers are basically diversion programs. We don’t have to lock people up for technical things — for things like addictions,” Benjamin said after the church service Sunday. “The facility that we house [the MRC members] is an institutional setting, but the inside is very much a treatment center.”

The MRC and programs like it offer substance abuse, life skills and self-help classes, employment assistance and more. Participants are able to go on supervised shopping trips once a month and sometimes go on outings, such as to Flagstaff on Easter. The group had been to Flagstaff once before to sled in the snow and have coffee with Pastor Landon Merrill of Bridge Church.

Benjamin, who had been a member of Bridge Church for three years before moving to Maricopa County to help out at the center in 2016, asked Merrill if he could offer his prayers and lectures as part of the center’s motivational enhancement last year.

Merrill began streaming his services into the prison chapel, and then began commuting to the Phoenix prison with some of his church-goers for the last Wednesday of each month. The center’s “Wins-day,” is where the wins and successes of the MRC members are celebrated. Merrill often gives the closing messages and prays with the program members.

“They were very receptive. They are guys that are ready to get their life on the right path,” Merrill said. “They just needed somebody to believe in them.”

Both Benjamin and Merrill support Governor Doug Ducey’s efforts to reduce recidivism and are on his goal council. In November 2017, Ducey launched a pilot program to help former prisoners commute to jobs, began the effort to ban the box on employment applications asking whether applicants had a criminal record and started to prioritize employment centers within Arizona prisons, according to Cronkite News. The idea is that reducing recidivism not only makes communities safer because the same felons aren’t going out and committing the same crimes, but also would significantly lower the cost of prison stays.

“There’s been a lot of positive changes within the (Department of Corrections) with the governor’s goal council,” Benjamin said. “The goal is to reduce recidivism by 25% in the next 10 to 25 years. In the first three years we’ve already reduced it by 8% or 9%.”

Although the MRC is not a religious program, Merrill said that for the members who chose to participate with Bridge Church, it was the first place of worship many of them really connected with, and that community acceptance will play a big part in their release.

“The statistics are when an inmate gets connected to a faith-based organization, their chances of going back to prison reduce by 80%,” Merrill said.

During Merrill’s announcement of the church renaming, he also said that by 2028 he plans to have a Bridge Church in six more Arizona locations outside of Flagstaff and Lake Havasu, hoping to build in Phoenix, Tucson and Tempe. He also plans on having a church ministry for every prison in the state.

Before Literacy Center classes at the Coconino County Jail, inmate Kevin Wright’s only formal schooling in his 35 years was his first day of kindergarten.

With the amount of female inmates at the county jail around only 11 percent of the total population, the women don’t have a full re-entry program like the men. However, they do have resources like optional weekly Literacy Center classes.

DO NOT GO TO JAIL

Coconino County Adult Probation officers are winning awards for keeping offenders out of jail and prison.

After over 16 public meetings in communities around the state, including some gatherings with prisoners in jails, the Arizona Town Hall associ…