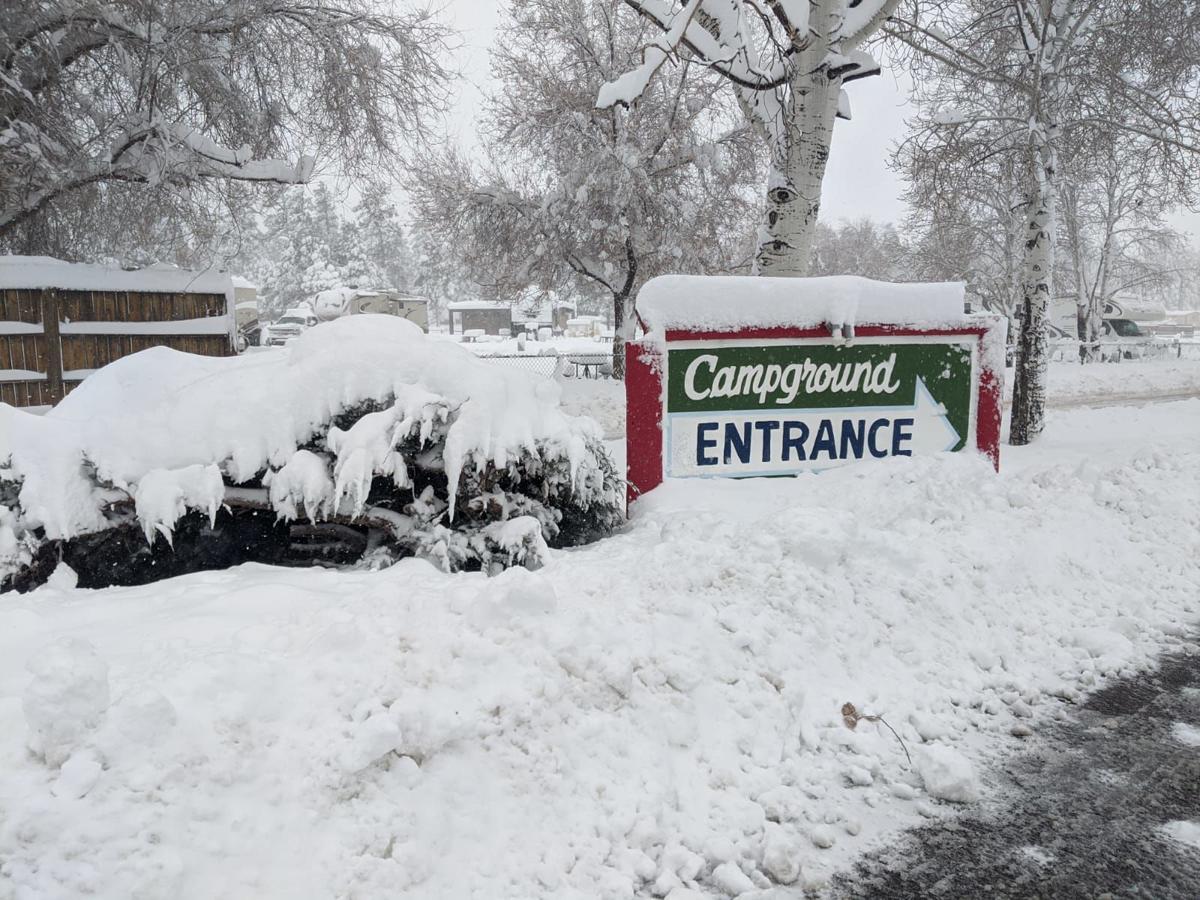 A campground sign near the Grand Canyon is covered with snow after a storm moved through the area on Friday. 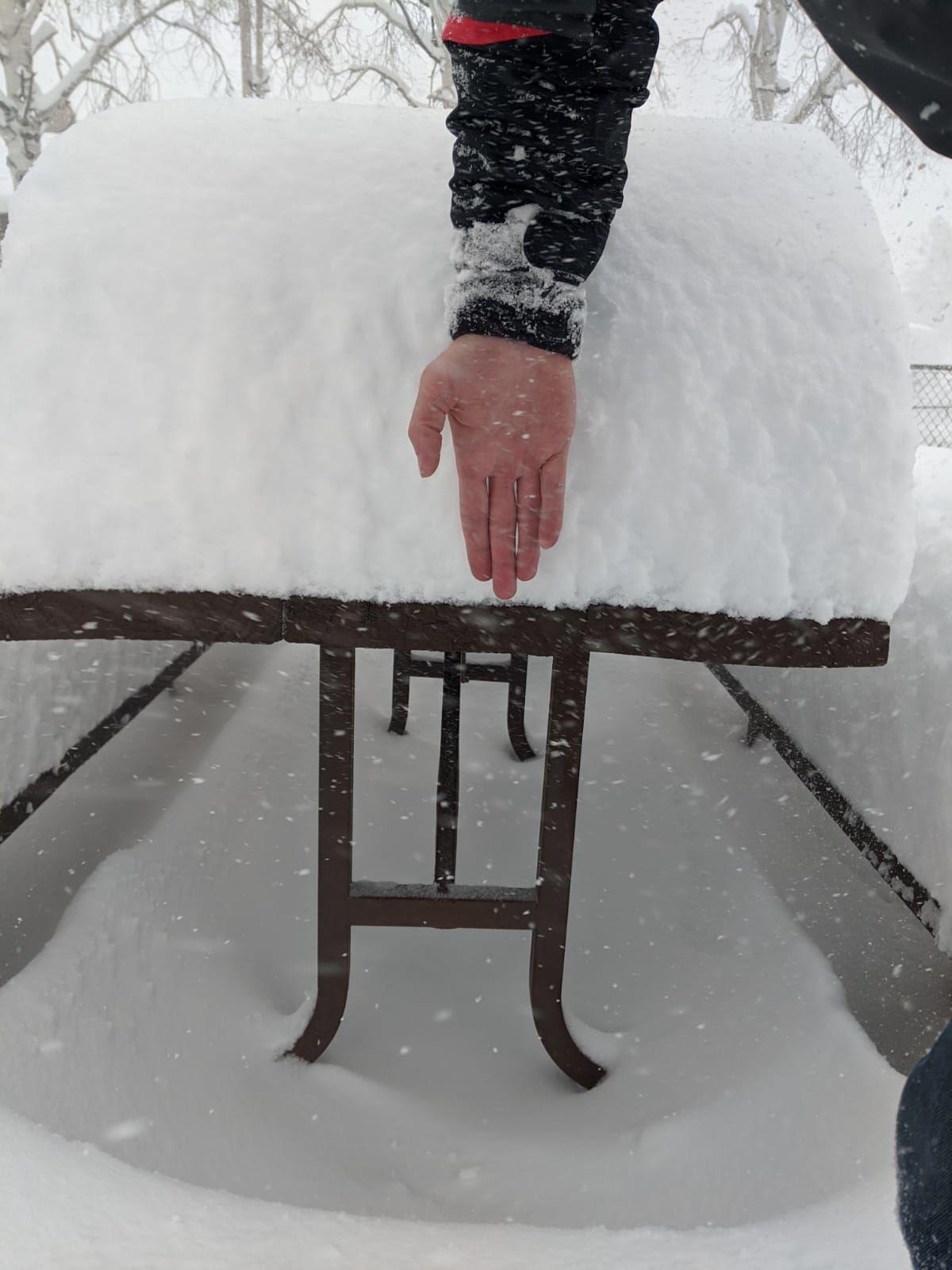 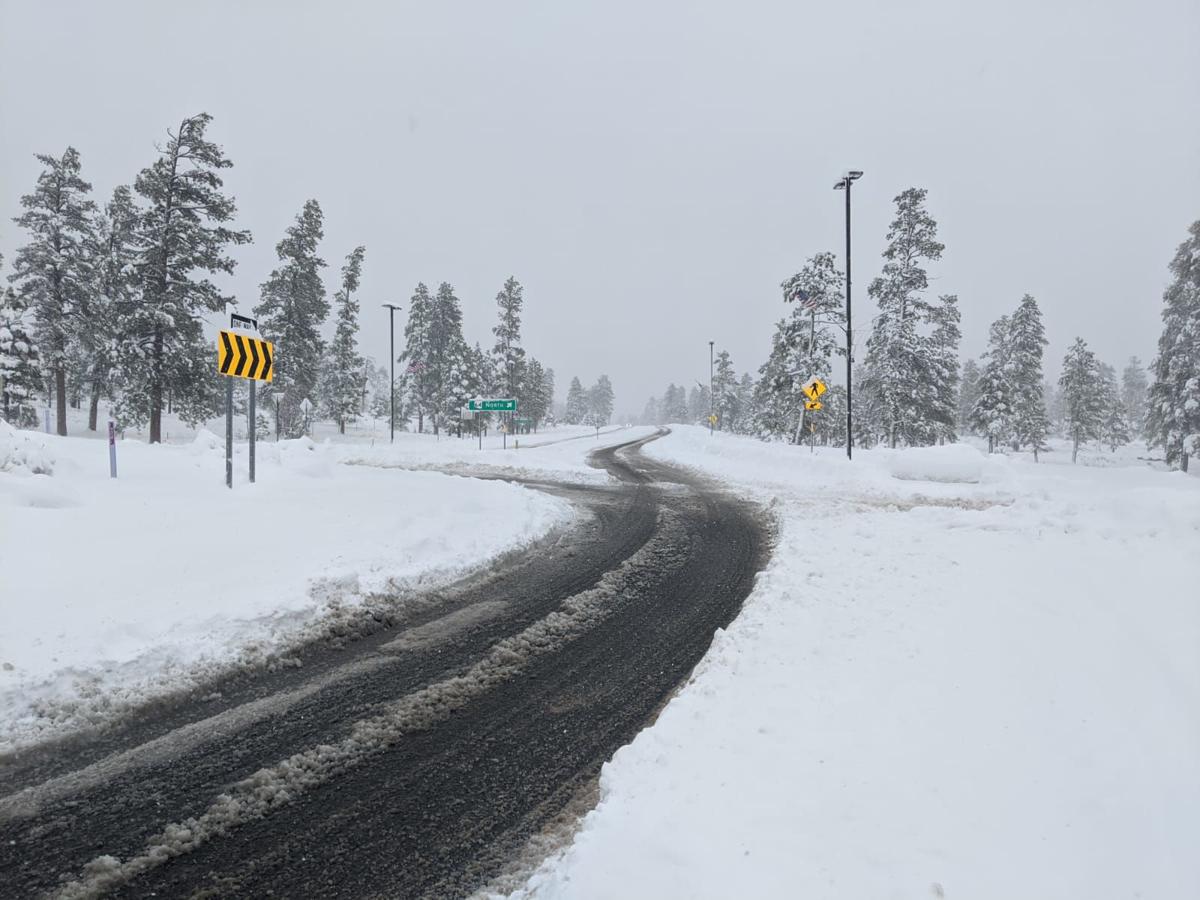 The roads near Tusayan were shut down on Friday due to a winter storm that dropped almost two feet of snow in the area.

The City of Tusayan and Grand Canyon National Park were hit with around two feet of snow, leaving more than 1,000 people stuck without power Friday morning due to the impassable roads and fuel shortages.

Tusayan declared a state of emergency for those people snowed into the city, widely seen as an entrance to the south rim of the Grand Canyon National Park.

Nick Snow, a tourist staying in a rented RV at the campground in Tusayan, told the Arizona Daily Sun he walked down the city sidewalks and witnessed people as they adapted to being snowed in without power.

Snow said he saw the lights were out in the lodges, restaurants and gas station windows. Despite fuel shortages, there was still a line of cars to the gas station, but it wasn’t pumping gas. Inside the lightless gas station, he could see a line of people buying non-perishable food and other supplies with cash from whoever was working the front.

“Seeing people walking up and down the street without power, and kind of confused, had a bit of an apocalyptic feeling to it,” Snow said. “Electricity is one of those things you don’t think about in your day to day, but man, when you don’t have it, it’s a pain.”

The power officially shut off at 3 a.m. as the snowstorm began to hit the south rim. Estimates Friday afternoon said 15 inches of snow had fallen on the Grand Canyon National Park's south rim. When Snow woke up, he said there was already one foot of powder built up on the ground.

Because of the condition of the roads, Snow and his friend made the decision early on to wait out the storm and keep off the road. Tusayan Mayor Craig Sanderson said the city was working with the county, Arizona Department of Transportation, Arizona Public Service and the National Park Services to get the roads cleared.

“Getting the roads open is the main thing we need,” Sanderson said. “The county and ADOT are working to make it possible to safely travel State Route 64.”

The Northern Arizona Chapter of the American Red Cross was deployed and staff were ready to help anyone in need on Friday afternoon. The emergency shelter was set up at the Horace Albright Training Center located in the Grand Canyon National Park.

Additionally, the town council and staff worked to get information out to the community and people in need who may not have internet or electricity to get messaging. The Grand Canyon National Park set up an emergency operation center and had their own crews trying to plow the road.

Park service spokeswoman Lily Daniels said the park's back country and south rim rangers were not patrolling during the storm, but trails were still open.

“They're not closed and people can hike them, but that’s at the risk of the individuals who want to hike,” Daniels said.

While some markets were dark, the Canyon Village Market was running on a back-up generator to ensure people had access to food.

Daniels said power was expected to return by 8 p.m. If the power outage were to last more than a day, they would have accommodations for residents in need, but trash build-up could become a greater concern.

Daniels added that some lodges have generators or fireplaces for people, and added that many residents have fireplaces as an alternative way to stay warm.

“We’re planning and trying to care of the needs of everyone,” Daniels said.

Although Snow just recently moved to California, he and his friend are from the Midwest and are used to heavy snow. He said he knows how to handle himself when heavy powder sets in, but admitted they didn’t heed the weather service’s warnings as much as he should have.

“We expected it, but it looked like maybe that wasn’t going to be the case," Snow said. "No, the weather folks nailed it and we weren’t listening closely enough.”

Luckily, the two had their own generator, heater and a small fridge stocked with Thanksgiving leftovers.

For most of the day, Snow and his friend have slept, read local weather news and stayed in their RV. Despite a day of their vacation lost, as of Friday afternoon, Snow said he was adopting a glass-half-full mentality.

After all, for them, it’s still the Grand Canyon.

“This really isn’t the worst thing to me,” Snow said. “I’m pretty excited to go back to the south rim first thing tomorrow to see what it looks like covered in snow before we come home.”

Snow continued to fall throughout Friday morning in Flagstaff.

Could the snow drain the green from Black Friday in Flagstaff?

With between 17 to 23 inches of snow expected from Thursday afternoon to Saturday night, business owners across the city are wondering just ho…

A campground sign near the Grand Canyon is covered with snow after a storm moved through the area on Friday.

The roads near Tusayan were shut down on Friday due to a winter storm that dropped almost two feet of snow in the area.