The Flagstaff Police Department responded to a call of an attempted armed robbery and report of someone shooting a firearm on Milton Road Thursday night.

Flagstaff police met the female victim who said that, while walking down 1900 block of South Milton Road near the AutoZone, she was contacted by a man driving a red sedan. Police are looking for the man who allegedly attempted to rob the woman and shot at her with a gun. The suspect is believed to be a Native American man driving a red Toyota Prius.

The man reportedly slowed down on Milton Road to speak with the woman. He rolled the passenger window down and leaned toward her to speak, the woman said.

The victim said she initially believed the suspect was pointing his finger at her.

"Give me your purse or I'll shoot you," the man reportedly said.

The victim told police she walked away from the driver while the suspect continued to point at her. The victim then heard a gun shot from the vehicle, and ran to a nearby business.

The vehicle sped away, and the victim was uninjured. 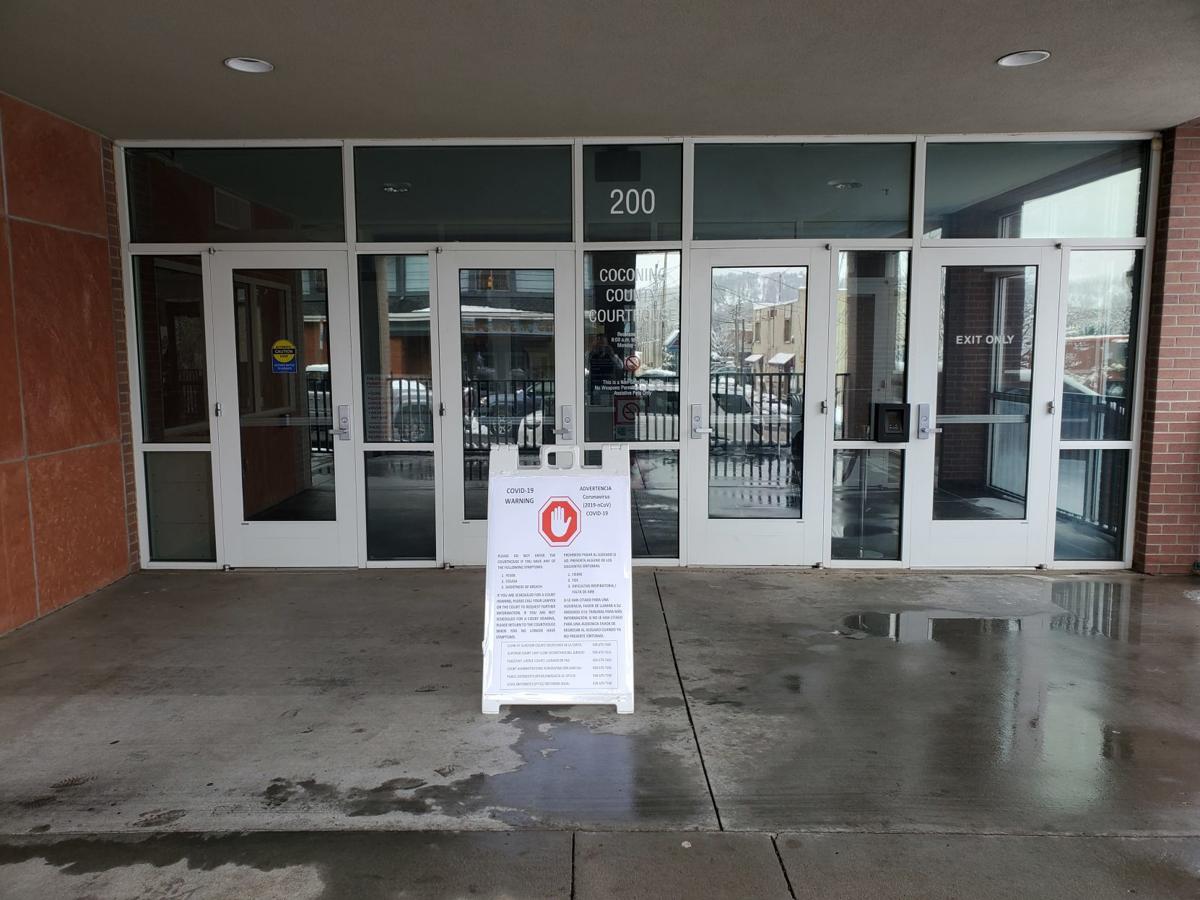 The Coconino County court system and jail have released around 50 inmates held on non-violent charges in light of concerns about the coronavirus spreading within the jail and possibly endangering the people of Flagstaff and Coconino County.

Presiding Judge Dan Slayton, along with other county judges, gave the court order to release inmates that were being held for non-violent crimes. Due to the high influx of people coming in and out of the jail on any given day, and the tight living conditions inside the jail, prisoners are at risk to diseases that spread easily like COVID-19, according to jail commander Matt Figueroa. The decision to rely upon summons instead of holding the inmates in jail frees up detention facility officers to better manage inmates who were booked on more serious accusations.

The decision to release inmates is just one example of the measures agencies are taking to avoid the coronavirus spreading through parts of the criminal justice system. Attorneys with the Public Defender’s Office are working from home and filing cases online; the Coconino County Superior Court is relying heavily on video conferencing when appropriate; and Flagstaff Police Department is giving its patrol officers “disinfectant kits” to keep their patrol cars coronavirus-free.

“I don’t think we’ve ever had this kind of issue, but I feel very confident about how at least our justice stakeholders, County Board of Supervisors, and how everybody is reacting and working together to meet the issues we’re facing,” Slayton said.

In order to better manage the jail population, Coconino County Sheriff Jim Driscoll and Judge Slayton discussed whether it would be possible to release around 50 inmates to reduce the jail population to closer to 400. Although the number fluctuates, Figueroa said having more detention officers per inmate helps them better oversee the population.

Figueroa also said detention officers always screen for sickness and travel history before booking inmates, but are now adding questions specific to COVID-19. He said on Thursday that no inmates have shown any symptoms that indicate someone has the coronavirus.

“The population that has already been quarantined doesn’t have it, and the potential for them to come into contact with the virus, in my mind, would lessen because they’re in a controlled environment,” Figueroa said.

The Sheriff’s Office has also said all non-essential personnel will be kept away from the facility, although family members can continue to video conference with current inmates using online services. Additionally, should any potential virus spread into the jail, Figueroa explained the jail is ready to utilize a quarantine strategy developed during the H1N1 scare more than a decade ago.

“We’re trying to work collaboratively not only with courts, but with prosecutors, attorneys and law enforcement to figure out strategies to see what we can do for the primary reason to keep virus from spreading,” Figueroa said.

While all bars have been ordered to close their doors and restaurants have transitioned to delivery or to-go services, Slayton said the criminal justice system cannot shut down.

On Thursday, Slayton signed an administrative order to undergo measures in the hopes of protecting court staff, attorneys, victims, defendants and their families from possibly contracting the coronavirus.

“The courts have to remain open,” Slayton said. “We have to be available to hear all of our cases and cases that come in.”

Slayton said he has given his bailiffs the authority to prevent people from entering the courthouse if they show symptoms similar to the coronavirus, although they will not screen people. Additionally, non-essential personnel will not be allowed to view any hearings, although journalists will be allowed.

Excluding cases related to adoptions and court-ordered child removal, most cases will likely be handled over video, telephone or be postponed. The court worked with the jail to set up a second, temporary video courtroom at the jail to allow the inmates to stay at the jail.

Additionally, Arizona Chief Justice Robert Brutinel issued a similar administrative order for the entire state stopping jury trials to avoid gatherings of over 10 people. People paying court fines will be asked to mail their payments, pay online or at a PayNearMe vendor.

The Flagstaff police have seen a reduction in crimes and calls for service as people have begun to stay indoors, Charles Hernandez, spokesman for the Flagstaff Police Department said.

“We’d hope to see that it would subside given there’s more important things like virus and health safety,” Hernandez said.

Although supplies are limited, the Coconino County Sheriff’s Office and Flagstaff Police Department have both provided officers and deputies gloves, masks, hand sanitizer and bleach wipes to clean their patrol vehicles after every interaction.

Hernandez said there has been no final guidance to say whether officers will cite and release any or all non-violent offenders at this time, but officers currently are able to make that choice under current police regulations in instances of non-violent, misdemeanor crimes. Any person who commits a violent or felony crime will require being put in jail. Hernandez added that if anyone is detained who is symptomatic, Guardian Medical Transport personnel are always called to the scene to assess the person before taking them to the jail.

“That’s the last thing we want to do is put someone sick into the jail when we need to get help at the hospital with whatever they may be suffering from,” Hernandez said.

Slayton explained that going forward all agencies of the criminal justice system are continuing to meet often and discuss how to act moving forward.

“This crisis is very fast-moving target. It is creating issues that seem to move from one place to another rapidly,” Slayton said. “What I’ve explained to the folks I’m with is my goal with my administrative order is to box [the crisis] in. I don’t think you can hit a fast moving target directly on.” 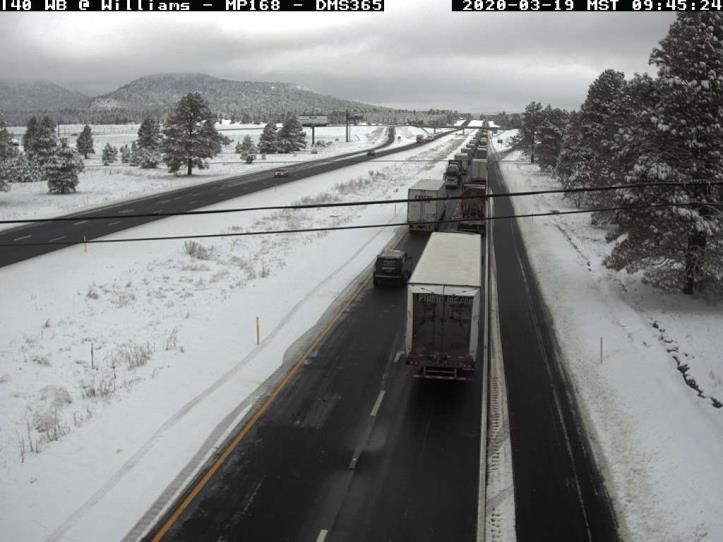 The Arizona Department of Public Safety reported that the winter storm on Wednesday and Thursday resulted in 14 collisions that caused major delays on the westbound Interstate 40.

Two jack-knifed semi trucks that had difficulty going up the grade, motorcyclists colliding with semi trucks and vehicles sliding off the roadway caused chaos on the interstate during the storm. Bart Graves, DPS spokesman, said all road closures and delays are now cleared as of noon Thursday.

"Sometimes in adverse weather conditions does create slide-offs and does create chain reaction collisions, and sometimes collisions on their own," Graves said.

Although the roads are now clear outside of Williams, one lane of the interstate near Seligman in Yavapai County has been recently closed causing delays.

Graves explained the case is related to an investigation into a person who threatened death by suicide but the person has been taken into custody, and is being managed by Yavapai County Sheriff's Office. The area will likely continue to have delays until the investigation is completed.

Multiple crashes have caused heavy traffic on the westbound Interstate 40 near Williams, according to Arizona Department of Transportation (ADOT) information.

ADOT originally closed the road at milepost 161 at 4 p.m. Wednesday and did not reopen the interstate until 5:30 a.m. Thursday morning. The route is still seeing heavy traffic and major delays due to the backlog of traffic. The route was initially closed Wednesday when multiple crashes and blocked the interstate.

Since Wednesday, the National Weather Service has said that 11 inches of snow fell at the Flagstaff Airport while  Williams received 4 inches. Transportation officials have asked that the public postpone travel until the road is cleared.

"It is still advisable for people to delay travel if possible to allow the backup to clear," ADOT told the Arizona Daily Sun Thursday morning.

Vehicle crash causes delays, closure on westbound I-40 near Williams

The westbound lanes of Interstate 40 are closed due to a crash at milepost 161, just west of Williams, according to the Arizona Department of Transportation.

There is no estimated time to reopen the westbound lanes. The eastbound lanes are unaffected.

The region is expected to be hit with snow between Wednesday afternoon and Thursday morning, but could last into Thursday evening. The National Weather Service in Bellemont still calls for 6 to 12 inches of snow in Flagstaff and 9 to 13 inches of snow in Williams. 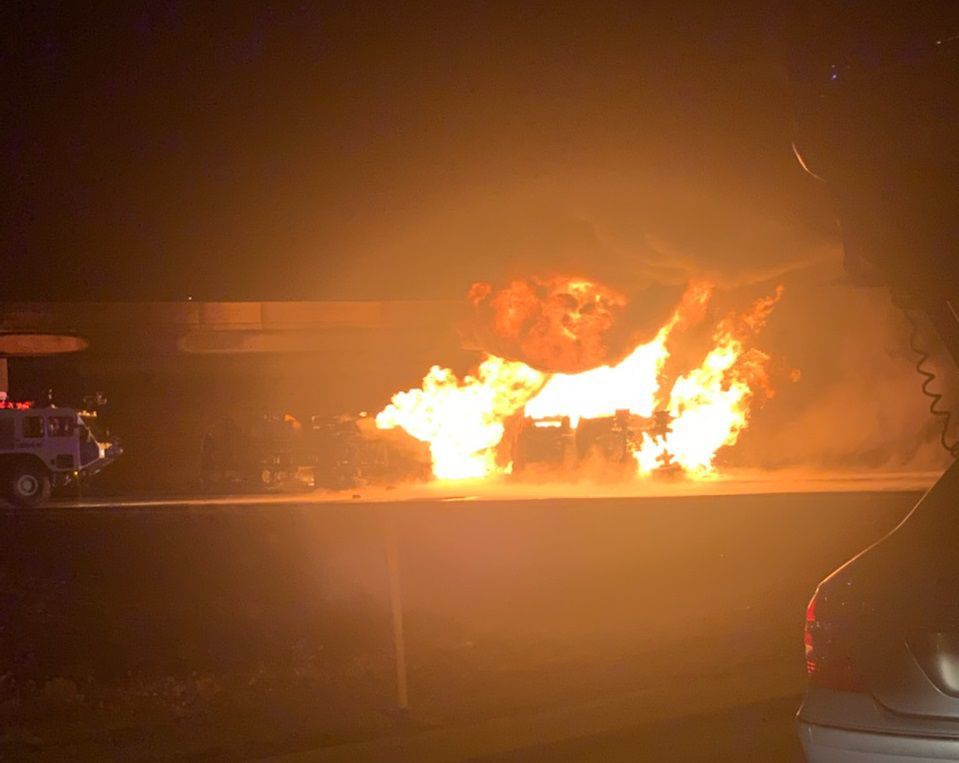 Steve Elliott, spokesman for the Arizona Department of Transportation, said engineers inspected the overpass and found the explosion did not damage the structural integrity of the piers, girders or deck on Tuesday afternoon.

"Some minor, superficial burn damage on a pier cap will eventually need patching," Elliott said. "The bridge also will need to be power-washed."

Flagstaff Police Department detectives are continuing to reconstruct the crash as the investigation is in its early stages.

As of Tuesday morning, the Arizona Department of Transportation has continued to leave one lane closed on the eastbound Interstate 40 after a fuel tanker exploded on Butler Avenue.

ADOT officials are investigating whether or not the explosion caused structural damage to the I-40 overpass. The blaze scorched the bridge supports and deck. Authorities closed the eastbound lane entirely at 9 p.m. last night after the explosion, and opened the left lane of the interstate open at 10:25 p.m. Monday night.

The fire damage was caused when loaded fuel tanker sped down the eastbound off ramp and attempted to turn onto Butler Avenue, according to two witnesses who were at the scene during the time of the incident. After speeding down the off ramp, the tanker tipped over and caused an explosion.

"The vehicles were removed from the scene early this morning," ADOT officials said in a statement to the Arizona Daily Sun. "We have no estimated time on when the inspection will end."

Get breaking news and news alerts sent to your inbox as they happen! Sign up: