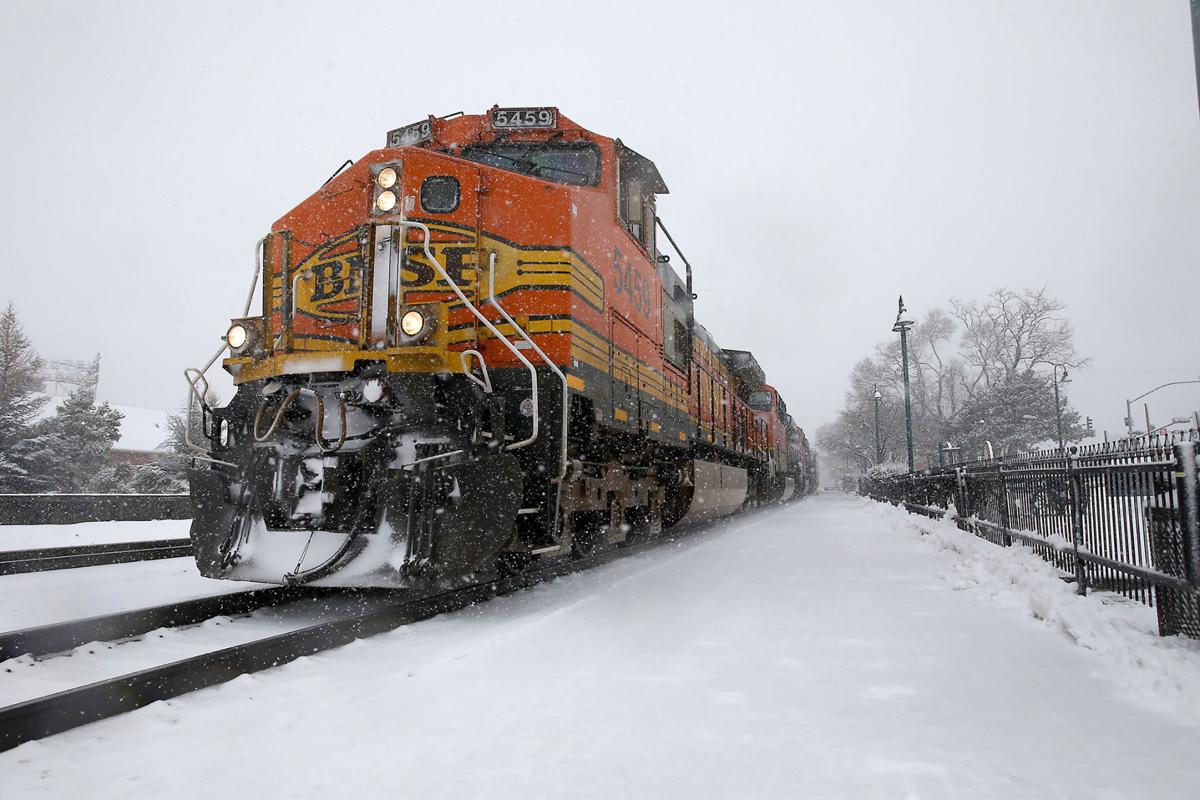 A train roars through downtown Flagstaff heading east Tuesday afternoon as snow blankets the area. Another storm is expected to drop 18-36 inches of snow in Flagstaff this weekend. 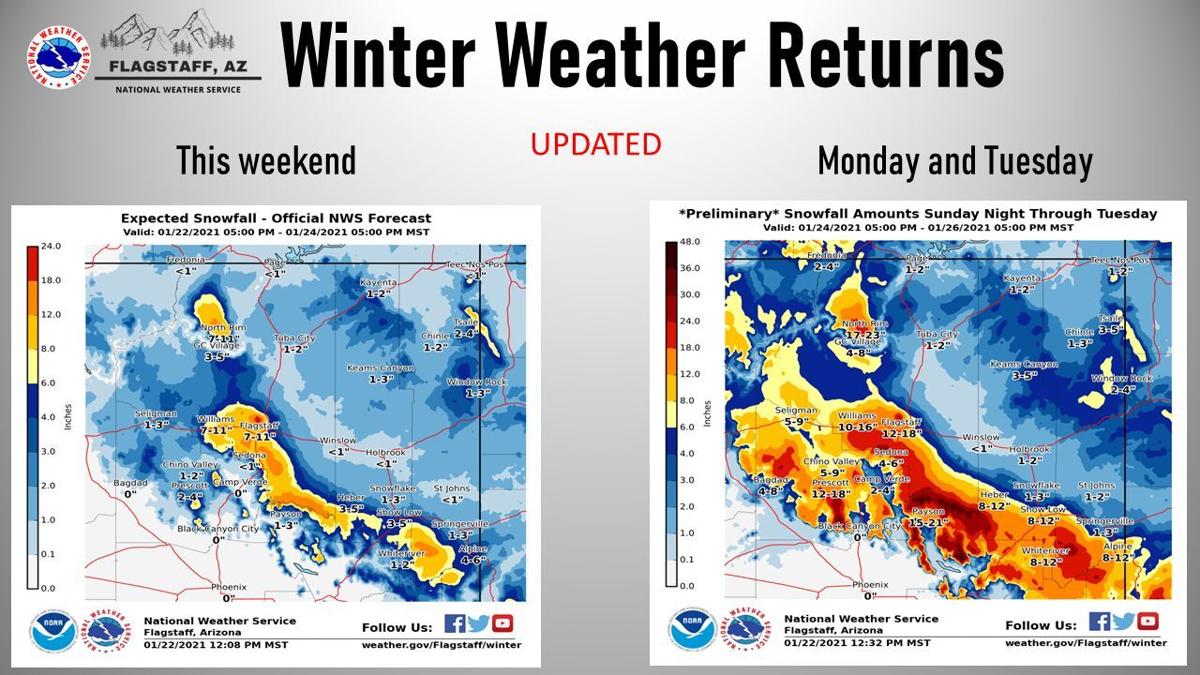 This image, shared on Friday afternoon by the National Weather Service in Flagstaff, shows the two incoming storms predicted to bring significant snowfall to northern Arizona in the coming days.

The National Weather Service in Flagstaff has issued a winter weather advisory lasting from Friday at 8 p.m. through Sunday at 5 p.m. as what has been referred to as "Double Whammy” storms reach northern Arizona.

Over the course of the weekend, Flagstaff is expected to receive between 7 and 11 inches of snow. Doney Park could see 4 to 6 inches and Williams 6 to 10 inches.

Snowfall is expected to continue through Tuesday, according to the NWS extended forecast, with the heaviest snow in Flagstaff occurring Saturday night and Monday. Between 4 and 8 inches of new accumulation is possible at each of these two times, with another 3 to 7 inches projected for Monday night. Monday and Tuesday will also see more widespread impacts, with snow levels occurring in areas with elevations as low as 2,000 feet.

Mark Stubblefield, a meteorologist with the National Weather Service in Bellemont, said the two storms are coming off the California coast, with the first to move across areas as low as 4,000 feet in elevation by early Saturday. The second, which is likely to hit the area Monday morning, is predicted to be much colder and bring increased precipitation.

“Some areas may not even have a significant break or clearing between the storms, especially higher terrain areas like the White Mountains. It may just seem like a continuous storm with snow decreasing Sunday night into Monday morning,” Stubblefield said.

As of Friday afternoon, the Flagstaff snow season, which began July 1, has seen 12.8 inches to date, putting it about 32 inches behind average snowfall, Stubblefield said. This week’s earlier storm brought in 5.5 inches at the Flagstaff Airport.

Travel this weekend is discouraged, but if it is unavoidable, Stubblefield suggests individuals check for updates at www.az511.gov and make sure they have adequate supplies including a full tank of gas and extra food and water.

“In the past, freeways have been shut up to 10 hours, so we recommend people have enough supplies to stay warm. Chances of it happening may be low, but it’s better to be prepared than to not have that stuff,” he said, reminding individuals that parking along the freeway to play in the snow is illegal and impedes snowplows.

The city’s Public Works division will deploy all available equipment and operators during the upcoming snow events, according to a press release. Snow operations will continue 24 hours a day through the winter event. First priority roadways for treatment are main arterials, major hills, downtown and school and transit routes. All other streets are considered second priority areas.

To begin treating second priority roads, the first priority roadways must be completed and maintained throughout the snow event. Cinders are applied to major hills, signalized intersections, railroad crossings, shaded areas, problem areas and stop signed intersections. A map of the city that shows first and second priority streets can be found at https://gis.flagstaffaz.gov/portal/apps/storymaps/stories/efeb74300b2d4520b2f30731412c604e.

Plowing all 700 lane miles of the transportation network takes time and the city is requesting community patience, as all areas will be plowed in the order listed above. The anticipated significant accumulation and duration of the upcoming snow events will likely lead to some delay working into the neighborhoods until later in the storm event. All available resources will be devoted to snow operations during the entire week of Jan. 25.

The city requests that no one parks on the streets in compliance with the Winter Parking Ordinance. There is no parking on city streets or alleyways from midnight to 7 a.m. from Nov. 1 to April 1. Compliance with the ordinance allows Streets Section crews to thoroughly plow streets for safe travel and aids street sweepers in the removal of cinders following a snowstorm.

Additional snow and ice operations information is available on the City of Flagstaff website at https://www.flagstaff.az.gov/176/Snow-Ice-Operations.

With onset of snow, forest roads across northern Arizona close

With the arrival of snow and wet weather, the Coconino National Forest is closing a number of forest roads across the Flagstaff and Mogollon R…

A train roars through downtown Flagstaff heading east Tuesday afternoon as snow blankets the area. Another storm is expected to drop 18-36 inches of snow in Flagstaff this weekend.

This image, shared on Friday afternoon by the National Weather Service in Flagstaff, shows the two incoming storms predicted to bring significant snowfall to northern Arizona in the coming days.