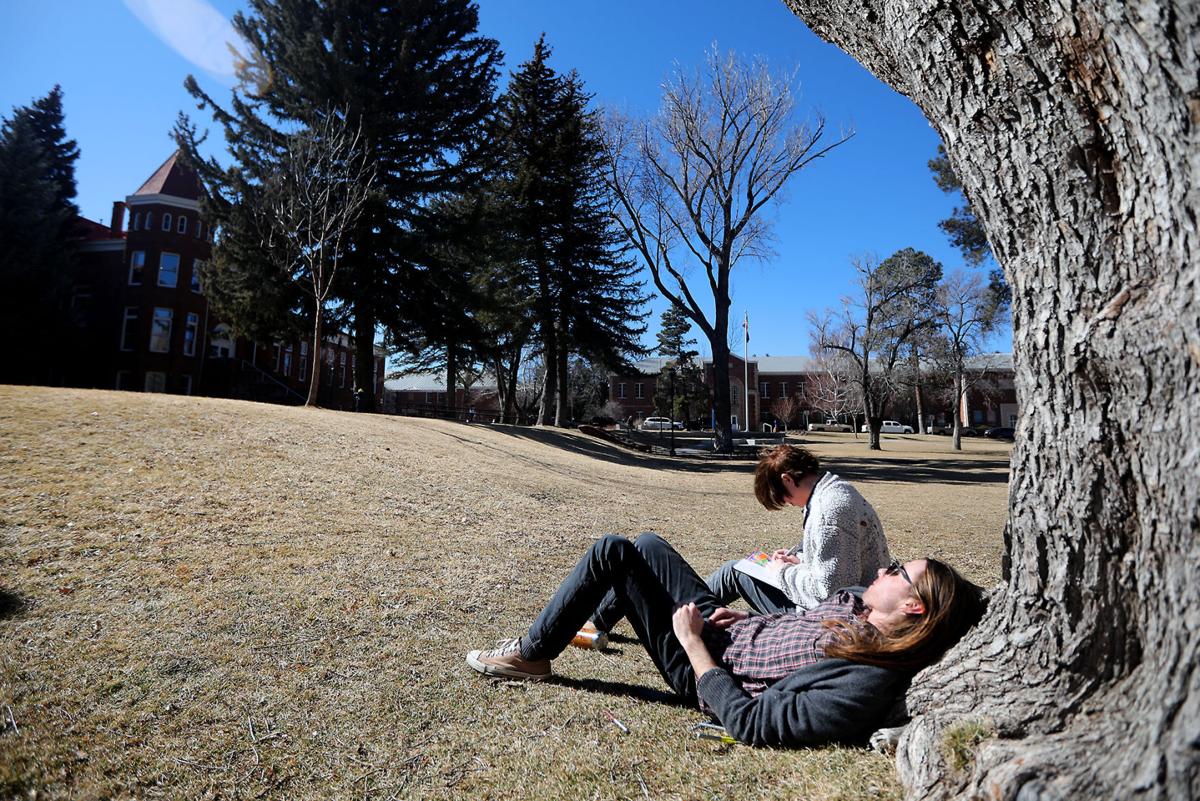 Kenny Grose, right, and Celestina Christianson relax in the sun Thursday afternoon in front of Old Main on the Northern Arizona University campus. This time last year the pair would have been under several feet of snow if they had been in the same spot on Feb. 21. 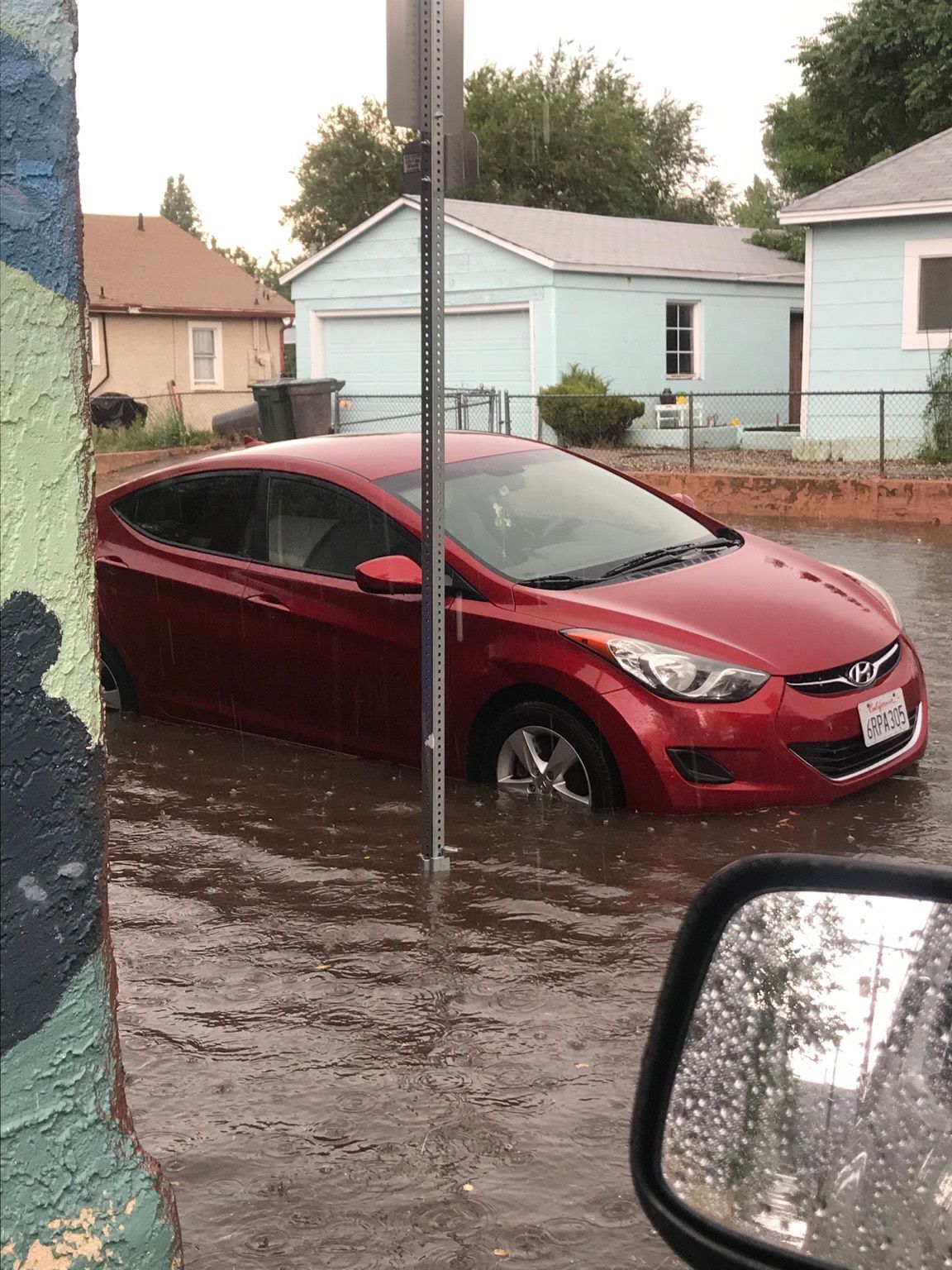 Monsoon rain pools near South San Francisco Street on Friday afternoon. A sudden storm brought welcome relief to Flagstaff after six straight days of record high temperatures from Aug. 14-19. The National Weather Service in Bellemont has much more in store for the upcoming week, with daily chances of precipitation between 20 and 50 percent through next Friday.

It may violate some unwritten year-in-review story rule, but by far the most significant weather event in Flagstaff in 2020, with potentially dire consequences for the future, was something that did not happen.

That is, the monsoon season mostly didn’t take place — again. We experienced the driest monsoon season in 122 years of kept records this past summer, eclipsing the previous driest from … 2019. That development, coupled with a mild winter with significantly less snowfall than usual (4.6 inches through late December, well below the 16.8-inch average), and you have pretty much all you need to know about 2020, meteorologically speaking.

The year in science was much more eventful, with noteworthy news and events both in fighting the COVID-19 crisis and in the astral realm and beyond, with a focus on Mars projects. Here’s a recap of the top local weather and science stories:

For the second summer in a row, the monsoon was a bust. Flagstaff only received 1.78 inches compared to the normal 8.31 inches measured at the Flagstaff Pulliam Airport. This year was the driest monsoon in 122 years of recorded data, according to Dan LeBlanc, meteorologist with the National Weather Service.

This year's dryness even beat out last year's monsoon, which was then hailed as the driest in recorded history. In addition to dry conditions, the region has also seen record heat throughout the state.

LeBlanc said the weather service has seen a high pressure system set up above Arizona, instead of the Four Corners region, meaning the state didn't get its expected eastern and southerly winds that help bring the summer thunderstorms.

Peggy Pollak always knew she wanted to be a farmer, and in retirement she's been able to put…

The region's extreme heat did little to help the increasing drought conditions. The Southwest recorded the second-driest April through July period on record this year. Arizona had the hottest July on record. Flagstaff, like many towns in northern Arizona, saw multiple daily heat records set over the past few months.

National Weather Service measurements at Flagstaff Pulliam Airport only collected 1.47 inches of rain in July — well below the month's normal 2.6 inches of rain. August normally receives 2.65 and only had .31 inches.

Flagstaff, like much of the West, has seen drought conditions persist or worsen in August.

The Arizona COVID-19 Genomics Union was formed in April to track the movement of the SARS-CoV-2 virus and includes representatives from the Translational Genomics Research Institute (TGen), Northern Arizona University, the University of Arizona and Arizona State University. Together, they used supercomputers to sequence the virus’s RNA genome in positive patient samples and search for different lineages with origins in areas throughout the world.

The group’s findings on the early pandemic in Arizona were published in the scientific journal mBio. By sequencing the genomes from 84 COVID-19 patient samples collected early in the Arizona outbreak, scientists determined there was no widespread transmission in Arizona until early March, more than a month after a student returning from Hubei, China, the province where the disease originated, became the state’s first case — and later, the ACGU’s first sample.

Through the sequencing process, scientists looked for mutations in the virus, which occur naturally as it reproduces, and compared them to other Arizona cases and an international database recording different strains of the virus.

Lowell Observatory astronomer Kyler Kuehn was one of the collaborators on an international project that published its discovery of a new type of star cluster.

The Southern Stellar Stream Spectroscopic Survey (S5) is studying stellar streams — former clusters of stars that have been pulled apart by the gravity of the Milky Way — throughout the Southern Hemisphere, in order to weigh the Milky Way, which is not uniform due to the presence of objects like dark matter.

When measuring the speed of a stream in the Phoenix constellation using the Anglo-Australian Telescope in New South Wales, Australia for S5, though, the University of Sydney’s Zhen Wan and his supervisor, Professor Geraint Lewis, noticed that the stars had a different composition than other stars that once formed clusters.

According to the study, published in Nature on July 29, the Phoenix stellar stream did not meet the “metallicity floor,” the minimum amount of metal elements that seemed needed for globular clusters, a spherical grouping of hundreds of thousands of stars, to form.

It sometimes only takes one example to disrupt a theory, says Lowell Observatory astronomer …

The latest Mars rover, Perseverance will be able to explore rugged areas of the planet previously deemed off limits, thanks to precise and intricate mapping technology developed by United States Geological Survey scientists in Flagstaff and implemented onboard Perseverance, which is expected to touch down on the red planet on Feb. 18, 2021.

USGS research geophysicist Robin Fergason and her cohort spent two years mapping just the right spot for the rover to land inside Mars’ Jezero Crater, a 28-mile-wide former river delta. Their high-resolution mapping of the terrain will combine with real-time images taken by the rover as it descends to guide the craft to a safe, smooth site.

They will not find out until next February’s touchdown whether their precise calculations yielded success, But Fergason, who has been mapping sites for NASA since 2003, knows this much: “I don’t think anyone can make a better map than what we did.”

Helping the Mars rover gets its bearings

Mapping Mars, once terra incognita to scientists and researchers, no longer remains such a m…

Northern Arizona University planetary scientist Christopher Edwards helped design one of the three instruments used in the Emirates Mars Mission’s Hope Probe, the first Arab mission to Mars, which launched July 19. The probe is designed to study the Martian atmosphere at different times throughout its day and seasons.

Edwards joined a team of hundreds of other individuals from throughout the world who spent years in development in preparation for the launch. Edwards, instrument scientist for the project, worked alongside ASU’s Philip Christensen, with the School of Earth and Space Exploration (where Edwards attended graduate school), to create the Emirates Mars Infrared Spectrometer (EMIRS) for the probe. This spectrometer breaks up the spectrum of light to about 100 microns — “about the diameter of your hair,” Edwards said — and then into hundreds of even smaller chunks in order to analyze the energy coming from the Mars surface.

Seven months of cruise time may seem like the opportune moment for a break, but not for the …

Schuyler Borges, doctoral student in NAU’s Department of Astronomy and Planetary Sciences, assisted adviser Mark Salvatore on his research using satellite images to study Antarctic microorganisms for comparison to Martian satellite observations. The three-month trip sparked other findings, as well, including the data Borges is using for their own research on possible life on Mars, which was awarded a fellowship from the National Science Foundation in April.

Before even starting at Northern Arizona University in 2018, Schuyler Borges received an une…

A team of scientists, engineers and other specialists in Maui, Hawaii, including two former Flagstaff residents, Charlie White and Heather Marshall, are working on creating the world’s largest solar telescope.

Marshall she joined the solar telescope project remotely from Flagstaff in 2009 and, five years later, the couple moved to Hawaii for the project, where Marshall created design specification documents. She is now the project’s integration, testing and commissioning manager. White joined the project in 2015 as a controls engineer programmer for the telescope’s thermal systems.

Contrary to parental and medical warnings not to look directly at the sun, a team of scienti…

Kenny Grose, right, and Celestina Christianson relax in the sun Thursday afternoon in front of Old Main on the Northern Arizona University campus. This time last year the pair would have been under several feet of snow if they had been in the same spot on Feb. 21.

Monsoon rain pools near South San Francisco Street on Friday afternoon. A sudden storm brought welcome relief to Flagstaff after six straight days of record high temperatures from Aug. 14-19. The National Weather Service in Bellemont has much more in store for the upcoming week, with daily chances of precipitation between 20 and 50 percent through next Friday.