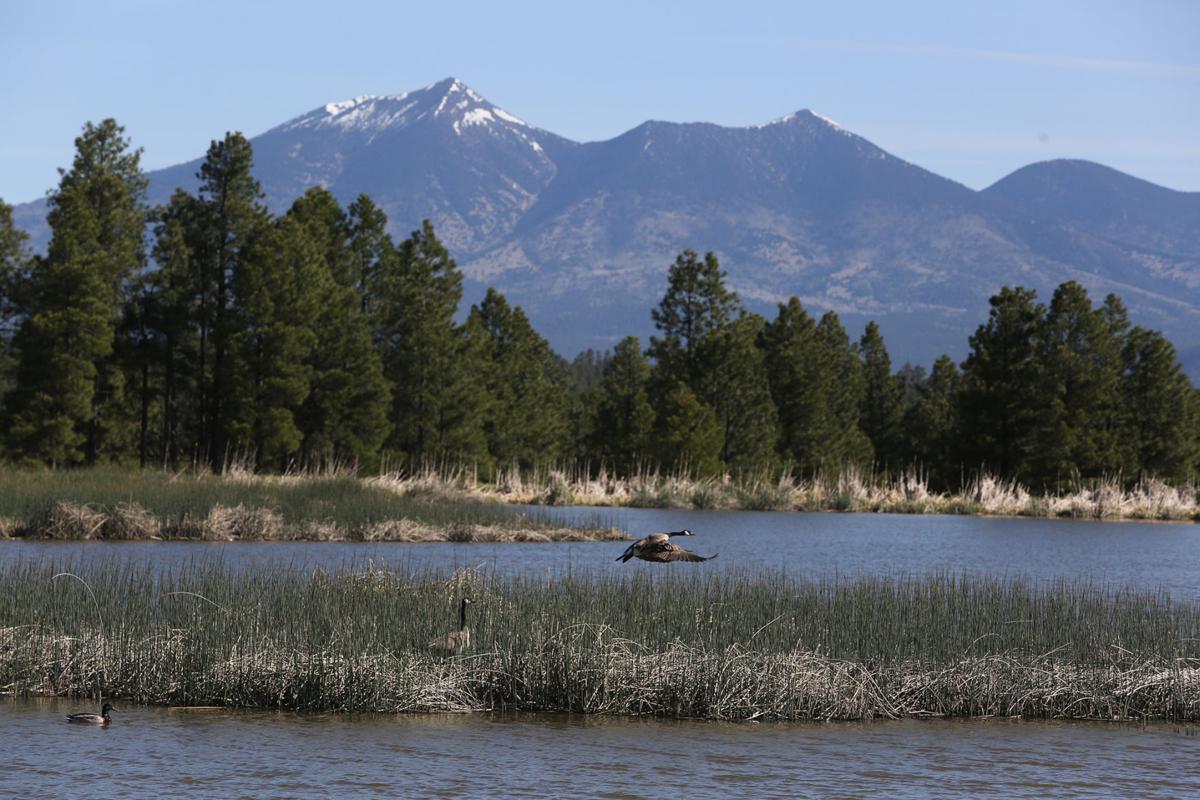 A Canada goose sits in an island of bullrushes as another takes off Wednesday morning at the Kachina wastewater evaporation ponds. For more photos, see Page A8. 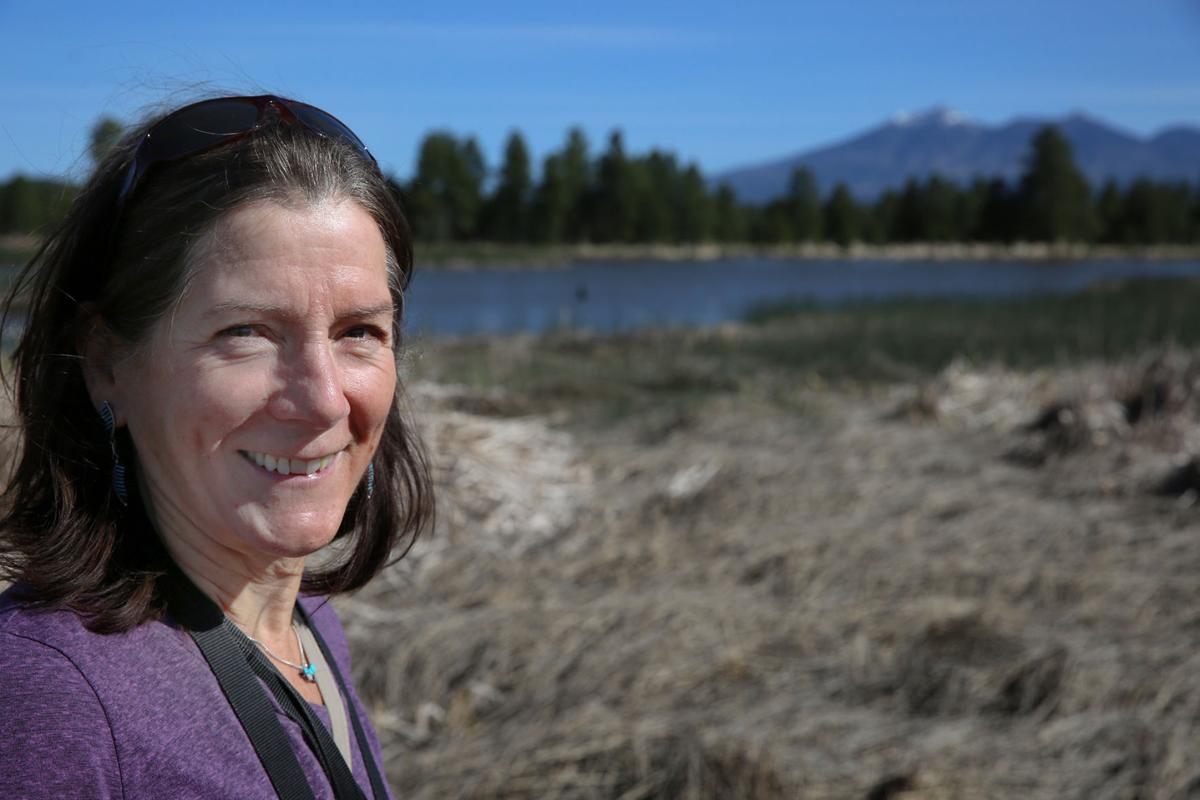 Christina Vojta is a steward of the Kachina Wetlands bird preserve for the Northern Arizona Audubon Society. The two ponds that are central to the wetlands serve as evaporation ponds for treated wastewater from the Kachina Village Improvement District, but Vojta is working to enhance the wetlands area as bird habitat and for recreation and education. 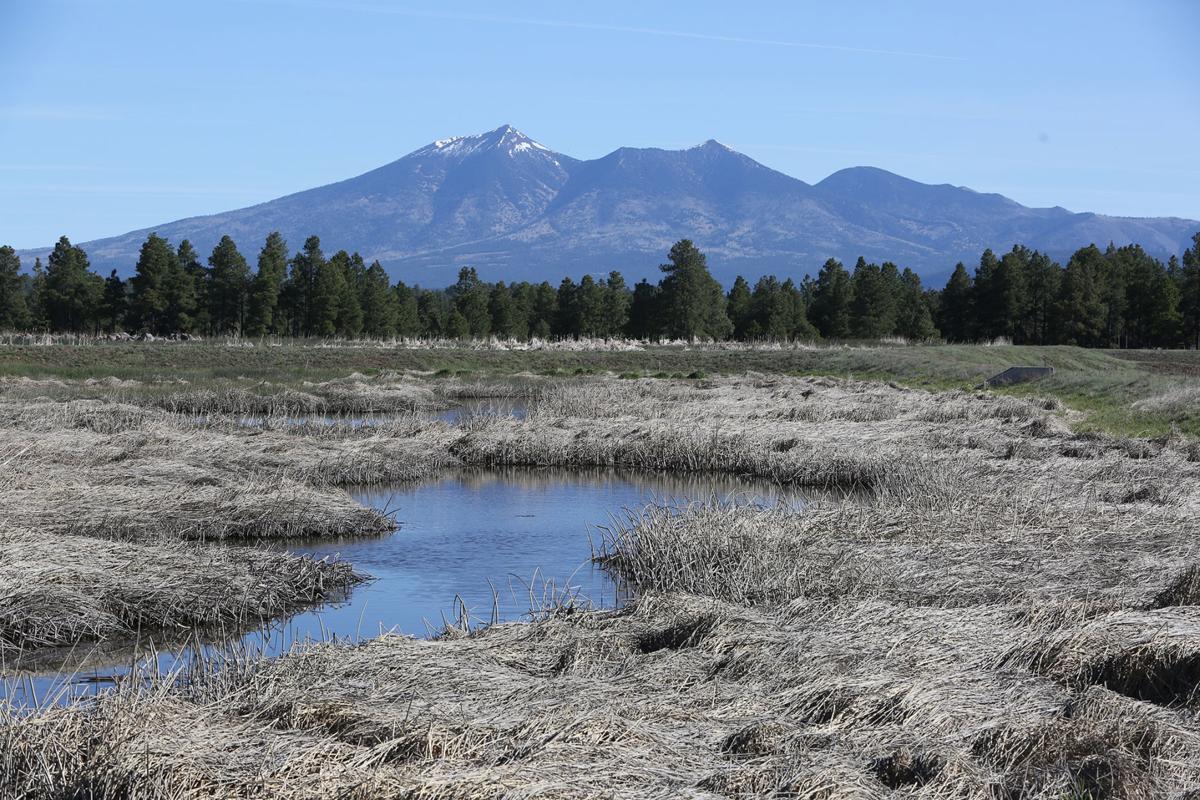 The San Francisco Peaks tower above the Kachina Wetlands, a series of evaporation ponds for treated wastewater north of Kachina Village that have become a hotspot of bird biodiversity. 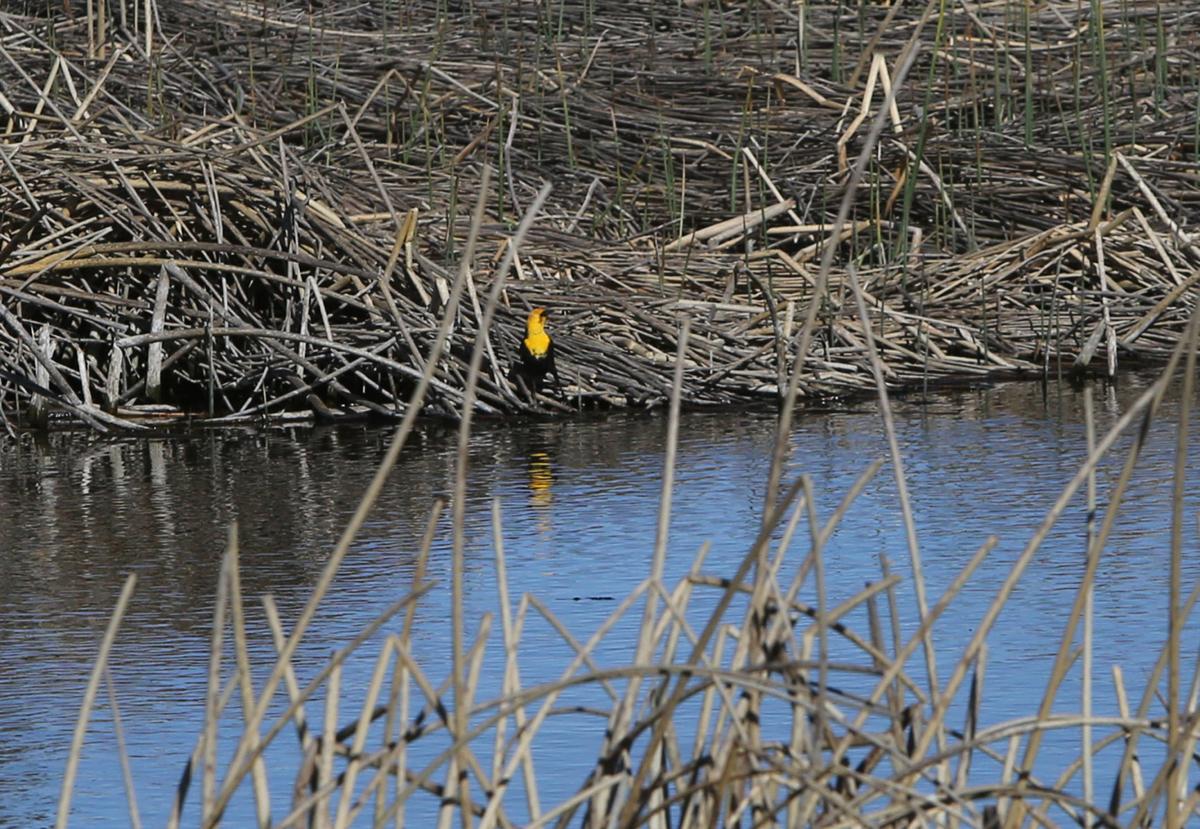 A yellow-headed blackbird sits by the waters edge Wednesday morning at the Kachina Wetlands. 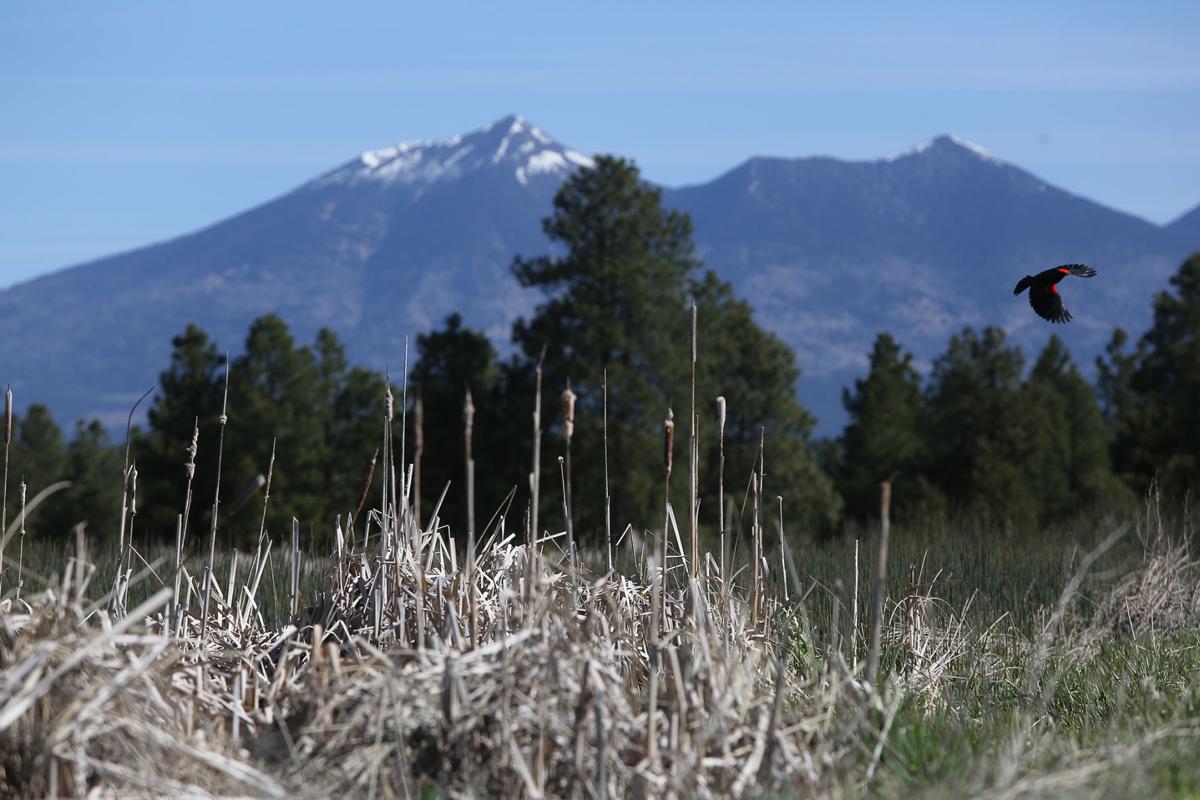 A Canada goose sits in an island of bullrushes as another takes off Wednesday morning at the Kachina wastewater evaporation ponds. For more photos, see Page A8.

Christina Vojta is a steward of the Kachina Wetlands bird preserve for the Northern Arizona Audubon Society. The two ponds that are central to the wetlands serve as evaporation ponds for treated wastewater from the Kachina Village Improvement District, but Vojta is working to enhance the wetlands area as bird habitat and for recreation and education.

The San Francisco Peaks tower above the Kachina Wetlands, a series of evaporation ponds for treated wastewater north of Kachina Village that have become a hotspot of bird biodiversity.

A yellow-headed blackbird sits by the waters edge Wednesday morning at the Kachina Wetlands.

The sing song of bird chatter filled the air as Christina Vojta walked along a dirt path that winds through the Kachina Wetlands. Despite being bordered on all sides by development — Kachina Village to the south, Forest Highlands to the west and north and Interstate 17 to the east, the ponds that make up the wetlands area team with bird life. Red-winged blackbirds flit between cattails, small Cinnamon Teal ducks bob in a shallow pond and a dark-collared killdeer perches on a dried mud flat.

The wetlands, which are actually manmade evaporation ponds for treated wastewater from the Kachina Village utility, have become one of the area’s most important hotspots for bird diversity. So far, more than 200 bird species have been seen here, according to the citizen-based bird tracking website eBird.

While the ponds' primary purpose continues to be storage and evaporation of treated wastewater, Vojta is working with the Kachina Village Improvement District to improve the 70-acre area's function as both wildlife habitat and a recreation area.

“Why make it be just a single use area?” Vojta said.

They are doing so thanks to county, state and federal grants that will help remove invasive weeds from the area, build a viewing walkway and interpretive signs and create a pollinator garden on site.

On Saturday, the Northern Arizona Audubon Society will host an event on the property celebrating International Migratory Bird Day that will include bird walks, opportunities to look through spotting scopes operated by expert birders and other activities.

Efforts to make the Kachina Wetlands into more than a group of evaporation ponds started with William Gaud, a biology professor at Northern Arizona University. In the early 1990s, thanks to grants from the Arizona Game and Fish Department and Ducks Unlimited, Gaud transplanted aquatic plants like bulrushes, cattails and willows from local wetlands to the shorelines of two ponds and planted native shrubs on pond islands.

Along with the grant money, Arizona Game and Fish also entered an agreement with the Kachina utility to maintain pond levels at certain depths to ensure they would continue to provide adequate habitat into the future.

Nothing has been done since then to further improve the area though, Vojta said.

Vojta, who is a birder, was a frequent visitor to the wetlands and noticed invasive plants were beginning to become pervasive around the ponds. With a background in wildlife ecology, she wanted to help. That initial desire has led her to become involved with several projects involving the wetlands.

Knowing the area’s value as bird habitat, for example, she contacted the Audubon Society about it. That resulted in the group deciding last year to designate the area a bird sanctuary, or a place where the organization will spend time learning and educating others about the birds, Vojta said.

She also wrote up a 10-year management plan for the enhancement of the Kachina Wetlands that outlines goals of reducing and controlling invasive weeds, enhancing wildlife habitat and enhancing the area’s aesthetic value and educational potential.

In addition to being a popular destination among birders, the area’s two miles of trails are frequently used by people running, biking and walking their dogs.

That plan authored by Vojta has helped Coconino County and the Kachina Village Improvement District recently win a trio of grants to improve the area.

One two-year grant from the Arizona Department of Forestry and Fire Management, with matching funds from Coconino County, will pay for invasive weed removal and the planting of native plants along the ponds' shorelines, Vojta said. A second chunk of money awarded to the Kachina Village Improvement District that combines funds from Arizona Game and Fish Department and from the Audubon Society, will allow for the construction of interpretive signs and a walkway that will extend into the deeper pond for bird viewing.

The U.S. Fish and Wildlife Service is providing a third source of funding to help local groups, including the nonprofit Terra BIRDS, create a pollinator garden focused on monarchs at the south end of the property this summer.

The loss of wetlands to agriculture and development nationwide, makes projects like the one at Kachina Wetlands more important than ever for birds, Vojta said. Migratory birds in particular rely on wetlands as stopover areas, but over the 200 years between 1780 and 1980, the lower 48 states lost an estimated 53 percent of their original wetlands, according to a U.S. Fish and Wildlife Service report. Vojta said at least 65 species of birds spotted at the Kachina site are reliant on wetlands.

In the future, Vojta and Sam Mossman, manager of the Kachina Village Improvement District, said there likely will be more water that will fill at least one more of the nine total ponds on the property. Maintenance planned for this summer on one pond will help retain more treated wastewater and a new residential development in the works on the north end of Kachina Village will likely lead to more wastewater flowing through the treatment system, Mossman said.

The water is Class B reclaimed wastewater, meaning it is not safe for any types of reuse that carry a high potential for human exposure. It is, however, allowed for a variety of uses including livestock watering by the Arizona Department of Environmental Quality.

The ponds are not connected to, nor does the reclaimed water drain into the spring-fed Pumphouse Wash wetlands area at the southwest edge of Kachina Village, Mossman said. All of the water is stored in the ponds until it evaporates.

Mossman said the utility is putting more of a focus on the pond area's function as habitat and a multiuse area and is working on a plan to revitalize the site.

Vojta emphasized the importance of the improvement district being a willing landowner that sees value in using its property for people’s enjoyment and wildlife habitat.

As for Vojta herself, she said she is driven to volunteer her time by the reward of seeing tangible results from her work.

“I wanted to put my heart somewhere and this is an easy place to want to spend effort,” she said.

Wastewater ponds now for the birds

A series of evaporation ponds for treated wastewater have become a hotspot for bird biodiversity in northern Arizona. Now, several efforts are…

The Northern Arizona Audubon Society will hold an event to celebrate International Migratory Bird Day on Saturday from 8 a.m. to 2 p.m. at the Kachina Wetlands, located at the north end of Tovar Trail in Kachina Village.

The event is free and open to the public and includes bird walks at 8 a.m. and 10 a.m., a spotting scope, a live hawk demonstration, activities for kids and information on migratory birds.

As an osprey emerges from a pond and flicks water off its feathers, Thomas Hedwell points to the gold color sticking from its talons.

Leave it & the birds alone. Don't start killing so-called invasive plants, making it a place for 'human enjoyment,' encroaching & developing on every last speck of an undisturbed piece of land some person happens to lay eyes upon. Let the birds in peace, no machinery, pesticide plant killer chemicals, nature left alone will work it out, stay out for God's sake.