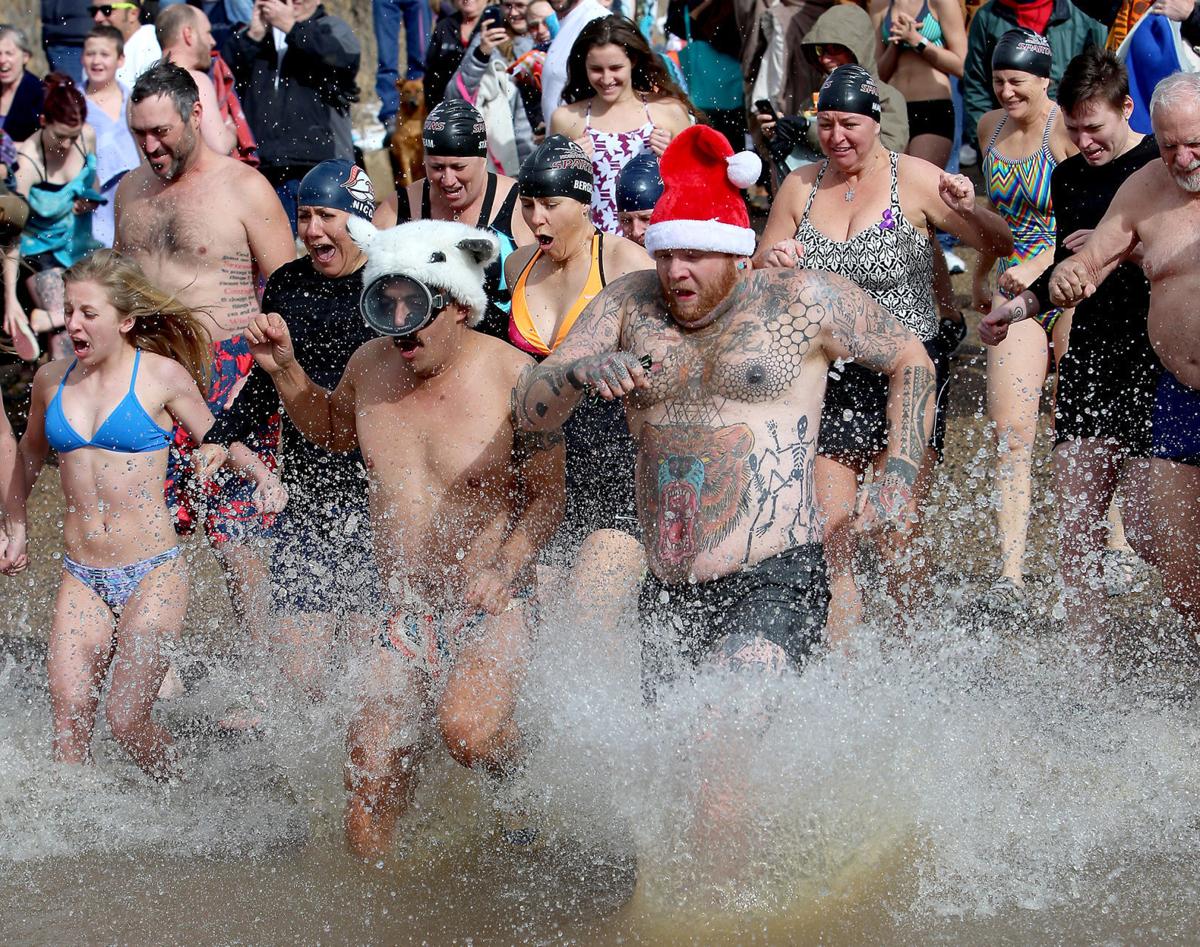 The shock of being completely immersed in the freezing water of Upper Lake Mary is clearly visible on the faces of the 2017 Annual Polar Plunge participants. The 2020 iteration takes place on Wednesday, Jan. 1. Photo by Jake Bacon 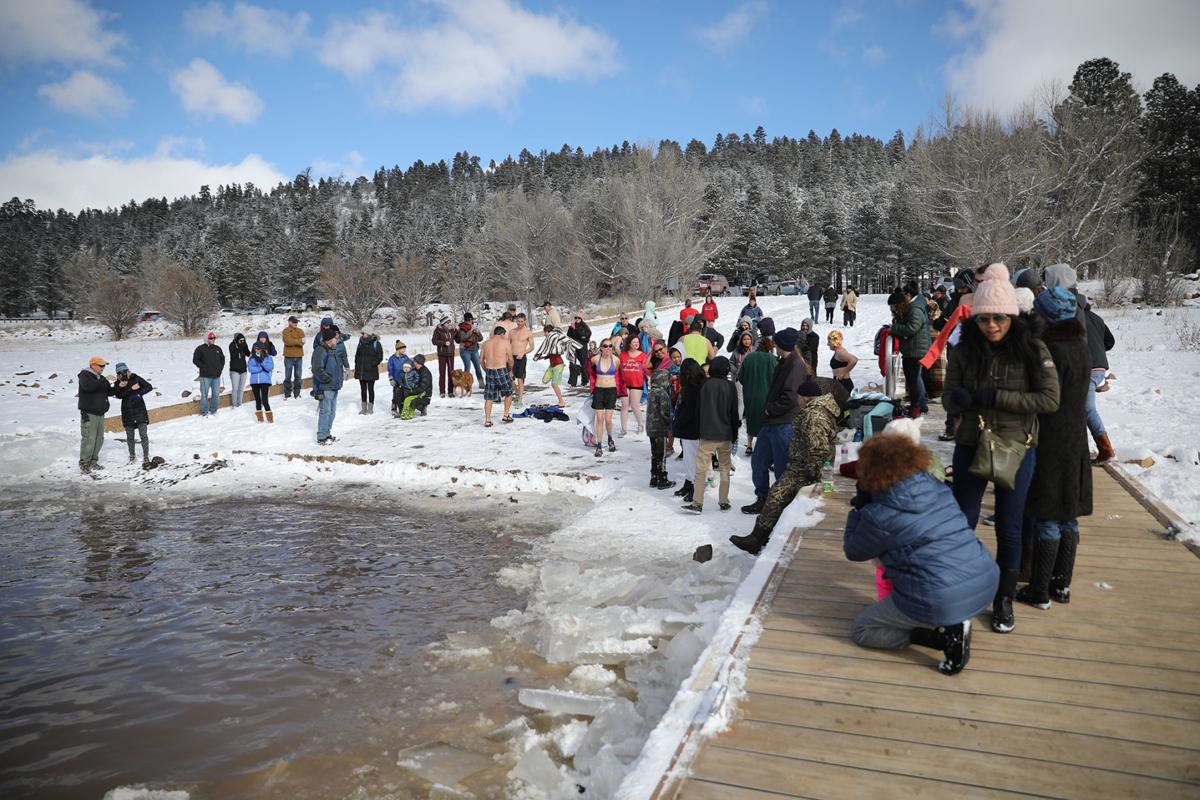 Spectators and participants in the 2019 Polar Plunge celebrated the New Year Tuesday at noon on the boat ramp at Upper Lake Mary. More than 50 brave souls dared to take the plunge as their friends and family watched from the shore. 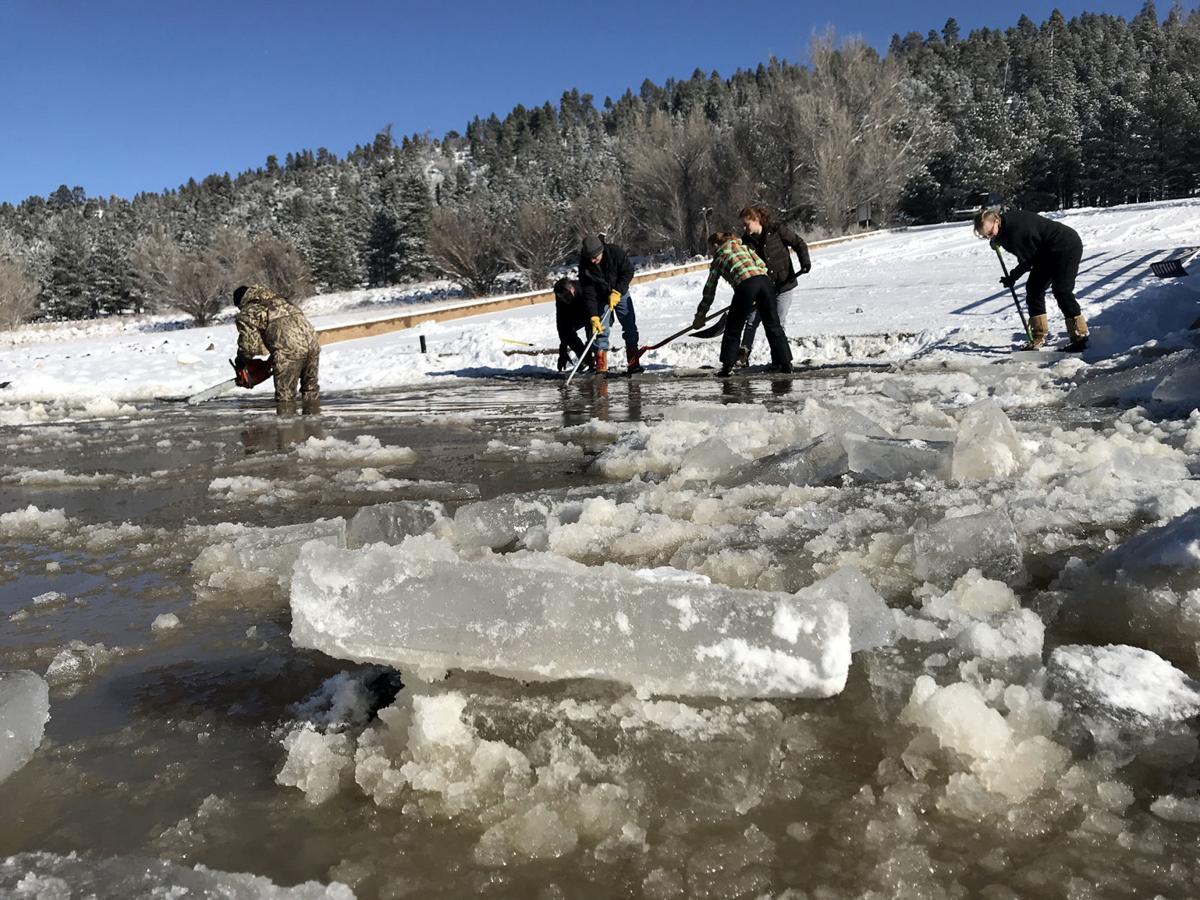 A team of volunteers works with an chainsaw, rakes and shovels to remove slabs of 3-inch-thick ice from the bottom of the boat ramp at Upper Lake Mary Tuesday morning in preparation for the annual Polar Plunge. 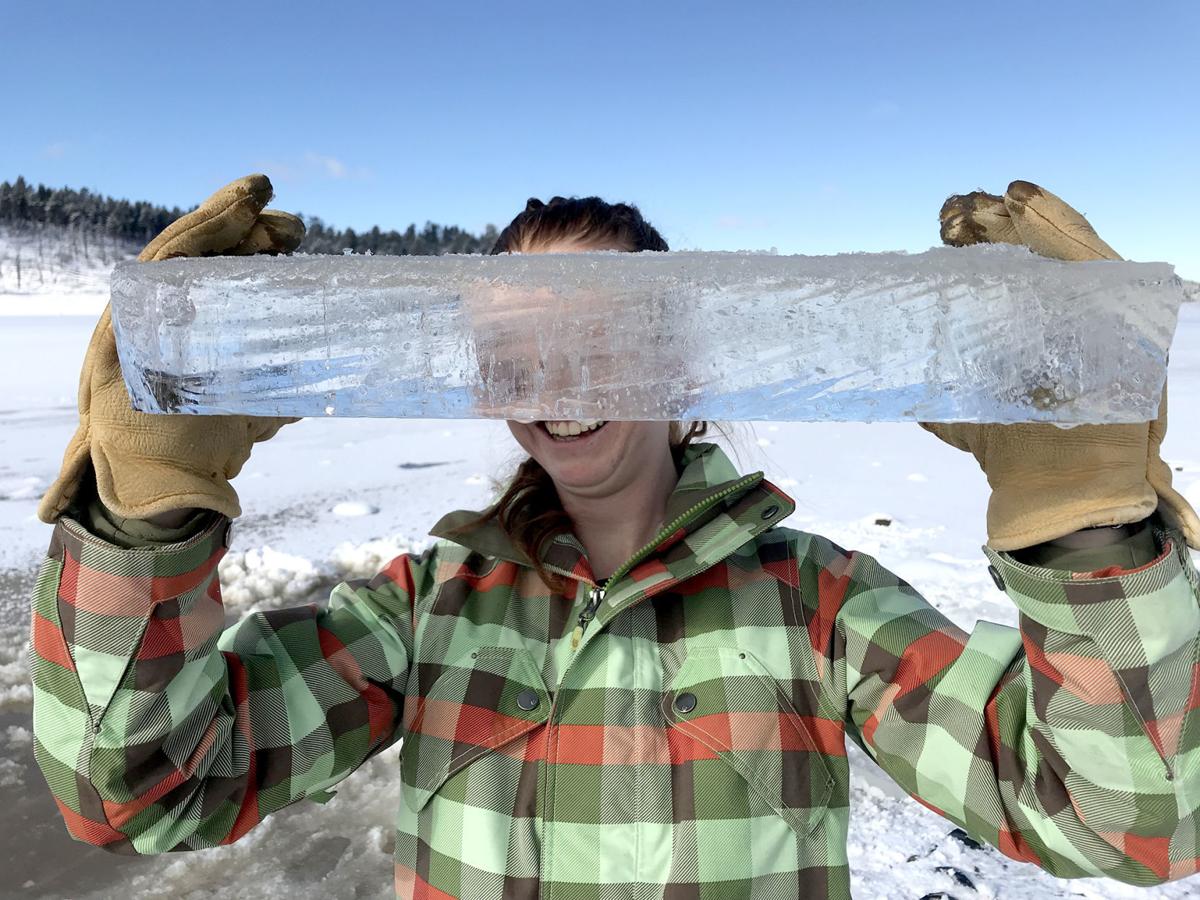 Sophia Capalby holds a 3-inch-thick section of ice on New Year's Day while helping to cut a plunge pool in the ice at Upper Lake Mary for the 2019 Polar Plunge. The event was continued in memory of former Daily Sun editor Randy Wilson, who passed away in 2018. 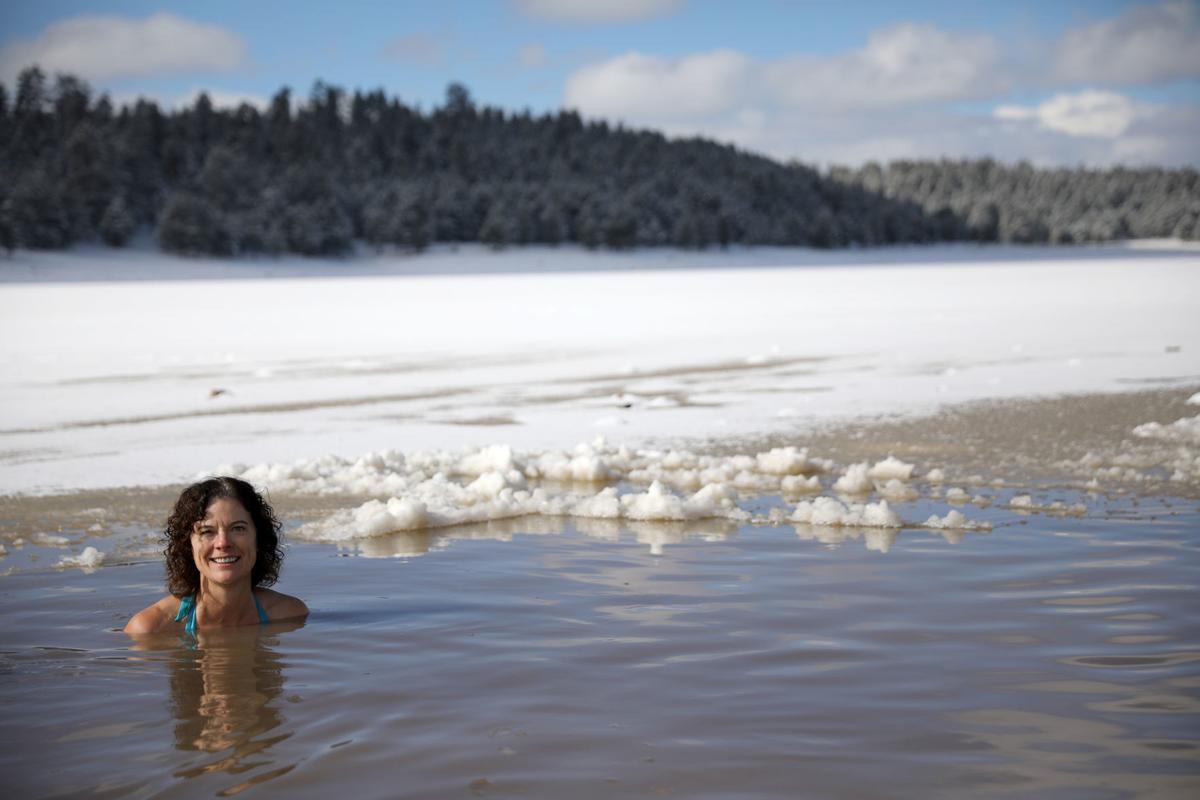 Kara Kelty soaks in the freezing waters of Upper Lake Mary Tuesday during the annual Polar Plunge to celebrate the new year. 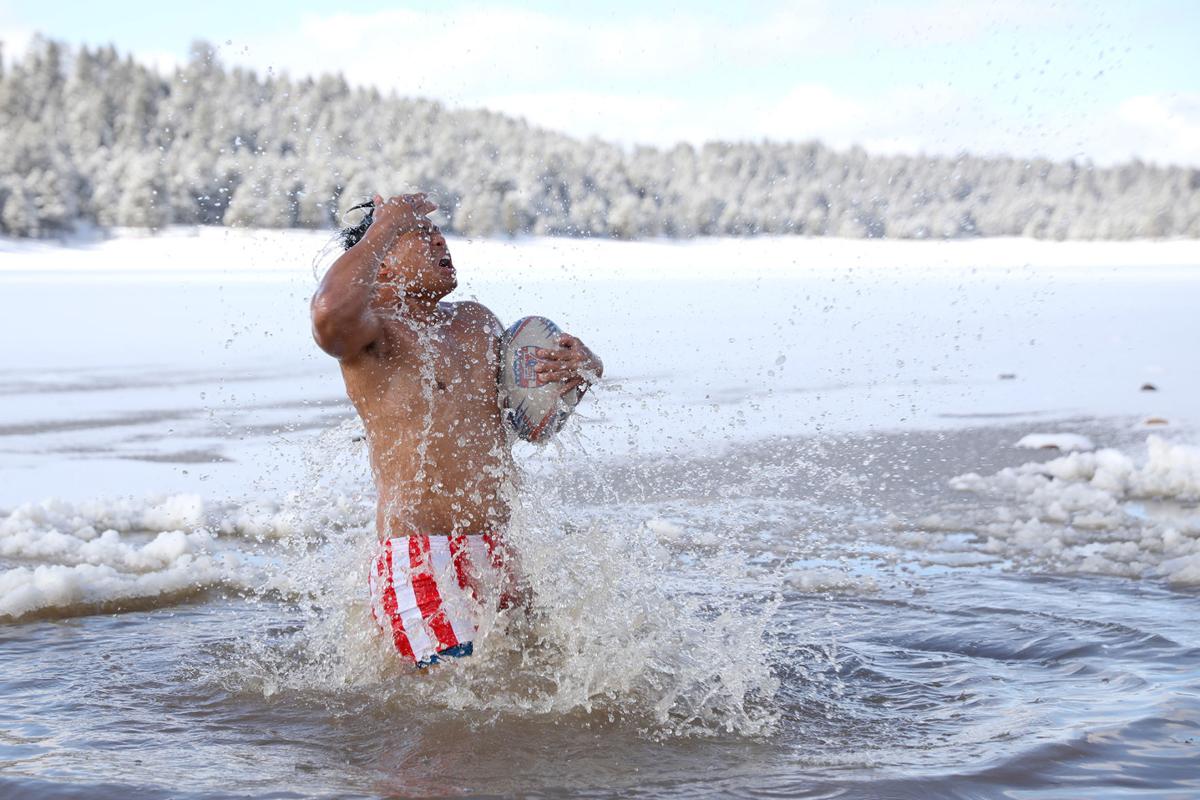 Mark Cox explodes out of the freezing waters of Upper Lake Mary as he takes the 2019 Polar Plunge to celebrate the new year. Cox was one of more than 50 people who took the plunge in 2019. 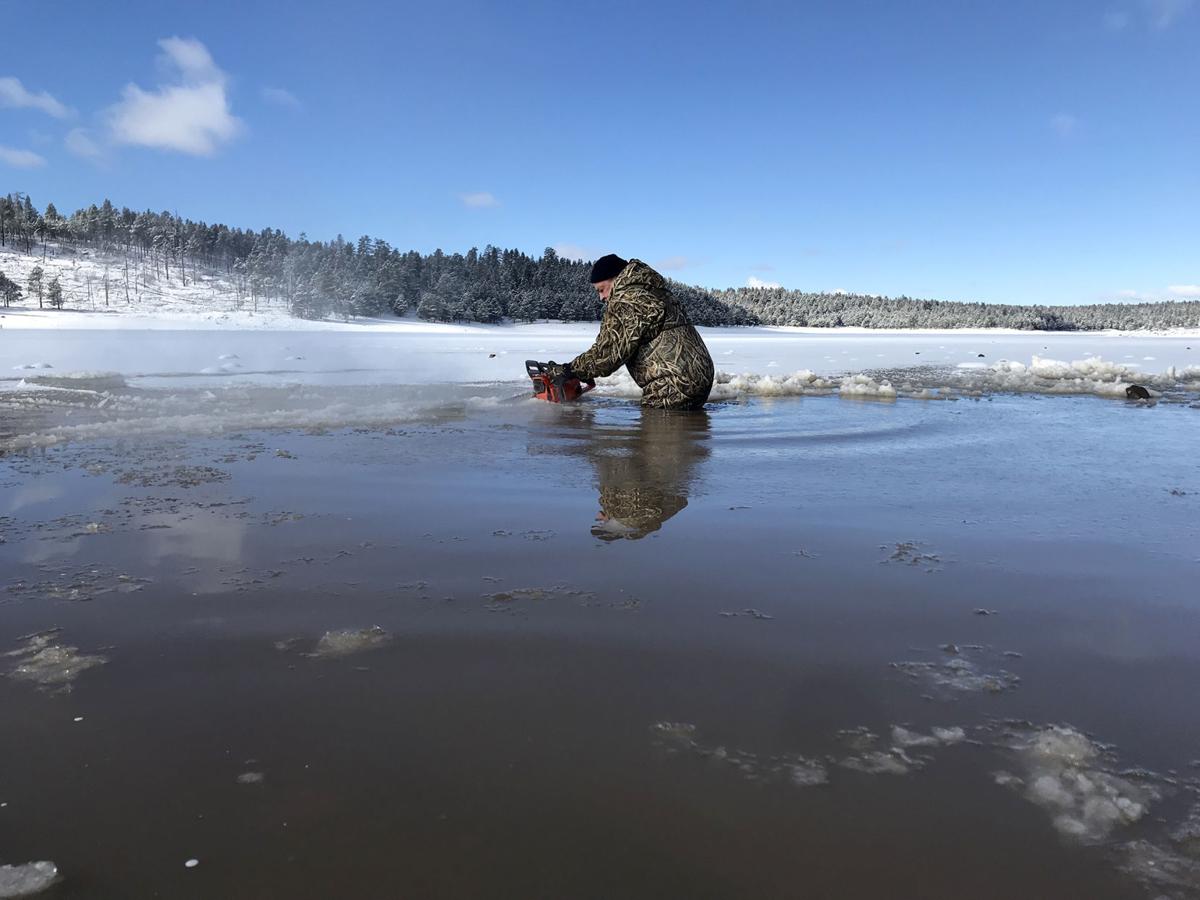 Bill Smith, production director at the Arizona Daily Sun, uses a chainsaw to cut slabs of ice from the surface of Upper Lake Mary Tuesday afternoon to create a pool for the annual Polar Plunge.

The shock of being completely immersed in the freezing water of Upper Lake Mary is clearly visible on the faces of the 2017 Annual Polar Plunge participants. The 2020 iteration takes place on Wednesday, Jan. 1. Photo by Jake Bacon

A team of volunteers works with an chainsaw, rakes and shovels to remove slabs of 3-inch-thick ice from the bottom of the boat ramp at Upper Lake Mary Tuesday morning in preparation for the annual Polar Plunge.

Bill Smith, production director at the Arizona Daily Sun, uses a chainsaw to cut slabs of ice from the surface of Upper Lake Mary Tuesday afternoon to create a pool for the annual Polar Plunge.

More than 50 people started the New Year with a bracing plunge into the muddy water of Upper Lake Mary at midday on Tuesday.

In several small groups of six or fewer, and sometimes all alone, participants in the annual Polar Plunge gingerly walked to the edge of a pool cut by chainsaw from the ice cap covering the lake as a crowd called out encouragement from the shore.

The event, which has taken place since 2011, was the brain-child of late Arizona Daily Sun Editor Randy Wilson, who told tales of starting the new year by jumping through the ice into a frozen river in Maine.

Each year Daily Sun employees joined Wilson early on New Year's Day to clear a way into the lake and wait on the boat ramp to see how many brave souls would heed the call to start a new year with a Polar Plunge.

Some years the ice was thick enough to drive a car on and would be cut out in 8-inch-thick bricks to be stacked in piles next to the plunge pool. Rarely, brave participants would arrive at the lake edge to be greeted by sunshine, unseasonably warm temperatures and a complete lack of ice.

On this New Year's Day, Bill Smith, who normally runs the printing presses that create each day's newspaper, arrived to find three inches of ice capped by another six inches of light, fluffy snow. As he started work on cutting the pool, the thermometer was stuck at 6 degrees. With a high forecast for 25 degrees, the day had all of the makings for a truly epic plunge.

The temperature was so low that as briefcase-sized blocks of ice were cut away from the cap to reveal a growing pool of clear water, that pool would quickly rime over with the beginnings of fresh ice.

As the pool grew ever larger under the whine of the chainsaw, the thin mountain air started to take on an unusual smell. Sitting next to the spare tank of gas for the saw was a bottle of canola cooking oil.

“I just happened to be watching a documentary on homesteading,” Smith said. “Trees were being felled to build a log cabin and the future owner of the cabin was a bit of an environmentalist who said that the sawyer couldn’t use chainsaw oil on the trees being cut for his home. The sawyer instead used cooking oil. In past years I’ve not used oil in the saw when I cut the ice, so I would have to stop to let the chain cool down. I realized this year I could use cooking oil and it would let the saw run without polluting the lake.”

When it came time to take the plunge, some participants ran in and squatted down for complete immersion followed by a mad dash back to shore for warm towels and clothes. Others from hardier, or simpler, stock walked out into the pool and sat with only their heads exposed, soaking in the chill before ducking completely under to emerge fully soaked for the new year.

As requested, those wishing to join the fun brought nonperishable food items and a large crate of tins and boxes of food was collected on the shore to be donated to the Flagstaff Family Food Center.

No matter the joys and sorrows or trials and tribulations of the coming year, there will once again be a pool of water waiting for those who want to enter 2020 with a slate washed clean(ish) with the icy and muddy waters of the lake.

Rhonda Bizardi doesn’t usually stay up until midnight on New Year’s Eve. But this year, the birth of her daughter caused her to stay up much l…