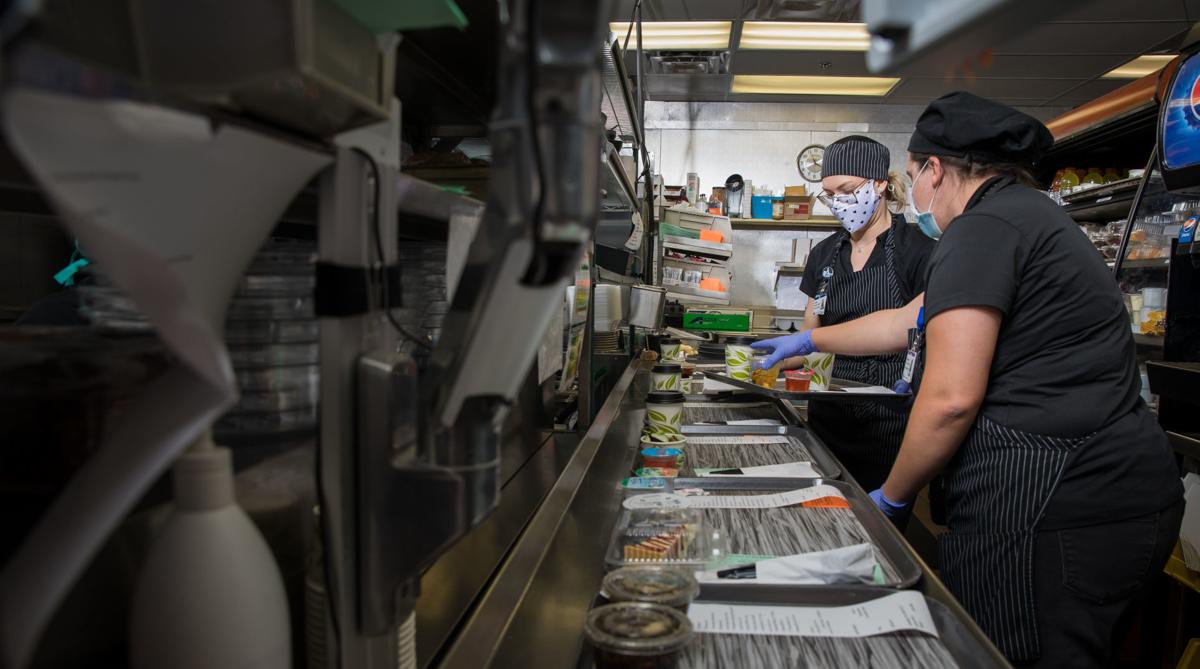 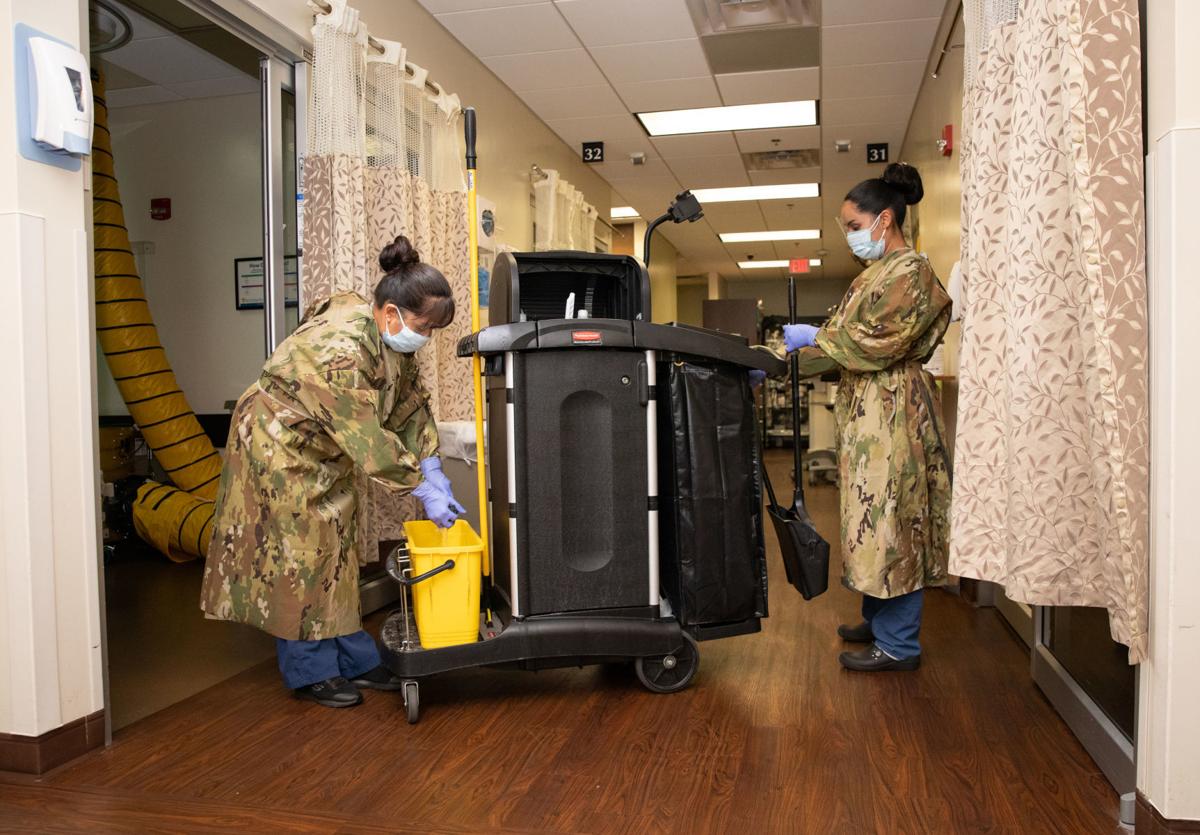 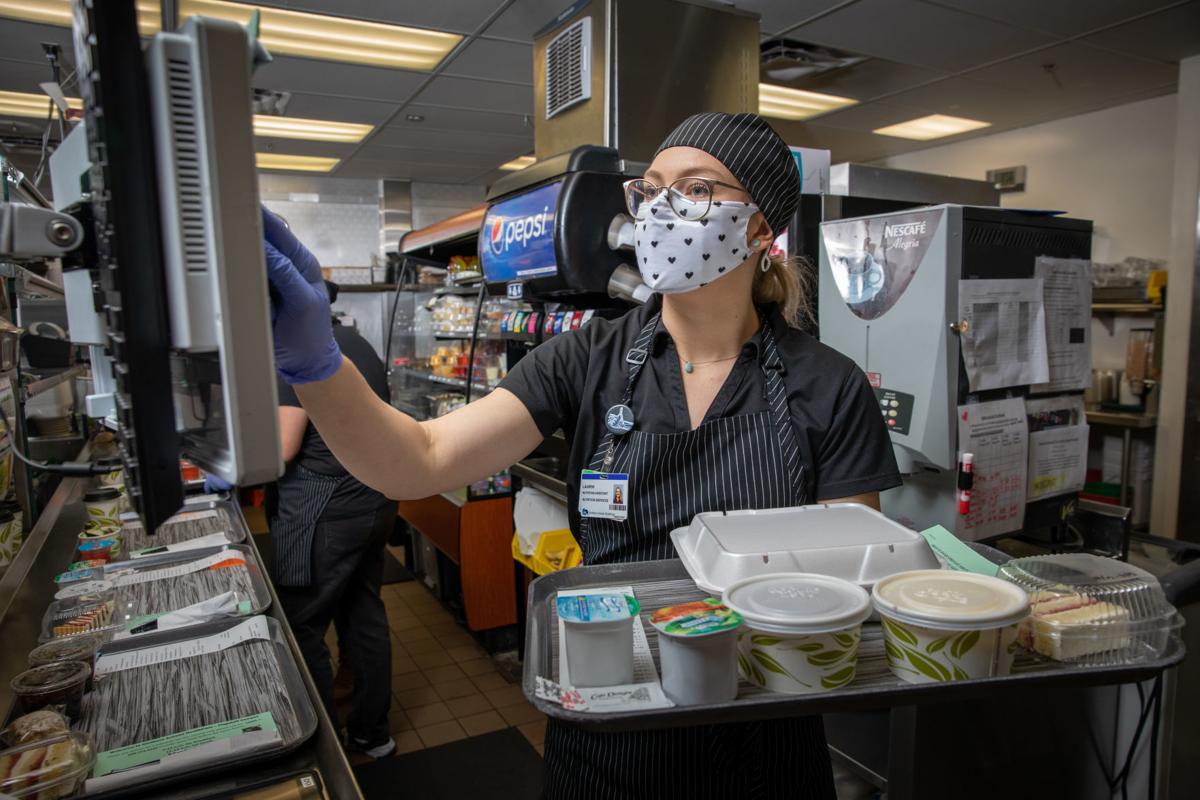 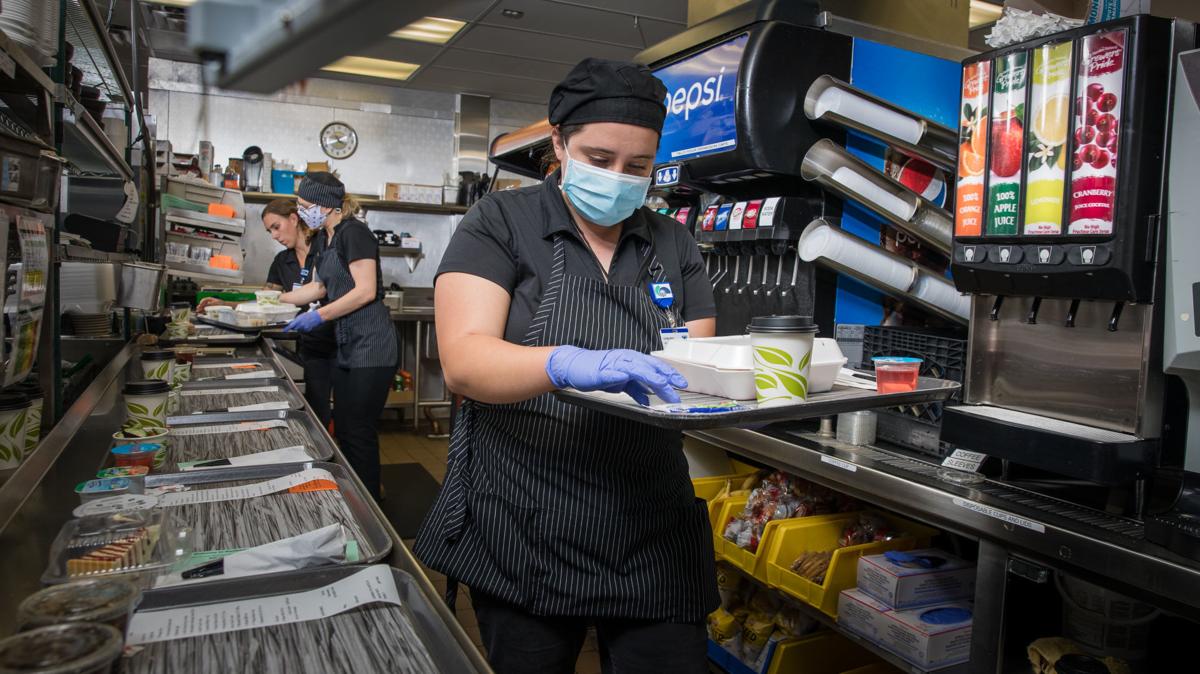 When Chyna-mae Sablan, a nutrition assistant at Flagstaff Medical Center, exits the hospital through the kitchen, she always looks to the ground and smiles.

Outside the door is a rock on which someone painted the words “you rock.” It’s a small thing to celebrate, Sablan admits, but when times are tough, she believes people have to look for the things that make them happy, no matter how tiny.

Sablan is one of many essential workers who spends their shifts at the Flagstaff hospital making sure patients are fed, rooms are clean and medical technology is humming soundly. Many of these essential workers are working more shifts because the fear of the virus is causing higher turnover. At work they have to don the full-body protective suits and enter COVID-19 containment units just like doctors and nurses. Many of them are working without salary and without university training on how viruses and diseases spread.

Her position as a nutrition assistant entails evaluating patients’ dietary habits and needs, providing them with guidance on food and reporting to the dietician in charge. It’s a job that often entails speaking with patients at length, as well as creating a diet specifically for them -- it is also a job that has changed a great deal since the onset of the coronavirus.

Sablan is also a mother. She drops her children, both younger than the age of 5, off at a daycare for essential workers every morning. She’s thankful the daycare stayed open for people who have continued to work. But her children don’t understand why the daycare workers check their temperatures at the door.

Like many medical workers, Sablan has had to set new distances from her children — such as stopping them from running up and hugging her when they first see her after work. Her direct contact with COVID-19 and non-COVID patients means she has to be certain she isn’t carrying the virus after she gets off of work.

“Just working at the hospital, because the patients are here, it’s not like any other job,” Sablan said.

Lauren Shacklette, also a nutrition assistant at the hospital, said she has become more accustomed to the dangers of work life, adding that the constantly changing protocols caused her a great deal of uncertainty over the past few months.

“We tend to be pretty understaffed,” Shacklette said. “We had staff getting sick. We had staff that were vulnerable to the virus and wanted to take time off for a little bit, so we had to work more jobs, take on more responsibility at one time.”

Matt Sena, vice president of operations for Northern Arizona Healthcare, which owns FMC, said he tries to “bend over backwards” to address the fears of workers who were able to stay and continue to work the past few months.

“They care for the community, care for the patient, and they want to do the right thing despite that fear. We’re proud of these folks and honored to work alongside them,” Sena said.

In many ways, the nutrition assistants, custodial staff and IT staff have also become front line workers in the time of COVID-19.

Even before the pandemic, serving three custom meals a day that fit the dietary restrictions of hundreds of patients was already a tall order.

COVID-19 has caused nutrition assistants like Sablan and Shacklette to make many changes from handling demand at the call center where patients place their orders, to what items are available for purchase and how they actually deliver the food.

There are now set schedules for nurses to deliver food trays to COVID patients. Families and friends used to order for patients who couldn’t order for themselves, but the hospital-wide restrictions on visitation means nutrition assistants have to move between the rooms to take orders for patients who can’t use the phone. Doctors and nurses in containment units must also be delivered food because of how long it takes them to remove and put on their personal protective equipment.

Nutrition staff were using bags to grab the dirty trays that they would wash and reuse, but soon realized that opening the bag would cause any germs inside to fly into the workers’ face, so they quickly did away with that hazard.

“It’s hard to get this information across to everybody. We still have times where we go and try to pick up the trays and they’re all bagged,” Shacklette said. “We have to call and tell them that’s not the protocol anymore.”

In addition to the widely known dearth of sanitizers and personal protective equipment, certain foods have also become unavailable recently, including their strawberry mango icee. Shacklette said the icee is good for patients who can only consume liquids. It has been out of stock for a month.

And as Arizona sees a surge in cases, essential workers are wondering whether their health is being considered when institutions are talking about the steps it takes to protect lives.

“What I wish they knew about us? It would be simply that we exist,” Shacklette said. “That we are choosing to come to work every day around COVID-19 so the patients can be fed and nourished. On top of that, most of us aren’t even making a salary at all. We still choose to come here and do the hard work that might put us at risk.”

‘Unseen folks in the hallway’

Sena said he has seen incredible moments of courage from custodians, biomedical technicians, computer technicians, engineers and nutrition assistants alike when their work requires them to enter COVID-19 units.

Sena remembered one instance when an engineer was asked to fix the air ventilation in the containment units to ventilate all the infected air. This engineer put on his protective suit and entered the COVID containment unit, walking into a patient’s room just to make sure it was working properly.

“Here’s a guy who probably never thought in his career he would need to wear protective equipment to go into a patient room to do his job,” Sena said. “But he did it. And he didn’t think twice about doing it, because it was the right thing to do.”

Custodians who are charged with cleaning the hospital are also one essential worker whose importance and workload has skyrocketed due to the pandemic, Sena said. The custodians are entry-level jobs, but Sena explained they are more than just janitors because the act of disinfecting is important to get right in a hospital.

From the hospital chapel and gift shop on the first floor to the pediatric intensive care unit on the second floor and the skybridge connecting the east and west campus, every inch of the building has surfaces on which COVID-19 can live.

The FMC's beginnings go back to 1910 when the Riordan family converted a home of the manager of Arizona Lumber and Timber Company into the Milton Hospital to serve lumber mill employees, according to “Mountain Town,” a 1994 book of Flagstaff history by Platt Cline. In 1936, Dr. Charles W. Sechrist’s modern Flagstaff Hospital replaced the older hospital when it was donated to the city.

Rocks from the first hospital were used to construct the infrastructure that currently continues to care for patients from around northern Arizona.

The custodians continue to ensure the walls and floors and patients rooms are kept in top shape, Sena explained. Normally, custodians should go into a room at least three times per day.

Sena said they’re expected to explain to patients how taking out the trash and cleaning the floors is linked to their continued health. With COVID-19 patients living in nearby rooms, and staff members walking in and out of the units, the cleanliness of these locations has been more important than ever.

Once a patient leaves, custodians are a crucial step of the process. A bed cannot be considered open for a new patient until every inch of it is sterilized, Sena said.

To ensure the custodians are cleaning to a higher standard, random tests are conducted where someone marks the room with invisible ink that is later checked with a blacklight to ensure it is cleaned well.

“The faster we can turn that bed over in that room, and allow new patients to be admitted, the faster we can serve our population. It’s that balance of quality and speed,” Sena said. “It’s not just cleaning the room, but it’s cleaning it fast and at a high level of quality.”

“Although in most people’s eyes they have an entry-level job in an organization, the task they are asked to carry out is largely an unrewarding task,” Sena said. “They’re sort of unseen folks in the hallway. The importance of the role is vital to the health and safety of the patients.”

Sablan said she shows her care for patients by trying to provide the best meal she can to help them fight whatever condition brought them to the hospital. Whether it’s giving them an extra packet of sugar or pepper, she said they’re happy to do it.

“It’s very personal. You get to know your patients, you get to know nurses, respiratory staff and housekeeping staff,” Sablan said. “It is like a family, the people you see every day.”

Shacklette wasn’t sure people realized how many departments are involved in running a hospital, and felt the community appreciation has unevenly focused on nurses and doctors. She knows doctors and nurses play a crucial role, but hopes people realize that they’re not the only ones who are working to save lives.

“If one of these departments were gone, if our department all of a sudden crashed and burned today, then the whole rest of the hospital would probably come down with it,” Shacklette said.

Blue Cross Blue Shield of Arizona (BCBSAZ) recently donated $10,000 to the Navajo Nation and $15,000 to the Hopi Tribe to help the two groups …

A gift like gold: FMC receives additional $62,000 in donations for COVID-19 response

Though personal protective equipment of all kinds is needed by healthcare workers during the pandemic, N95 respirators, in particular, have be…

SUNDAY FEATURE: Flagstaff nurses speak about life during the coronavirus

In the intensive care unit, nurses and doctors are valued for their ability to take quick and decisive action with every patient who needs the…