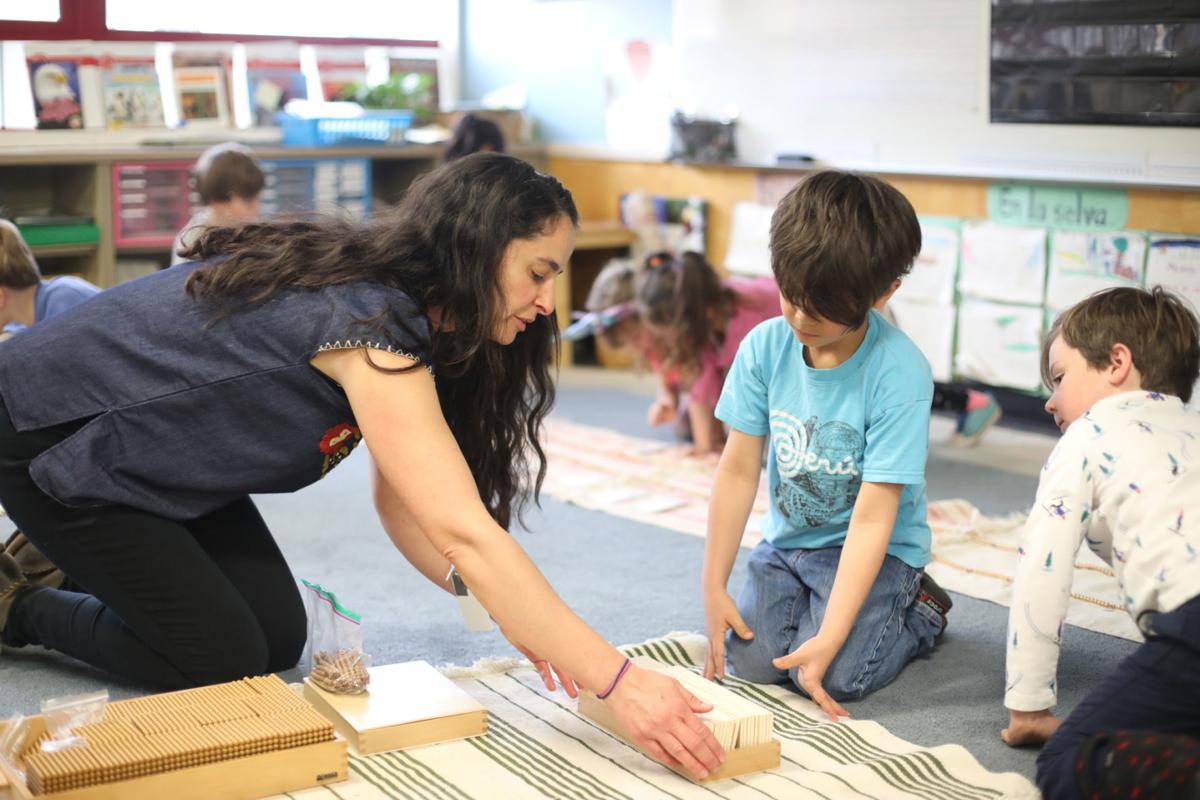 Puente De Hozho’s Susan Spizzirri works with her students in one of the school’s new multiage learning programs Friday morning. 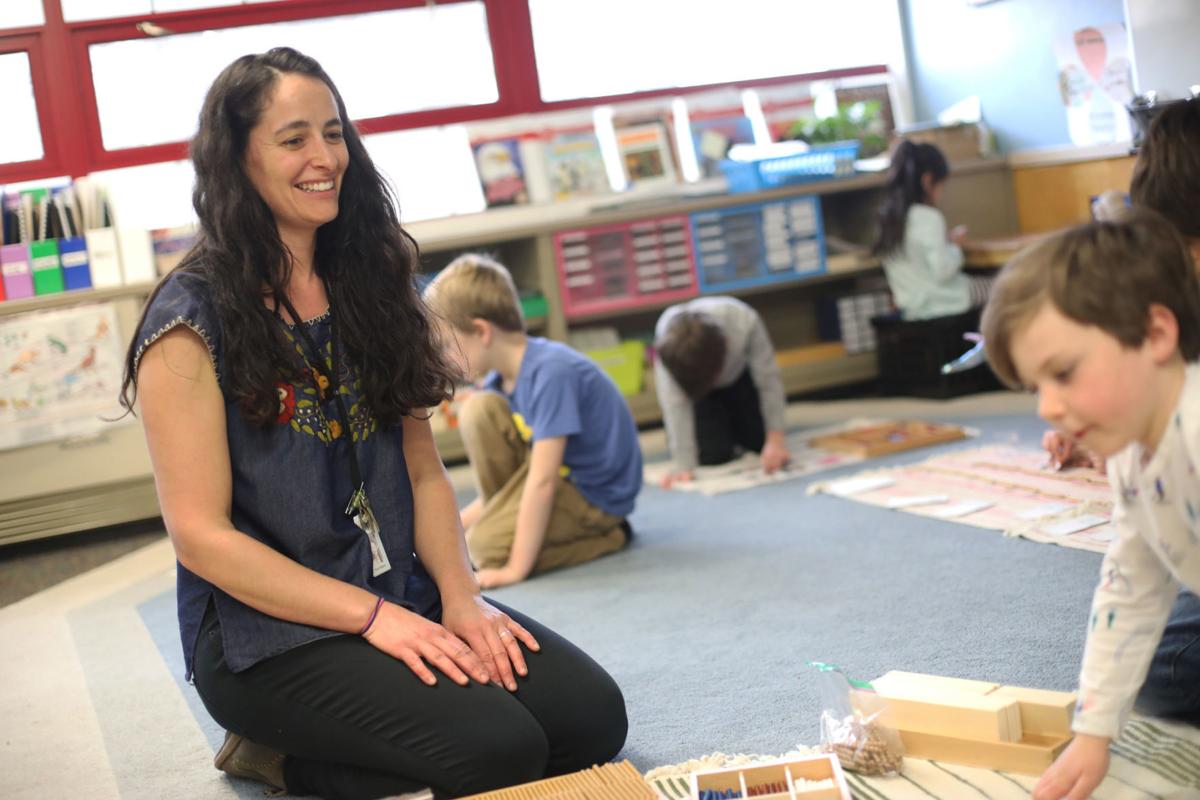 Right now, there is not one answer: Each school offers various programs, clubs and resources for students, but the full academic needs of such students are often unmet.

Flagstaff Unified School District has a possible solution called the Elementary Preparatory Academy, which is scheduled to begin at DeMiguel Elementary and Knoles Elementary starting this fall.

This pilot program proposes a “school within a school” model in which one classroom per grade would be designated for more accelerated and advanced learning. Much like the existing Personal Education Plan – a document to guide educators on how to best meet the needs of individual students – a conversation between families and instructors would be used to determine which students qualify for the academy. Families can opt their student out of the program at any time.

For the next school year, advanced classrooms will be available in third and fourth grade at Knoles and first through fifth grade at DeMiguel.

Providing resources for advanced students is not just a good idea, though -- it’s a necessity for student retention. Susan Smith, director of Exceptional Student Services for the district, said at the last school governing board meeting that hundreds of advanced and gifted students have left the district in recent years because their needs have not been met. In the 2013-14 school year, 616 such students were identified. This year, there were only 392.

The goal of the academy is to try to meet those needs at DeMiguel and Knoles – schools that volunteered to try the pilot program – by allocating a classroom for gifted students as well as for those students needing more of an academic challenge than their peers.

“Creating less of an achievement spread amongst the kids in the classroom will really help those students get more attention at their level,” Smith told the Daily Sun.

The academy concept (and name) was inspired by Litchfield Elementary, an A-rated school in a similarly sized district west of Phoenix. Each of the FUSD teachers who volunteered to lead the new classes visited Litchfield to observe how the academy would operate.

Sarah Martinet, FUSD’s Exceptional Student Service specialist, said the district considered various models for advanced learning, but the traditional approach was the one that stuck, and the one families favored in an interest survey.

Rachel Merriman, a first-grade teacher at DeMiguel, said she worked with the same model at her former school in Texas. Although she was not teaching the advanced class, she said she still had advanced learners in her classroom.

Merriman said teachers also remained closely connected and were still able to share ideas, despite the differences in their students’ pace.

Students participating in the academy will still have opportunities to interact with their peers at lunch, recess and “specials” like P.E. and art.

“It’s not exclusionary, by any means; it’s about making sure we’re meeting students where they are and making sure they are making full use of their time and their aptitude. It may look a little different on each of the campuses, but it’s a tool in the toolbox to make sure that we’re meeting what students and families need,” FUSD spokesman Zach Fountain said.

Merriman’s son is a second-grader at DeMiguel; she hopes the academy will provide opportunities for him that existing clubs like Lego Robotics, Odyssey of the Mind and STEAM Club cannot.

“I think that the teachers are doing a good job as it is; however, I do think there is a group of children that are definitely advanced learners that need a more rigorous opportunity on a daily basis,” she said.

The curriculum that will guide the new classes is yet to be determined.

DeMiguel and Knoles volunteered to implement the academy format in their schools, but they are not the only ones to use these ideals to expand student services in the coming year.

For the first time, Puente de Hozho will be allowing students to apply and enter the multilingual school after first grade, if they are proficient in their first language – English, Spanish or Diné.

Principal Robert Kelty used a metaphor of light bulbs to explain why students can enter a multilingual school like Puente later than their peers and still succeed.

“We have light bulbs in our head and when we have a very bright light, in terms of our first language, that energy is drawn and increases the second one. Over time, you want two completely lit bulbs and that’s when you are truly proficient in both languages, when you are not drawing on the other,” he said.

Puente de Hozho will also be developing two additional multiage classrooms, another form of advanced learning, because of the success of a combined kindergarten and first-grade class that began this year.

Susan Spizzirri, who teaches the class, said having these two groups in the same classroom has helped both improve.

“Multiage is a beautiful thing. They learn from each other. Kindergarteners will just watch first-graders and watching them is making them interested in the work. They’re learning from each other just by observing. For the older students, they have a chance to be leaders,” she said.

For the first time since 2015, Flagstaff high schoolers did not take the state-issued standardized AzMERIT exam this spring.

Puente De Hozho’s Susan Spizzirri works with her students in one of the school’s new multiage learning programs Friday morning.