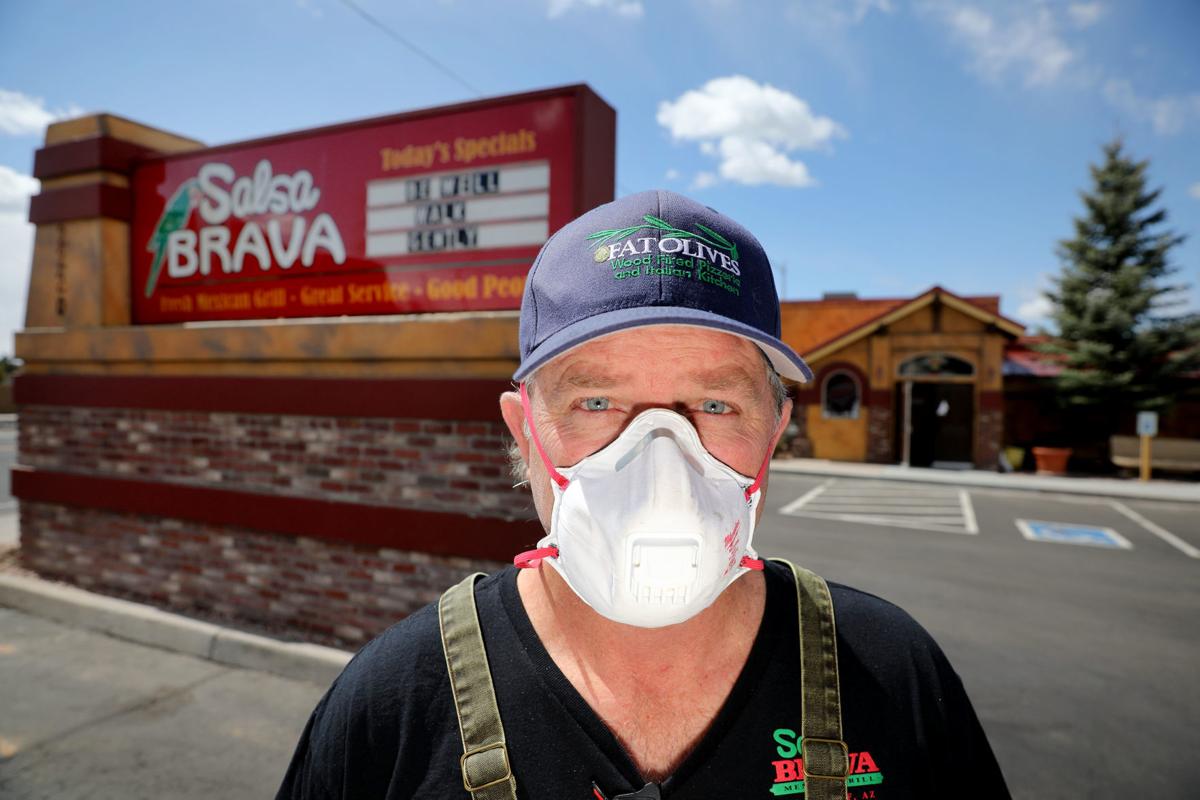 John Conley, owner of Salsa Brava and Fat Olives restaurants, will reopen Fat Olives on Friday for pickup orders. Conley closed both of his restaurants on March 15 ahead of mandatory closure orders but continued to pay his staff during the shutdown. 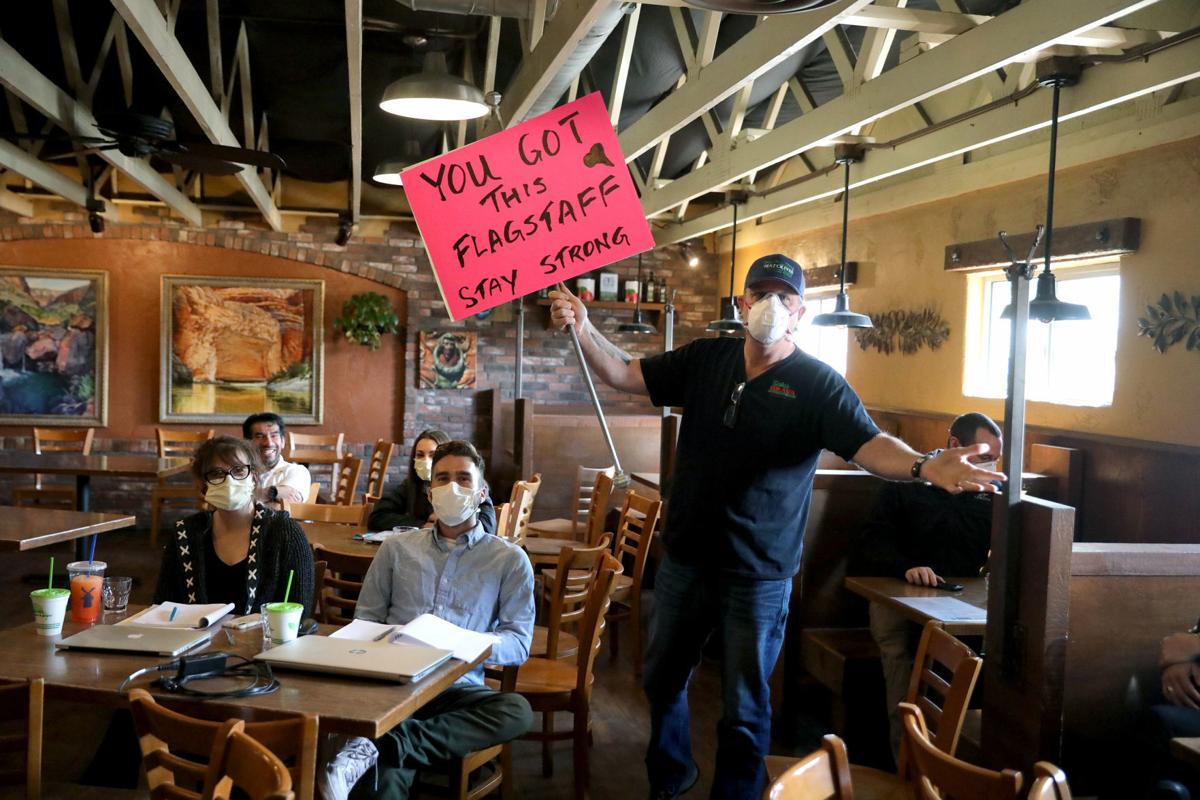 Flagstaff restaurateur John Conley holds one of the signs that was on the street in front of Fat Olives while it was closed due to the COVID-19 pandemic. Conley will reopen the restaurant Friday for pickup service to coincide with his appearance on a new episode of the Food Network TV Show Diners, Drive-ins and Dives hosted by Guy Fieri. 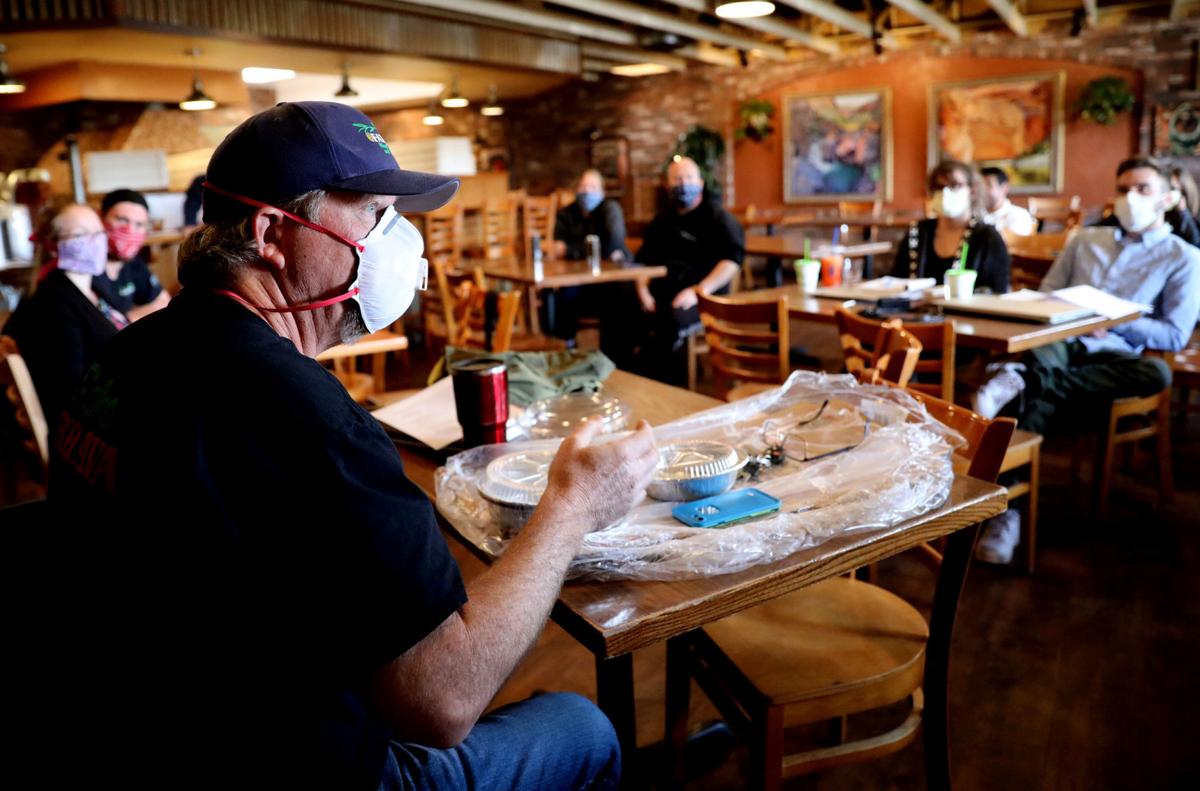 Flagstaff restauranteur John Conley talks to his management team Wednesday as they plan to reopen Fat Olives after Conley closed it and his other restaurant, Salsa Brava, for five weeks to protect customers and staff from the COVID-19 pandemic.

No, you won’t be seeing the cherry red Camaro driven by platinum-spiked-coiffed Guy Fieri cruising down Route 66 in Flagstaff on Friday night.

But, in a sign of the times, you will be able to see the host of the Food Network’s popular “Diners, Drive-Ins & Dives” connecting virtually via Zoom with local chef John Conley in a special coronavirus version of the popular TV show, dubbed “Takeout Edition.”

Conley, whose restaurants, Salsa Brava and Fat Olives, have been closed during the stay-at-home order, has become something of a regular of Fieri-hosted Food Network Shows. His virtual appearance with three other chefs will premiere Friday at 9 p.m., and it figures to be vastly different, but entertaining in its own way, from Conley’s previous Food Network appearances.

“We got a call from Guy recently and he said, ‘I’ve got this idea -- a coronavirus episode!’” said Conley, who will reopen Fat Olives for takeout service on Friday. “Nobody gets three ‘Diner, Drive-Ins & Dives’ (episodes), so we were like, ‘OK.’”

What this appearance entails is something new for Conley, who despite his telegenic persona, is a chef at heart and not a celebrity.

He and his family -- wife Genevieve, children, Brandon, Sage, Adam and Ivan -- essentially had to film the Flagstaff portions of the episode themselves in their kitchen at Fat Olives, upload it via the sharing platform Dropbox, then overnight all the ingredients to Fieri in California. From there, Conley guided Fieri through the steps in preparing the entrée, just as if the two were standing next to each other in the kitchen cracking corny jokes.

And what is that special dish Conley whipped up?

Well, he won’t say because he doesn’t want to spoil the Food Network’s unveiling. But it is a Mexican dish that, one day when the coronavirus shutdown has been lifted, will be added to Salsa Brava’s menu.

It was created by son Ivan, 15, and a budding chef. Really, it was the culmination of a new quarantine routine for the Conleys: getting together each night to cook, dine and share stories. That’s something that can be difficult to do in normal times, with everyone out and about and two restaurants to run.

“What occurred to me and my family is, since all the playgrounds and parks are closed and there’s not much to do, my kitchen really became our family’s playground over the last month,” Conley said. “We’ve been coming down here and just doing research and development, and (Ivan) came up with this (entrée). I thought, 'We need to put this on the menu and let’s present this as one of the ideas to Triple D.' And Guy was like, ‘Let’s do it.’”

The entire Conley clan took part in the filming, which took place a few weeks ago. Conley admits to not being a technological wizard, so he enlisted the help of a local friend, a videographer, to give pointers.

Fieri’s production company, Citizens Productions, shipped audio equipment to Flagstaff and gave instructions on sound to enhance sound quality. The video, however, was done the relatively low-tech way -- on iPhones.

“Essentially, we filmed it ourselves,” he said. “We sent all of it to Citizens Productions and they started doing their (editing) magic.”

Conley has yet to see the final edit, but he is confident that the producers were able to take the reams of footage he sent and make it congeal. All four chefs from locales around the country previously have been featured on “Diners, Drive-Ins & Dives,” so the show will serve as something of a reunion between host and guests. But not a greatest hits episode, since Fieri explicitly told the chefs to develop a new dish to share.

“Our kitchens have turned into our playground,” Conley said. “We certainly have spent a lot of time cooking (for themselves) over the last month, cooking over the wood-fired oven, cooking proteins and just playing. We’ve had huge disasters and amazing successes. It’s brought us all together in the kitchen -- which I feel we were really missing as a family.

“If there’s any silver lining to this whole thing, it’s that we as families have come to learn to come back into the kitchen and cook and sit down and have dinner and talk about our days, share our love. Sad as it is what’s going on, we’ve reunited in that place that has always been that important to us. It was so much fun and it came at the perfect time. Here we are, in quarantine, uncharted waters, and we get a call from the Food Network and Guy Fieri and there’s a sense of excitement about it. There also was a lot of, like, ‘How is this going to turn out?’”

Conley says he’s been assured that Flagstaff will be featured prominently in the episode. He hopes, too, that the publicity will help the town’s economy once things are finally back to normal.

“It’ll be great for Flagstaff,” Conley said. “Stuff like this always draws people. There are so many people who just follow the Triple-D road map. When they come into Flagstaff, they don’t just eat at Fat Olives or Salsa Brava they are going to the Grand Canyon and staying here, and this show is one of those things that can benefit our entire community.”

John Conley, owner of Salsa Brava and Fat Olives restaurants, will reopen Fat Olives on Friday for pickup orders. Conley closed both of his restaurants on March 15 ahead of mandatory closure orders but continued to pay his staff during the shutdown.

Flagstaff restaurateur John Conley holds one of the signs that was on the street in front of Fat Olives while it was closed due to the COVID-19 pandemic. Conley will reopen the restaurant Friday for pickup service to coincide with his appearance on a new episode of the Food Network TV Show Diners, Drive-ins and Dives hosted by Guy Fieri.

Flagstaff restauranteur John Conley talks to his management team Wednesday as they plan to reopen Fat Olives after Conley closed it and his other restaurant, Salsa Brava, for five weeks to protect customers and staff from the COVID-19 pandemic.