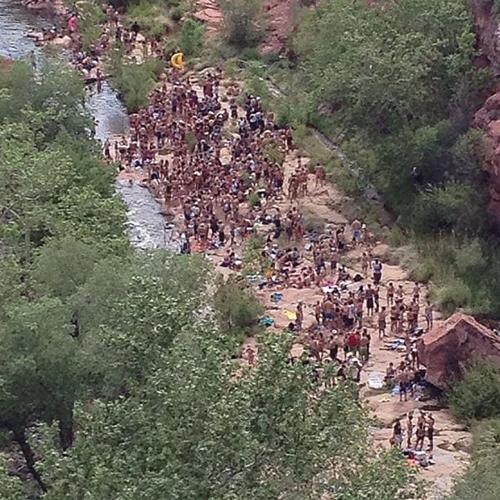 People gather under Midgley Bridge on Cinco de Mayo in 2012 to recreate. The U.S. Forest Service is clearing hundreds of pounds of trash from the area after weekends like these. (Courtesy photo/Aubrey Laird, file) 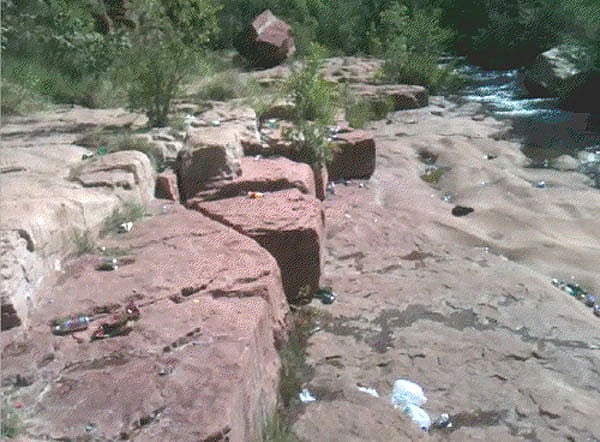 If it's nearing graduation time in Flagstaff's university and high schools, beer bottles are piling up in the Coconino National Forest under Midgley Bridge and at Chavez Crossing near Sedona.

The parties there seem to be growing.

Forest Service employees cleared out 400 pounds of trash from one recent weekend alone -- and that was before wall-to-wall crowds gathered under Midgley Bridge this past weekend for Cinco de Mayo.

"It definitely requires almost an entire day for one of our personnel to handle the aftermath ... it takes away our ability to respond to other issues," said Kevin Lehto, an assistant recreation staff officer on the Coconino National Forest.

Forest employees cleared 14 bags of trash from beneath Midgley Bridge on one weekend alone.

Law enforcement hasn't often ticketed anyone for littering because it's difficult to catch someone in the act.

Further, anyone younger than 21 and drinking alcohol has some incentive to leave the cans and bottles there.

"Especially when they're illegally drinking, they don't want to carry evidence that they have an illegal bottle or can of beer with them," Nelson said.

Police have cited a drunk driver at Chavez Crossing this year, and they have ticketed another for marijuana possession.

The Sedona Police patrol the crossing too, says the Forest Service.

Actually, these are in the domain of the sheriff's offices, said a woman at the Sedona Police Department (upper Oak Creek Canyon is in Coconino County, while Chavez Crossing sits on the border of Yavapai and Coconino counties).

Frances Short Pond, a beloved fishing site and recreational area in Flagstaff, has been drained several feet to serve as a retention basin for…

Defense attorneys say FPD officer Dustin Eberhardt may have broken the law during an undercover prostitution investigation. That's why a "motion to appoint counsel" was filed by a defendant's lawyer on the officer's behalf.

Flooding closes US 89 north of Flagstaff

The Arizona Department of Transportation announced US 89 was closed Friday at around 10:30 in the morning. The highway flooded about five mile…

Northern Arizona Healthcare announced today that Florence Spyrow has stepped down as the system president and chief executive officer.

One person killed in Thursday night crash on westbound I-40, east of Flagstaff

A motorcycle passenger is dead after a crash on I-40 westbound, 11 miles east of Flagstaff.

A 23-year-old Flagstaff man is behind bars-- the primary suspect in a midnight shooting at an apartment complex on Beaver Street. Police belie…

'Detention is not good for kids': How Coconino County is doing things differently for Flagstaff youth

This past year, Coconino County Juvenile Court didn’t send any kids to the Department of Corrections, as the average population of young peopl…

NASA prepares return to the moon

NASA prepares return to the moon

People gather under Midgley Bridge on Cinco de Mayo in 2012 to recreate. The U.S. Forest Service is clearing hundreds of pounds of trash from the area after weekends like these. (Courtesy photo/Aubrey Laird, file)