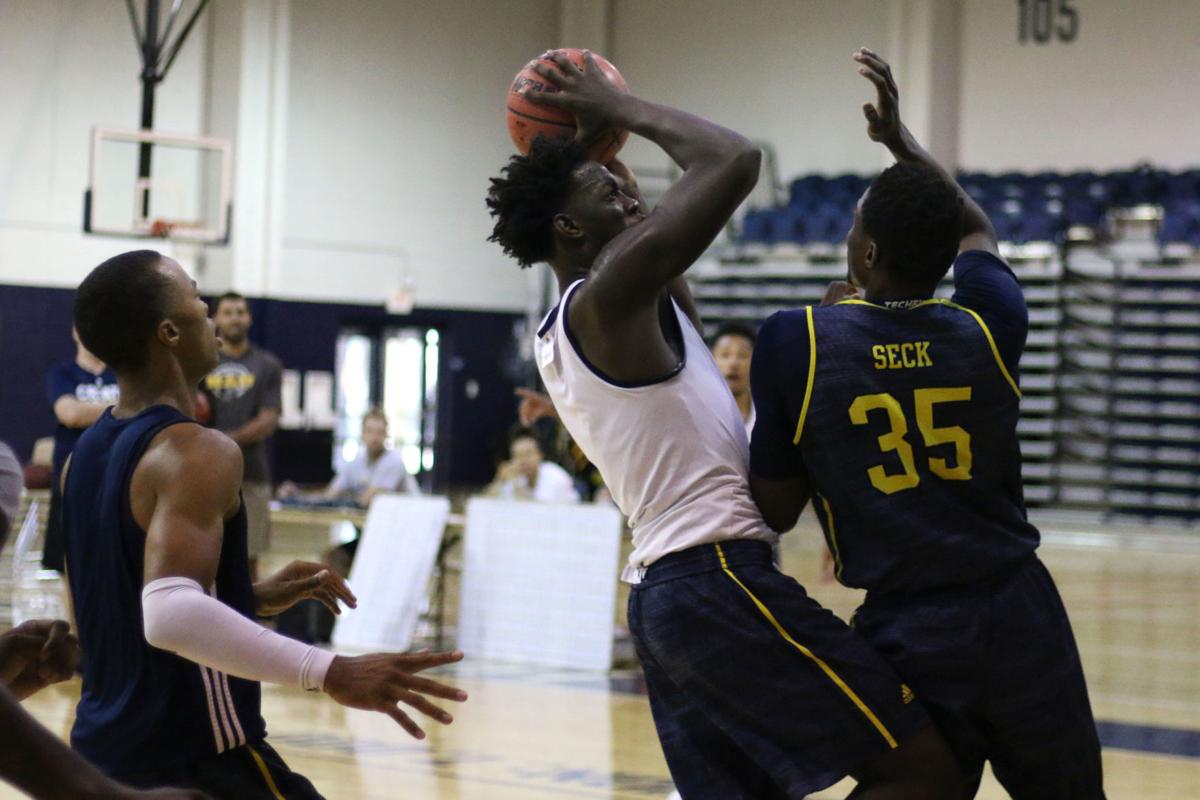 Northern Arizona Lumberjacks forward Bernie Andre (middle) fights through contact to put up a shot during practice at Rolle Activity Center on Aug. 6.

Northern Arizona Lumberjacks forward Bernie Andre (middle) fights through contact to put up a shot during practice at Rolle Activity Center on Aug. 6.

With about three weeks remaining until the start of the 2018 season, the Northern Arizona men’s basketball has been experimenting with a faster tempo and more versatile lineups, and at the forefront of the versatility is 6-foot-7 transfer forward Bernie Andre.

Andre works into the Lumberjacks lineup as a hybrid four, bringing with him a skill set that allows him to make plays for his teammates while making a difference in the lane on defense.

“I see myself slotting in well and I see myself doing multiple things,” Andre said following practice on Thursday. “I can pass, I can shoot it and drive it really well, and get to the basket. I’m just really versatile and I can fit into anywhere you put me on offense.”

During practice Andre has been utilized in multiple ways, at times as a ball handler on the perimeter and others as the roll man in pick-and-roll plays. His versatility on defense has led to matching up with both short, shifty guards to Northern Arizona’s bigs in practice.

“We played Gaellan at the four and the five, and he is really similar to Bernie,” Murphy said. “I also felt like Jordyn Martin was really versatile too, especially defensively, because Jordyn could defend perimeter and post guys. So I feel like we’ve had this versatility before and it’s exciting to have again.”

Andre and Bewernick are similar sizes and have the ability to play both inside and out on offense. Andre can guard inside-out in a similar way to Martin -- the 2015 Big Sky Conference Defensive Player of the Year.

In Bewernick’s junior year in 2014, his most productive across all statistical categories, he averaged 7.3 points, 5.8 rebounds and 1.8 assists while shooting an efficient 46 percent from the field and 37 percent from 3-point range. If Andre can replicate similar numbers as Bewernick did, he can greatly help an offense that finished in the bottom of the Big Sky in all major categories.

Andre most recently played at the junior college level at Wallace State in Alabama, where he averaged 12.9 points, 5.8 rebounds and 2.3 assists per game while shooting 45.9 percent from the field.

At media day two weeks ago, Murphy mentioned that he thinks Andre could even lead the Lumberjacks in assists, and he still believes that to be the case. Murphy expects Andre to find those assists naturally through the offense and by playing off teammates.

“I think it’s got to come within the flow of the offense,” Murphy said. “You can’t force feed anything whether that’s Bernie with assists or Carlos (Hines) with scoring. It’s not going to look as good as it does when it comes naturally.”

A North Miami Beach, Florida, native, Andre said he chose to join Northern Arizona in part because of a prior relationship with Lumberjacks assistant coach Jason Sanchez, who played college basketball at Miami Dade College in Miami.

“I knew coach Sanchez from back in Miami and it’s all about family. And that’s what this is, so it felt like the place for me,” Andre said.

Andre also talked about the Big Sky Conference preseason media and coaches polls that were released Thursday morning before practice.

The Lumberjacks were picked to finish last among the 11 teams in the conference and Andre recognized that the past few years have been a struggle for the program, but he is confident that this year can be different.

“We got to prove people wrong,” Andre said. “I don’t think we are going to have the same season we had last year. We have a lot of new guys and a lot of new pieces that do different things. We are very skilled, so it should be a different season.”

Year in and year out the Northern Arizona men’s basketball team has had major roster upheaval, and the 2018-19 season is no different.

Not forcing the issue: A look at NAU guard Carlos Hines' streaky shooting