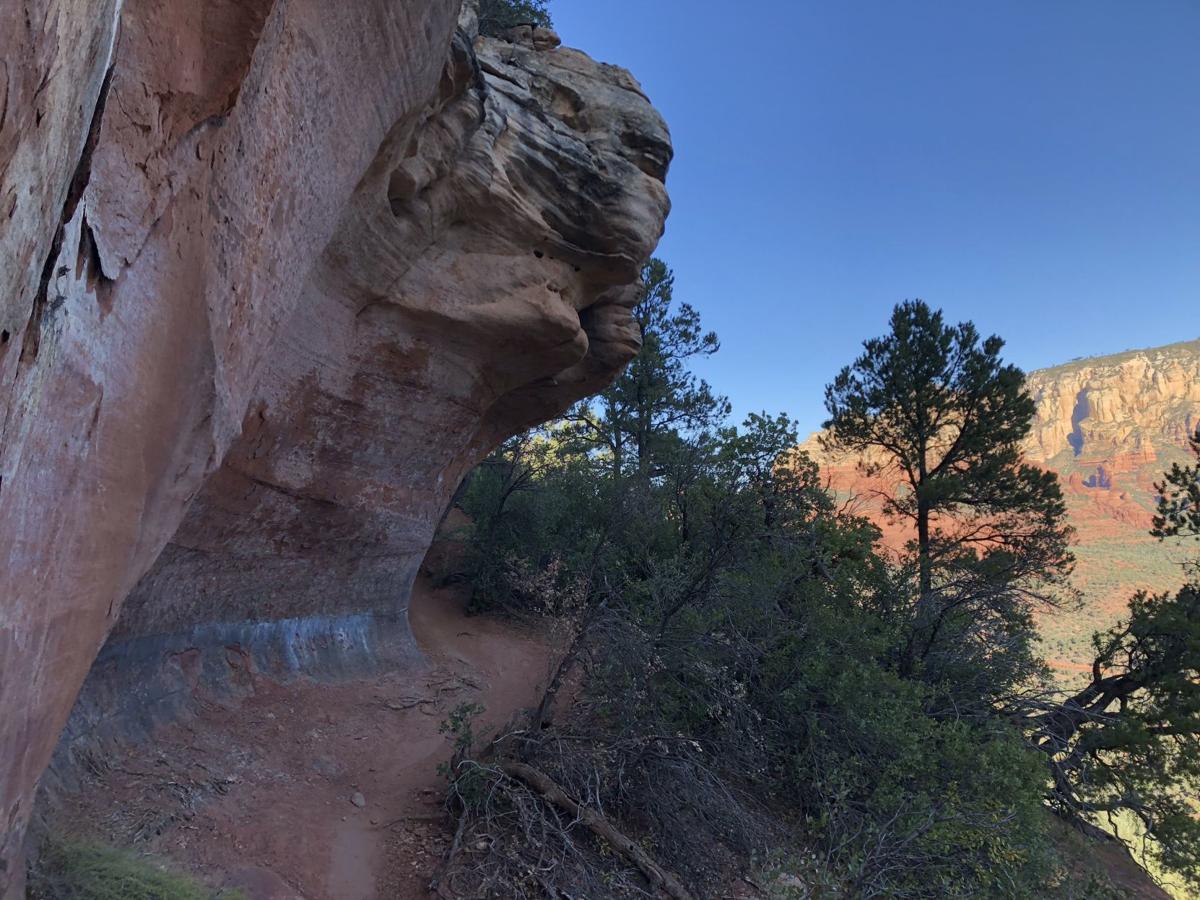 Rocks hang over the Hangover Trail in Sedona. The singletrack is precarious for trail users. 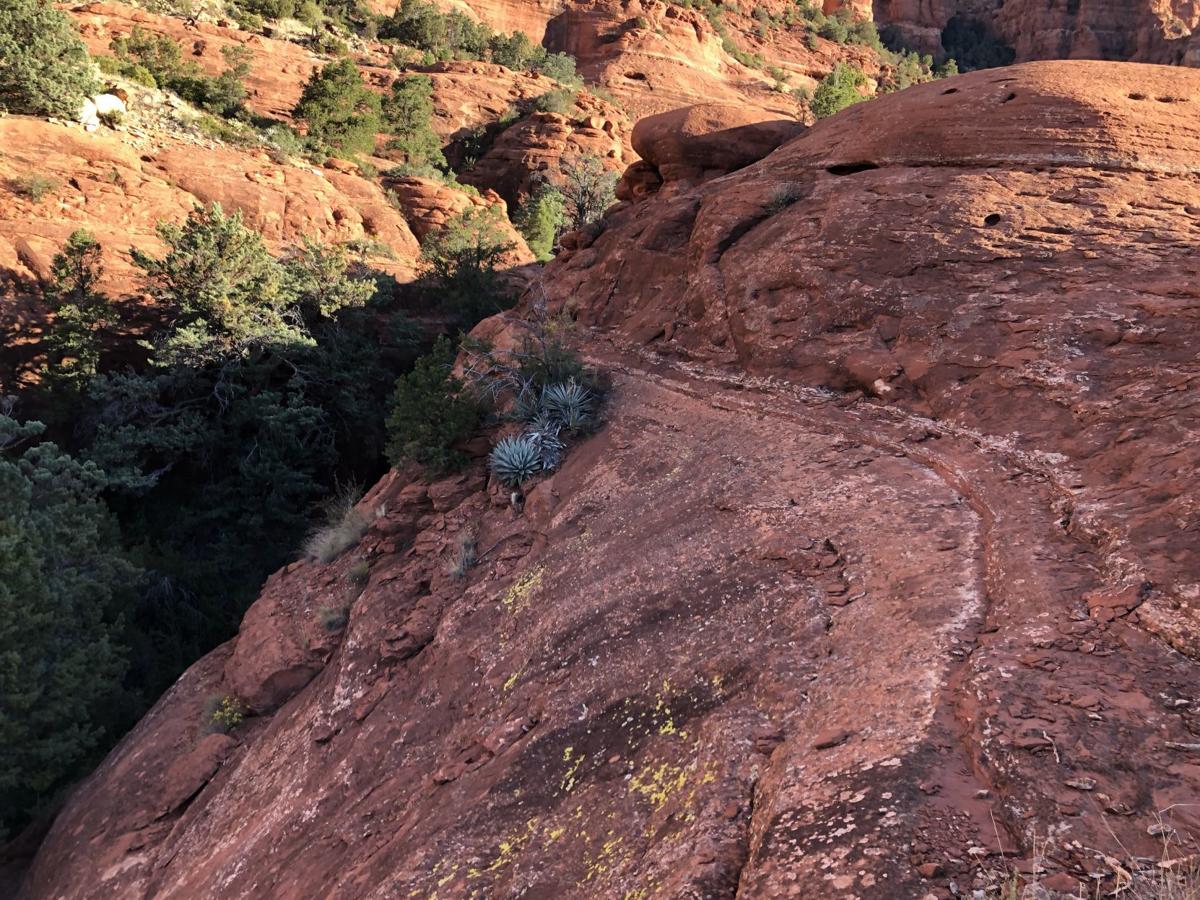 The camber on the Hangover Trail slows runners down, mostly for safety purposes. 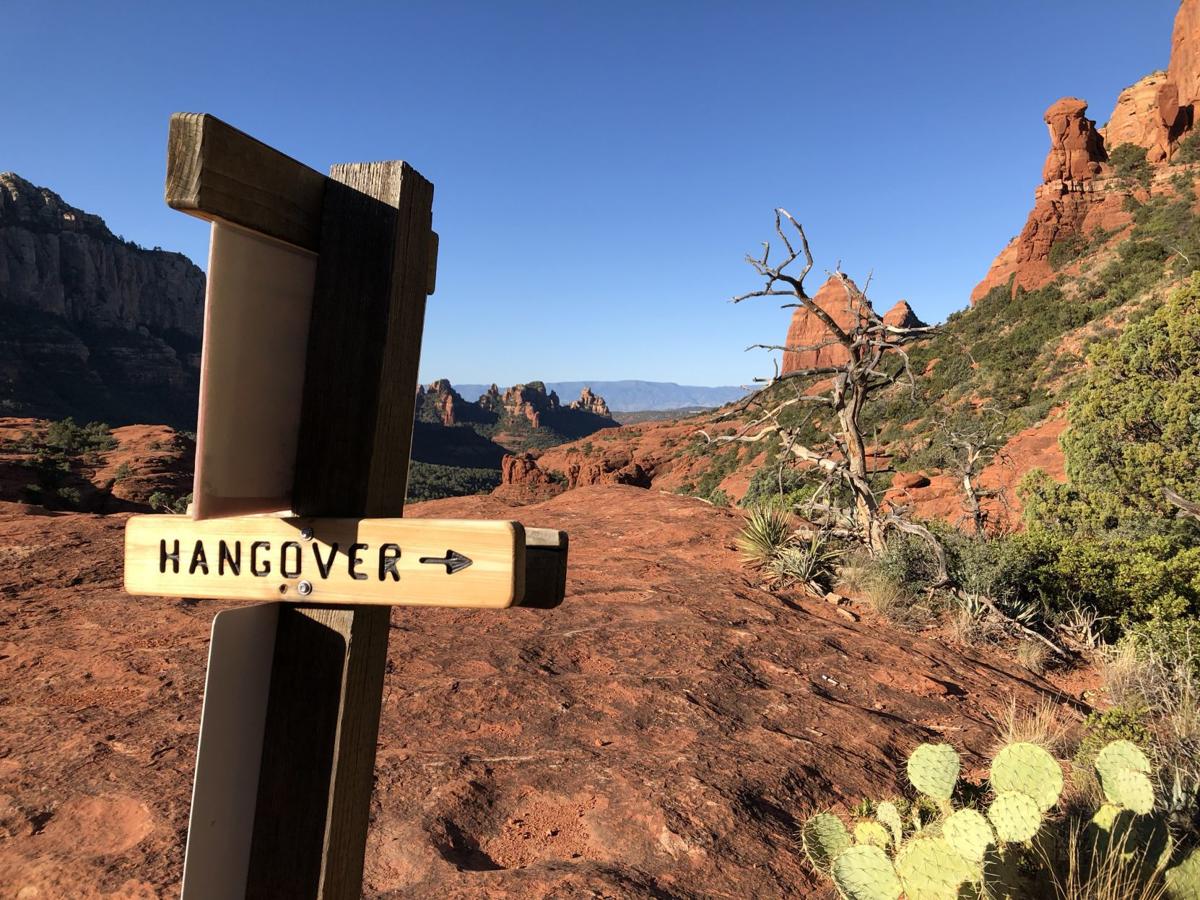 Cow Pies Trails ends at a height over 5,000 feet, but the moretechnical Hangover Trail awaits 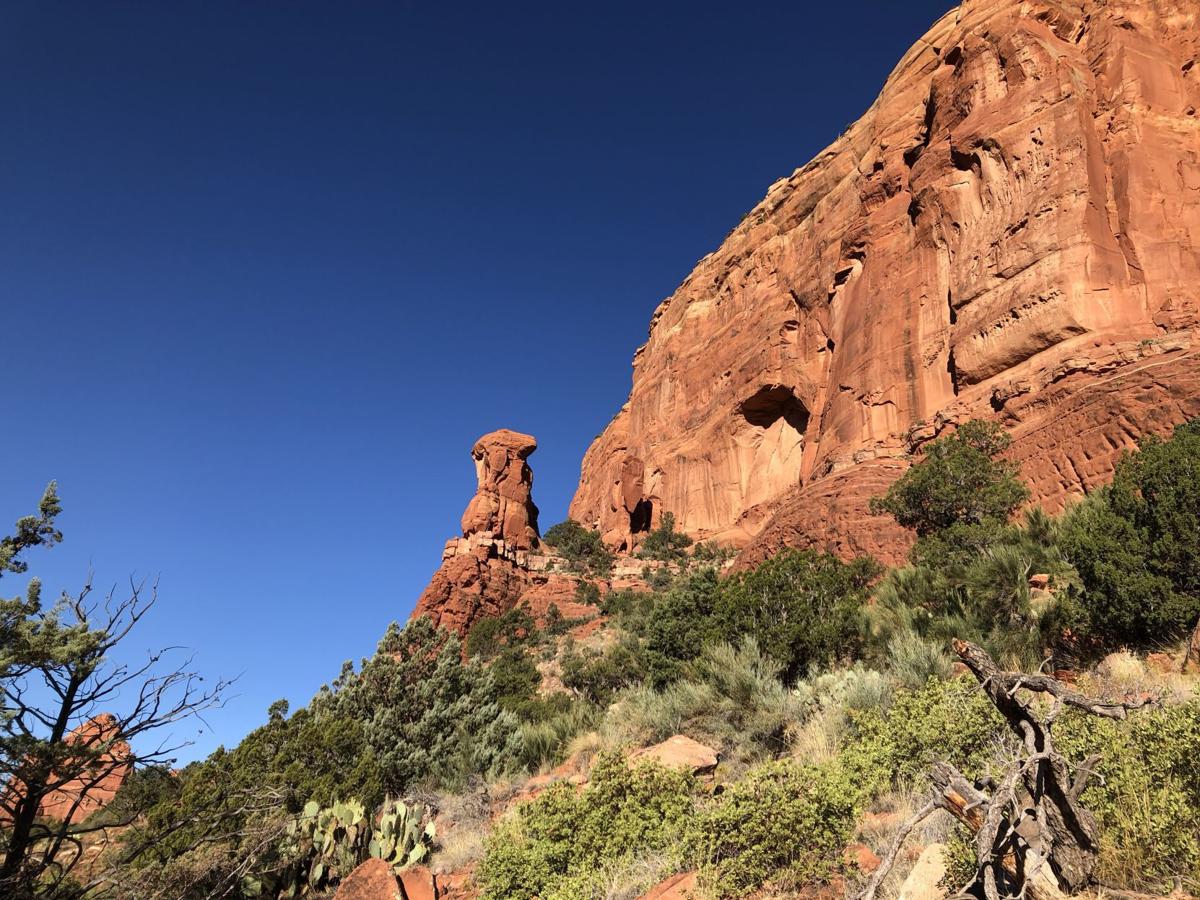 The red rock formations serve as a backdrop during the early stages of the Hangover Trail. 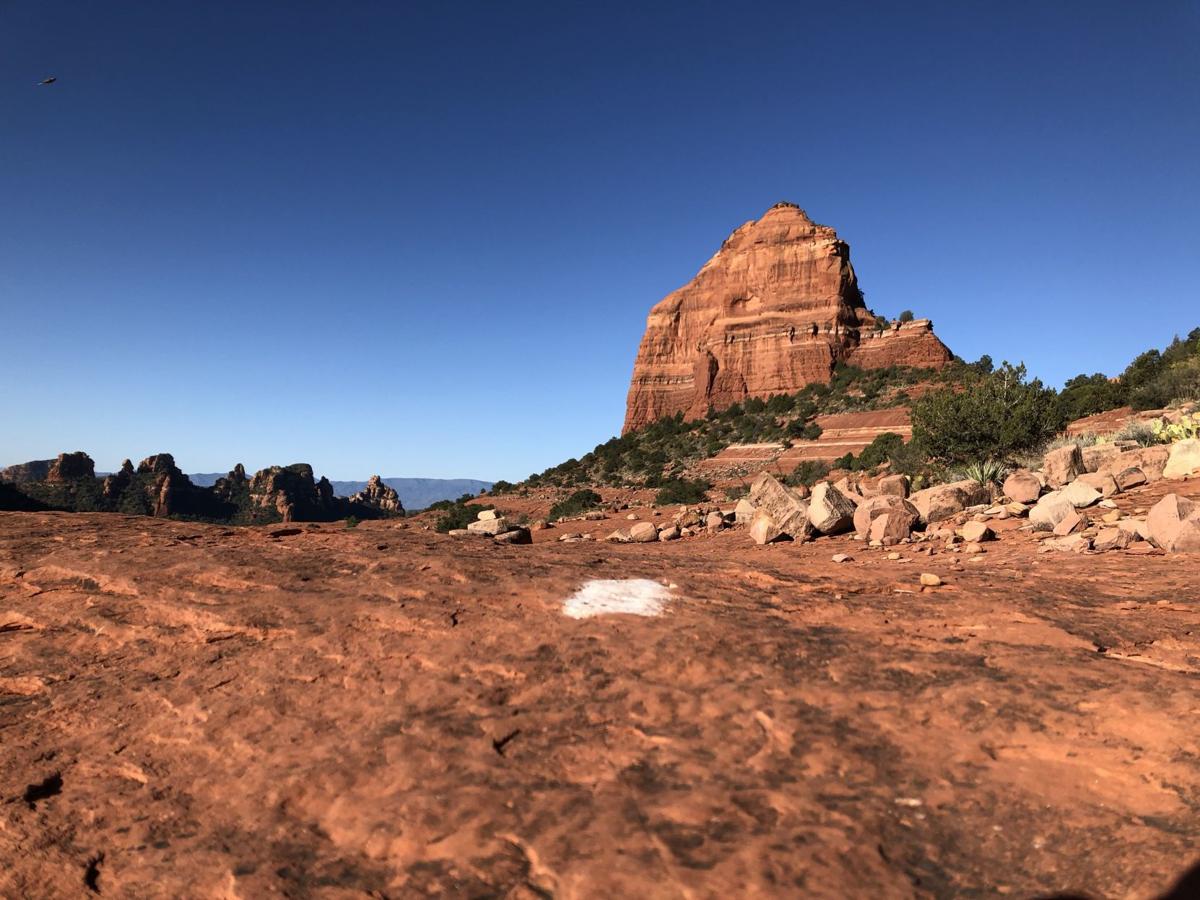 The white hash marks on the red rock point the way of the Hangover Trail. 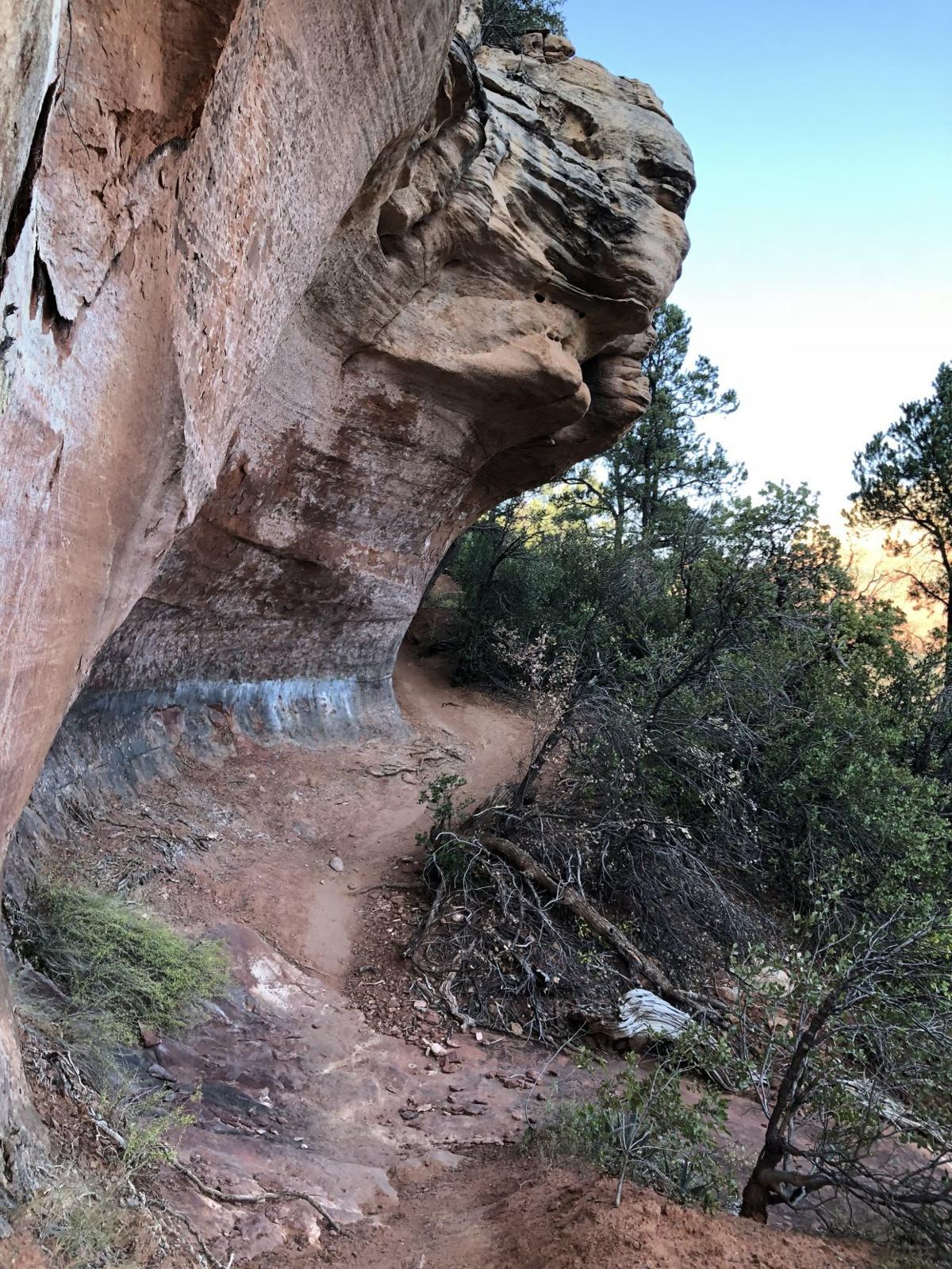 It's a long way down into Oak Creek Canyon is you make a false step on the Hangover Trail's singletrack. 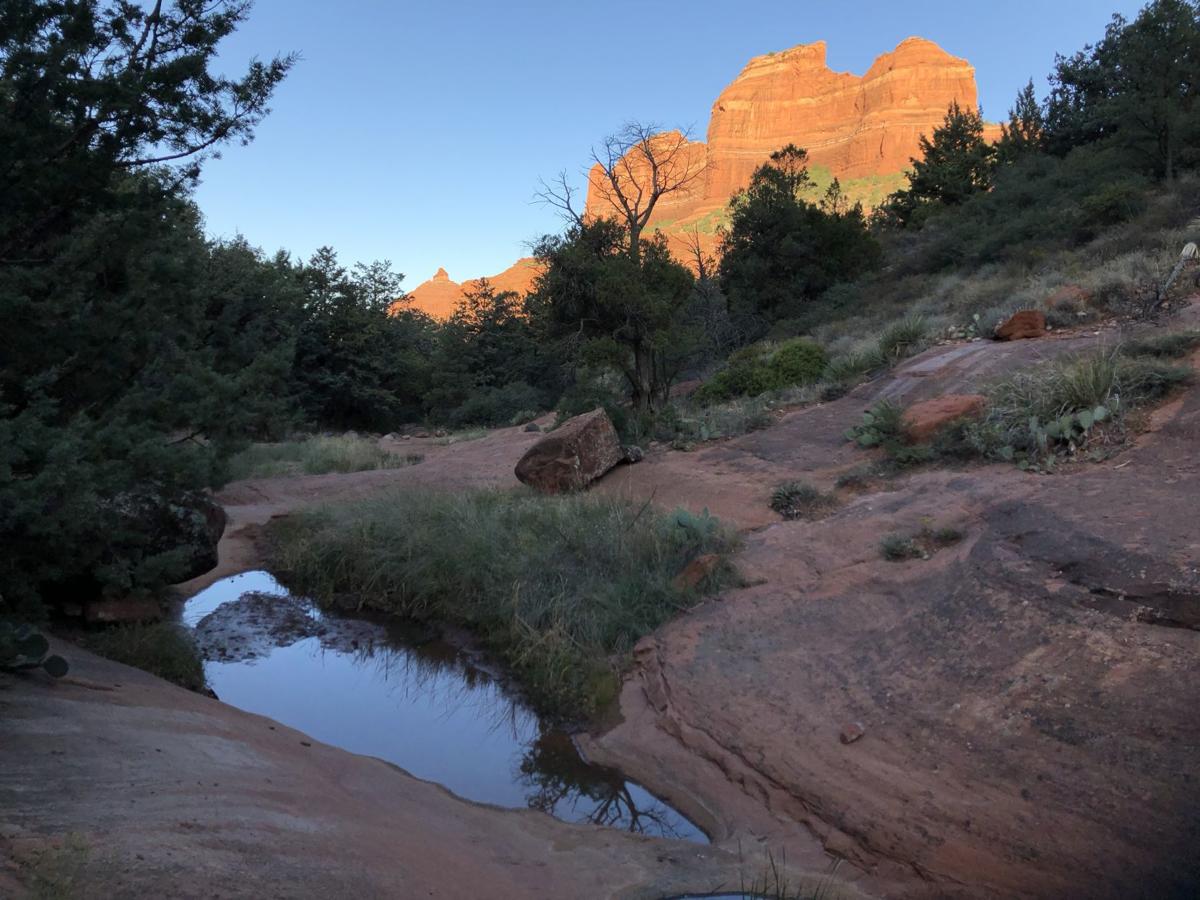 The Munds Wagon Trail near the start of the run affords vistas that make the miles go by fast.

Trails in Sedona bear colorful names, colorful as the ubiquitous red rock formations that make this town famous. Maybe the monikers can be attributed to the Old West pretensions of the place, or the energy-harnessing New Age vortex that people channel, but who wouldn’t want to wander on trails dubbed Gunslinger, Slim Shady, Deadman Pass or Hogwash?

I undertook this 8.2-mile loop that begins on the Munds Wagon Trail, continues onto Cow Pies (another whimsical name) and then spends the better part of four miles on the Hangover Trail before moseying back toward the trailhead off of Schnebly Hill Road, sobered by the admonitions of trail books, maps and websites that gave Hangover a black-diamond (difficult) ranking — a double black diamond for those with the temerity to attempt it on a mountain bike.

Try as I might, I couldn’t find the etymology for dubbing the trail “Hangover,” though I reckoned enlightenment might come once I actually stepped foot on that portion of the loop.

My reasons for making the drive down 89A from Flagstaff on this day had more to do with escaping the morning chill to a lower elevation than marking another quirky trail name off my personal list. (Still to be attempted: The Unemployment Line to Atomic Dog trails in Bellingham, Wash.)

It was a pleasant 47 degrees when I pulled into the Munds Wagon Trailhead, a quarter mile from Sedona’s upscale touristy main drag. Even at 7 a.m. on a weekday, the parking lot was nearly full, though that might have been because a group of plein air painters had set up their easels in parking spots to better capture the grandeur of the red rock outcropping to the north.

Unlike in Flagstaff, here you had to fork over $7 from an ATM-like contraption for a day pass — the cost for warmth, perhaps?

If there is a knock on this loop, it’s that the first two miles or so on the Munds Wagon Trail roughly parallels Schnebly Hill Road, which loses its smooth asphalt paving and becomes a rock-strewn, pot-holed dirt path suitable only for the highest of high-clearance vehicles.

So, the good news: Not a lot of traffic within 100 feet of where you are running. The bad news: The vehicles that do pass by tend to be those “Pink Jeep” tours, with the driver/docent miked-up and jabbering about the history of the place. Those following the trail must cross over Schnebly twice before drifting down into Bear Wallow Canyon to get away from the tourist hub-bub.

Munds Wagon Trail, with the red-rock vista beckoning to the northwest, is a pleasant tune-up for the more intense and technical climbing to come. It is juniper-lined and shaded, a stark contrast for the sun-exposure sure to follow, plus you’ll traverse your first instance of slickrock.

Less than two miles in, you reach the intersection with the Hangover Trail to the left. There is something of an online war among commenters on web sites as to whether to turn here and ascend the Hangover Trail clockwise to the peak or whether to do it counter-closewise, gently ascending Munds Wagon and then turning left on Cow Pies Trail, so named because the red slickrock resembles nothing so much as bovine dropping.

Either way is a haul, but most opt for the counter-clockwise route. After traversing Cow Pies, only about a half-mile. You find yourself on a plateau overlooking Bear Wallow Canyon below. The views are sublime, but the specter of Hangover awaits.

At this point, it’s easy to lose track of the “trail,” since it is all slickrock and there is no traditional path to follow, not even any shoe imprints to guide you. Fortunately, the forest service (in cooperation with local mountain biking groups) has strategically spray painted white hash marks to denote the way. Normally, we’d abhor such marring of the landscape, but it sure is handy to know exactly where to go.

The way forward toward the official start of Hangover consists of a series of slickrock switchbacks with a pretty serious downward sloping camber. At times, the going is dicey and a wrong footfall would mean a long plunge down.

The only actual tail signs on the loop come at the topmost start of Hangover. The sign says, in all caps, “Caution! Extremely Difficult – Experts Only.” And then there are two black diamond icons for added emphasis. I figured, OK, that’s mostly for the mountain bikers attempting the singletrack around the side of Mitten Ridge, just below two massive red-rock formations.

Turned out, everyone should heed this advice. It’s no hyperbole to say you take your life in your hands (or, rather, feet) on Hangover. It’s the narrowest of singletracks at the edge of the ridge. It’s a great view down into Oak Creek Canyon from this great height, but may I suggest keeping your eyes on the trail in front of you when actually running.

But it’s also smart to occasionally look up and ahead of you. That’s because, as you wend your way around, the rocks clinging to the cliff thrust themselves over the trail, like a wave cresting in those Japanese tsunami paintings.

Thus, I had my answer. “Hangover” refers to these tunnel-like rocks peeking into the abyss.

The precarious fun is not done yet, though. As you make your way around the rock formation above you, the singletrack transforms into a steep mountain of slickrock — and you must descend it. Thankfully, the white hash marks return to guide the way, but it’s impossible (at least for me) to run down this slippery slope. I ended up walking sideways.

From there, it’s another mile or so of descent on dusty singletrack back to the first Hangover intersection with Munds Wagon. It seems like a victory lap back to the trailhead after the harrowing Hangover experience. Once it’s over, though, you not only feel a sense of relief and accomplishment, but also strangely want to tackle Hangover again — maybe in a few months.

Directions: From Flagstaff, take Route 89A for about 24 miles. At the second traffic circle in Sedona, veer left onto Highway 179. In a quarter mile, turn left onto Schnebly Hill Road. Go a half mile. The trailhead will be on the left.

Rocks hang over the Hangover Trail in Sedona. The singletrack is precarious for trail users.

The camber on the Hangover Trail slows runners down, mostly for safety purposes.

Cow Pies Trails ends at a height over 5,000 feet, but the moretechnical Hangover Trail awaits

The red rock formations serve as a backdrop during the early stages of the Hangover Trail.

The white hash marks on the red rock point the way of the Hangover Trail.

It's a long way down into Oak Creek Canyon is you make a false step on the Hangover Trail's singletrack.

The Munds Wagon Trail near the start of the run affords vistas that make the miles go by fast.