The question surprised me more than it should have. I didn’t know how to explain that I had come to the Sunnyside Stone Soup Community Dinner with no intention to eat. Even though this free dinner event was in its 10th year, it was my first time there.

“You brought your own?” Evans shot back.

“Okay, well we’ve got a lot of food, so you’re going to eat something. Here’s your bowl.”

She thrust me a paper bowl and a spoon and I stuttered an abiding thanks. Then she was gone, whisked away to get busy making sure everyone had what they needed to eat.

Once inside, I smelled the error of my ways. Turmeric, garlic and paprika filled the air. A delicious perfume mingled in the halls. It squeezed into the spaces between people, space already made smaller as everyone stood near the center of each room. There was no space for wallflowers. Each wall was guarded by crockpots that steamed atop fold out tables. An array of homemade soups and chili dishes flanked by butter and bread pressed the people together. Elbows rubbed left and right.

Mine first rubbed with Regina Salas. She was there as a soup-sponsor, one of about 20 people who volunteered to provide soup. Salas provided two.

“This is a sweet corn porridge,” Salas said, gesturing to a pot full of a creamy yellow-white delight. “And this is kind of a chicken with turmeric, an arroz calda.”

The golden spice of this arroz calda sizzled in my nostrils, and I couldn’t help but breathe it in deeply.

“It’s a healing soup,” Salas, explained; her grandmother’s recipe from the Pampanga Province of the Philippines.

She told me that her grandmother was adamant about sharing meals.

“Anyone who showed up at grandma’s would get food.”

Across the room, another set of family recipes simmered. Shannon Shoots brought a pot of abondigas and a pot of potato green chili. When I asked her why she brought these two soups, Shoots paused just long enough for a friend to interject.

“Because she’s really good at it!” they yelled, stirring some laughter. After trying a ladleful, I had to agree.

“They’re my mother’s recipes,” Shoots said, going on to explain that she grew up in southern Arizona and thought the Mexican flavors of her childhood would be a good choice for her first time as a soup sponsor. Like me, she had just heard of the event this year.

“I was actually at the Flagstaff Women’s Leadership meeting this last week and Coral had messaged, and we were like yeah, count us in,” Shoots said.

For her first time at Stone Soup, Shoots already knew the community. “Jackie’s a real estate agent, I work for the president of NAU,” she said, pointing down the hall. “Janet, who made the chicken posole, she worked for APS. She’s retired.”

As Shoots named her friends, I looked around the rooms. They were filled with color, a full spectrum of foods and faces, sizes and ages. The longer I looked, the more people arrived. Children, parents, teenagers and elders filed in to get fed.

Among the elders, I saw a face I recognized, the indomitable smile of Marina Vasquez. I greeted her we sat down together over a bowl of her bean and meatball soup. I asked her what she thought of this event.

“Well first of all it’s a community event, which I love," she said. "It engages the whole. Poor, and rich. And then you have the opportunity to test different soups!”

She grinned, and while I agreed that good food was its own reward, Vasquez made it clear that there was more to it than that.

“Republicans and Democrats, they can eat together,” she said. “And why not? Food is culture, and it’s so important to share. The different cultures that get together in here, they can start a conversation if they want to.”

Vasquez knows about cross-cultural conversation. She grew up in Guatemala and did not move to the United States until she was already grown. English is far from her first language, but she speaks it comfortably, with a well-earned confidence. When she’s not making soup, she’s making medicine.

The two things may not be so different. Soup sponsor Abbey Caballero added a little extra spice to her soup.

“It really helps clean you out,” she said, waving her hands over her sinuses. While Caballero did not set our specifically to make a medicinal soup she recognized that many sponsors had. “Hopefully clean the world!”

When I asked Abbey Caballero what she thought about the way a comfortable cross-cultural community might be built on soup, she said it was biological. From her perspective as young counselor, she said that deep down, we know that shared food is security.

“It’s our amygdala. Our amygdala tells us we’re hungry, be fearful.”

To Caballero, even nonhumans have a deep agreement to share peace over nourishment.

“You see it in animals on Discovery Channel shows,” she said. “No matter if it’s a leopard and a deer, they’ll come in and drink water together because they know that’s a place of safety.”

Caballero was on to something. The Stone Soup Community Dinner was nothing if not safe. Trust is the first ingredient of all shared food. Among the bowls and spoons children wandered free from their parent’s watchful grasps. Strangers sat down together and smiled. There was a guard at their door, but their only duty was to make sure everyone was welcomed and fed.

Eventually, I circled back to Evans. Now that the dinner was underway and people chattered happily, she seemed to have a little more time to talk.

“Have you heard the story about stone soup?” she asked. I had, but I asked to hear it in her words.

She regaled to me a tale that originated in Europe but has since been translated into the folklore of many traditions.

Basically, the story goes that some hungry travelers come to a town that is locked down. They are very hungry when they arrive but find the townspeople unwilling to share. Everyone believes that they don’t have enough to feed the hungry travelers. So, they go to the middle of town and begin boiling a large pot of water. When they drop a large stone in the pot, a curious townsperson asks what they’re doing, to which they reply “We’re making stone soup, and we’re happy to share. It’s delicious but it could use a little garnish.” With this, they convince the townsperson to contribute a carrot, then someone else puts in an onion, another a potato, so on and so forth.

“And so, before you know it, the whole community is out there, and they’re watching this pot, and they’re a part of it,” Evans said, getting to the moral of the story. “There’s always enough for everybody if we come together and say, 'Hey, let’s do this.'”

The Sunnyside Stone Soup Community Dinner is meant to bring this fairy tale into the Market of Dreams where it can be a lived reality. Evans estimated that they would feed roughly 200 people that night. They had fed at least as many in the past, and while last year the event was stunted during the pandemic, this year it returned and even surpassed former glories.

While I came into the Sunnyside Stone Soup Community Dinner with every intention to be a fly on the wall, I quickly found that this was not a neighborhood that would permit such passive involvement. To pass through those doors was to be embraced in a loving community and granted all the rights and responsibilities therein. Next year, I’ll invite my family. Maybe even bring a soup.

At the very least I will remember to bring a bowl, and rest assured it will be filled. There’s always enough for everybody.

Airbus A340 plane lands in Antarctica for the first time

Matthew McConaughey will not run for governor of Texas

Matthew McConaughey will not run for governor of Texas 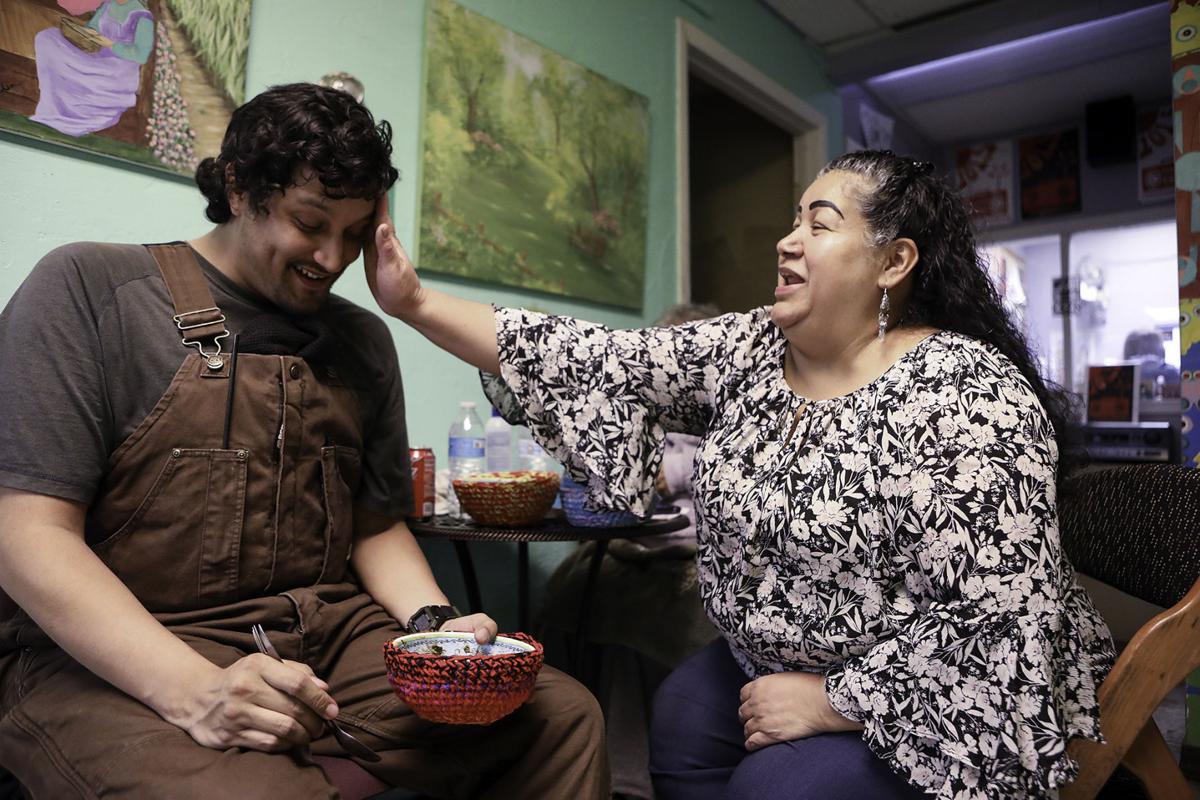 María Castillo-Rincón checks for sweat on the forehead of Daniel Aguirre after he ate a spicy bowl of soup at the Market of Dreams Monday evening. The market hosted it's 10th annual Stone Soup Community Dinner event, during which folks throughout the community made and brought soups and stews to be enjoyed by all. 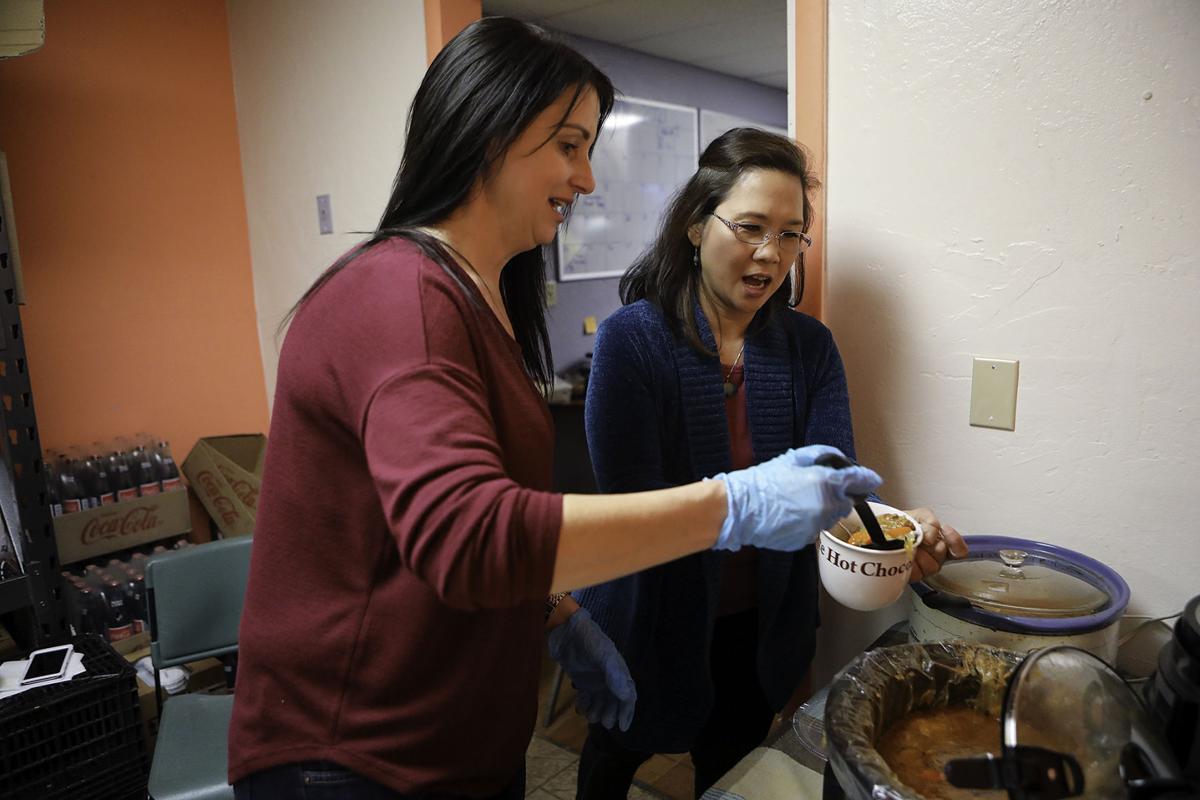 Shannon Shoots serves some of her homemade soup to Councilmember Regina Salas at the Market of Dreams Monday evening. The market was hosting it's 10th annual Stone Soup Dinner. 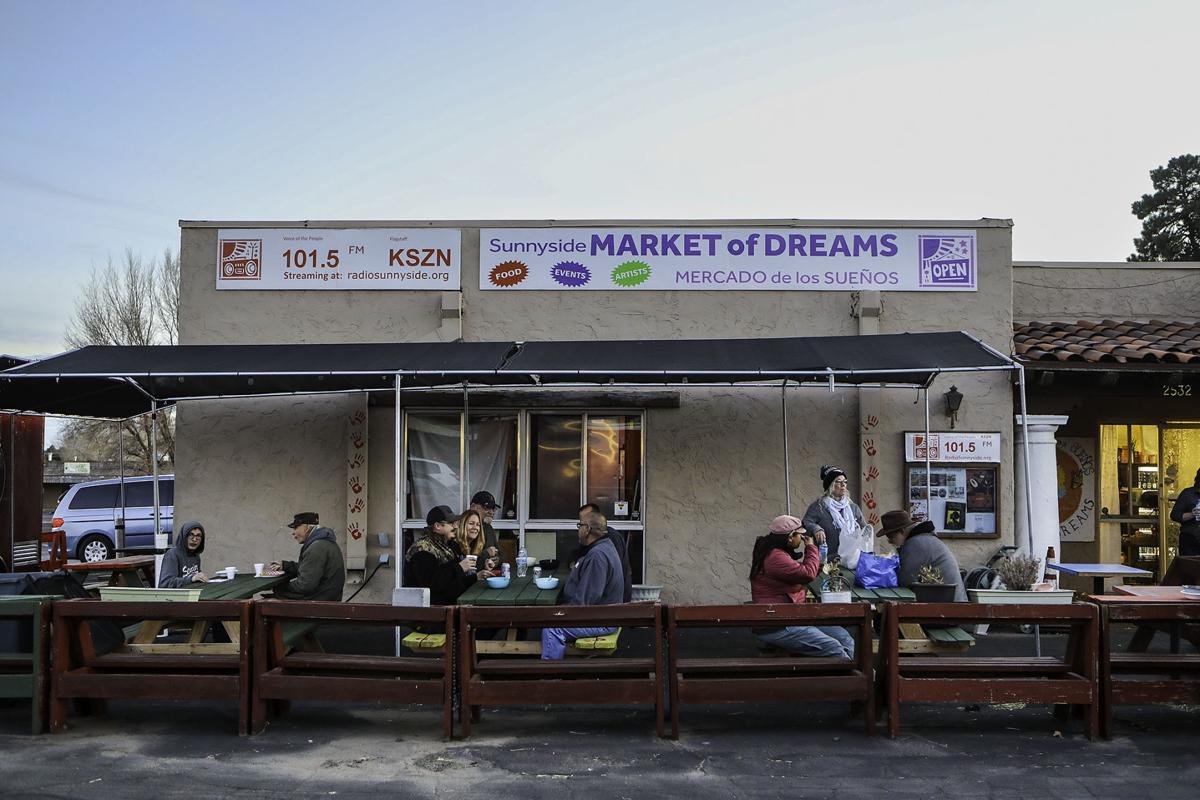 A small crowd enjoys various stews and soups outside of the Market of Dreams Monday evening.