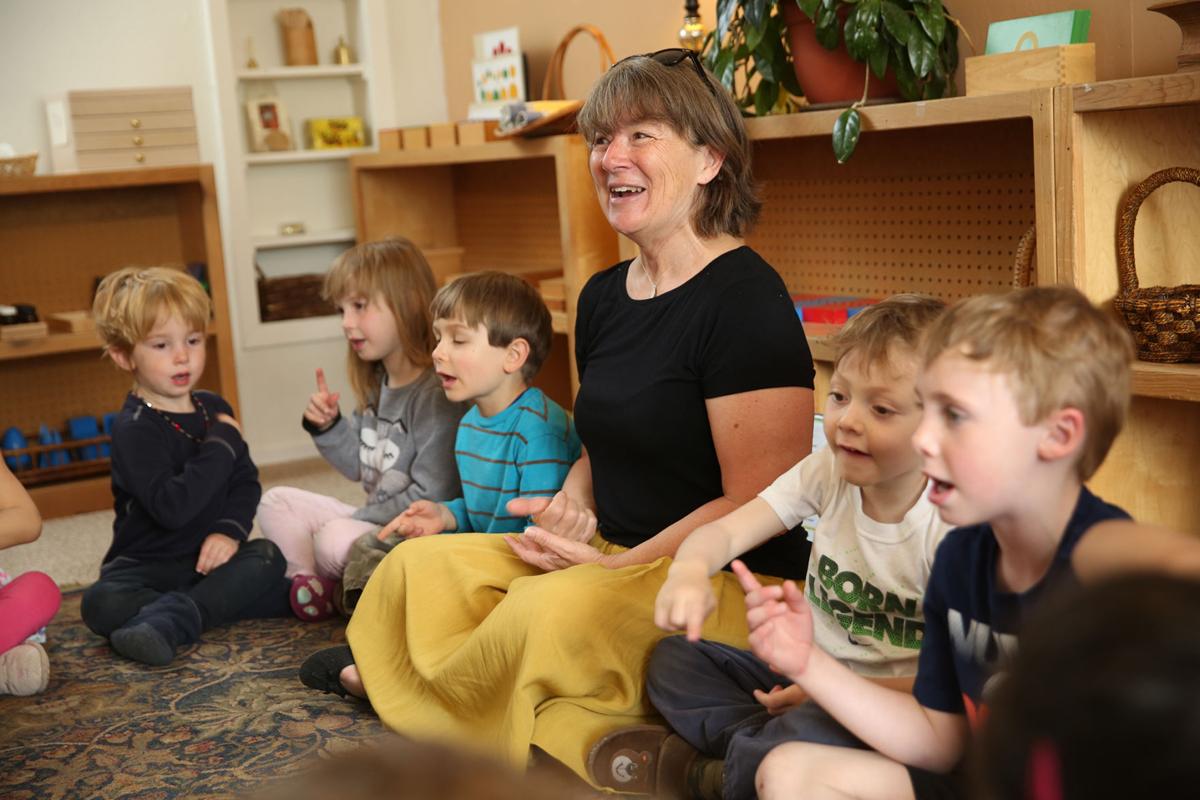 Sheryl Doolittle sits surrounded by her students at the Bambini Montessori Preschool in this 2017 photo. After 13 years, Doolittle closed the preschool, which had served more than 230 families. 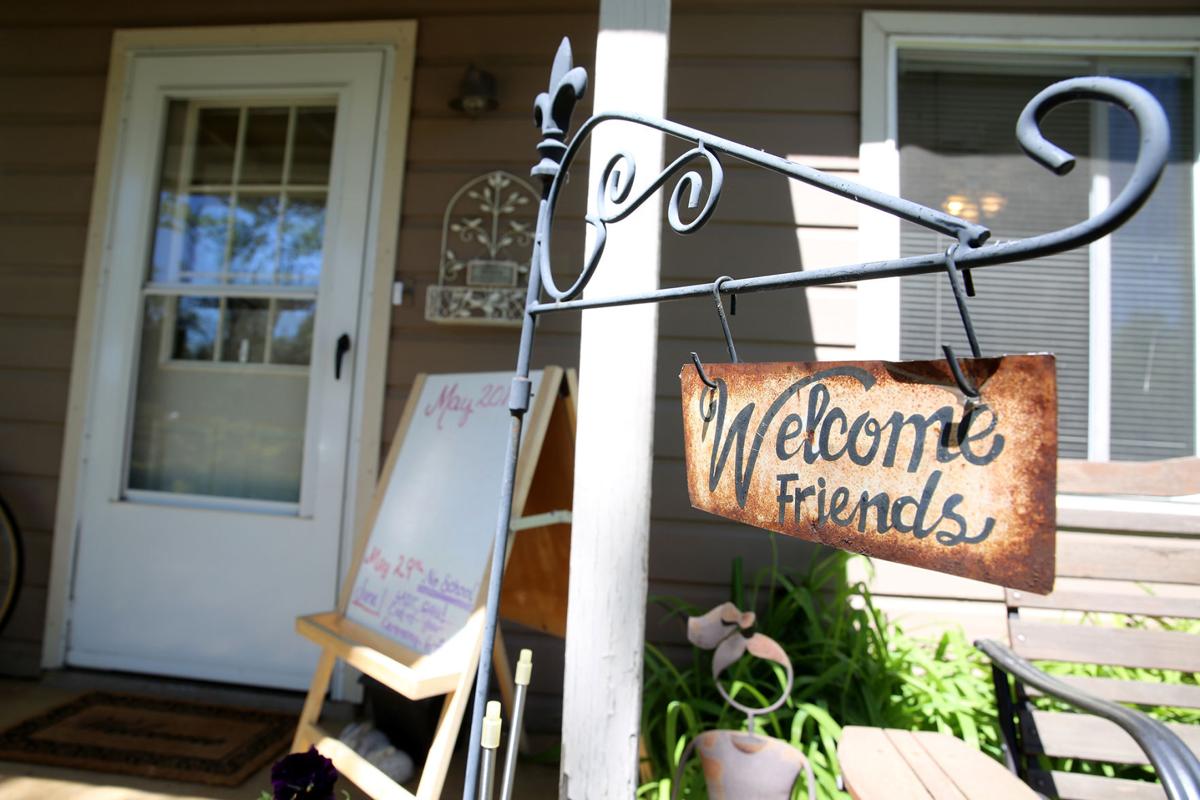 For 13 years the Bambini Montessori Preschool offered a warm welcome to more than 230 families. The school has now closed. 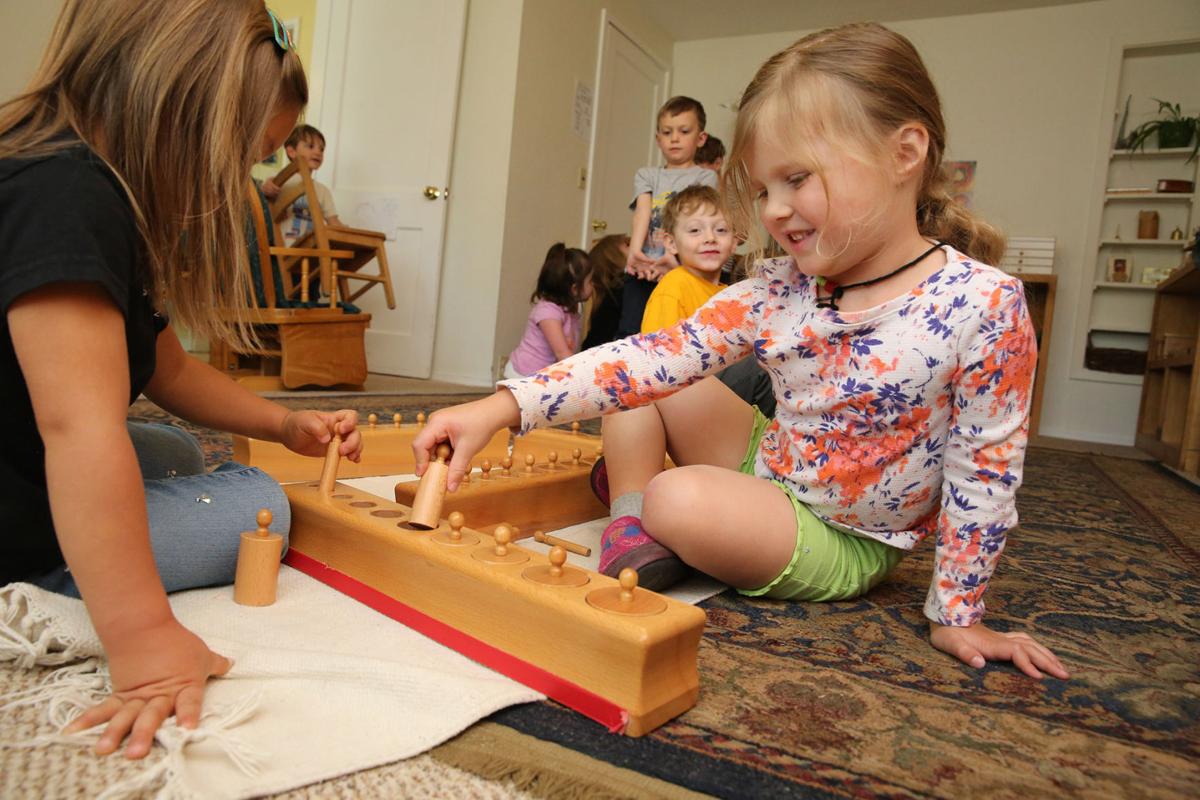 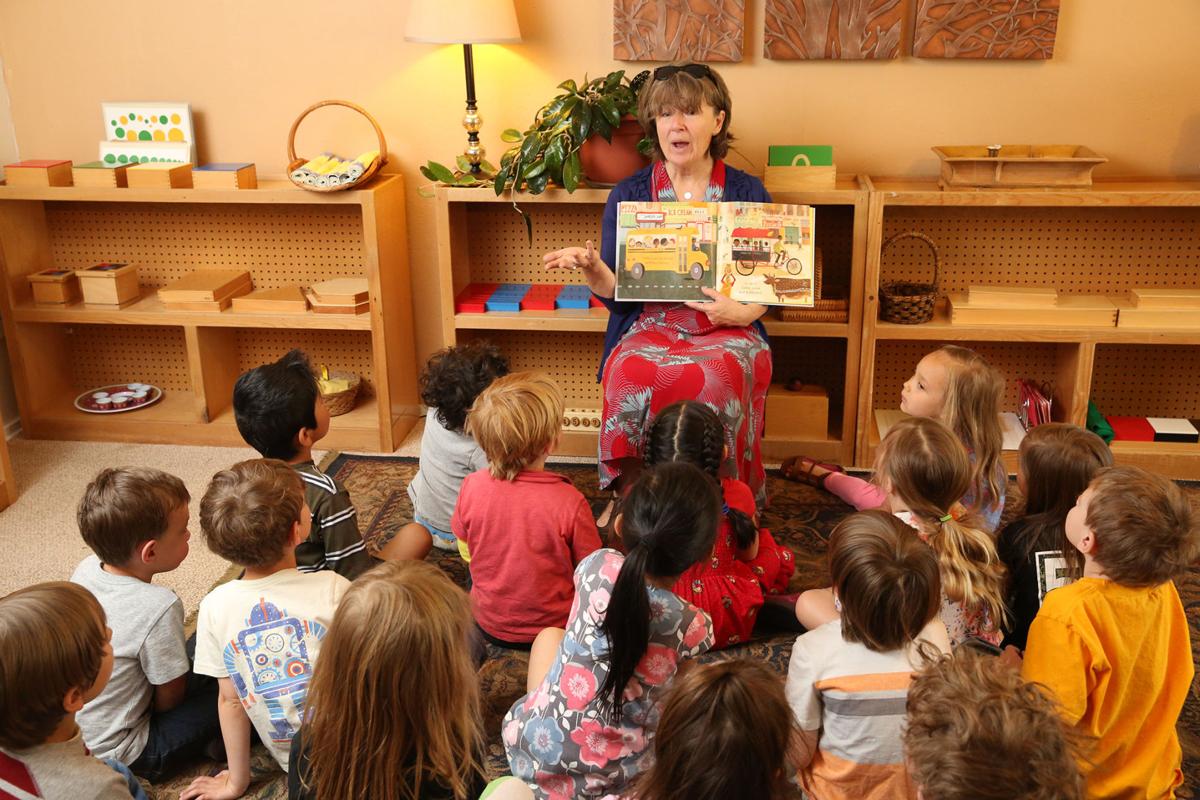 Sheryl Doolittle sits surrounded by her students at the Bambini Montessori Preschool in this 2017 photo. After 13 years, Doolittle closed the preschool. 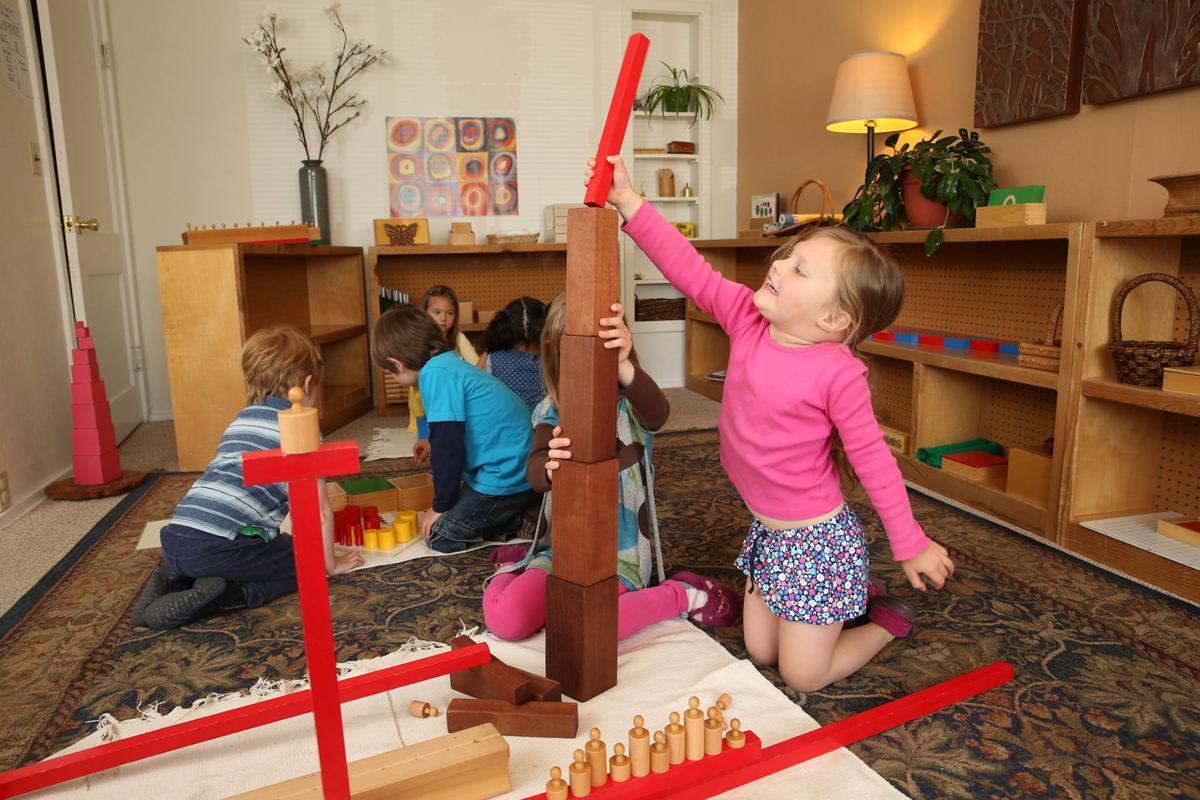 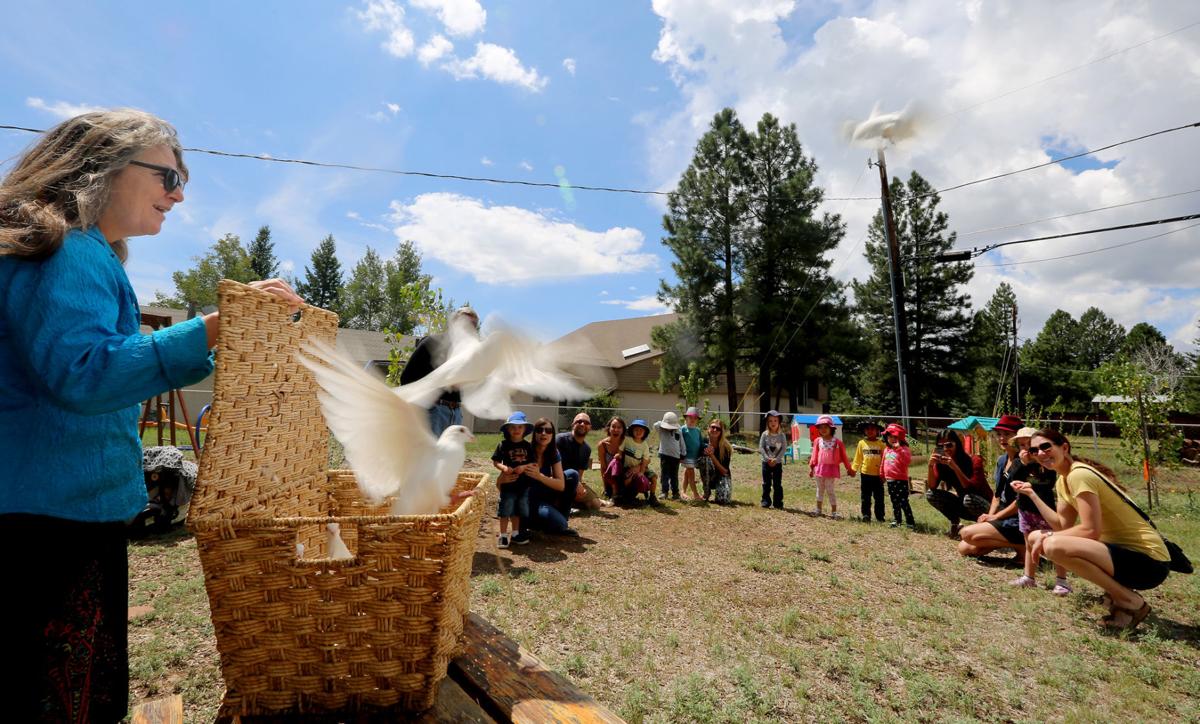 In this 2015 file photo, Sheryl Doolittle releases a basket of doves as part of a celebration of the birthday of Maria Montessori at the Bambini Montessori Preschool.

As a business, the little Montessori preschool tucked into a church-owned house on North San Francisco Street wasn’t exactly lucrative.

But for teacher Sheryl Doolittle, it was what she had always wanted.

“It had been a longtime dream for me, to open a Montessori preschool,” Doolittle said. “I’d been working with Montessori schools in the past, in Phoenix and in Sedona and in Flagstaff, and I just had a vision of what it could be — what Maria Montessori originally envisioned.”

After 13 years and more than 230 families, though, Doolittle made the announced last month that the school would be closing due to financial strains brought on by COVID-19. The pandemic was the last straw atop longtime enrollment concerns as Bambini worked to compete with Flagstaff’s larger Montessori schools.

“This was not about having a business. This was about my life’s work and meeting the needs of families and especially the children,” Doolittle said in a phone interview with the Arizona Daily Sun, her tears audible in her cracking voice. “It’s been an incredible journey. … I don’t know if I can put it in words. It’s so big to find your life’s work and to be able to let it unfold every day.”

She sniffled at the thought of a future without new bambinos.

The tears lasted only moments, though, until Doolittle remembered something about the school that made her smile, her voice picking up tempo as she described Bambini traditions such as the school’s renowned singing as well as birthday celebrations where each child would walk around a globe for the number of times they had been on Earth.

She spoke of Maria Montessori, the late 19th-century Italian physician and educator, like an old friend, reciting some of her philosophies on early childhood education as if they were commonplace.

“Montessori education, it’s a philosophy. It’s a beautiful, holistic philosophy,” Doolittle said. “It’s not about preparing 3- to 6-year-olds for kindergarten. That’s such a disservice. I don’t even like the word ‘preschool.’ It’s about preparing them for life. The seeds we plant at this age, the brain development that happens at this age, is immense.”

Though Doolittle has taught all the way up to high school in her three decades as a teacher, she always came back to these young learners.

“This is the foundation, this is where it starts. Montessori said — I really love this and it is so contrary to what our society espouses — she said, ‘the best for the youngest.’ We don’t save it up for university studies, we create this beautiful, beautiful nest of learning for each individual child, the best for the youngest,” Doolittle said. “It still gives me the chills after 30 years.”

Doolittle said she was pleased to be able to support so many diverse Flagstaff families, from doctors and lawyers to teachers and single moms, by spending her days with their children, many of whom had special needs.

Parents said they noticed the Bambini difference the moment they walked in the door.

“We went to two different preschools before Bambini, and it was just chaotic and loud and we didn’t feel good about leaving our son there,” said Danielle O’Connor, whose son, Finn, 8, and twin daughters Amelia and Emerson, 5, attended Bambini. “And then we found Bambini and it was the total opposite. It was like a little sanctuary, almost. It was this small, cozy, intimate school.

“Even when you would go into the building, there were little chimes hanging on the door, music playing. As a parent, a lot of times it had a calming effect on me when I stepped into the school, especially after the hectic morning rush trying to get the kids ready and out the door and getting to work.”

The small, coziness of Bambini similarly worked well for Alisha Witcomb’s son, Samuel, who is now 8. The entire family appreciated the community of Bambini, where they still have close friends even years after their son graduated from the program.

“You don’t find that in schools often,” Witcomb said. “I remember the first time going in there. It was so calm. All the kids were doing projects and seemed happy. It was a very open and inviting place.”

Of all the memories associated with the school, parents particularly remembered coffee time where they were invited to watch their kids at work, completing their daily activities and even serving them coffee and snacks, the lessons in manners and especially the singing.

But they said the real value of the school wasn’t the classroom philosophy as much as it was Doolittle herself.

Adrianne Dienno’s twin daughters, Emi and Ona, 4, were scheduled for one more year at Bambini when the closure was announced.

Dienno said she had felt very anxious about sending the girls to school when they were just 2 years old and was recommended Bambini by a friend.

“She was like, 'You have to go check out this school and you’ll feel great after you see it.' So I did and that was exactly how I felt. There was no one else in the world I would rather trust my kiddos with than Miss Sheryl. It felt like home when you go in there,” Dienno said. “She puts the kids ahead of everything else. She just loved them and she’s extremely protective of them -- which is wonderful. It’s what you want: someone to love your kids like you do.”

The school began 13 years ago in the Unitarian church on North Leroux Street with just four children, including Doolittle’s grandson, Liam, who is now nearly 18.

And despite the church’s majestic tall ceilings and windows, when the school had to find a different location, the replacement space Doolittle found, a house owned by Shepherd of the Hills Lutheran Church, was more fitting.

“We ended up in this house setting and it was really, ultimately, a great unfolding because it was this cozy, homelike environment. Maria Montessori originally talked about her first school [which opened in 1907] and called it the children’s house, Casa dei Bambini. That’s where Bambini comes from,” Doolittle said. “That’s another special thing about Bambini Montessori School. It was really this cozy, homelike transition for 3- to 6-year-olds from being at home to the preschool setting to larger schools.”

The last day class was in this building was in March, when schools were closed statewide to prevent the spread of COVID-19. The class met through Zoom through the end of the year.

As schools throughout the country start their academic years virtually, Doolittle says she’s not sure what comes next for her.

She said she considered teaching a small group of kids in a home setting, but with the current state of the pandemic, it doesn’t seem possible for this year. She’ll be selling her classroom materials at the end of this month and hopes they can go to other teachers in the region to help carry on the spirit of Bambini locally, much like its students and families have.

“There are Bambini kids of such a span of ages in Flagstaff and out in the world that are making a big difference. They’re these kindhearted, generous, serious learners,” Doolittle said. “Bambini was like this little, shining light that still fills me with love and gives me the goosebumps. The Bambini family: it’s big.”

Bambini Montessori will have its “Closing the School Sale” Friday, August 28 and Saturday, August 29 from 7 a.m. to 1 p.m. to sell its Montessori educational materials as well as furniture in order to empty the building.

A kitchen-table-turned-workspace would no longer be adequate, Heather Brown decided this summer as she and her two sons prepared for a remote …

A group of Williams Unified School District students returned to school on campus Monday, a week after beginning classes for the 2020-21 acade…

Sheryl Doolittle sits surrounded by her students at the Bambini Montessori Preschool in this 2017 photo. After 13 years, Doolittle closed the preschool, which had served more than 230 families.

For 13 years the Bambini Montessori Preschool offered a warm welcome to more than 230 families. The school has now closed.

Sheryl Doolittle sits surrounded by her students at the Bambini Montessori Preschool in this 2017 photo. After 13 years, Doolittle closed the preschool.

In this 2015 file photo, Sheryl Doolittle releases a basket of doves as part of a celebration of the birthday of Maria Montessori at the Bambini Montessori Preschool.