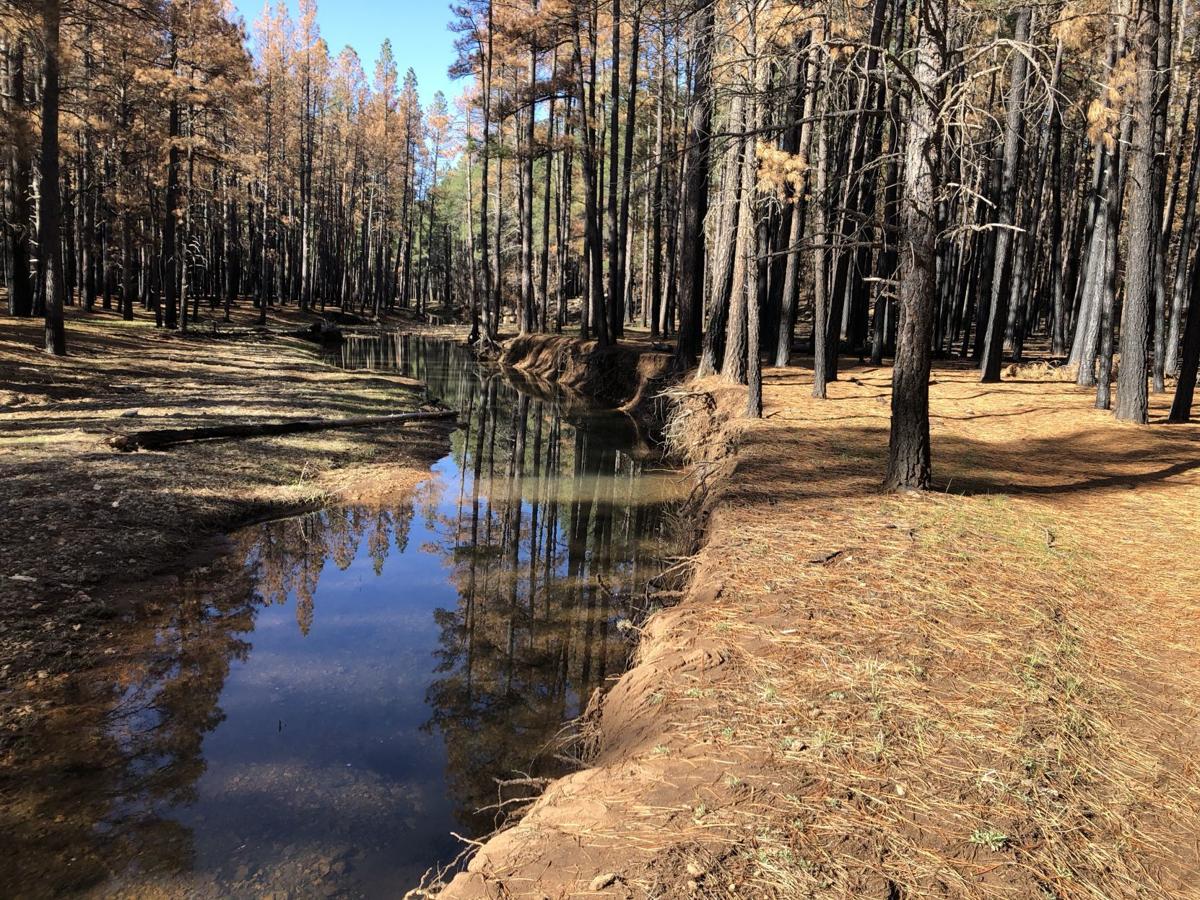 Portions of Frog Tank Loop run along a stream in a gorge, and at several points, you make crossings. 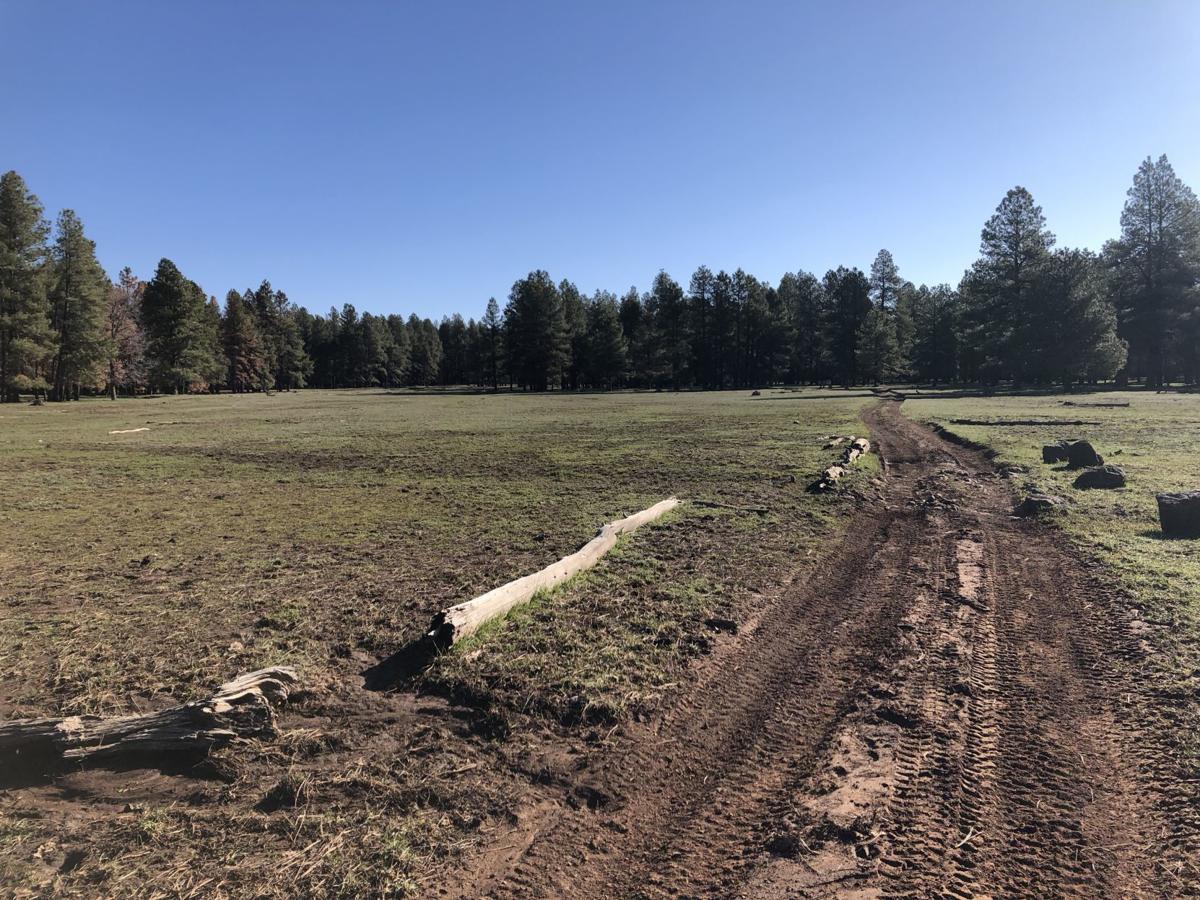 Much of the Frog Tank Loop in Munds Park is tree-lined, but halfway through, the trails opens into a big meadow. 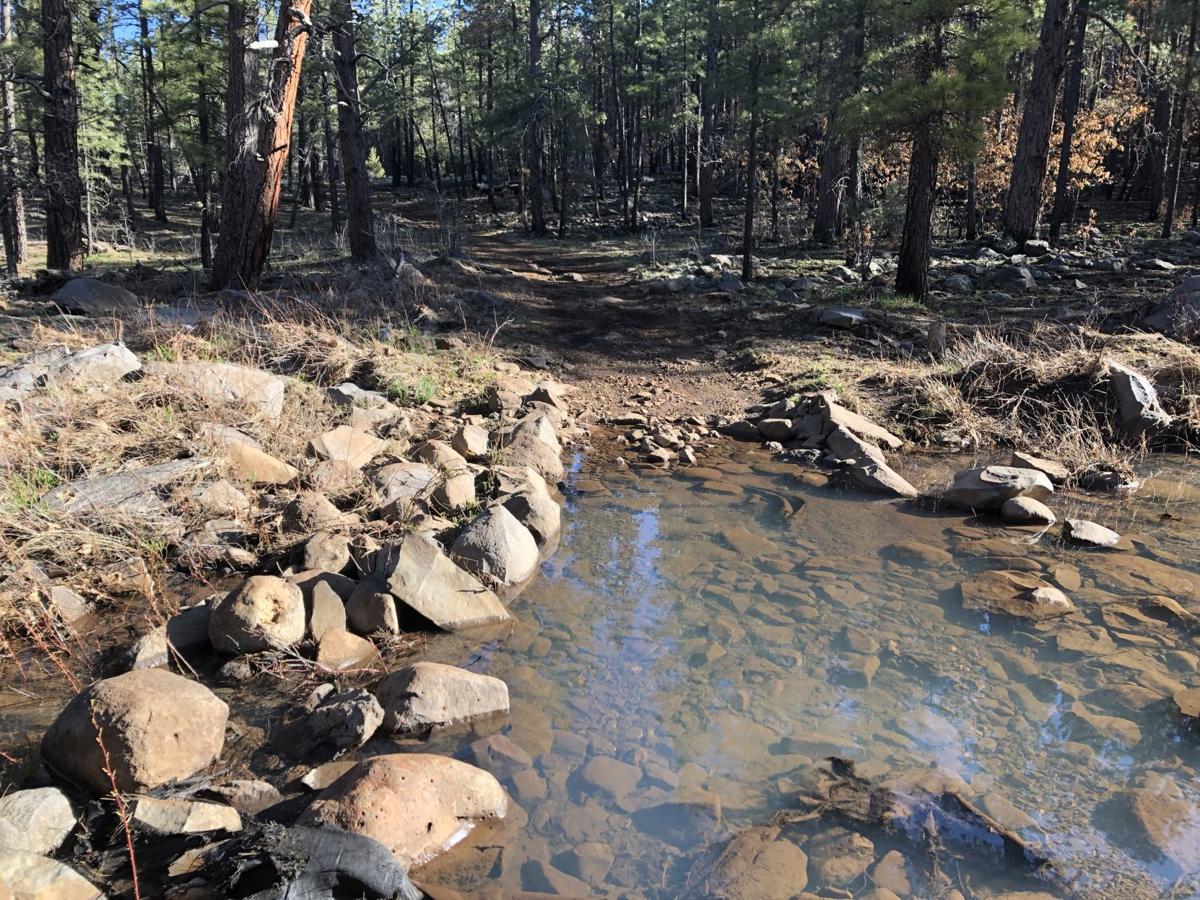 There are several stream crossings on Frog Tank Loop in Munds Park. 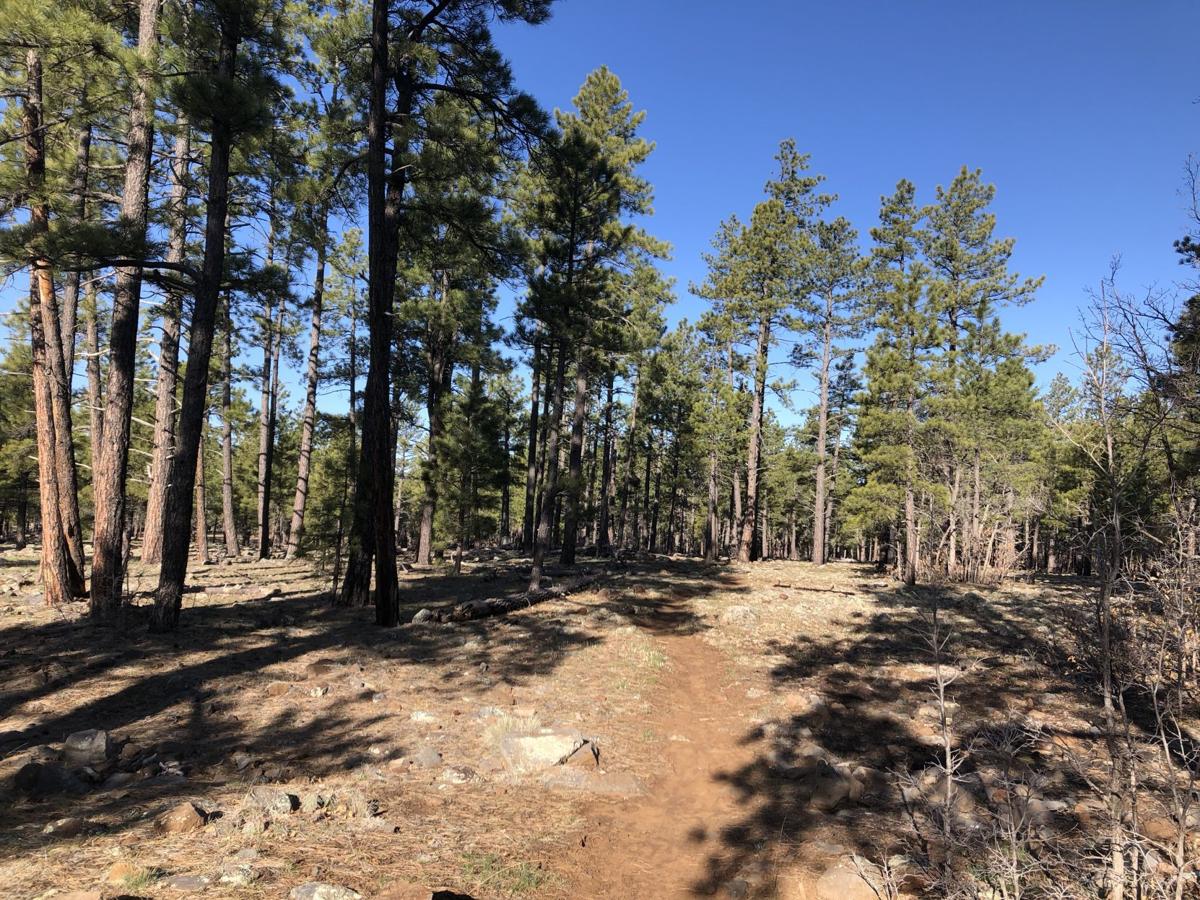 Brad's Trail is a 1-mile connector from the Iron Springs Trailhead to Frog Tank Loop. 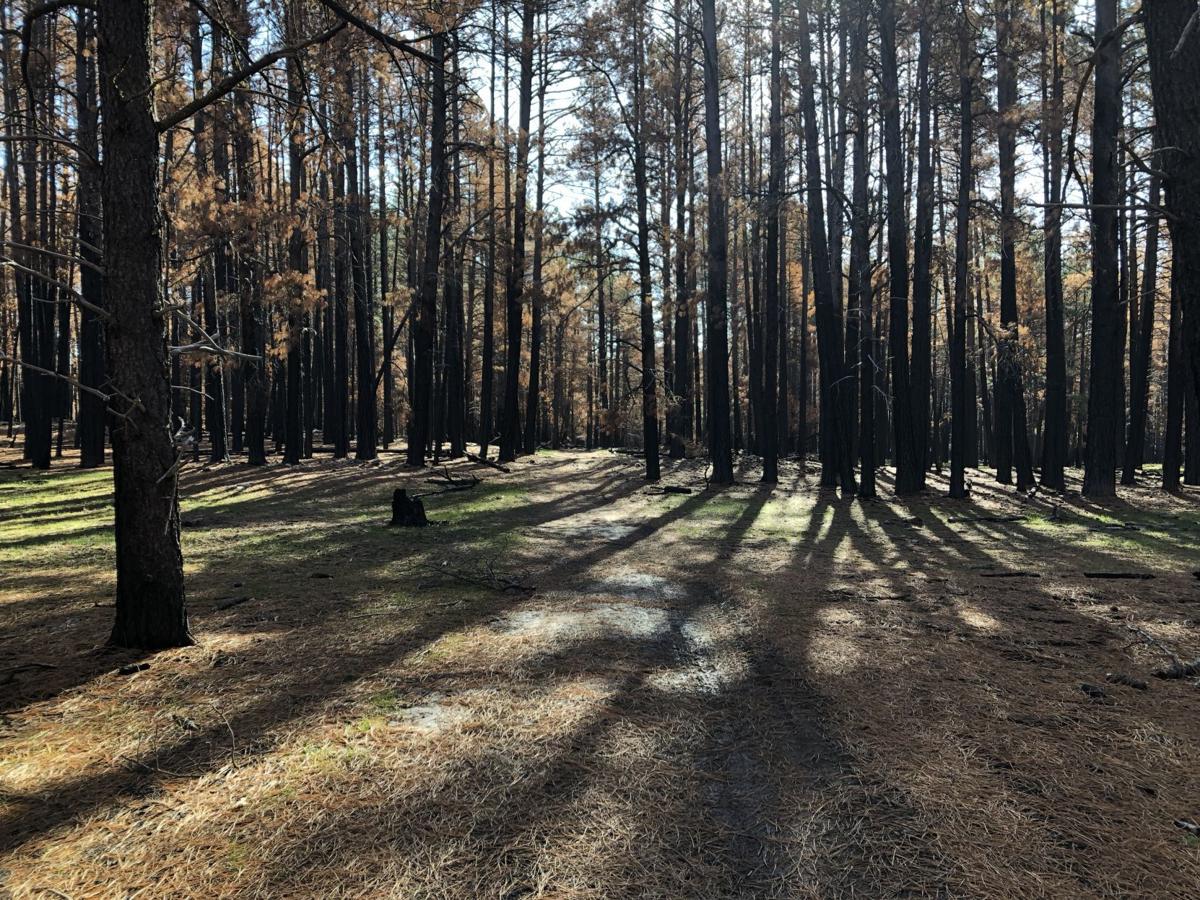 Stands of Ponderosa Pines, some charred by fire, line the Frog Tank Loop in Munds Park.

Too often, we enjoy traversing a trail and don’t for a moment think about its construction, its history, the people and pickaxes behind the effort of carving paths so that the forest, in toto, is not trampled.

In Munds Park, they do not take such things for granted. At the Iron Springs Trailhead, launching point for a Hydra head of trails, sits a kiosk that pays tribute to a band of locals that, years ago, formed to forge along with the Coconino National Forest a network of multi-use trails as well used as it is well laid out.

The impetus for the formation of the Munds Park Trail Stewards (MUTS, they self-deprecatingly like to call themselves) came after a U.S. Magistrate in 2001 levied fines at people for illegally carving trails in the national forest land on the outskirts of the village and damaging the environment. As a result, the forest service reached out to Munds Park residents in hopes of teaming to build sustainable trails. In the years since, MUTS has worked to transform the land into a recreation area that maintains the essential nature of the forest.

So, with that hat tip to the MUTS folks, we present the jewel of the Munds Park trail system: Frog Tank Loop.

It’s a 3-mile journey on wide double-track — yes, it’s open to ATV traffic — that features a little bit of everything. Combined with the mile-long, singletrack Brad’s Trail that gets you to Frog Tank, the trek measures a tad more than 5 miles. Want to go longer? There are other forks and paths from the Iron Springs Trailhead, about 22 miles in all, so knock yourselves out.

But we contented ourselves with a nice brisk 5-mile run on the lollipop loop — and, on a sunny Sunday morning, encountered only three hikers and not a single revving engine, so it was easy to practice social distancing.

A brief digression about the multi-use aspect of Frog Tank: Trail purists might consider it a deal-breaker, having to share the path the ATVs. And, sure, we can sympathize. But MUTS wanted to open the trails to as many folks as possible in this community of mostly part-time residents who descend in summers to escape the Valley swelter, and apparently off-roaders make up a significant faction.

The alternative, after all, is no public access, so we’ll take it. (Helpful tip: If you go early enough in the day, you’re likely to avoid the ATV crowd, not to mention the mountain bikers.)

At the trailhead, you have the choice of taking Brad’s Trail, a rocky single-track not open to motorized vehicles, or the Frog Loop connector, a smoother path open to traffic. Both are a mile long and drop you off at roughly the same spot on the loop. For anyone being powered by their feet alone, we recommend Brad’s Trail, a flat stretch that winds around Ponderosa pines before descending to the more lush area where the loop picks up.

There’s a brief tribute to the “Brad” of Brad’s Trail at the kiosk. It was named for the late Brad Brunsell, a trail crew regular lauded for his sense of humor and persistence: “Brad did not comprehend the phrase, ‘That rock is too large to move,’ and, yes, he could move those large rocks.”

It’s ironic, then, that Brad’s Trail has the rockiest footing of any stretch of this 5-mile trek, with scores of rocks to dodge or use as launching pads. Maybe this was Brad’s posthumous joke on us all — or maybe we don’t appreciate the ginormous boulders that Brad and crew did excavate to make the trail as navigable as it is.

All of this is to say that the Frog Tank Loop is pretty smooth going, once Brad’s Trail is behind you. It’s mostly double-track and, rather than rocks, the only real obstacles for footing are the ruts left by tire tracks. In mid-April, there remained some standing water from snow melt and rain, so some puddle-dodging was needed.

But this is quibbling. The path is easy enough to bring the kids, with barely 200 feet of elevation gain. That doesn’t mean there trail is boring, though. Far from it.

In just three miles, you traverse stands of stately pines and other coniferous clump, cross several gullies that will get your shoes wet, emerge into a brilliant, verdant meadow that kind of pops up after a slight uphill, and travel parallel to a rocky gorge that on this day was flowing with runoff.

And, of course, there is the trail’s namesake: Frog Tank. It lies smack dab in the middle of that meadow, a stopping point for birds and wildlife — though, alas, we heard no frogs at Frog Tank. Signs keep you from getting too close to the pond, so it’s best to admire it from afar and be on your way.

Speaking of signs, let’s end this with another hat tip to the MUTS volunteers. The signage along Frog Tank makes it nigh impossible to lose your way. There are arrows and markers showing how many miles to the next junction, as well as signed offshoots to connecting forest roads.

Next week: We will travel slightly farther afield in Munds Park to the Crystal Point Trail, another gem and this one not open to revving engines.

Driving Directions: From Flagstaff, go south on I-17 to the Pinewood exit in Munds Park. Travel east and turn left onto Crestline Drive. Continue onto Oak, then make a right at Iron Springs Road. The trailhead is 0.2 of a mile after the cattle guard.

The Route: From the trailhead, head west on Brad's Trail for 1 mile. At the "T" junction with the Frog Tank Loop Trail, turn left (south) and follow the loop as it heads north, beyond the junction for Janice Place. After about 1.1 mile, entering a meadow, look to your right (east) for Frog Tank. Continue north and slightly east on Frog Tank through a wooded area and make a sharp right (south) at the gorge to remain on Frog Tank. Follow it to the junction with Brad's Trail and retrace steps to the trailhead.

Portions of Frog Tank Loop run along a stream in a gorge, and at several points, you make crossings.

Much of the Frog Tank Loop in Munds Park is tree-lined, but halfway through, the trails opens into a big meadow.

There are several stream crossings on Frog Tank Loop in Munds Park.

Brad's Trail is a 1-mile connector from the Iron Springs Trailhead to Frog Tank Loop.

Stands of Ponderosa Pines, some charred by fire, line the Frog Tank Loop in Munds Park.