This rendering shows some of the tipis, wagons and cabins proposed at Two Guns Resort. 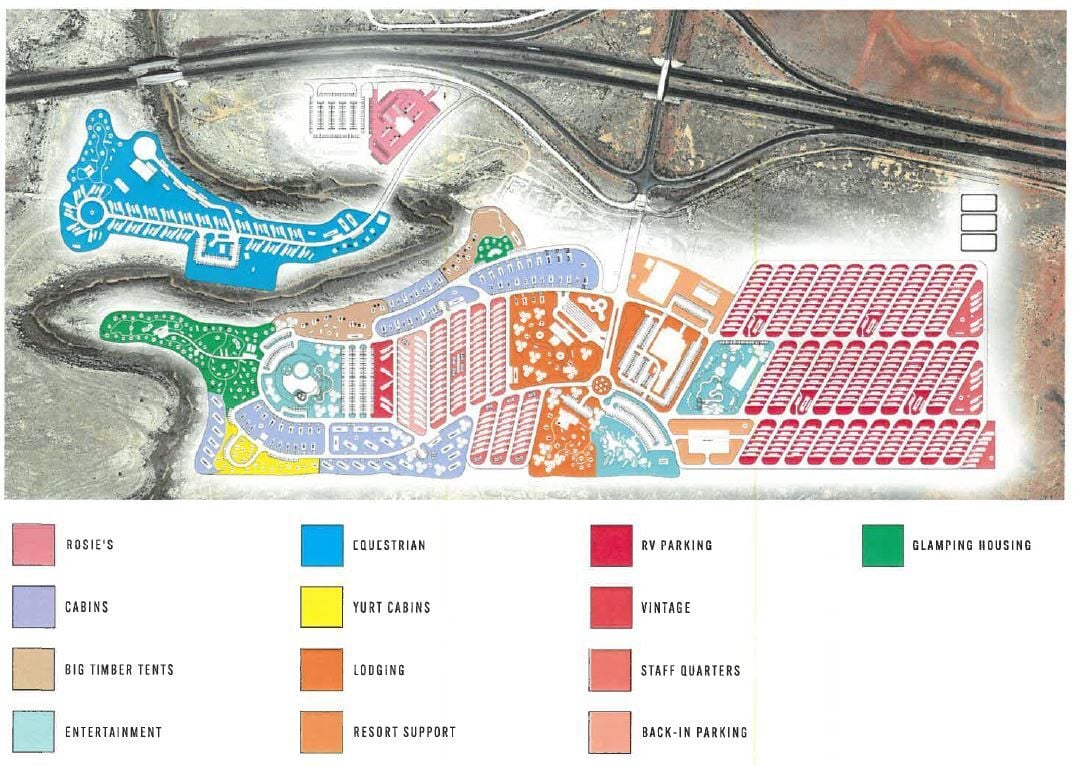 Several different types of lodging have been proposed for the Two Guns Resort.

It all came down to the tipis for the proposed Two Guns Resort 28 miles east of Flagstaff during a meeting of the Coconino County Board of Supervisors Tuesday evening.

After about three hours of discussion and presentations from county staff and the developer regarding the zone change and development plan for the project, the board delayed its approval of the glamping resort project at the Two Guns interchange on Interstate 40 for cultural reasons, instead voting to continue its discussion sometime after the first of the year.

Plans for the resort, to be developed by Indiana-based Gunderman Designs & Concepts Inc., specify 787 total lodging units, including 395 recreational vehicle sites, 78 tipis, 43 wagons, 98 cabins, 19 yurts and a 13-unit Cliffside hotel. The resort would also include a Route 66 drive-in theater, steakhouse, water park, pet resort and helipad, as well as a military museum and Native American memorial.

The 247-acre parcel is intersected by Diablo Canyon and contains historic features including old segments of Route 66 and remains of a zoo and KOA campground, as well as the Apache Death Cave, the site where in 1878 members of the Navajo tribe retaliated against the Apaches for a murderous raid by setting fire to the entrance of this cave where they had taken cover, killing all 42 of them.

“There’s a lot of just amazing pieces to this property,” developer John Gunderman said Tuesday. “If it didn’t have Route 66 or if it didn’t have the Canyon Diablo, or any of these other things that are on this property, I wouldn’t even be looking at this. … This is my dream. I have put all my love, everything I own into this thing over the past two and a half years.”

Gunderman said the plan for the business also includes giving some of the profits back to community charities.

According to current conditions required for the property’s zone change to Resort Commercial, development within the canyon, which serves as a wildlife corridor, would be prohibited and the developer would need not to only submit the findings of an archaeologist's cultural resource review but also consult with the Navajo Nation, Hopi tribe and applicable Apache groups regarding this development. Current plans include sealing off the Apache Death Cave.

Other conditions established by the Planning and Zoning Commission include using shielded amber LED lighting, contracting with the Winslow Fire Department for fire and EMT services and establishing an onsite wastewater treatment system.

Tuesday, developers requested exemption from several of these conditions, particularly one that would require a 50-foot setback and barrier from the canyon’s edge. At one point, Gunderman said he would walk away from the project if a compromise on the size of the setback was not reached.

Supervisors did grant this request, though, allowing a 20-foot setback that applies to undisturbed areas of the canyon edge — previously disturbed areas where existing structures will be retained, as well as observation points, can be closer to the edge if safety barriers are created.

Developers were also initially concerned about the prohibited use of the helipad for tours but were willing to return for reconsideration of this item in the future.

Despite the agreements reached on these items, tensions were clear between the developer and the board after Supervisor Lena Fowler suggested expanding the required cultural resource review because of the location of the proposed resort, expressing her displeasure with the tipis and wagons for lodging, which contrast with the intent of the planned Native American memorial.

“If you’re truly going to respect and honor the Native people, then do so,” Fowler said. “Don’t be building something that just really is a stereotype again. It’s very demeaning to us, and I don’t like seeing that on the interstate driving back from Window Rock back to Flagstaff or along that corridor like that. I would ask that of the developers: really learn about the local people, learn about us. We are a proud people. We have our language, we have our way of life, we have our culture, we have our arts and we are very smart and we want to reflect who we are today.”

Fowler suggested a revision to the conditions for approval that would require consultation with Northern Arizona University, tribal historic and tourism offices and museums to ensure local indigenous peoples are honored through the development, but the developer pushed back, arguing that the tipis are a part of the glamping industry as seen in campgrounds in Flagstaff and Williams and, because the tipis make up about a quarter of the project’s permanent lodgings, the site plan would need to be completely reworked.

“Yes, we want to work with the Nations; however, this is not just a cultural project. It is something that we would like to honor the cultural and the social aspects of. So I think we need to find a balance and the differentiation between the two,” said project engineer Krishan Ginige.

Although Supervisor Jim Parks suggested approving the plan with the understanding that a later update would need to be made to the tipi area, the action was decided against because it would require the developer to restart the planning and public hearing process.

At the end of the discussion, Board of Supervisors Chair Liz Archuleta clarified that, by delaying the project’s approval, the board is not asking for a historic project, but is asking the developer to make an attempt at cultural relevance.

“We’re asking that you recognize the sense of place where you’re at in Coconino County and that we hope that there be value in that people who would come to your development and your area of hospitality would also find value in that,” Archuleta said.

She added that the supervisors would continue to work with the project team if they made a sincere attempt to revise the plans before returning to the board likely sometime in February or March, unless the board holds a special session to accommodate the numerous large developments up for considering in the New Year, including the Happy Jack Lodge and RV Park.

A development on High Country Trail that was shot down last year by the Planning and Zoning Commission is ready for a second try. The Aura dev…

Shadow Mountain Village to open in Bellemont in early 2021

Shadow Mountain Village, a 94-unit townhome community in Bellemont, is nearing completion, with its first residents set to arrive this spring.

The first phase of steep slope treatment on Bill Williams Mountain is being completed, with the successful thinning of 300 acres of dense stan…

This rendering shows some of the tipis, wagons and cabins proposed at Two Guns Resort. 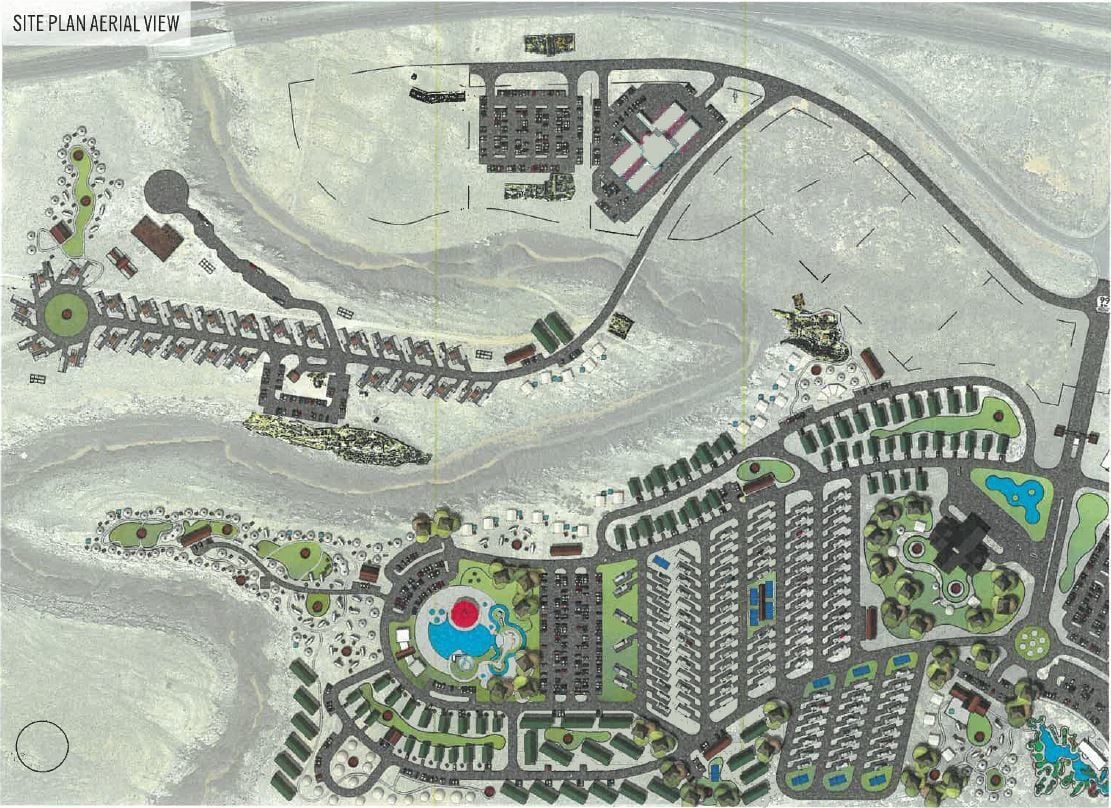 The site plan for the Two Guns Resort is shown in this image. Diablo Canyon cuts through the property, which also contains old segments of Route 66 and remains of a zoo and KOA campground, as well as the Apache Death Cave.

Several different types of lodging have been proposed for the Two Guns Resort.