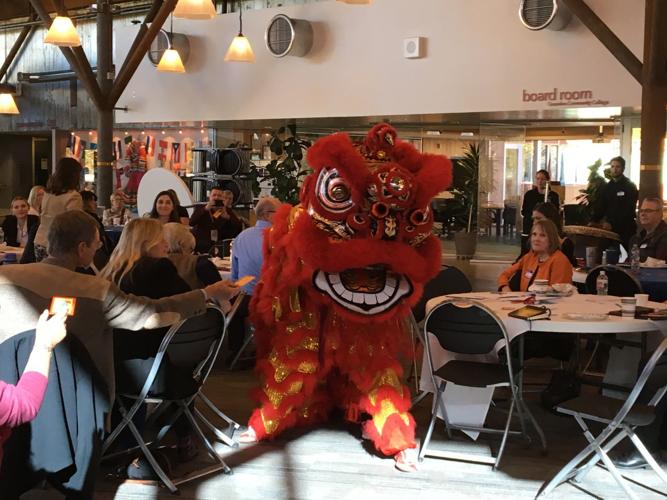 Members of Sacred Mountain Fighting and Healing Arts perform a traditional Chinese lion dance to dispel negative energy and darkness following a meeting of the Stronger as One Coalition Friday. 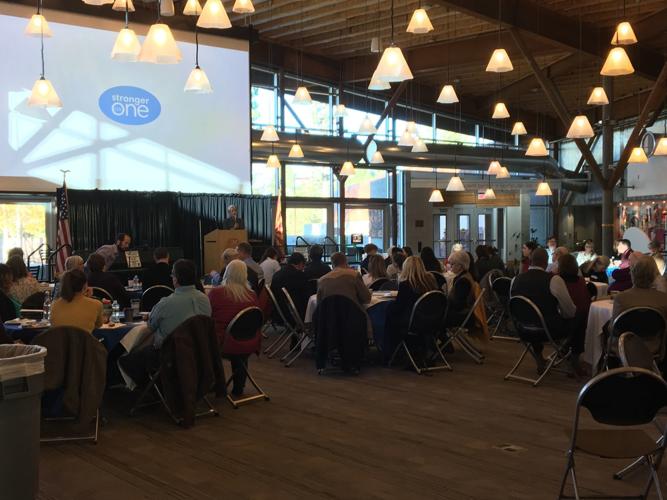 About 50 people, representing organizations throughout northern Arizona, gathered Friday morning at Coconino Community College for a meeting of the Stronger as One Coalition, which strives to improve mental health awareness and resources.

The Stronger as One Coalition, a collaboration of local groups to increase mental health resources and awareness in northern Arizona, is off to a promising start as it celebrated its first year this month.

Since its beginnings as a community discussion on mental wellbeing, the group has grown to encompass numerous local organizations, led by the City of Flagstaff and Chief of Police, Coconino County and Sheriff, Flagstaff Unified School District, Coconino Community College, Northern Arizona University, Northern Arizona Healthcare Foundation and the NARBHA Institute.

Using funding contributed by the NARBHA Institute, the county announced it is hiring two individuals to oversee these efforts going forward.

Final interviews for a two-year program manager will be completed this week. Deputy County Manager Marie Peoples said this role will likely include collecting data on the number of people trained so far as well as managing events and creating a website for the Coalition.

A one-year position for a leader of youth mental health initiatives will follow.

“A year ago there was a lot of community strength, but everybody was operating independently, trying to figure it out on their own,” Peoples said. “It’s just amazing how far we’ve come because now all those resources are poured together. This has not replaced individual efforts and community efforts. It’s really just bringing it all together to be a central hub.”

Mental Health First Aid, a free, eight-hour training program, is being used to increase knowledge about mental health emergencies like suicidal behaviors and panic attacks and how to respond to them. Stronger as One aims to train 50,000 people in five years across the five northern Arizona counties.

Among other organizations, Flagstaff Police Department and the Coconino County Sheriff’s Office have trained all their employees in Mental Health First Aid. Sheriff Jim Driscoll said the program is now a part of the academy training as well.

Although numbers on the total people trained are still unavailable, Peoples said the two new leaders will help to collate this data, possibly placing it on a map to show the areas where training may still be needed, whether by organizations or neighborhoods.

In response, We Care NAZ, a nonprofit striving to reduce suicidal behaviors in northern Arizona, has worked to install “Buddy Benches” throughout the community.

These placards list the contact information for the Suicide Lifeline and Crisis Text Line and can be installed on everything from park benches to walls. A total of 51 have been installed so far, with another 100 scheduled, using funds collected from the Live 2 Play FUNraiser last month.

“Even in our little community here, we feel [the impact of suicide],” said Clay McCauslin, founder of We Care NAZ. “We all know families who are dealing with it right now. And it happens all too often.”

These Buddy Benches have been placed at highly visited sites throughout the county and Flagstaff, such as the courthouse, Fort Tuthill and Sawmill County Park.

Organizations involved in the Coalition have spent the year reaching out to students for their input on mental well-being. Internally, schools have also made efforts to improve resources for their students.

Trainings have been abundant within FUSD, where nearly 300 employees who work with students in sixth through 12th grade completed a youth-specific mental health program and 120 Coconino High School students were trained in Sources of Strength, a suicide prevention program that equips student leaders to promote the strength and protection of their peers.

A Stronger as One club made of students from Flagstaff High School, Coconino High School and Northland Preparatory Academy has also been meeting monthly for ongoing discussions about youth mental health.

“Our youth have grown-up feelings,” said Page Arvizu, an NAU student who has worked with Coconino County on its youth mental health outreach. “We need to be able to have these engaging conversations with them so they don’t grow up and feel like they are not heard and they are not seen. These are the reasons why our kids are suffering.”

United Way of Northern Arizona will be prominent in these efforts as it restructures its own programs to focus solely on youth.

“We, in many ways, are following the lead of Stronger as One because what we know is that to be successful, we need to work collaboratively, in a collective way, throughout the community,” said Sylvia Johnson, chair of the United Way Northern Arizona board of directors.

As it begins its second year, a main goal for Stronger as One will be to expand its reach to other areas of Coconino County and northern Arizona with a sense of urgency, due to pressing factors like local suicide rates.

“Stronger as One is about changing the culture. … It’s about reaching out to our fellow community members with greater understanding, greater compassion and care,” NARBHA Community Adviser Kerry Blume said.

Stronger as One: Community leaders rally for suicide prevention and mental health wellness

Flagstaff community members have been moved to action because of the severity of one particular mental health crisis: suicide.

Northern Arizona community partners gathered for the first Live 2 Play FUNraiser September 19 and 20, an event that raised more than $55,000 f…

Letters From Hope: Support from a stranger

It was early in 2017 when Daren Manley found the letter, hidden among fliers for dog walking services and missing pets on the bulletin board a…

Flagstaff man turned his life around; now he helps others do the same

Northern Arizona Healthcare will be hosting a free Mental Health First Aid Course for the public Saturday, Feb. 15 from 8 a.m. to 5 p.m. at No…

The Coconino Coalition for Children and Youth (CCC&Y) in Flagstaff will hold its annual prevention conference Thursday, April 23 from 8 a.…

Though today marks the last day of Suicide Prevention Month, local prevention and awareness efforts are ongoing, especially as the COVID-19 pa…

Members of Sacred Mountain Fighting and Healing Arts perform a traditional Chinese lion dance to dispel negative energy and darkness following a meeting of the Stronger as One Coalition Friday.

About 50 people, representing organizations throughout northern Arizona, gathered Friday morning at Coconino Community College for a meeting of the Stronger as One Coalition, which strives to improve mental health awareness and resources.