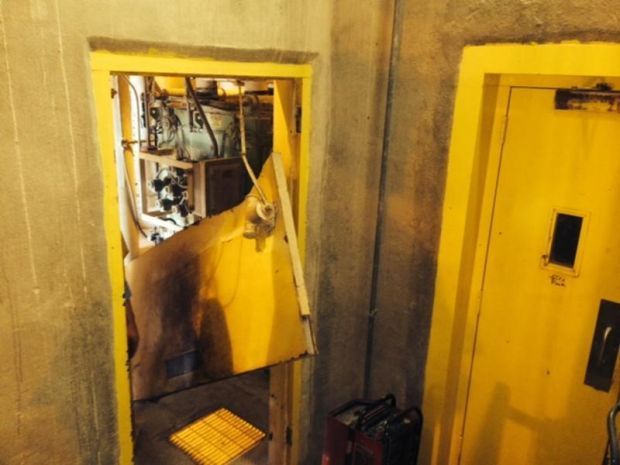 A door on the fifth floor of Nestle Purina's grain elevator was ripped off its hinges during a September explosion caused when welders ignited grain dust in the facility. (Photo courtesy of Arizona Division of Occupational Safety and Health) 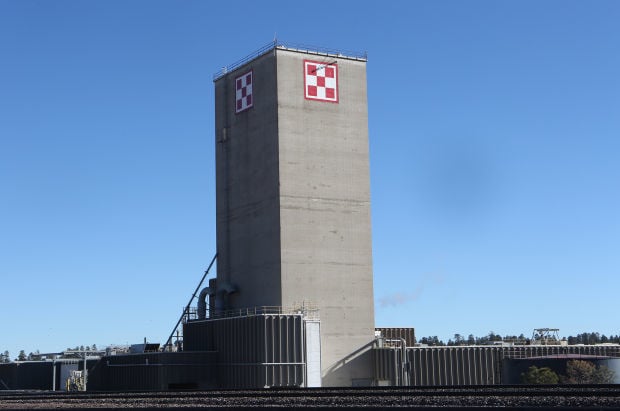 The north side of the Nestle Purina plant in Flagstaff.

A state investigation into a September explosion at the Nestle Purina PetCare plant found the company violated Arizona law in failing to sufficiently clean and prepare a grain elevator before allowing four contract welders to begin work in the potentially explosive environment.

The Arizona Division of Occupational Safety and Health conducted a one-month investigation of the pet food factory after the grain dust-fueled explosion sent the four workers to the hospital and damaged the 204-foot milling tower to the point that it was decommissioned for 42 days. The two workers closest to the explosion sustained third degree burns over 13 percent to 15 percent of their bodies, including their necks, faces, arms and upper bodies.

The two other welders on the job sustained minor burns. All of the men are now back at work and “doing fine,” Nestle Purina spokesperson Keith Schopp said.

After reviewing the state’s accident investigation, the Industrial Commission of Arizona issued a serious violation to Nestle Purina and fined the company $5,000. At a hearing on the case, Industrial Commissioner David Parker said the fine amount didn’t seem sufficient, though he acknowledged that it aligns with the agency’s penalty policy.

Sufficient or not, $5,000 is a drop in the bucket for the international company. Last year, Nestle Purina’s America division reported $8.2 billion in sales, according to an annual report from the company.

It was 4:18 p.m. on Sunday Sept. 14 when Andre Buschmann began welding the final edge of a 14-foot square metal patch on the fifth floor of Nestle Purina's grain elevator. Buschmann and three other employees of Arizona Equipment Fabrication had been hired to do patch work on the elevator and finish fire suppression cannons in the facility. The concrete tower houses six elevator bucket systems that transport grains like corn, barley, soy and rice, which emit a fine dust that can become combustible.

As Buschmann hammered the patch to close a gap in two metal pieces, he must have knocked loose some dust with his three-pound hammer, he said in an accident investigation interview. Seconds later, as Buschmann started to make the final weld, a shock wave followed by flames shot out at him.

The explosion blew him into and then over a nearby handrail and he fell a level down before his harness caught his fall. Buschmann hung midair, surrounded by darkness until he found a four foot pipe. Grabbing onto the pipe he unlatched his harness and slid down the pole to safety.

Nearby, Michael Day was acting as the firewatch for Buschmann when he saw a flash. As he dove toward the door to escape, he was surrounded by orange flames, Day said in accident reports. He eventually found his way through the darkness to the rooftop and then made it down to the ground.

Buschmann and Day were burned most seriously by the blast.

After the electric arc on Bushmann’s welding tool ignited the grain dust, the flame swept down the grain elevator, consuming all of the airborne dust and oxygen in the enclosed concrete and steel area. As it descended, the explosion blew out doors and crumpled metal infrastructure. Investigators’ pictures taken after the explosion show doors twisted and ripped off their hinges and parts of the grain elevator blasted open.

Federal law requires that employers take certain precautions, including issuing a hot work permit, before allowing operations like riveting, welding and heating in their facilities.

Purina did have such a permit system in place, but the cleaning and vacuuming that was supposed to clear the milling tower of all combustible grain dust was inadequate, the state’s investigation included. The fact that the company’s maintenance manager signed off on the hot work permit anyways, allowing welding in the area, puts the company on the hook for the explosion, ADOSH investigators said. The investigators also gave an average rating to the company’s written safety and health program but rated its communication to employees as inadequate.

Since the explosion, the company has taken steps to strengthen its hot work permit system, Schopp said. He declined to give specifics though.

Schopp also said that all of Nestle Purina’s 250 employees continued to work full time during the mill tower’s shutdown.

With snow at higher elevations possible this week, Arizona Snowbowl to open Wednesday

After previously delaying opening day due to warm weather, officials with the Arizona Snowbowl Ski Resort announced they would be ready to go …

Twenty-five years ago, Al White was at the top of his game. China had a voracious appetite for cardboard and White had seen a big opportunity to build a business while doing good for his community, a theme that has been present throughout his life.

A door on the fifth floor of Nestle Purina's grain elevator was ripped off its hinges during a September explosion caused when welders ignited grain dust in the facility. (Photo courtesy of Arizona Division of Occupational Safety and Health)

The north side of the Nestle Purina plant in Flagstaff.