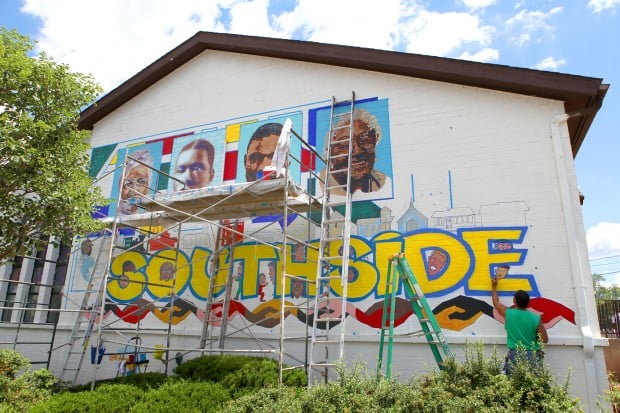 Ricardo Guthrie, an ethnic studies professor at Northern Arizona University, works on a mural on the side of the Murdoch Community Center on Tuesday afternoon. Guthrie has been working on the mural since the first week in June. The mural will feature five portraits of historic Southside leaders from the era of segregation. (Jake Bacon/Arizona Daily Sun) 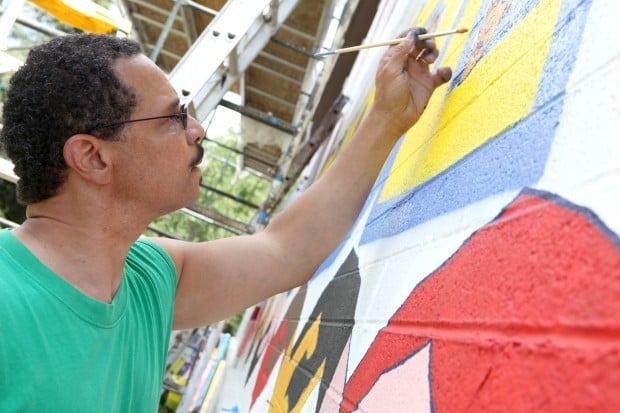 Ricardo Guthrie paints one of the detail faces on a mural celebrating the Southside on the wall of the Murdoch Center Tuesday. (Jake Bacon/Arizona Daily Sun)

Ricardo Guthrie, an ethnic studies professor at Northern Arizona University, works on a mural on the side of the Murdoch Community Center on Tuesday afternoon. Guthrie has been working on the mural since the first week in June. The mural will feature five portraits of historic Southside leaders from the era of segregation. (Jake Bacon/Arizona Daily Sun)

Ricardo Guthrie paints one of the detail faces on a mural celebrating the Southside on the wall of the Murdoch Center Tuesday. (Jake Bacon/Arizona Daily Sun)

With a few bold strokes of a paintbrush, cityscape and Southside converge.

Color has taken hold, and faces have begun to emerge.

They are faces that belong to people who have put their mark on Flagstaff and influenced its growth as a city. Their names aren't as known as some people involved in helping Flagstaff become what it has become, but they've had an impact just the same.

From Butler Avenue, motorists have been witnesses to a mural going up on the western wall of the Murdoch Community Center in the Southside neighborhood. So far, four of five faces have been painted. A fifth will be done for a September unveiling -- in time, it is hoped, for the First Friday ArtWalk.

Coral Evans, member of the Southside Community Association Board, said the board worked in partnership with NAU in conducting an assessment of the neighborhood. Out of that assessment came resident recommendations for a mural on the community center. After receiving grant funding from the city and Flagstaff Cultural Partners, the project was possible.

The lead artist and key painter of the mural is Ricardo Guthrie, an assistant professor of ethnic studies at NAU.

"In particular, they (Southside residents) said there were several community leaders who helped build Flagstaff who were pretty much unknown," Guthrie said. Several were involved in creating and running the Dunbar School, which is the current location of the community center.

Five were selected, Guthrie said. Four have been placed on the wall so far:

-- Tildy Anderson, one of the early instructors at the Dunbar School and later at South Beaver School.

-- Paul Laurence Dunbar, poet laureate for African Americans in the early 1900s. He is so well-known that several communities across the country named schools after him, including Flagstaff.

-- Wilson Riles, principal of Dunbar School. He helped desegregate it in 1953, a year before the Brown vs. Board of Education decision paving the way for integrated schools. Riles, a graduate of NAU, also became the superintendent of public instruction for the state of California.

-- Katherine Hickman, a longtime Flagstaff community activist. She is in her 90s and the only one still alive.

The fifth image will be of Joan Dorsey, the first African American stewardess for a major airline, also a Flagstaff resident.

Evans said watching the mural go up has been a thrilling experience.

"My family has been in Southside since the '20s," Evans said. "And we're very proud. You cannot drive past that mural and not have a sense of pride."

Hickman was a preschool teacher of hers, she added.

"I don't think that there's a young adult my age who she wasn't a preschool teacher for, and a role model and a mentor," she said. "The mural depicts the awesome diversity and sense of place Southside has. To see that history reflected on the wall of the Murdoch Center is just awesome."

Deb Harris, president of the Southside Community Association, said, "Every time I drive down Butler, I get so excited to see it."

To see the contributions made by African Americans to the growth of Flagstaff and to prompt questions from people passing by who see the mural are invaluable in building a sense of Southside community, Harris said.

"It takes a lot of people to build a community, and I think they should all be recognized for their contribution," she added.

Guthrie said he started painting in the beginning of June. He works mornings.

"I think we can finish it next month for sure," he said, adding that he would like to invite other artists to join the effort.

Among those who have been tireless in their help are Franklin Willis, who provided needed scaffolding; Corey Begay, NAU graphic arts student and muralist; and James Gallardo, whose grandmother is Hickman.

Plenty of volunteers from the community and NAU have also put in countless hours of help.

Artists and residents interested in lending a hand can call the Murdoch Center at 226-7566, or e-mail outreach@southsidecommunity.us, or just stop by the center.

I saw it. What a shame. It looks like graffiti. How sad for our town.

Glory - I read the comment. What a shame. It looks like closemindedness. How sad for our town.

Thank you to Professor Guthrie - a fine addition to the Southside and the Butler corridor. Long live public art!

Graffiti? It looks like a bunch of professional portraits. That's the best mural in a town of many murals.

I saw it and I love it. What a great way to celebrate our special residence. How sad for you that you are unable to appreciate the work and the message. And PS. "It looks like graffiti" is a compliment. Graffiti art has risen in the ranks of the art world and is now respected globally. Bravo to the city and the southside. My sympathies to glory.

[quote]glory said: "I saw it. What a shame. It looks like graffiti. How sad for our town."[/quote]

What a shame your attitude is such. I think the contributions of these individuals is long overdue for some recognition and what a great way through such a fun and worked on mural. The histories attached to each of these people are so fascinating. I get to see it everyday on my way home from work and it's great! Keep it up Southside!

I saw "Glory's" post. What a shame. It looks like ignorance. How sad for that person's village.

... Amen! Bring some character back to our little mountain town. I would like to see more. Strong work.

This mural is one of the finest examples of urban art I have ever seen. The southside community can be very proud to have such a beautiful and colorful centerpiece in their neighborhood!...

What an ideal addition to our culture here in Flagstaff!

[quote]HerbRoscoe said: "What an ideal addition to our culture here in Flagstaff!"[/quote]

I wonder what the other local graffiti artists will add to this mural. Maybe they will just admire it and not add anything.

Why are African Americans the only ones being featured on this mural? The Murdoch Community Center has a core of multiculturalism (according to their website). Surely there were others who made great contributions. Hispanics, Asian Americans, Native Americans or (god forbid) Caucasians?

Just because I think this mural is such an incredibly positive thing, I can't let the baseless negativity expressed go unchallenged. The Murdoch Center has a very specific connection to the history of the African American community in Flagstaff and to the history of segregation. Today, yes, the Southside is indeed a diverse place, but I think it is fully appropriate to celebrate the people who made the Dunbar school an important part of Flagstaff's heritage.
Read up on the history of Flagstaff

Most of the murals in town are clever, well-suited to their spaces, and interesting. This just looks like a political poster - not nearly as cleverly artistic as the HOPE poster done by Shepard Fairey for Pres. Obama.To call it "urban art" is to not understand either art or urbanity. It isn't even good grafitti. Who paid for it?

This so-called mural brings no pride to the NAU art department. NAU could have brought in some of their better artists to collaborate on the design of such a highly visible project near the campus. Surely they could do better than this??

How much was spent?

Judy, your comments might carry more weight if you changed your avatar.

I drive past this mural a few times a week and Love, Love, LOVE IT. It has been quite a treat to watch it evolve. I think it adds a lot to the already artistic Southside.

@Banders1, I totally agree. I live in the neighborhood and stopped by today to take a look. I LOVE it. @JustMy2Cents, the multicolored chain of hands at the bottom of the mural signifies the multiculturalism you mention, as well as the unity of purpose needed to make Flagstaff the place that it is.

Wow, I love that others love this art. I don't personally. But how great that it makes others smile when they drive by. This in itself makes me smile.

banders1 how terrible to be judged so strongly for giving my opinion. I think that is a little closer to "closemindedness". But thanks for the history in the next comment knowing more about it makes it a bit more understandable and therefore likable for me. Lighten up, and smile when you see the art and know that it makes others smile too.

What a tribute to a beautiful woman... "Mother Hickman" is an amazing woman. I am so happy to see her homored in this way. Our town is a better place because of her selflessness for many decades. Congratulations, Mother Hickman!

I'd also like to add - the portraits look fine, not my style, but the artist is obviously skilled. I am sure the people pictured deserve to be honored, though I also agree that a multicultural mural would have been more appropriate, and how about all locals? Its the label and type that is the real problem and is in such bad taste.