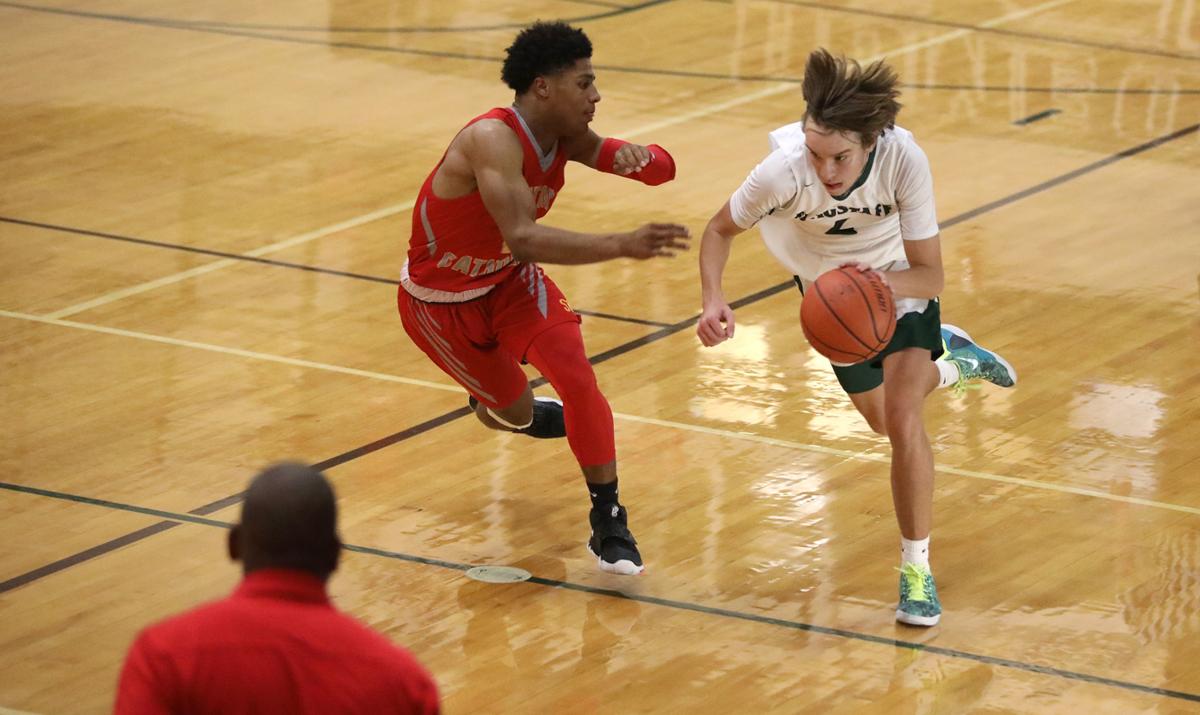 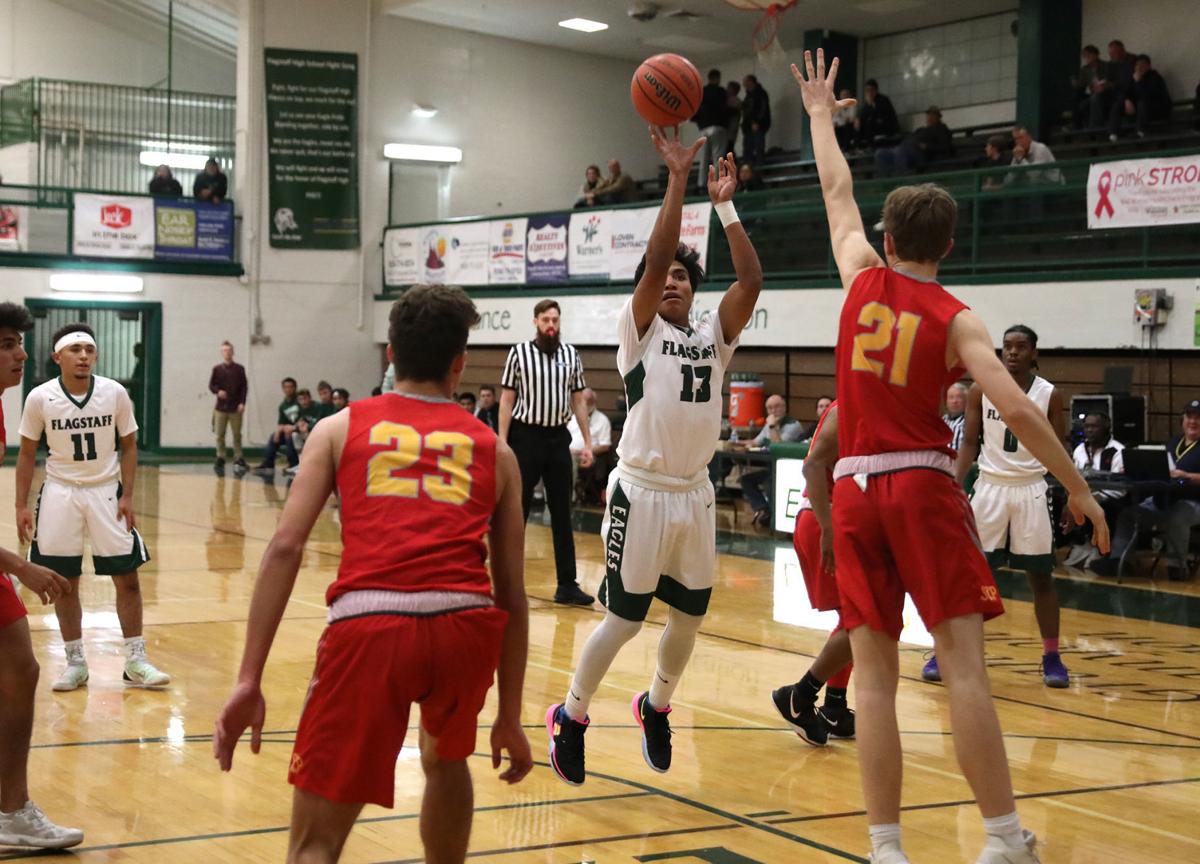 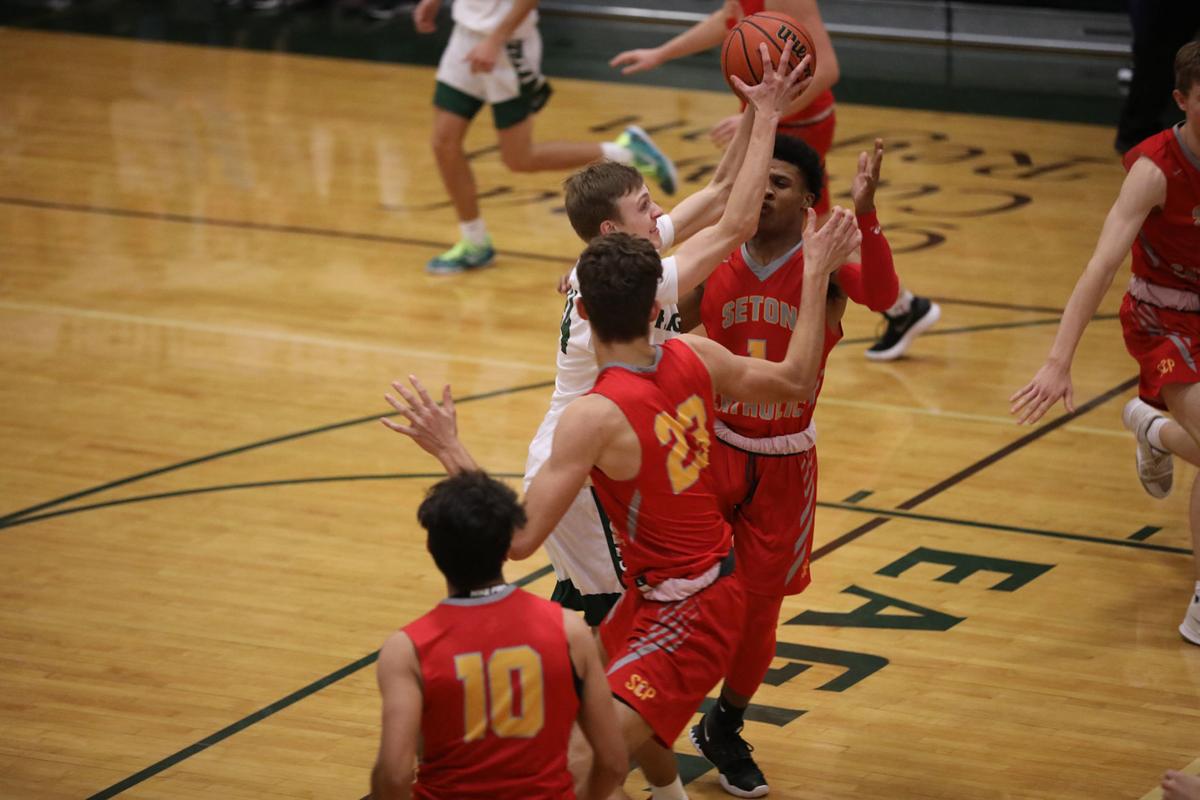 After a first half of missing on good looks, the Flagstaff Eagles boys basketball team started seeing the shots fall on the way to a second straight victory and a successful home opener over a program with a reputation.

Sneezy had a game-high 24 points, Nick Morrow added 10 and the 4A Conference Eagles held off the 4A Seton Catholic Sentinels in the War Memorial Gymnasium on Friday night for a 59-55 win, keeping the visitors winless in the process.

"We just couldn't knock it down, so for the second half we all came together and said, 'You know what, we need to make our shots now going into the third quarter,'" said Sneezy, a sophomore.

Sneezy finished the night with four 3-pointers made. His final trey of the evening gave Flagstaff (2-1) its fourth and last lead of the game at 56-55 with 43 seconds left to play. After a Sentinel player missed a layup under the steel, Flagstaff's Brandon Foster went to the foul line and hit both of his shots for the three-point advantage.

Eagles head coach Nick Walton echoed what Sneezy had to say about holding on for the win: it makes the Eagles a better team moving forward.

Those were Foster's only two points of the night, but they were clutch with less than 30 seconds remaining. With Seton Catholic (0-3) coming out of a timeout for a try at a tie, Foster and Xavier Sanchez, both coming off the bench for Friday's game, trapped the Sentinels' leading scorer near the right corner with 11.3 to play and Sanchez drew a foul in the process and went to the line for the final score.

Seton went on a 10-0 outburst in the third quarter over nearly two minutes before Walter Downs broke it up with a trip to the free-throw stripe for a couple of points that had Flagstaff ahead 53-49. The Sentinels kept up the pressure and took a lead with one minute to play.

But Christian Lancaster found Sneezy in the corner for the go-ahead shot. It was the second big-time dish that Lancaster had for Sneezy, who also drained a 3 in the third quarter on a pass from his teammate that capped a Flagstaff 14-2 run. Not long after his 3, Sneezy drove to the hoop and made it 44-34.

Flagstaff led by as much as 11 after the third-quarter burst.

"It demonstrates the potential that our team has," said Walton, whose team lost to the Sentinels 68-32 in last year's regular-season meeting. "Seton Catholic is a fantastic program, so let's be honest, they got kids who can play. So to face adversity, battle through it and take control of the game, execute at the end, I think we are just getting started."

Morrow, a force on the glass all night for the Eagles, sparked the third-quarter run for his team with a bucket inside that led to an and-1 play that he couldn't complete. The sophomore's effort gave Flagstaff its third lead of the third quarter.

Josh Lenners, who finished with eight points, hit a 3 out of the halftime gates for the Eagles, giving his team a 26-24 lead and giving the crowd a reason to roar.

"The message at halftime was to keep shooting the ball. They will fall," Walton said.

All night Flagstaff's defense was doing well, whether in zone, press or man coverage. The defensive effort led to Flagstaff's highest-scoring output of the season so far.

Flagstaff trailed by six a few times in the opening quarter, the largest deficit the team allowed in the game.

"We've really tried to take a defensive emphasis this year and let the offense come flow out of it. I was happy to see that work tonight," Walton.

He added: "Team win, everyone contributed across the board."

Sneezy said he thought it was a testament to the team's growing chemistry.

The Eagles will look to keep clicking when they take on Prescott for an away game on Tuesday that opens Flagstaff's Grand Canyon Region play. Tipoff is set for 7 p.m.