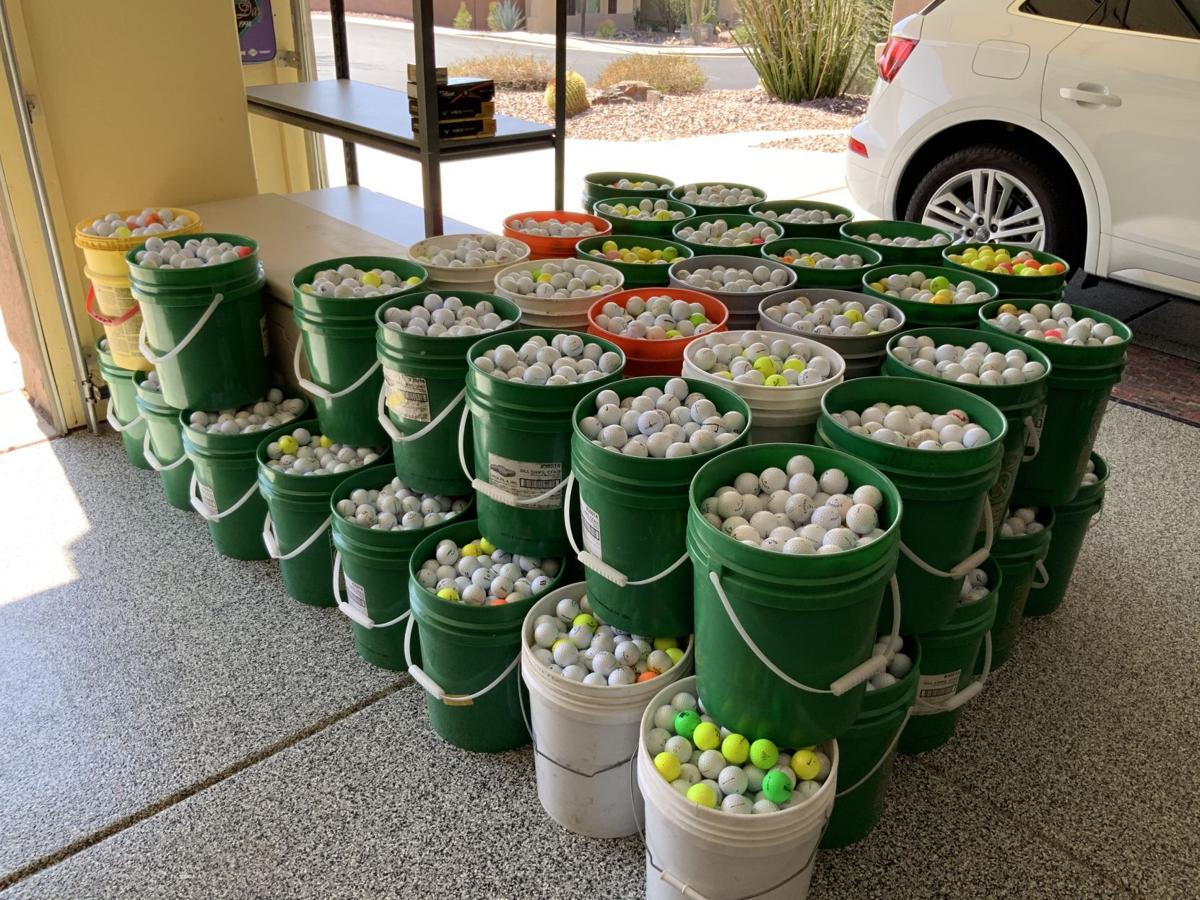 This photo shows 23,800 found golf balls in Brian Billideau's garage that are waiting to be turned in for funds that will go toward Smiles 4 Sick Children, Billideau's charitable organization. 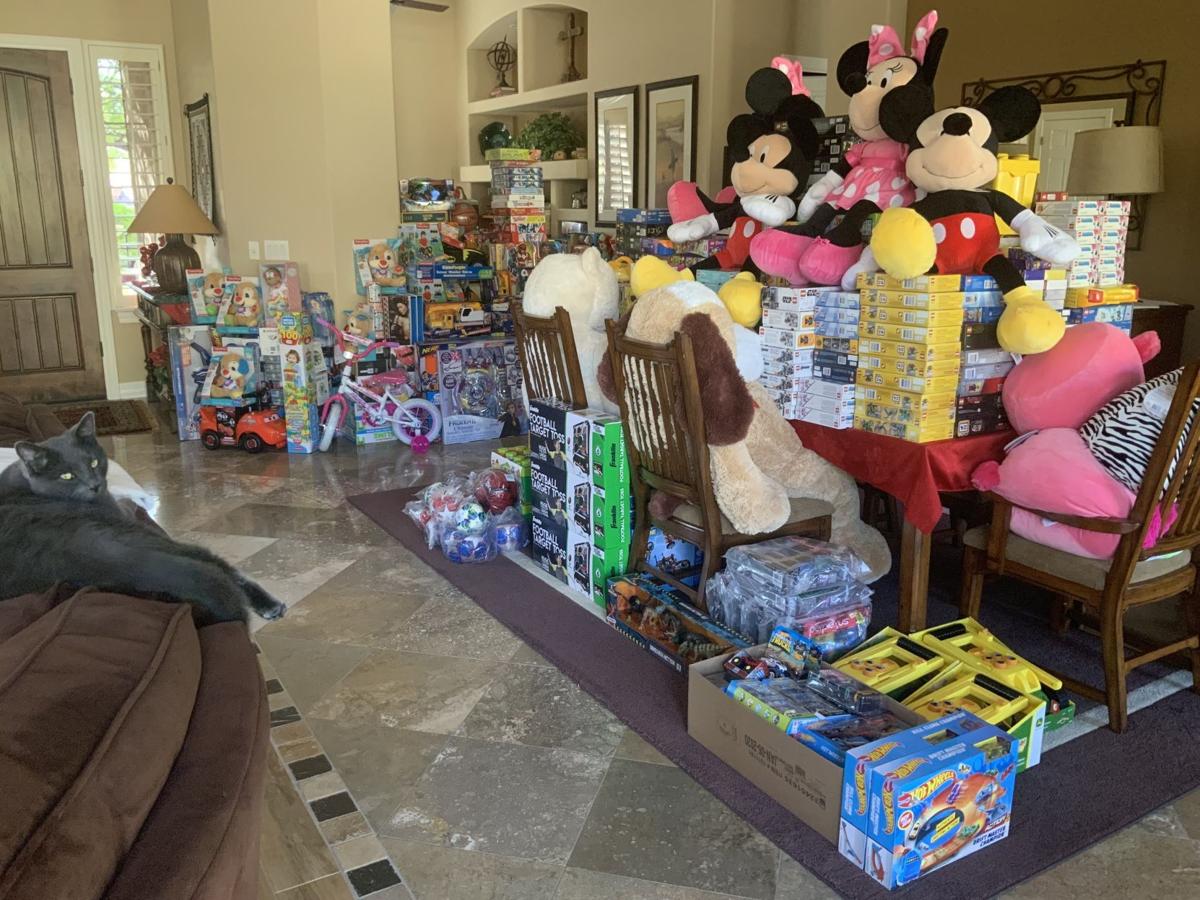 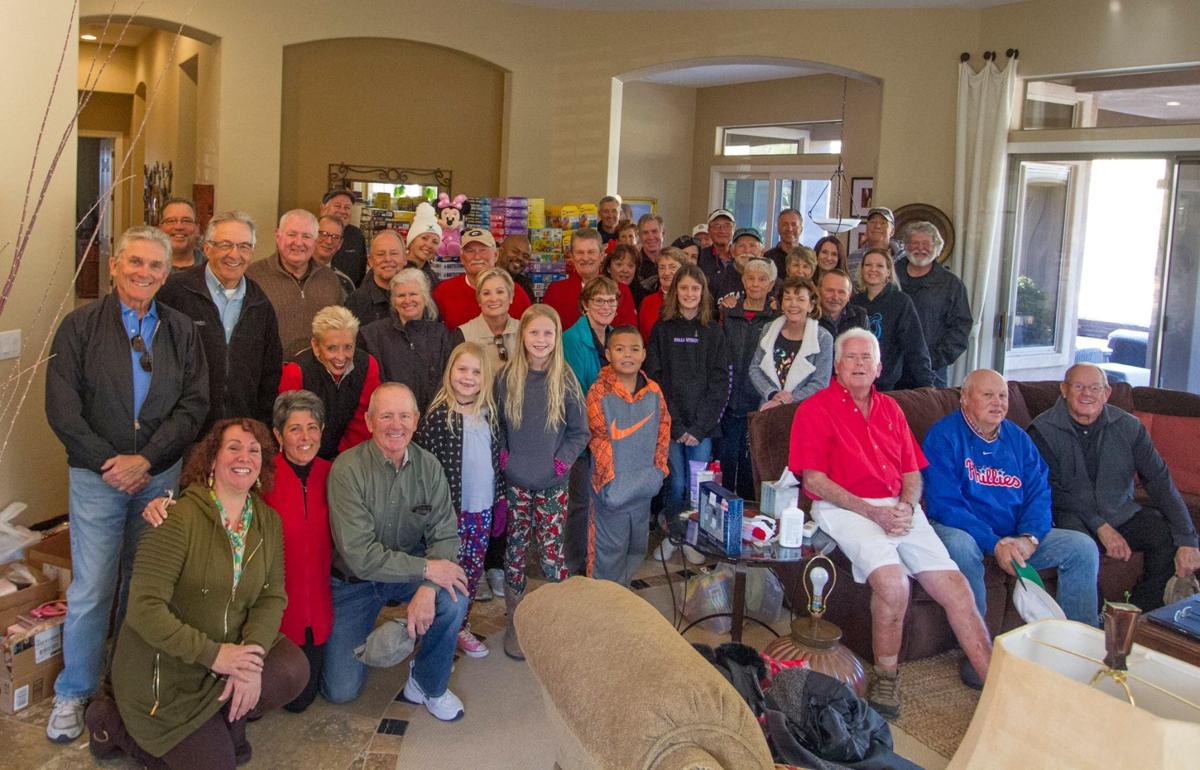 This photo shows some of Brian Billideau's friends and neighbors in Anthem, who come help every year to our “Loading and Delivery” event. According to Billideau, who started Smiles 4 Sick Children in 2013, he typically has in excess of three thousand new toys and gifts for the kids in Phoenix Children’s Hospital and deliver the Saturday before Christmas.

In golf, a bad shot doesn't always have to result in a bad score.

Brian Billideau likes to think of the game of life in the same way, so he found a way to turn a mulligan into a miracle when he started Smiles 4 Sick Children.

He started the charitable organization that provides gifts and other forms of charity to sick children and their families in 2013. In its first year, Smiles 4 Sick Children saw 245 toys donated.

The toys find their way down to Phoenix Children's Hospital each year, as Billideau and volunteers ship the donations to the location on the Saturday before Christmas each year.

“In the last six years, we have taken 15,000 toys down to the hospital," said Billideau, who last year helped to donate 3,300 toys through his organization.

In 2017, Smiles 4 Sick Children hit a record mark of 4,165 toys donated. Billideau, with the help of his wife, has watched it grow and branch out over the years.

“A new toy is not going to cure a child, but it is going to help their mental attitude," Billideau said. "A little 8-year-old boy who sees a bicycle sitting in the corner, he’s thinking he can’t wait to get home to ride that bike.”

Billideau understands more than some just how mentally tough it can be in hospitals. He lives with degenerative rheumatoid arthritis, and expects to be going through another surgery soon -- his 33rd, to be exact.

“It’s no big deal. I mean, some people have it so much worse than I do, and I am lucky," Billideau said.

Despite his illness, Billideau has been an ardent golfer throughout most of his life, even playing for the Army golf team after being drafted to serve in Vietnam. He only recently put down the bag of clubs. During those years playing the links, and going on walks with his dogs, he amassed vast quantities of used golf balls that mostly sat in the corner of his garage.

One day, while looking at those thousands of golf balls, it dawned on him to put those balls to good use, thinking that many golfers must also have lots of balls just sitting around collecting dust. So Smiles 4 Sick Children started, and Billideau now gets used golf balls donated from friends and others in addition to several courses in Arizona.

According to most golf analysis groups, some 300 million golf balls are lost or discarded a year in the United States. Moreover, there are currently nearly 300 golf courses in Arizona.

The courses he works with allow Billideau to put out a Smiles 4 Sick Children collection bucket in which golfers can place used and found balls. Billideau takes the balls to a company that will send them to be refurbished, and that money for the balls goes toward the charity. He says that people who donate golf balls will often hand him a check as a donation as well.

“Every course, every year, I get more and more and more," said Billideau, who spends his winters living in Anthem and stays in Flagstaff for the summers.

Around this time every year, Billideau will get the money from found ball donations and other forms of donations, purchase toys that the children's hospital recommends will work best for the kids, and then he and volunteers will begin the "Loading and Delivery" event. Along with the volunteers, he takes the toys to PCH the Saturday before Christmas, giving time for the workers there to place them in PCH's Toyland.

Billideau said around 125 volunteers help him with the yearly task of taking the toys to PCH, adding that they try to get young people involved in the effort as much as possible.

“And we want them to see the power of giving back, what philanthropy is all about," Billideau said.

Billideau, now retired after years of owning Northland Publishing and Canyon Lands Publications, decided he wanted to give back after finding a way to make the best out of a bad scenario. In 1992, Billideau struck and killed with his vehicle a young girl in Flagstaff who entered a busy intersection.

"From the moment I hit her until a bystander lifted me off of her as she lay in the street, only a minute or two … the bond that developed between her and myself I now know will last the rest of my life," reads part of Billideau's story on the Smiles 4 Sick Children website.

“I say that every time a kid at Phoenix Children’s Hospital smiles, a little kid in heaven smiles," Billideau said.

And Billideau realizes that smiles are important throughout the year, so he has added ways to donate and help through his charity. For instance, sometimes Smiles 4 Sick Children will donate toiletries for family members and those who might have to spend time at the hospital with their child. Smiles 4 Sick Children has also donated lots of small knitted beanies for premature babies, and red wagons that hold IVs on brackets to FMC.

“So yeah, it’s grown over the years,” Billideau said.

Amazon appears to have votes to block union effort

Amazon appears to have votes to block union effort

Gifts for grandparents: Adopt a Grandparent program in its fifth year in Flagstaff

As if by holiday magic, for the fifth year in a row, a Christmas tree has appeared inside the Route 66 Walgreens, listing the names, ages and …

Northern Arizona Healthcare, the organization that operates Flagstaff Medical Center, will be splitting from its 5-year-old Foundation in earl…

This photo shows 23,800 found golf balls in Brian Billideau's garage that are waiting to be turned in for funds that will go toward Smiles 4 Sick Children, Billideau's charitable organization.

This photo shows some of Brian Billideau's friends and neighbors in Anthem, who come help every year to our “Loading and Delivery” event. According to Billideau, who started Smiles 4 Sick Children in 2013, he typically has in excess of three thousand new toys and gifts for the kids in Phoenix Children’s Hospital and deliver the Saturday before Christmas.