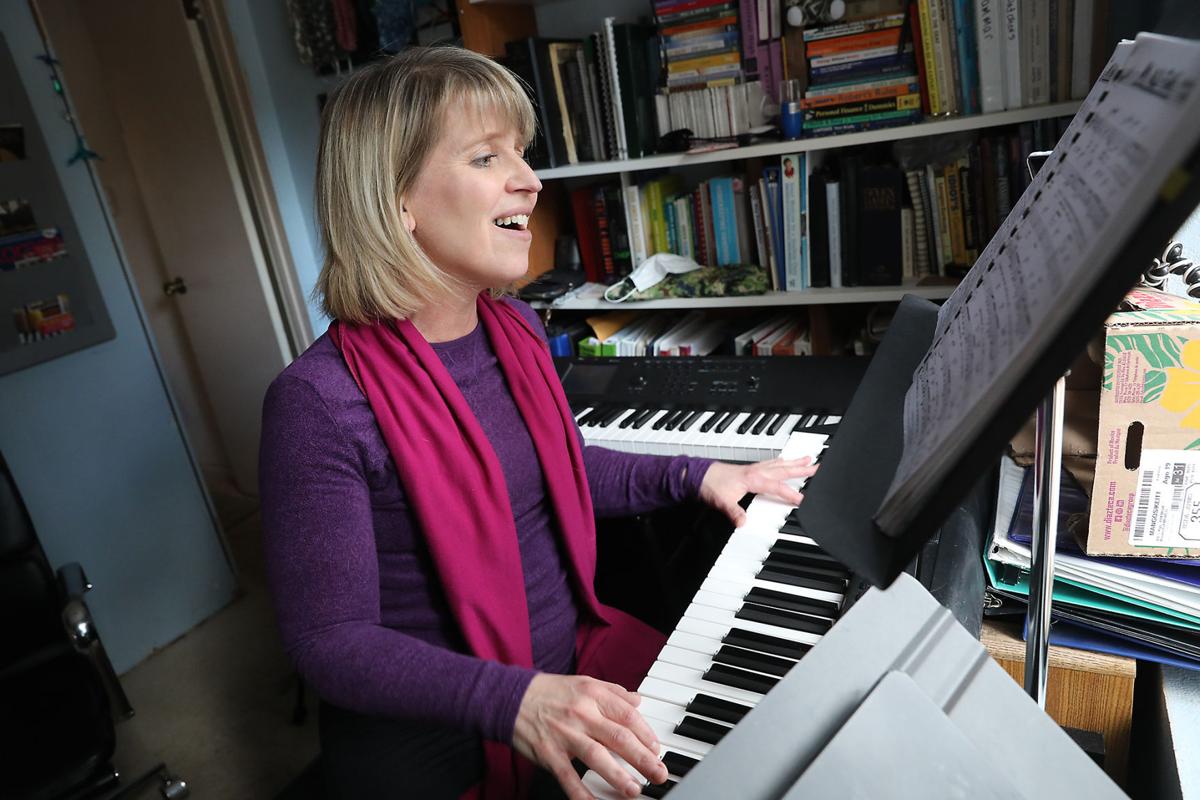 Stephanie Galloway sings in her home studio as she practices a piece Friday. The Flagstaff High School music teacher has recorded a song and shared it online every day since April 1, 2020. 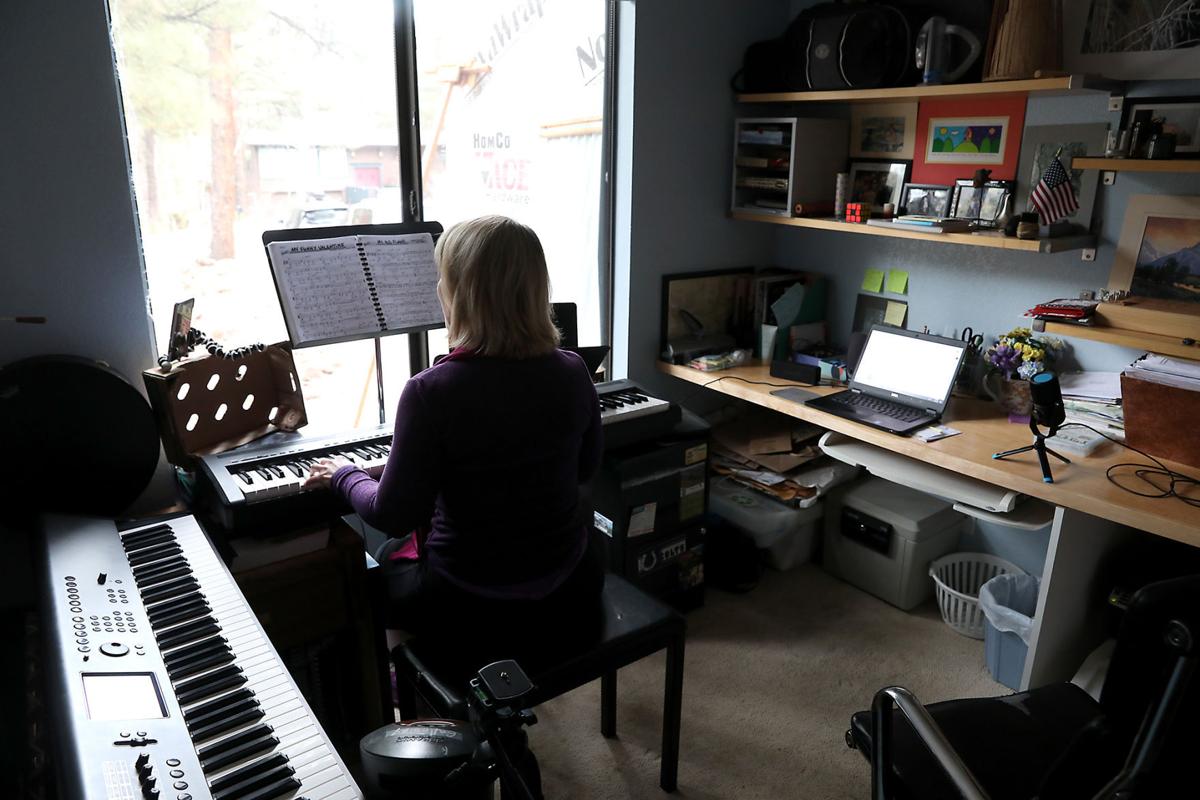 Stephanie Galloway sings in her home studio as she practices a piece Friday.

Stephanie Galloway teaches choir, but she does not consider herself a singer as much as a pianist. For nearly a year, though, the Flagstaff High School performing arts teacher has become a digital soloist, sharing new, self-recorded performances of a unique song every day.

“I had lots of friends doing similar things because we were all staying in our houses, so I did the first one and people responded and then I just kept doing them,” Galloway explained.

She got the idea in March 2020, when FHS teachers were asked to record a 30-second video of themselves for the school’s Instagram page, shortly after school was closed to prevent the spread of COVID-19.

“I could not believe how nervous I was about the whole thing. It took me so many takes. The whole thing, it was ridiculous,” she recalled. “I was super critical and I said to myself that day, ‘You have to get over that right now because you have to teach online now.’ The world was changing.”

So Galloway dug through her extensive music collection and on April 1 shared her first of her now 321 video performances to her Facebook page. Although she initially planned to continue the performances until school reopened, she later changed her goal to continue the activity for a full year.

Quick practice runs of the songs, as well as her recorded takes (limited to five or fewer) have given her brief periods of respite from her computer screen, so she has aptly named these performances “Song Breaks.”

The effort was not intended to be as public as it was personal, to give Galloway a reason to sing and play every day during the pandemic — activities she says are as essential as exercising or getting enough sleep.

“I’m a big believer in building habits. When you build a habit, say you’re going to do this, then make yourself accountable by putting it out there. That was a really big deal to put it out there,” Galloway said, noting the hesitation she had when friends asked her to make her videos public, so they could share with their own friends. “I had not been a public poster.”

The songs featured in her Song Breaks have spanned decades, genres and artists of all types, from 1960s to 2000s, gospel to country and Stevie Wonder to the Beatles. Galloway has curated set lists up to several weeks in length and has selected pieces to reflect holidays and notable events of the last year. She has even taken requests.

“I own so much music, plus you can find anything online. I just needed the words and the chords,” Galloway said, who has lived in Flagstaff since 1988 and has taught music at various local schools. She is also the organist at Trinity Heights United Methodist Church and the accompanist for the Master Chorale of Flagstaff. During her early years in Flagstaff, she was a pianist and music director at Black Bart's Steakhouse.

Throughout the process of preparing and recording her Song Breaks, Galloway has had her students in mind, even though she has not mentioned these pandemic performances to them, or to many of her colleagues. She has been waiting for the right time.

“I know I’m not the greatest singer in the world, but people are being supportive and I want to set an example for my students that you don’t have to be an American Idol type of singer to sing. We all can sing,” Galloway said. “I don’t expect everyone to record themselves. Me doing that is just me pushing myself.”

One of the concepts she teaches her students is “skill, drill, practice,” and she says there is nothing better to improve a musician’s skills than having an audience, even if that audience is virtual.

Playing around with different musical keys is beneficial, too, she says, and is like trying on different clothes, searching for the right fit.

“I never gave myself permission to do that before. I would always sing it in the key it’s written, but it doesn’t really matter most of the time, as a soloist. I just haven’t thought of myself as a soloist before,” Galloway said.

Some days are easier than others to squeeze recording sessions in between the end of the school day and dinner, but Galloway said she hasn’t missed a day yet — and doesn’t plan to until she reaches the one-year mark. In the summer, when she briefly left town, she even prerecorded a week’s worth of songs to ensure she stuck to her goal of posting one song a day.

And though she aims to get her performances recorded and shared as quickly as possible, she has found that the process has been especially therapeutic when she unable to sing together with her students, the thing she misses most about in-person school.

“You’re focusing on something else, the fact that you’re breathing and putting air through your body,” Galloway said. “I think singing in itself is just such a good thing for people that I think we often forget that we should do it every day, and sing all types of different songs. It’s neat to do something for a year, especially something that reflects what’s going on.”

For the first time in a years-long tradition, Coconino County’s top spellers are free from the anxiety-inducing judges, crowd, stage and micro…

Stephanie Galloway sings in her home studio as she practices a piece Friday. The Flagstaff High School music teacher has recorded a song and shared it online every day since April 1, 2020.

Stephanie Galloway sings in her home studio as she practices a piece Friday.