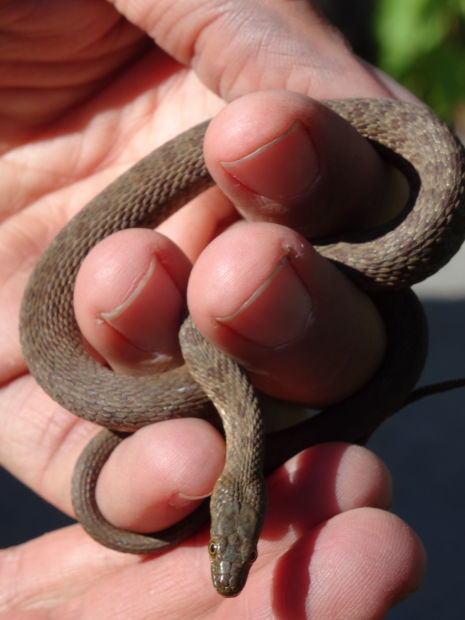 A Northern Arizona University researcher holds a narrow-headed gartersnake recovered from Oak Creek in May. The Center for Biological Diversity has announced it plans to sue the U.S. Forest Service over its management of livestock grazing permits that the nonprofit says threaten the narrow-headed gartersnake and the northern Mexican gartersnake, both of which are listed as threatened under the Endangered Species Act.  (Photo courtesy of Noelle Fletcher) 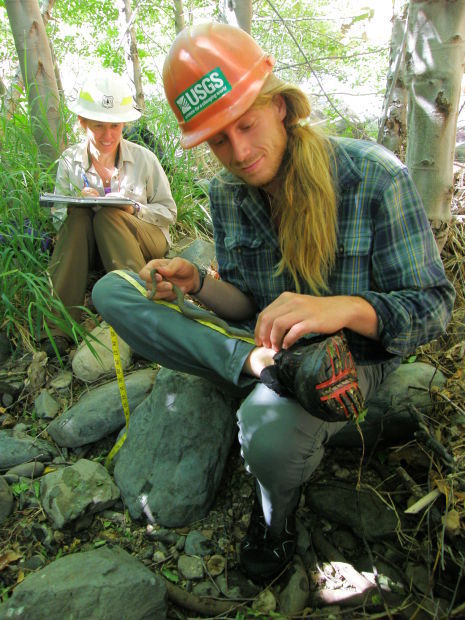 NAU student Jackson Bain analyzes an adult male narrow-headed gartersnake found at Halfway picnic area in Oak Creek Canyon during a research survey and salvage effort led by NAU associate research professor Erika Nowak in June. Nowak is worried that the flooding following the Slide Fire will have detrimental impacts to the canyon's narrow-headed gartersnakes, which are listed as threatened under the Endangered Species Act.

After the flames, will species survive?

The soaring canyon walls and crystal clear streams of Oak Creek Canyon may be the main draw for millions of visitors to the area each year. But the area is a gem for more than just the scenery.

The canyon is home to a unique array of threatened, rare or ecologically sensitive plants and animals. So when the Slide Fire ripped through 21,000 acres in and above the canyon this summer, biologists, botanists and nature-lovers weren’t sure what survivors they would find in its wake.

In the months following the fire, scientists have only just begun to study and explore exactly how the fire affected these precious plants and animals. For some, the outlook is hopeful but for others the situation looks bleaker.

The small, grey and brown narrow-headed gartersnake is one of the species scientists are worried will be wiped out by the debris and silt flooding into Oak Creek from the burn scar. The snake makes its home in clear, rocky streams in New Mexico and Arizona and was listed as threatened under the Endangered Species Act in July. Up until the Slide Fire, Oak Creek Canyon had the largest and densest population of narrow-headed gartersnakes. Now, scientists aren’t sure.

Erika Nowak, an associate research professor in biology at Northern Arizona University, has been monitoring and surveying the snakes since 1999. Her research helped contribute to the U.S. Fish and Wildlife Service’s decision to list the species this summer.

The snake populations have been declining as a result of invasive predators and warmer streamwater created in part by the proliferation of in-stream diversions, Nowak said. On top of that, the species has ben pummeled by the effects of wildfire across its habitat.

“Unfortunately the species’ range is corresponding exactly to where these huge fires, and the corresponding flooding, are happening,” Nowak said. The post-wildfire ash and debris that flow into the water change the oxygen levels and clog the gills of aquatic insects and animals, suffocating them. The silt also covers the rocks where fish lay their eggs and where snakes hide to hunt their prey. Because narrow-headed gartersnakes are exclusive fisheaters, if their prey begins to disappear, they won’t survive much longer.

In the area burned by the Whitewater Baldy Fire in New Mexico, for example, Nowak and other researchers have seen narrow-headed gartersnake populations nosedive. Last year, the struggling population in that area went extinct, Nowak said.

Her fear is that the same fate awaits the snakes in Oak Creek Canyon.

The prospect of losing another local population of the threatened snakes spurred a collaborative effort between Nowak, the U.S. Forest Service, the Fish and Wildlife Service and the Arizona Department of Game and Fish to bring 11 snakes from Oak Creek into captivity with the aim of helping restore the local species if they don’t rebound naturally after the fire.

“That's really exciting compared to what's happening in other places because we actually have a plan for saving them,” Nowak said. “This is the first time we've been able to capitalize on our previous knowledge and do that.”

The long-term plan is to create an enclosure at NAU that will mimic snakes’ natural habitat and encourage them to breed so the babies could be released back into the wild.

If the effects of wildfire-related silt and debris weren’t enough, the researchers have also conducted tests that detected E. coli in the snakes’ mouths. Levels of the bacteria skyrocketed during rainstorms this summer as ash and debris were swept into the creek. Though not exactly sure what impacts the E. coli might have on snakes, Nowak worries that it could be another factor causing population declines. If the snakes’ immune systems are already compromised, the introduction of E. coli bacteria could potentially trigger a widespread intestinal bacteria infection, Nowak said.

Birds of the canyon

Thanks to Nowak’s research, the Slide Fire’s effects on narrow-headed gartersnakes will likely continue to be thoroughly documented. There is much less information on how the Slide Fire affected Mexican spotted owls, another species listed as threatened under the Endangered Species Act. There are multiple Mexican spotted owl “protected activity centers” in the Oak Creek Canyon area. But the Forest Service wasn’t actively monitoring them before the fire, so it will be hard to know whether there actually were any animals in the forest during the fire, and whether they were affected, said Julia Camp, zone wildlife biologist with the Coconino National Forest. The owls commonly nest in the canyon walls, which would have protected them from the fire, but if one was nesting in a tree its home or even its babies could have been destroyed, Camp said.

The Forest Service Burn Area Emergency Response, a program to address the potential ecosystem damage after a wildfire, did include actions to preserve Mexican spotted owl and narrow-headed gartersnake habitat. The plan called for treating and protecting soil from accelerated erosion, including seeding and mulching hillslopes, which will help conserve the owl’s habitat and protect water quality for the snakes.

Camp also mentioned the northern goshawk as a species of interest in Southwest forests. The black and white bird of prey has been designated a sensitive species by the Forest Service and is an indicator of the health of the surrounding ecosystem, Camp said. Goshawk populations in the area are currently steady and they might even be benefiting right now because post-fire reseeding attracts small birds, the goshawks’ prey, she said.

Future of the flora

If the fate of animals near the Slide Fire burn area is unclear, the story on plants of interest in the canyon is as much of a mystery. There are five plant species within the Slide Fire boundaries that are listed as sensitive by the Forest Service’s regional office, but scientists have little information about how three of them fared through the fire.

Forest Service officials know the most about the Arizona bugbane, a broad leafed plant with a long flower stalk lined with petal-less white flowers. The species is limited to northern Arizona and is tucked into drainage bottoms and slopes along the West Fork drainage. Debra Crisp, a botanist with the Forest Service, has visited several documented locations of the bugbane and seen the plants sprouting and growing. The numbers of plants in most of those areas didn’t seem to have declined either, she wrote in an email.

Forest Service scientists don’t have information about how the fire affected three other species: Ertter’s rose, a pink-flowering plant that grows only in the West Fork drainage; the Alcove bog orchid; and Bebb’s willow, which produces delicate white flowers. They found one instance of a fifth sensitive species, a Flagstaff pennyroyal, that remained unburned.

As the forest starts to regrow and the effects of the Slide Fire ripple outward, scientists recognized the vast need to study the ecosystem, and the minuscule amount of funding available to do so. NAU graduate student Noelle Fletcher is working on one way around that dilemma with a citizen science project to monitor the threatened narrow-headed gartersnakes as well as the northern Mexican gartersnake, which is also threatened. She has worked on a project to develop a website and smartphone app allowing recreators and conservationists to record sightings of both snakes that will help researchers bolster their data on these animals.

“The idea is that citizen science can be really effective in telling us information about these species in order to provide really good solid conservation plan for them,” Fletcher said.

John Hinckley to be released from oversight

John Hinckley to be released from oversight

Watch Now: Phone apps that help you during natural disasters

Watch Now: Phone apps that help you during natural disasters

One man is in custody after a stolen FedEx van barreled through the northeast entrance of the Flagstaff Mall on Monday, bending traffic bollar…

COVID-19 cases in Coconino County are continuing to rise, according to the county dashboard data report. The county is still at a high transmi…

Bearing down to business: Flagstaff woman develops new canister to keep paws away from food on the trail

The product tester, a tawny grizzly bear named Cypress weighing on the far side of 500 pounds, went at the Grubcan tooth and claw, with gusto,…

4FRI group looks at next steps in wake of canceled contract

Just over a week after the U.S. Forest Service surprised many with the cancellation of the second phase of one of the country’s largest forest…

Board of supervisors moves RV Park in Parks forward, despite citizen appeal

A Northern Arizona University researcher holds a narrow-headed gartersnake recovered from Oak Creek in May. The Center for Biological Diversity has announced it plans to sue the U.S. Forest Service over its management of livestock grazing permits that the nonprofit says threaten the narrow-headed gartersnake and the northern Mexican gartersnake, both of which are listed as threatened under the Endangered Species Act.  (Photo courtesy of Noelle Fletcher)

NAU student Jackson Bain analyzes an adult male narrow-headed gartersnake found at Halfway picnic area in Oak Creek Canyon during a research survey and salvage effort led by NAU associate research professor Erika Nowak in June. Nowak is worried that the flooding following the Slide Fire will have detrimental impacts to the canyon's narrow-headed gartersnakes, which are listed as threatened under the Endangered Species Act.