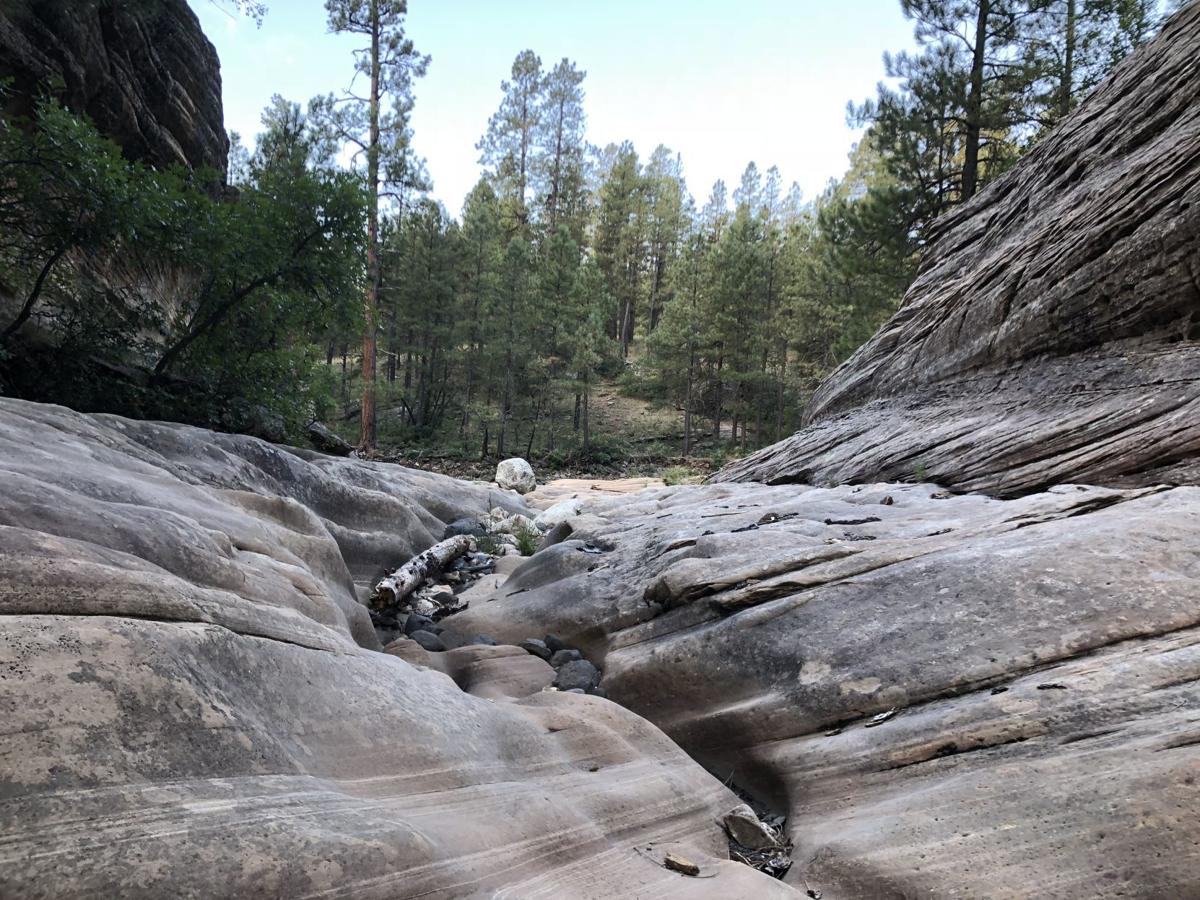 The rocky confluence of Kelly Canyon and Pumphouse Wash at the turn-around point of the Kelly Pocket Trail is a result of several geologic epochs. 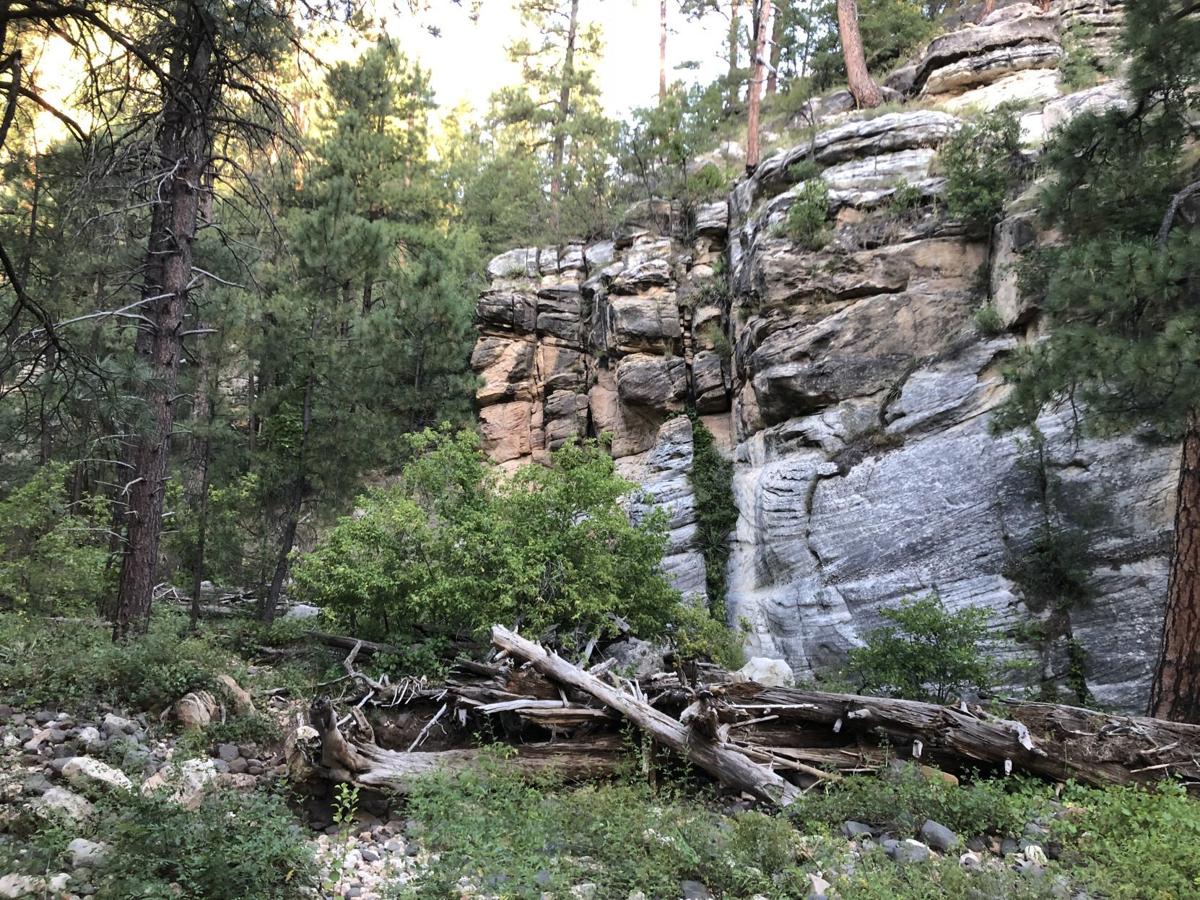 The canyon walls along the Kelly Pocket Trail jut out amid a pine and riparian habitat. 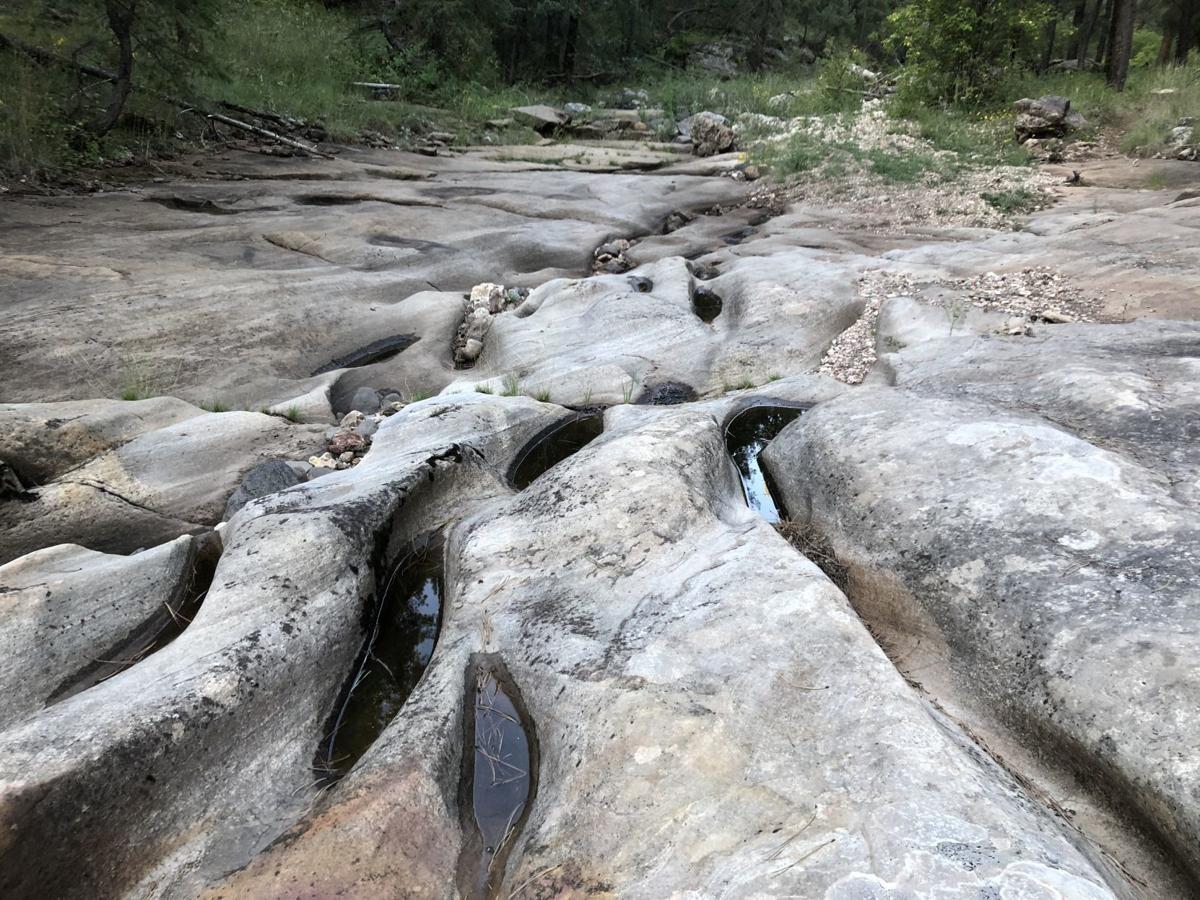 After summer rains and during spring snow runoff, the slot channels along the Kelly Pocket Trail fill with water. 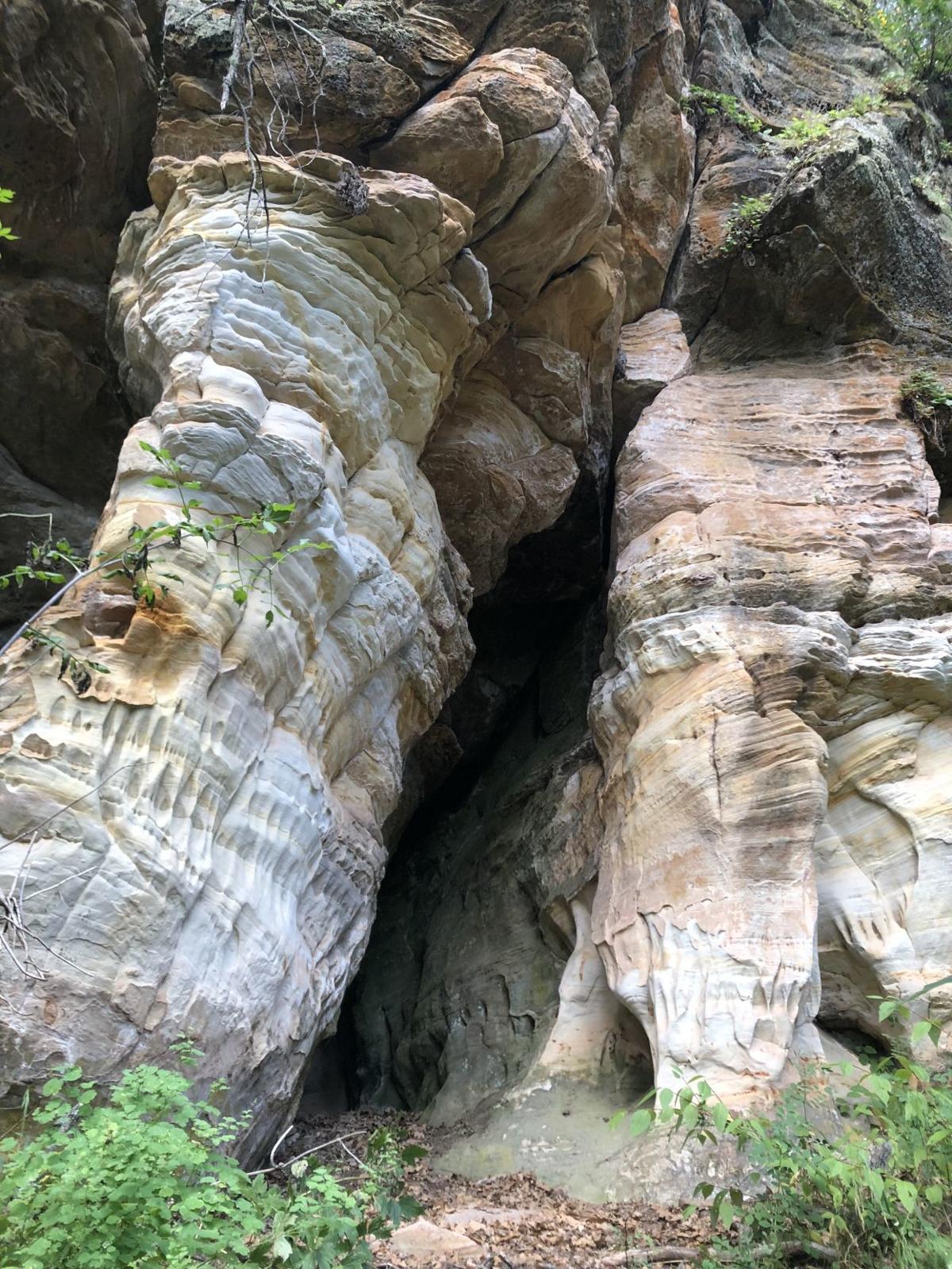 Several caves dot the Kelly Pocket Trail, such as this one halfway up the canyon walls. 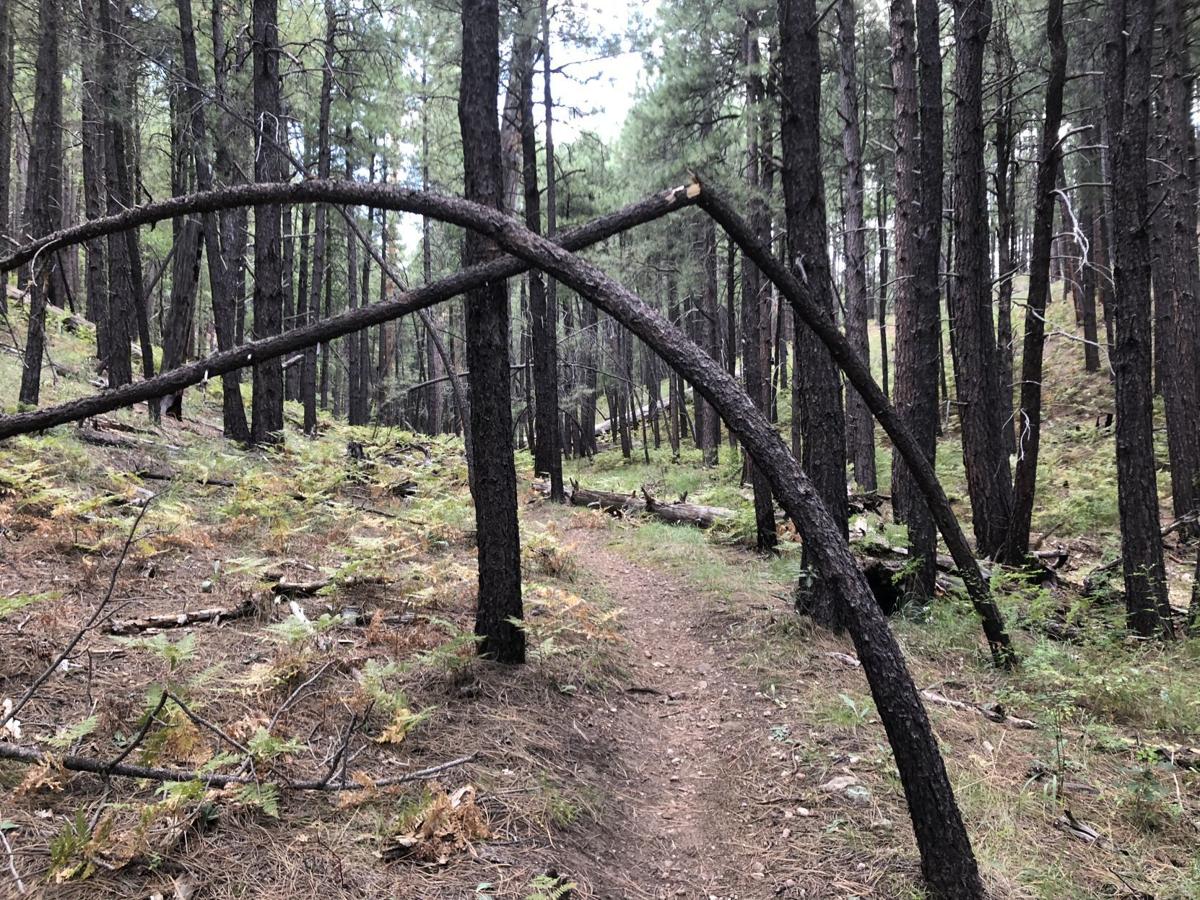 Bowed trees serve as canopies on several spots of the Kelly Pocket Trail.

Not every memorable trail can be found on a map. In fact, at the risk of getting all philosophical, it can be argued that the most fulfilling paths (alert: metaphor for life upcoming!) are the ones hidden away without obvious starting points, sans signage and bereft of directional arrows.

So it is with a 6.3-mile out-and-back trek of Kelly Pocket, which begins somewhere south and slightly west of Kachina Village and proceeds down an unmarked pine-laden singletrack until it bottoms out at the geologic Disneyland that is the confluence of Kelly Canyon and Pumphouse Wash.

You don’t have to be a science nerd to appreciate the wondrous rock formations, varied in shape, form and hue. Calling upon my distant general-ed-required science course, I deduced that this canyon must have formed epochs ago with a convergence of ubiquitous Coconino sandstone, gray limestone and red shale — please email me, profs, if I’m woefully off base — to make a fetching ochre-and-sienna palette along steep canyon walls and fossilized sand dunes slick even in late summer with slot channels.

The problem — and isn’t there always some obstacle, real or figurative, in our way? — is finding Kelly Pocket.

My go-to guide, "Flagstaff Trails Map by Emmett Barks Cartography," does not show a Kelly Pocket Trail. Kelly Canyon farther south off of Interstate 17, yes. But not the “pocket,” a descent down a side canyon that is said to be frequented by mountain bikers, trail runners who don’t mind rock-hopping and climbers seeking new “problems.”

A Google search yielded several mentions but no definitive directions on where the blasted trail began. Fortunately, David Blanchard, on his website devoted to Sedona and Flagstaff trails (www.dblanchard.net/TrailRuns), came through.

“It starts just to the south of the intersection of FR237 and FR 9498 (Kelly Canyon Road),” he writes. Blanchard provides a hand-drawn map showing the intersection where you are supposed to park off of the bladder-shaking Forest Service Road 237. Then he concludes with a description of the path: “It follows the canyon floor as it cuts through many sandstone layers and passes through a lush ponderosa pine forest.”

Granted, it was a tad scant on details, but I was game.

Little did I know that it would take three trips to this forest in “Baja Kachina Village,” plus some additional tutorials from both Blanchard and Northern Arizona Trail Runners Association honcho Neil Weintraub, before I could be steered in the right direction.

• First Attempt: The fact I got lost in Kachina Village was an ominous harbinger. Taking the Kachina Village Boulevard exit off I-17, I continued straight and then turned left of Kachina Trail. What I needed to do was make an immediate left before the Shell gas station onto a sorry excuse for a road that had no signage whatsoever. Also, not much asphalt. After a series of crater-sized potholes, the road veers right and then left and you get the premonition (still no signs) that you are on FR 237.

I looked for the junction with FR 9498. I found it 0.7 of a mile along, pulled off on a dubious shoulder. I wandered up and down the roadside, south, but could find no trail. Then it hit me: Maybe FR 9498 is the trail. Two rocky and miserable miles later, having followed the road south and east and hearing the interstate close by at some parts, I emerged … back on FR 237, farther down but still nowhere near the elusive Kelly Pocket.

• Second Attempt: Back in Flagstaff, I emailed Blanchard and Weintraub, seeking enlightenment.

Weintraub: “Good old Kelly Pocket. You are not the first to get turned around. The problem with many of Flagstaff's great trail systems is that forest users have created a multitude of unofficial or 'social' trails. This is exactly the problem you are encountering.” Weintraub advised parking “in the clearing by where the single track starts dropping into the canyon.”

Great, but which clearing (there are several) and which singletrack (I saw none)?

Then I heard back from Blanchard: “I mountain biked Kelly Pocket earlier this year and noted that the faint trail 'just to the south of the intersection' has become more difficult to find. There is another access point just to the west of the intersection and it appears this is getting more use these days.”

He attached a screenshot of the alternate access point. When I clicked on it, my first mistake was obvious. I had parked at the first of two intersections of FR 237 and FR 9498 — the wrong one. I needed to drive another two-tenths of a mile to the second 237/9498 intersection. With Blanchard’s new map in hand, I trotted along 237 looking for a singletrack opening. None was evident. A half-mile down, I hit an actual by-gawd trail sign. I happily turned left and ran. A couple of miles later, after some rather boring doubletrack (an old jeep road) I emerged … back on 237.

• Third Attempt: This time, I parked in the same place but sought out the “original” singletrack opening. I found it 0.1 of a mile east on FR 9498 and immediately plunged down a steep rock garden. But it was a path. And it was going the right way.

But after a rocky 0.4 of a mile, with only a few pines to provide shade, I hated Kelly Pocket.

Then, it flattened out, and the rocks subsided, and I entered an enchanting curvy path with bowed tree limbs like canopies over the trail and logs to hop over. Sure, there were rock gardens that slowed me down, but the trail also had easily runnable sections that crossed the dry creek and canyon bed several times and, at the 2-mile mark, rose above the canyon to give you a different perspective on the sandstone walls and fossilized dunes. Those dunes, by the way, are slick even when dry. Be extra careful after a rain.

It was fascinating how landscape features melded into one another. Pine trees giving way to ferns and lichen-covered boulders and sandstone beds and terraces.

Reaching the boulder-dense confluence on Kelly Canyon and Pumphouse Wash, I lost the trail for a bit. But, at this point, I didn't care. (FYI: Look left for an artfully arranged cairn that denotes the resumption of the trail.) I found where the trail picks up and followed Pumphouse Wash until I hit a wide rocky road.

Yup, you guessed it, FR 237. The sign said "Fay Canyon." It is an option to go right (north) on 237 to loop back. But I had experienced enough of 237, thank you very much. I turned around and retraced my steps.

Directions: From Flagstaff, take I-17 South to the Kachina Boulevard exit. Turn right off the freeway and make an immediate left (before the Shell Station) onto an unmarked road (which turns into FR 237). Follow FR 237 for 0.9 of a mile to the second junction of FR 237 and FR 9498. Park at a turnout.

The Route: Go 0.1 of a mile on FR 9498. Turn right onto an unmarked singletrack path (there's a pile of rocks on the right). Follow the singletrack for 3.1 miles to the confluence of Kelly Canyon and Pumphouse Wash. Either turn around and retrace your steps or make a right onto FR 237 and loop back to where you parked.

Soulstice aid stations: A runner's oasis in the woods

In the murky slough of predawn, when shadows can take on ominous shapes, out of the woods surrounding Schultz Pass emerges a figure that simpl…

The rocky confluence of Kelly Canyon and Pumphouse Wash at the turn-around point of the Kelly Pocket Trail is a result of several geologic epochs.

The canyon walls along the Kelly Pocket Trail jut out amid a pine and riparian habitat.

After summer rains and during spring snow runoff, the slot channels along the Kelly Pocket Trail fill with water.

Several caves dot the Kelly Pocket Trail, such as this one halfway up the canyon walls.

Bowed trees serve as canopies on several spots of the Kelly Pocket Trail.