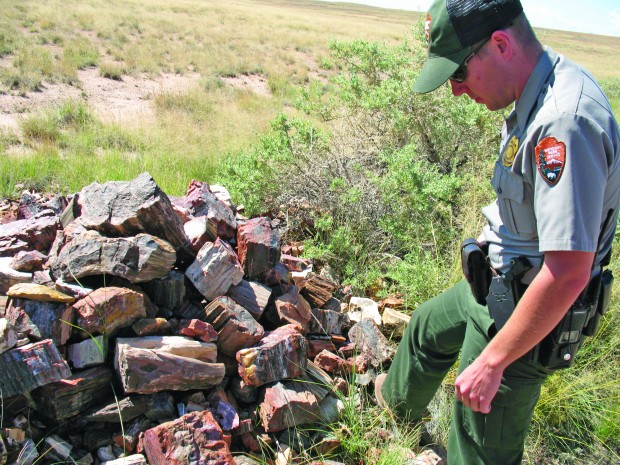 Nick Poulos, law enforcement ranger at Petrified Forest National Park, stands at a pile of "conscience rocks." The samples of petrified wood are often returned by visitors who took them. (Lisa Strobel-Hendricks/Special to the Sun) 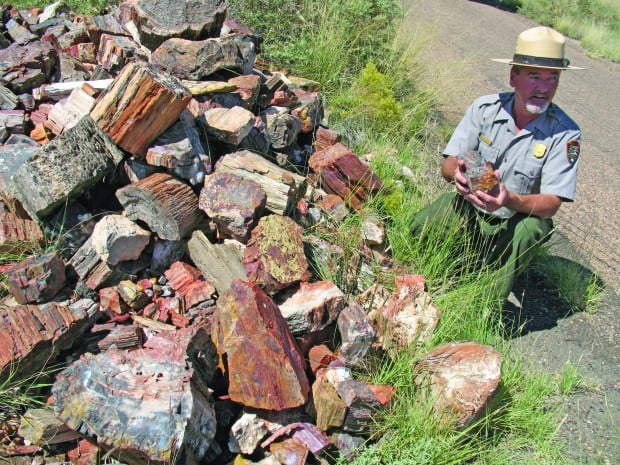 Kip Woolford, a ranger at Petrified Forest National Park, kneels next to a pile of "conscience rocks" at the park. The pieces of petrified wood have been confiscated or returned by visitors. (Lisa Strobel-Hendricks/Special to the Sun) 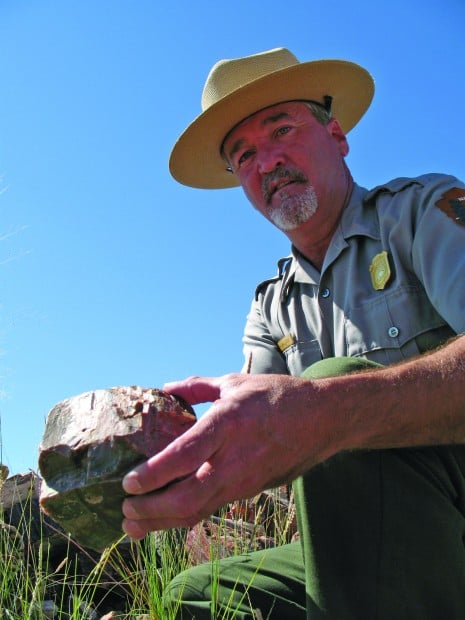 Kip Woolford, a ranger at Petrified Forest National Park, holds a "conscience rock" that was returned to the park. (Lisa Strobel-Hendricks/Special to the Sun)

HOLBROOK -- Under a cloudless southwestern sky, Kip Woolford drives his vehicle down a bumpy road out of sight of visitors to Petrified Forest National Park. Woolford, who is a ranger at the park, steps from his vehicle and stands at the base of a pile of rocks.

The rocks once had been wood, part of a large forest that existed 200 million years ago. Time and sediment had slowly turned the wood to stone quartz, preserving tree rings and bark so the modern world could marvel at the beauty.

"Some of this stuff, it had to take two people to carry," he says, pointing to a large section of a tree trunk that had been turned to stone.

The rocks, some pieces as big as a briefcase, others as small as a silver dollar, make a pile weighing tons. It's not the only pile in the park. The piles contain "conscience" rocks.

Some of the rocks were mailed back by people citing curses. Some were seized during inspections. Some park visitors were caught in the act of stealing. Some of the stone was tossed out of car doors and windows before the visitors who took them reached the inspection station at the entrance of the park.

"Once it's removed from the original place, the damage is done," Woolford says, throwing a piece back on the pile. "There's no way to put it back where it originally came from."

The stones have been taken "out of their context," Woolford says. They no longer have scientific value and are placed on the piles.

ONE TON A MONTH

The National Park Service estimates that about a ton of petrified wood a month is stolen from the 220,000-acre park's 600,000 annual visitors. The estimate is based on the amount of rocks mailed back, picked up along the side of the road near the exits and seized. There is no way to know for sure how much is taken. The park has more petrified wood than anywhere else in the world.

Matthew Smith, museum technician at the park, says that the museum's collection of letters sent with conscience rocks has about 1,200 pages written between the 1930s and now. Packages dropped off at the fee collection booths at the park sometimes come with letters, but not always. He gets three to six new letters a month.

The minimum fine for stealing petrified wood or pottery shards or any archaeological artifacts is $350. The price goes up the bigger the weight and quantity of the "specimens," says Nick Poulos, a park law enforcement ranger. The crime is a misdemeanor.

The typical response from visitors who are caught: "'It's just a small piece. I thought it was OK,'" Poulos says.

TALK OF A FAMILY CURSE

About two miles from the pile of conscience rocks at the southern entrance to the park, the Rainbow Forest Museum has a display of letters from people all over the world who have returned rocks that were stolen from the park.

The display is called "Mystery of the Conscience Wood." Sitting on a bench is a large piece of wood. Ranger Lauren Carter says a man came into the museum with it. He had said his father had stolen it 55 years ago. He had hidden the hefty piece of petrified wood in his truck under a stack of potatoes. There was talk of a family curse.

"It could be a manifestation of their guilt probably," Carter says, pointing to a three-ring binder underneath the display. The binder contains letters from all over the world from people who have returned pieces of petrified wood they or family members stole from the park. Many of the letters have a theme of bad luck.

A letter dated March 1986: "... Believe me, if I would have known the curse went with any of the rocks, I never would have taken these. My life has been totally destroyed since we've been back from vacation. Please take these so my life will get back to normal. Let me start over again. Forgive me for ever taking these."

An undated letter: "... When we were there, we read the letters of the many people who had returned wood to you with tales of bad luck, ruined marriages as well as other stories of misfortune. At first, we did not believe the ramblings of such obviously superstitious persons, but upon a review of the life and lack of luck that our family member had these past 30 years, we have begun to wonder if possibly the legend could have some truth to it."

'DEVIL MADE ME PICK IT UP'

Smith said the legend of the curse of the petrified wood likely began in the 1930s. Eventually, it became a part of the park's history.

An undated letter: "Found this in my room. You can have it back. It's bad luck. I got busted the other night."

Another undated letter: "When we were out west last summer, these rocks climbed into our car & now they want to go home."

Some letters talk of guilt.

A letter dated April 2, 1935, postmarked from India: "... you may smile at me and think me a bit foolish, but I have always been a law-abiding citizen and it has troubled me to have something in my possession that is not mine. So I am returning it to you ..."

Letter dated Oct. 21, 1998: "I picked up this petrified rock about 13 years ago when I visited the national park. I came across it today and decided I should send it back to you. I am sorry that I took it and wish for you to have it back. Thank you. P.S. It has been bad luck to me."

Undated letter: "Please return to the Crystal Forest. It sparkled and the devil made me pick it up. I can't live with it (guilt) anymore."

Sarah Herve, assistant chief of interpretation at the park, says that the park is a thriving site for archaeological, geological and paleontological research. Paleontologists study fossils left from the late Triassic period. Geologists come to the park for the Chinle formation. Archaeologists come to study the dwellings and daily life of the Pueblo Indian culture. Picking up rocks and other artifacts can affect the value of those rocks and artifacts to scientific study.

Back at the rock pile, Woolford stares at the stones, lost in thought. He notes the beauty of the stones -- how one can still see the bark, the rings of the trees preserved in time.

Poulos says that visitors may pick up the petrified wood to look at it. That's fine, as long as they put the rocks back where they found them.

A letter dated Oct. 27, 1995, postmarked from Nevada: "When I last visited your park, I took these rocks because I was so intrigued by them, despite your pleas to leave them in the park. Now that I wish to work in the field of geology, I realize that they belong in the park. If everyone who visited the park grabbed these rocks, there'd be no more left."

Poulos, who is out on patrol, listens to his radio as the dispatcher relays information about a woman who has taken a piece of petrified wood and has placed it in her purse. The dispatcher says another park visitor witnessed the theft. Poulos prepares to leave in his all-terrain vehicle.

OUT OF CONTEXT FOREVER

The current pile has been in use for the last seven years, Woolford says. There is another, larger pile up the road that was used many years before that. They rest under the sun, soaking up the heat of the day. No park visitors get to see them in their context anymore.

"Too bad," he says, turning away to get back into his vehicle. "Now no one can enjoy it."

Poulos says that when he speaks to the visitors, his message is the same.

"We ask they leave the wood so their kids can enjoy it," he says.

Nick Poulos, law enforcement ranger at Petrified Forest National Park, stands at a pile of "conscience rocks." The samples of petrified wood are often returned by visitors who took them. (Lisa Strobel-Hendricks/Special to the Sun)

Kip Woolford, a ranger at Petrified Forest National Park, kneels next to a pile of "conscience rocks" at the park. The pieces of petrified wood have been confiscated or returned by visitors. (Lisa Strobel-Hendricks/Special to the Sun)

Kip Woolford, a ranger at Petrified Forest National Park, holds a "conscience rock" that was returned to the park. (Lisa Strobel-Hendricks/Special to the Sun)