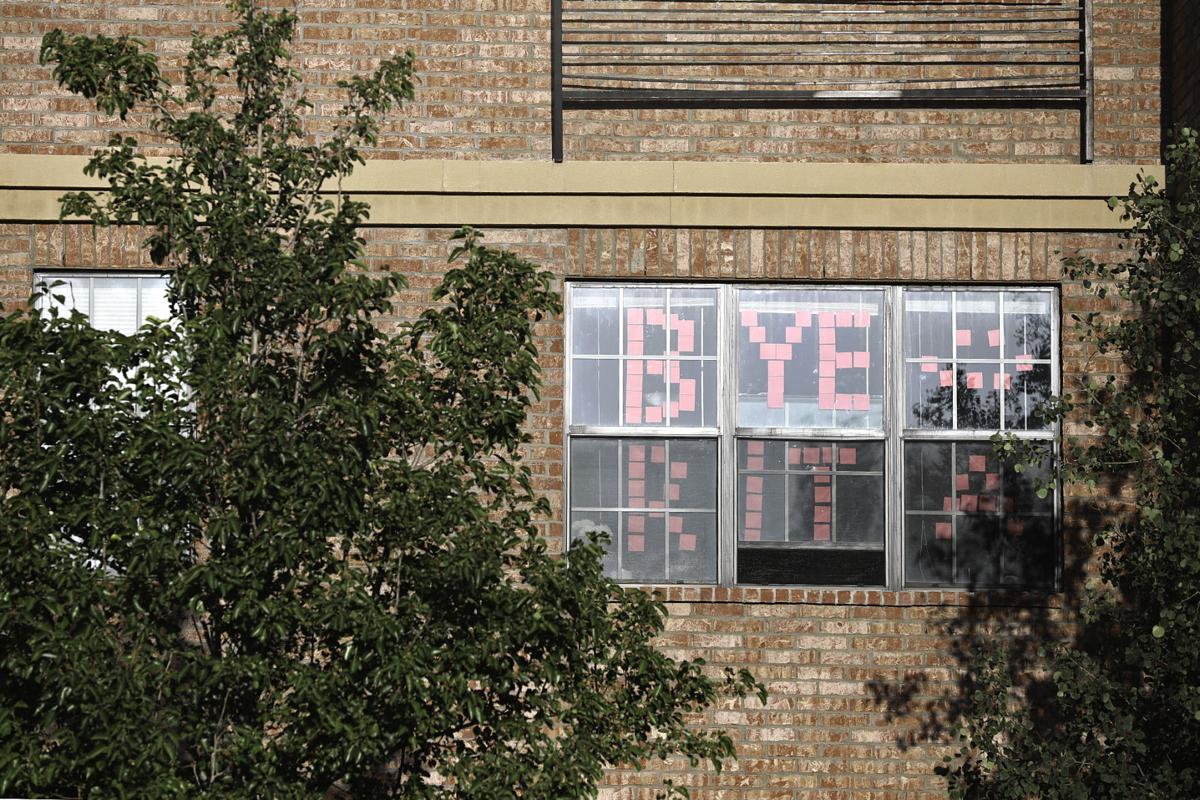 A window at The Grove, a student housing complex in Flagstaff, displays the words “Bye Rita” spelled out with sticky notes Tuesday evening. Rita Cheng, president of Northern Arizona University, announced Tuesday that she will not be seeking an extension to her contract. 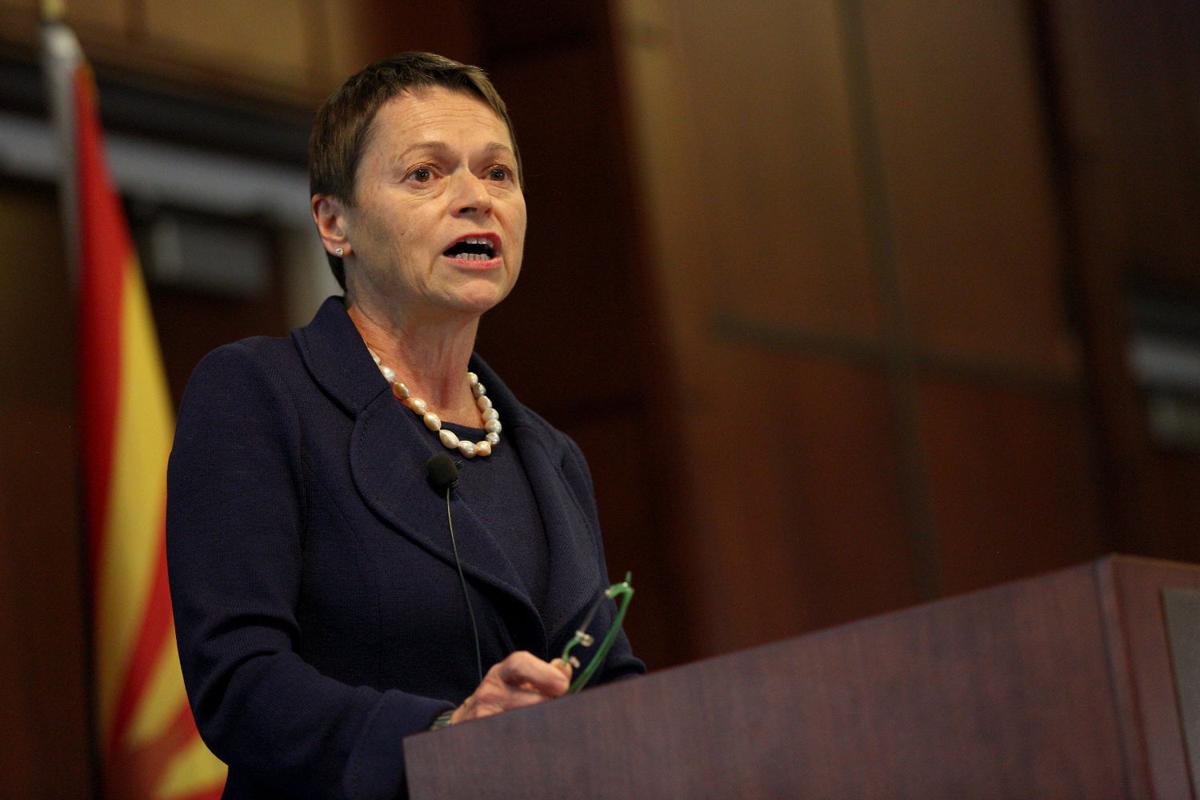 In this 2016 file photo, NAU President Rita Cheng delivers her State of the University speech at the High Country Conference Center. Cheng has announced she will not be seeking an extension of her contract, which expires in 2022.

Northern Arizona University will soon need a new president: after six years in the role, Rita Cheng announced Tuesday she will not be seeking an extension of her contract, which expires in 2022.

“The diverse students of NAU have driven me to continue to serve as president of this tremendous institution which has demonstrated great success. Although a difficult decision, after 40 years in higher education, I have decided that it is time to step away from this role,” Cheng said Tuesday in a news release from the Arizona Board of Regents (ABOR).

ABOR plans to begin a nationwide search for a replacement this fall. Cheng will continue to serve as president until her replacement is found.

Shortly after the ABOR announcement Tuesday, Cheng sent a letter to the campus community similarly revealing her upcoming departure, explaining that announcing her intention now will give the board enough time to find her replacement.

Her letter lists accomplishments made by the university in areas such as enrollment, graduation, research and finances during her time as president, but did not explain neither why she has chosen not to continue in the university’s leading role nor her plans for after leaving the position.

“Rest assured that I remain committed to our institution and to you — NAU's students, faculty and staff,” Cheng said in the letter. “The year ahead will have its challenges, but I look forward to meeting them together with you and to advancing NAU's academic and student-centered mission.”

The university did not respond to a request for further comment Tuesday.

Before beginning at NAU, Cheng served as the chancellor of Southern Illinois University in Carbondale. Previously, she spent 22 years in various teaching and administrative roles at the University of Wisconsin-Milwaukee. At the time, Northern Arizona had an operating budget of $460 million with about 26,000 students at campuses statewide and online. The school's fiscal year 2020 operating budget was $630 million, and the school now serves nearly 30,000 students.

On Tuesday, ABOR chair Larry Penley recognized Cheng for her contributions to NAU’s honors, allied health and music education programs, while Gov. Doug Ducey commended her work on initiatives including the Arizona Teachers Academy and the United States–Mexico–Canada Agreement (USMCA).

“Arizona is incredibly grateful to Dr. Rita Cheng for her dedicated years of service to our students and the @NAU community,” Ducey shared on Twitter. “For over six years, Dr. Cheng brought vision and a commitment to excellence to Northern Arizona University.”

Despite these praises, though, Cheng has faced controversy from students and Flagstaff community members for administrative actions during her time at NAU, including this year.

In January, a bipartisan group calling itself the “#RitaResign Coalition” created an open letter calling for Cheng’s resignation or the nonrenewal of her contract by ABOR. The coalition was formed following the public release of a state audit that identified $40,000 in university funds used for improperly documented travel Cheng completed last year. The open letter referenced rising tuition, budget issues and a lack of mental and social resources for students, among other grievances. Student supporters approached ABOR with these grievances during its meeting the following month.

In May, community members began to protest at Flagstaff City Hall, asking for administrators to implement pay cuts or furloughs instead of continuing to cut faculty and staff positions in anticipation of a predicted $100 million in lost enrollment revenues for the fall.

The protesting was repeated several times throughout the summer as faculty, staff, students and other community members objected to the reopening of campus in August during the ongoing COVID-19 pandemic.

Cheng said in her letter she intends to spend the rest of her term positioning NAU to meet the challenges of higher education, including COVID-19.

“Since my arrival in 2014, we have made tremendous strides in delivering on our mission and strategic goals, growing and evolving in a time of change for higher education and providing our students with an exceptional educational experience in Flagstaff, statewide and online. In the last six months, this confidence has been underscored by the remarkable commitment and response by our NAU community to an unprecedented global pandemic,” Cheng said. “While there is still a long road ahead, our planning and response to the pandemic — keeping our eyes totally focused on our academic mission and strategic priorities while engaging in the hard work necessary to keep us on a firm, sustainable financial footing — fills me with pride.”

Kaitlin Olson can be reached at the office at kolson@azdailysun.com or by phone at (928) 556-2253. The Associated Press contributed to this article.

Watch Now: Can you transmit COVID after vaccination?

Watch Now: Can you transmit COVID after vaccination?

As of the first day of in-person classes Monday, the 20th day of the fall semester, Northern Arizona University is down 5% of its student enro…

With in-person classes set to begin at Northern Arizona University on Monday, officials at the school have provided the first set of hard numb…

The Arizona Board of Regents has launched the committee that will oversee the search for Northern Arizona University’s next president.

NAU’s fall 2020 commencement to be virtual, campus COVID-19 cases are less than expected

Although there are nearly two years left until Rita Cheng’s contract expires and she leaves her role as Northern Arizona University President,…

NAU Presidential Search Committee kicks off with emphasis on diversity

A window at The Grove, a student housing complex in Flagstaff, displays the words “Bye Rita” spelled out with sticky notes Tuesday evening. Rita Cheng, president of Northern Arizona University, announced Tuesday that she will not be seeking an extension to her contract.

In this 2016 file photo, NAU President Rita Cheng delivers her State of the University speech at the High Country Conference Center. Cheng has announced she will not be seeking an extension of her contract, which expires in 2022.