Rachel Schneider prepares to cross the finish line of the annual Fourth of July Downtown Mile in first place of the elite women's division Thursday morning. 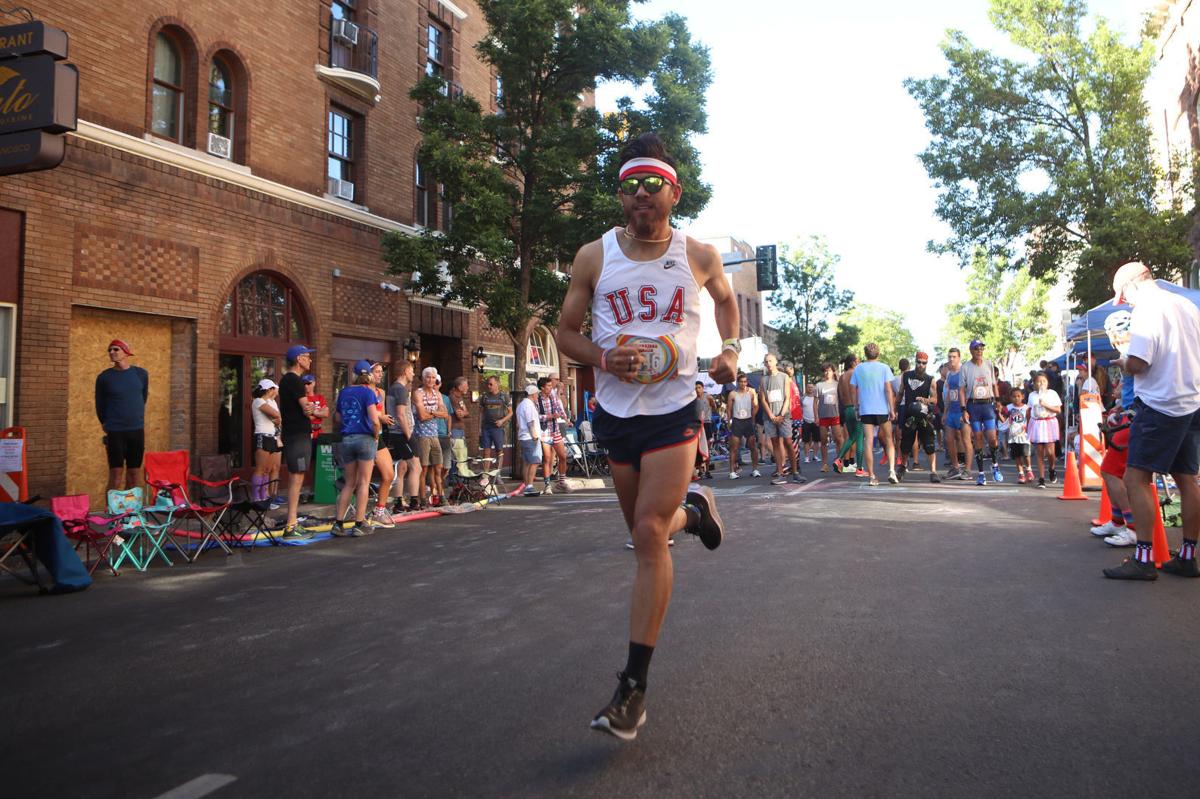 A runner participating in the annual Fourth of July Downtown Mile warms up on San Francisco Street Thursday morning.

After winning the Flagstaff Downtown Mile for a second straight year, one thing still stands out about the race for Pat Casey.

“It feels good when you are done," the repeat winner of the elite men's race said after the annual event hosted by Team Run Flagstaff on Thursday. "It’s really hard when you are racing at 7,000 feet, then there’s that little hill in there. It’s a little hard, but fun.”

Fellow Under Armour athlete Rachel Schneider would agree, especially about the fun part.

“This is just a great way to start the Fourth of July. It’s an incredible tradition," said Schneider, who broke the course record she set a year ago on the way to repeating in the elite women's division.

Casey clocked a 4:18, getting the win by a slim margin over two other competitors in the elite division. John Raneri took second on the men's elite side and Colin Schultz finished third, both coming in under 4:19 as part of the exciting finish.

“In these road races, you never know what to expect, and this town is a hub for running," said Casey, who was four seconds off the course record that he set in 2018.

Schneider finished in 4:46, besting the record of 4:51 she set in last year's installment. She kicked into another gear halfway through the race to outlast a star-studded field that led to speedy times.

Seven runners in the elite women division finished under five minutes. Last year, only Schneider crossed the finish line with a sub-five-minute result.

“It always feels good to get the win," she said.

Especially when it comes against a few other professional runners she trains with in town.

NAZ Elite's Stephanie Bruce finished in third place with a time of 4:51, while her teammates Erin Clark (4:53) and Danielle Shanahan (4:53) took fifth and sixth, respectively. It was the second straight year NAZ Elite was part of the race, now in its eighth year.

Both Casey and Schneider are now 2 for 2 when it comes to the race.

“More tired than I’d like to be, but I got the win," Casey said with a smile.

It was a first appearance for the trio of NAZ Elite runners. It was also Clark's first time racing in a while after dealing with an injury bug that hindered her rookie season. Much like Casey's thoughts of the race, Clark said it took "massive amounts of oxygen" to reach the finish line while running with such a stout group.

A cyclist waving an American flag guides racers participating in the annual Fourth of July Downtown Mile through the course Thursday morning.

“Mostly the goal was to come out and run hard, as hard as I could, and I feel like I did that today and had a great time being back out there," Clark said.

Jess Tonn was the elite women's race runner-up in 4:51, and Baylee Mires crossed the line in fourth in 4:52.

Mike Madsen won the men's masters race after setting the course record for the division last year at 4:51, crossing the line this year in 5:01 to beat William Drexler (5:07) and third-place finisher Jason Troxler (5:08).

Ioana Citireag set a new record for the citizens women's division, winning in 5:23. Fiona Nicholson was second in 5:34, with Colleen Lingley third in 5:38.

In fact, much like last year, records kept getting snapped.

Gabrial Harju, a runner from Flagstaff High School's title-winning cross country team that claimed a fourth consecutive state championship in 2018, posted a 4:46 for the win in the citizens men's division. His time was two seconds better than what fellow Eagle Davis Boggess set last year. Meanwhile, Joel Liechty narrowly took second in the division in 4:57 over Caleb Casolaro.

The title for the masters on the women's side went to Katie McGee, who registered a time of 5:52. Sara Wagner was second in 6:03 and Dawn Greenwalt third in 6:16.

The kids half-mile race saw a new record as well, with Elias Bauerle taking first in 2:01, crushing last year's 2:41 set by Jamison Ping. In its third year as part of the race, the wheelchair race was won by Joseph Spence in 11:25.

And the race itself hit a new PR as 734 total runners registered for the race this year, a number that surpassed last year's total by just more than 100 competitors.

“It’s a real honor to be a part of it," Schneider said.

Flagstaff is not a sleepy town when it comes to Independence Day festivities.

Rachel Schneider prepares to cross the finish line of the annual Fourth of July Downtown Mile in first place of the elite women's division Thursday morning. 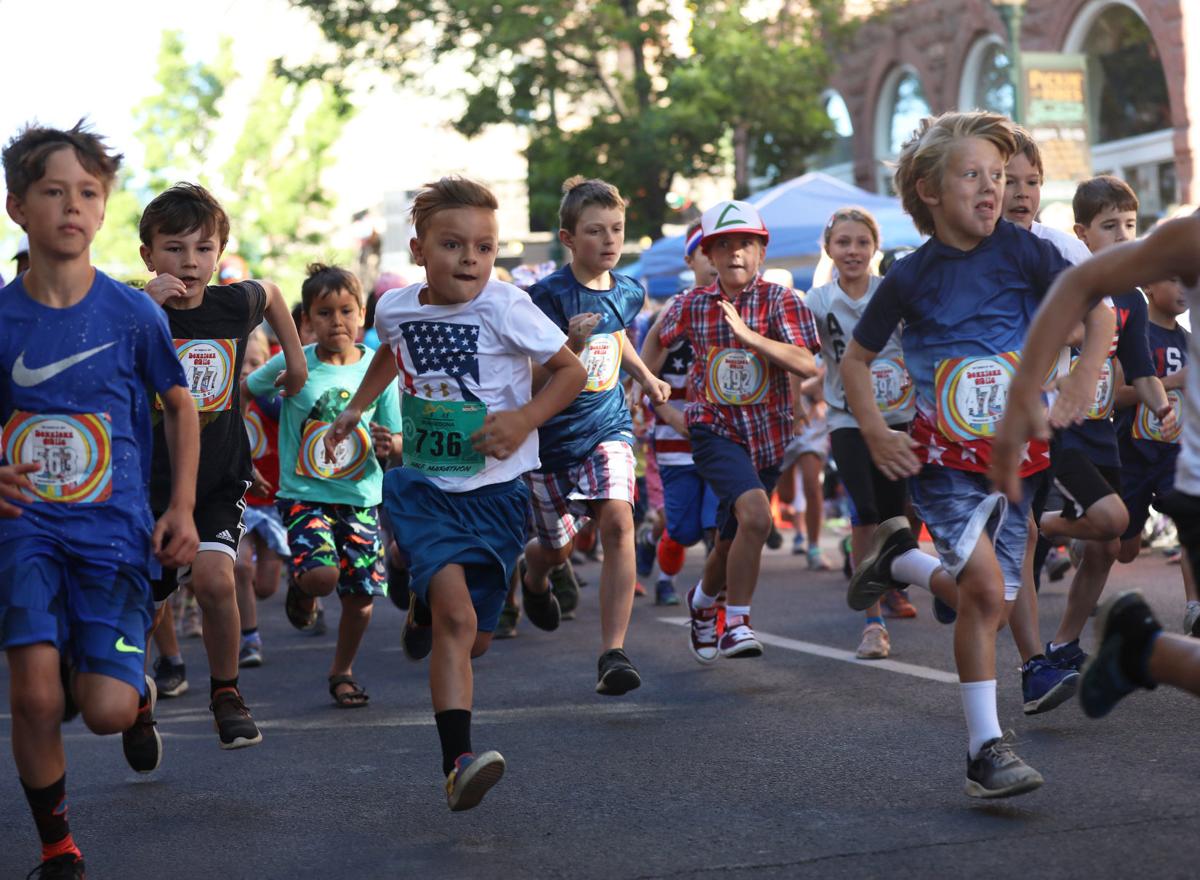 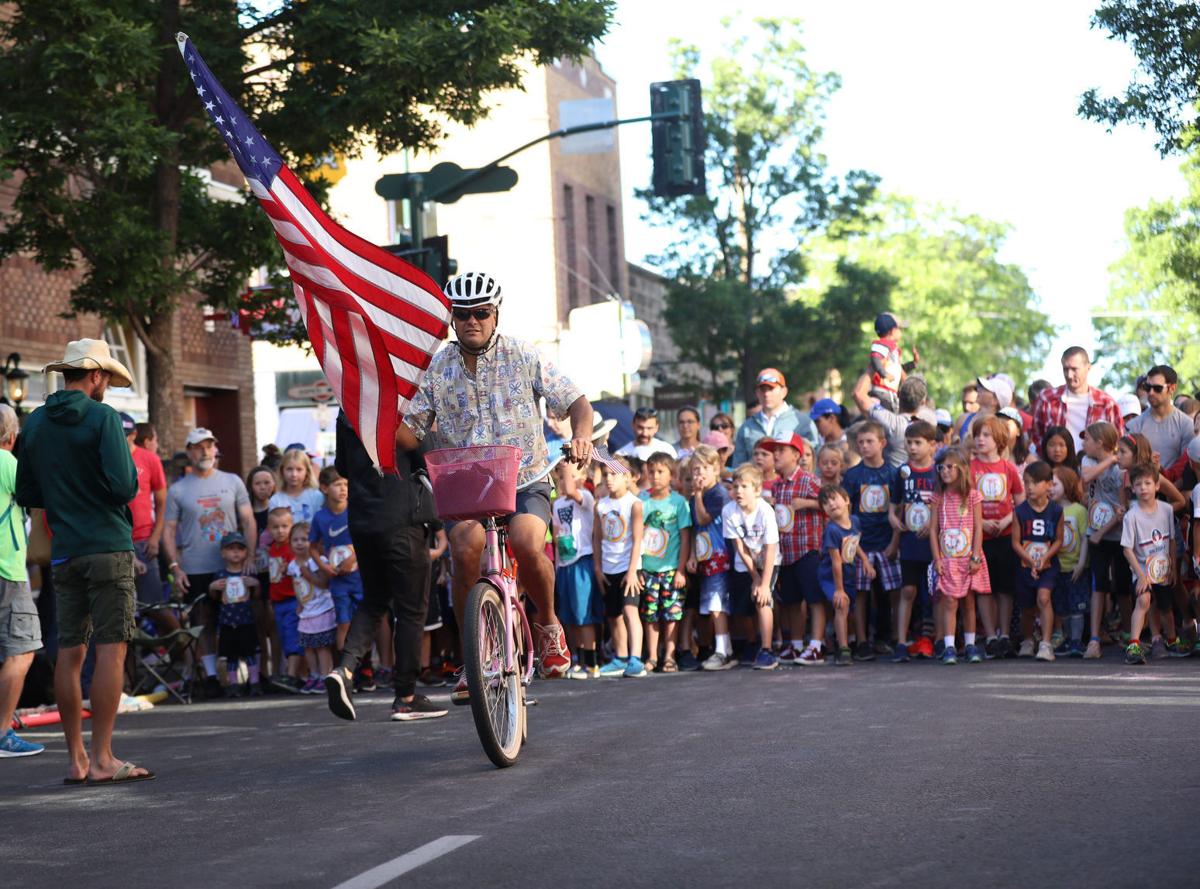 A cyclist waving an American flag guides racers participating in the annual Fourth of July Downtown Mile through the course Thursday morning.

A runner participating in the annual Fourth of July Downtown Mile warms up on San Francisco Street Thursday morning.