Biden takes the helm as 46th president: 'Democracy has prevailed'

Remote learning not the best fit for special education, but teachers, families doing their best
1 comment
Share this
{{featured_button_text}}
1 of 4 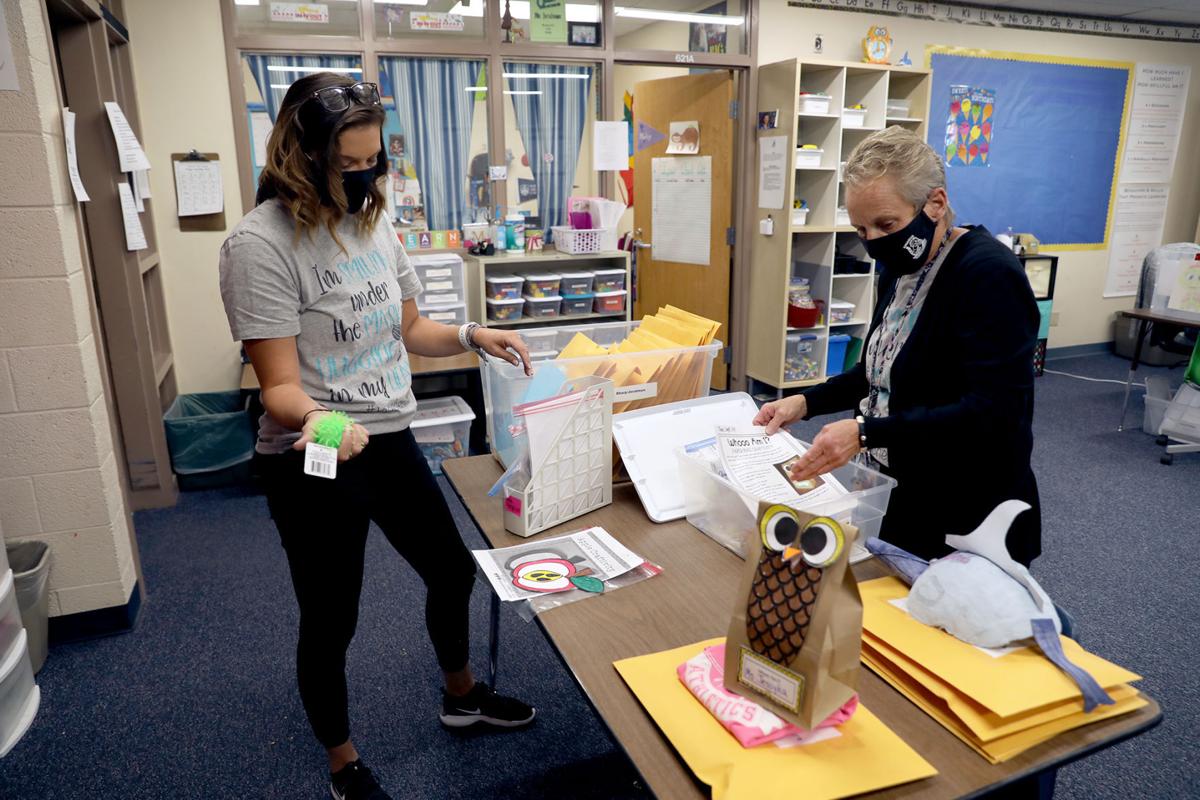 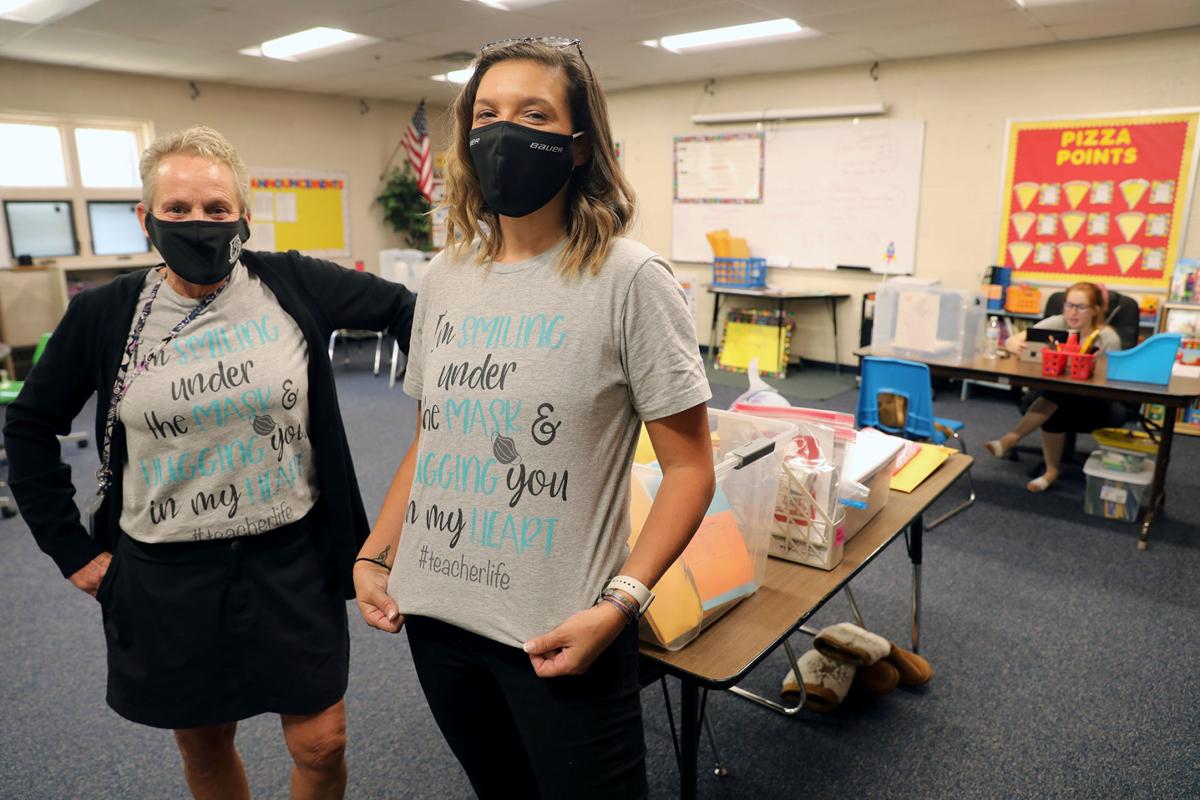 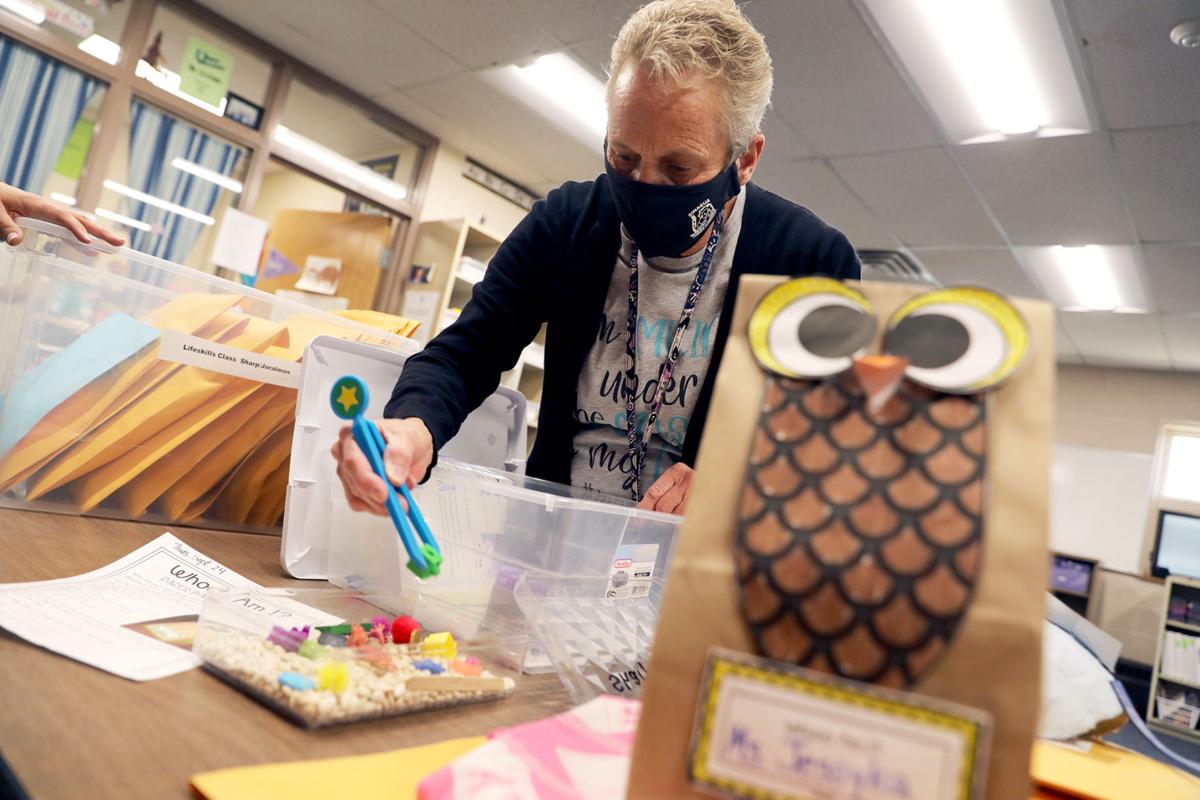 Carol Sharp demonstrates a manipulative activity that is part of the packet sent home to special education students at Sinagua Middle School. 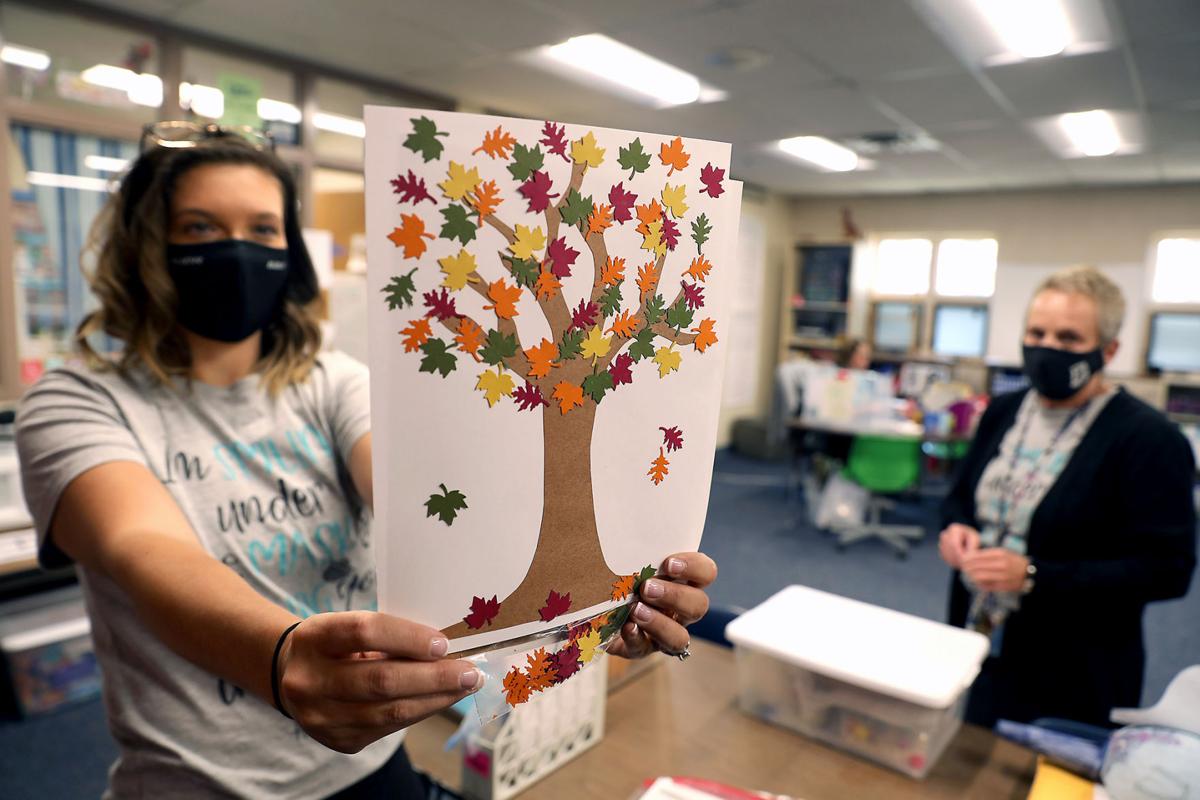 Molly Joralmon, left, and Carol Sharp show a completed project made by one of their students at Sinagua Middle School.

Like their peers, Flagstaff Unified School District’s special education students and their families have become very familiar with remote learning, which in some cases has been even more of a challenge for these unique students, their families and their teachers, who are all hoping to return to school soon.

“There’s no other group that’s more excited about coming back in person than our special education families and students,” said Director of Exceptional Student Services Susan Smith. “We are really itching to get back into the building because we all know that that’s what’s best for our kids.”

Currently, only students in the district’s specialized programs classrooms, who have the most trouble with online learning, are being considered for in-person learning.

Bianca Martich, Marshall Elementary's speech-language pathologist, has been meeting with two such students for in-person lessons, during which she dons a mask and face shield as well as gloves. For the rest of her students, though, she is working with them virtually, using new programs and, unlike in a normal year, encouraging them to take a chance to just chat.

“A lot of speech therapy is play-based, especially in preschool and younger kids. You’re interacting with them and sitting next to them. So that’s been more of a challenge to figure out how to engage those kids online,” Martich said. “We all have kind of had to learn to be tele-therapists -- which we didn’t have to do before and all speech therapy is doing it now.”

At Knoles Elementary, Maria Martinez’ third-grade son Rodrigo has been able to meet with his teacher at school twice a week for an hour each day, according to his Individualized Education Program (IEP).

“He’s really excited when he comes to school. He loves it, obviously,” Martinez said.

But for her eldest son, Miguel, a seventh-grader at Sinagua Middle School, like most other special education students in the district, in-person learning is not currently an option, causing some families and teachers to struggle with remote learning, which the district announced this week will continue until at least the end of fall break on Oct. 19.

“They have their good days and their bad days,” Martinez said of her children’s response to remote learning.

Kyle Hammond is hoping for a return to in-person classes soon because remote learning is not working for her three grandchildren, including one who has autism and another she suspects has a form of attention-deficit/hyperactivity disorder (ADHD), but has been unable to receive testing after first enrolling in FUSD this year. Their mother has been unable to work because of all the time she is devoting to helping them attend Thomas Elementary school online.

“They’re all over the place,” Hammond said of their response to remote learning, explaining how difficult it has been for them to stay engaged with an iPad for hours at a time. “To them, computers are for computer games, video games, that kind of stuff. They just don’t have that concept of, 'This [device] is for school.'”

Hammond said she is concerned these young students are moving backward educationally and has been noticing some startling behavioral changes.

“My third-grader, he has more meltdowns. He is exhausted. He tells me that his eyes hurt and he’s had more headaches. The other two are more rowdy, more rambunctious. They get more argumentative,” she said. “All the things that you hear about kids that have tons of screen time, we deal with all of that, on top of the fact that kids are cooped up in the house all the time. They’re not getting their outdoor play like they would be if they were at school and having recess.”

She doesn’t blame teachers, though, who she said are doing everything they can for her students, but instead called the situation a governing board problem, wishing the board had allowed classes to meet on campus even part-time or outside to give more students access to services such as special education.

Carol Sharp and Molly Joralmon, special education teachers in Sinagua’s Lifeskills Program, said they have been working almost nonstop to accommodate their students remotely, including coordinating a weekly time for families to pick up hands-on materials for their students to complete during their 95-minute classes.

“Our kids are on the screen the whole time with our staff, but it’s not like a lecture course,” Joralmon said. “They’re not having to completely focus on whatever that person is saying … there’s hands-on materials that we’re doing so they are staying busy and are able to move.”

She decided to use animal-named groups to help direct students to the correct links when they are logging into different classes online to prevent them from getting lost on different webpages.

Sharp added that, with 20 students and 10 paraprofessionals in the Sinagua program, the two-to-one ratio has offered more individualized attention to support student progress even during remote learning.

“They did it. We take data every day and we have it -- it’s black and white right there. They all have progressed on their IEP goals,” Sharp said.

Though parent Sarah Dorman noted the exhaustion felt not only by her son Alex, a sixth-grader at Sinagua, but by the entire family as a result of online learning, she explained there have been some unexpected benefits.

Being at home with her son to keep him focused while he attends classes virtually, Dorman said she has able to be a sort of fly on the wall, observing his classes and how he is participating, allowing her to pinpoint what they can work on at home when the virtual school day is over.

The new workspace has also been positive.

“I think going cold turkey back into school with the rigidity would have been really hard for him. As I look at it, this is a good middle ground because he can be at home,” Dorman said, explaining that Alex can dress more comfortably, is able to take breaks in a familiar space and has easy access to things such as snacks and the bathroom. “He’s in a place that’s comfortable, so I think that’s a huge benefit.”

Alex, who has autism and is still getting to know the middle school team, initially struggled with communication with his teachers and his aide, who is working with him remotely, because chat messages were easily buried under other student requests. As a solution, he is now using a separate online document to type his questions when in need of additional support.

Dorman has also been working with a Northern Arizona University professor to gain additional support through one of the university’s education students, a few of whom have been permitted to earn their teaching hours by assisting special education students with remote learning from volunteering families’ homes. It's a program she believes will be extremely helpful, but she still looks forward to the return to in-person classes.

“If proper precautions are put in place, I don’t see why we could not go back. It’s very difficult as a Flagstaff Unified parent to watch all your friends down in the Valley with kids in special needs being able go back in person and watching your kid struggle at home. And they have worse numbers than we do. I understand local government prevails, and I respect that, but I think at some point we have to look at the needs of the students, too,” Dorman said.

Smith said she realizes online learning is not what is best for most special education families and, as FUSD prepares for a possible reopening, she wanted to assure families' decisions will be made on an individual basis, to pick the learning model that works best for each student.

“We luckily have already started some in-person [learning], so we have that to build on, and I think our teachers are more comfortable and they’ve been seeing students individually, so it’s a good process for us to now step that up and start seeing more kids in person. We’re ready for it. … It’s going to be exciting to see where that brings us because it’s going to bring us to a better spot than where we are now,” Smith said.

According to the Arizona Department of Education’s Considerations for Students in Reopening Schools report, considerations for medically fragile students and those with disabilities emphasize providing equitable access to the general curriculum according to their IEPs. Guidance for both full in-person and hybrid learning models, with students attending varying classes online and in-person, also includes possibly providing one-to-one or small group instruction and paraprofessional support as well as determining individual personal protective equipment needs.

If FUSD adopts a hybrid learning model, special education services will be delivered in person, remotely or as a combination of both based on individual needs, according to a presentation made to the school board this week. In an earlier report, FUSD specified that these needs will be determined through means including surveys, data collection and interaction with and observation of students.

There is still work to be done within Flagstaff Unified School District to improve equity and diversity among students and staff, according to…

NPA classes to remain online until at least January

As Flagstaff Unified School District officials wait for the community to meet health benchmarks that would allow for reopening schools, the te…

Carol Sharp demonstrates a manipulative activity that is part of the packet sent home to special education students at Sinagua Middle School.

Molly Joralmon, left, and Carol Sharp show a completed project made by one of their students at Sinagua Middle School.