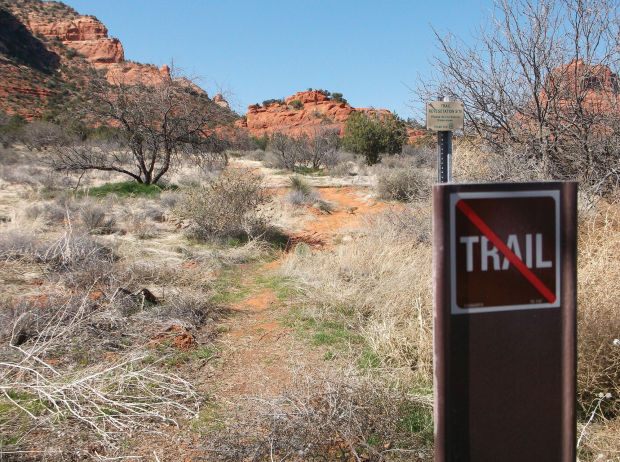 A sign shows a trail near the Village of Oak Creek that is off-limits. (Randy Wilson/Arizona Daily Sun) 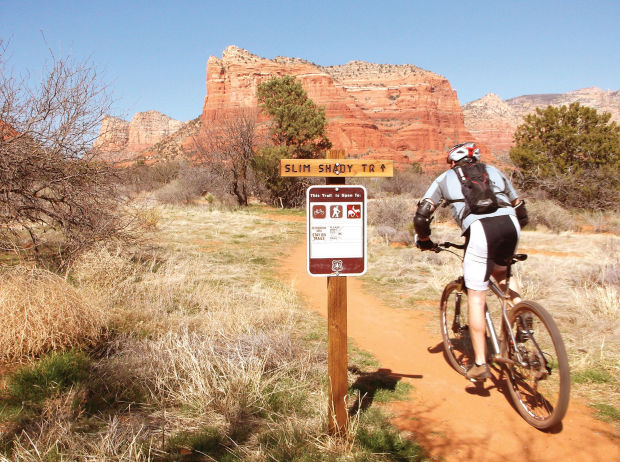 A cyclist heads north on the Slim Shady Trail west of Highway 179 near the Village of Oak Creek. The Coconino National Forest converted a network of informal trails in this area into several approved trails, while formally closing the rest. (Randy Wilson/Arizona Daily Sun)

Portions of about 12 square miles of Coconino National Forest near Sedona are now off-limits to off-trail mountain biking, except for slick-rock areas.

Bikers can use official trails, but they are mostly prohibited from going cross-country in these three regions adjoining Sedona.

The areas near Schnebly Hill, Cathedral Rock and the Scheurman Mountain area near West Sedona south of Highway 89A are the subject of new restrictions enacted by Coconino National Forest Supervisor Earl Stewart on March 13 and set to last initially for two years through May 2015.

Bikers violating the new rules now face misdemeanor charges and fines of up to $5,000 per person, $10,000 for organizations and/or up to six months in jail if caught biking cross-country, though the Forest Service plans a period of outreach and education ahead of enforcement.

First-time penalties are more likely in the realm of $125 fines, a spokesman for the Coconino National Forest said Monday.

The Forest Service added 45 miles of informal, user-built trails to the trail system in Sedona, bringing total trail mileage in and around the community to 170.

It casts the decision as a way to prevent further damage from illegal trail-building and cross-country bike riding on sensitive soils while the it develops a comprehensive trail system for bikers, hikers and horse-riders.

Moab Utah has already developed such a system.

"Mountain biking is a legitimate and growing use of the national forest and especially around Sedona," District Ranger Heather Provencio said, according to a written statement. "However, we encourage a 'stay-on-trail' ethic for all users in all areas, and over the past several years we've noticed an increase in off-trail damage due to mountain biking. This is why these restrictions are focused on keeping bikes on trails in the most sensitive areas ..."

Two out of the three areas under these new regulations lie between the city of Sedona and Coconino National Forest wilderness areas.

The Coconino National Forest said it had considered putting a broader area off-limits to cross-country bicycling, but decided against it after offers of help and education from the Verde Valley Cyclists Coalition and International Mountain Bike Association.

Matt Sherwood is a mountain biker and works at Over the Edge Sports in Sedona, and he says there's been a lot of misinformation about what the Coconino National Forest has proposed and now enacted.

"I've had a lot of people call or come into the shop and ask if the trails in Sedona were being closed," he said.

The changes have led to some sharp disagreements around town.

He sees both sides: A number of the trails that exist on national forest lands surrounding Sedona were made long ago, without permission, and they form the core of a good trail system that he wants to keep.

But he thinks the Forest Service is heading in the right direction in protecting fragile soils and keeping more clusters of spider-webbing trails from forming.

"I really hate when I see a set of bike tracks that just take off the side of the trail, and someone's like, 'I'm going to ride over here and see where this goes' and before you know it five other people follow that, and there's all these side trails that don't make any sense," he said.

He says he's not out to ruin people's fun.

"I want to see more trails here, but I also want to see it done the right way," Sherwood said.

See a general map of what's changing at http://goo.gl/8JxsJ.

A sign shows a trail near the Village of Oak Creek that is off-limits. (Randy Wilson/Arizona Daily Sun)

A cyclist heads north on the Slim Shady Trail west of Highway 179 near the Village of Oak Creek. The Coconino National Forest converted a network of informal trails in this area into several approved trails, while formally closing the rest. (Randy Wilson/Arizona Daily Sun)