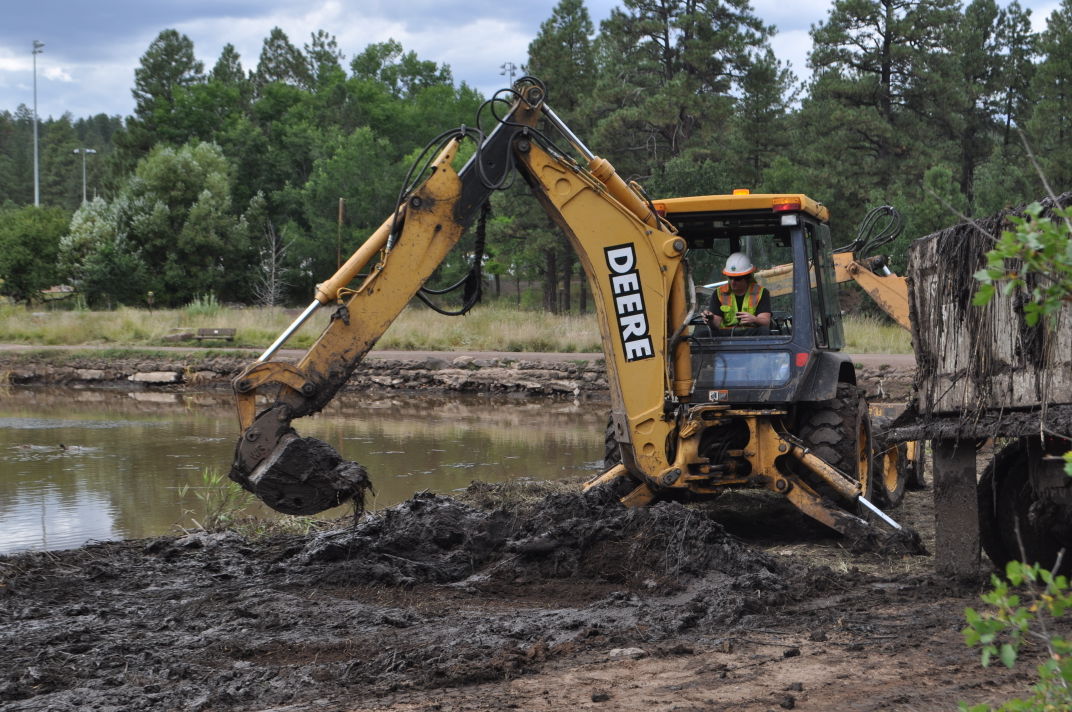 An backhoe scoops up sediment from Frances Short Pond on Wednesday as part of the city of Flagstaff's two week restoration of the pond. Removing bulrushes and algae from the pond helps increase oxygen levels in the water, which is beneficial to fish. 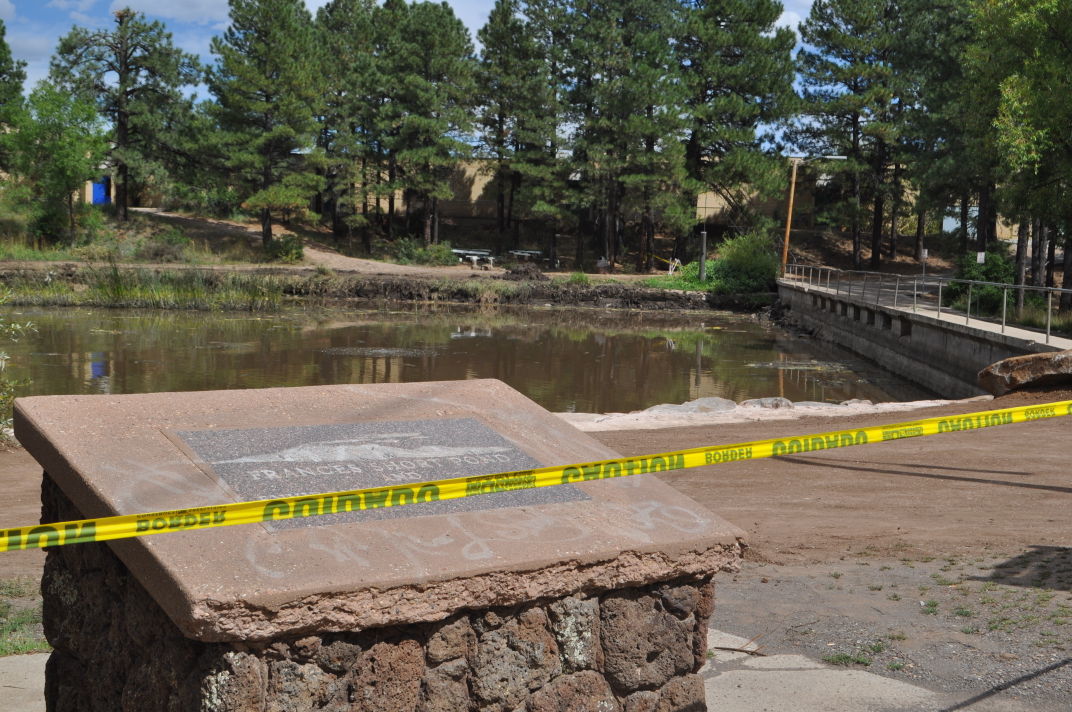 The banks of Frances Short Pond, once covered with cattails, are now almost bare after the city spent two weeks dredging the pond and removing vegetation to improve water quality.

The city of Flagstaff will be setting up a new way to manage Frances Short Pond after it finishes up a $40,000 vegetation removal and trail restoration project over the next two weeks.

Until now, the pond has been overseen by a maze of city departments and community members, said David McKee, with the city’s stormwater management department. McKee said the new operations and maintenance plan the city is planning to develop would better manage water levels, measure local precipitation and set out a regular cleanup schedule so that such massive dredging projects aren’t needed as much. It would also specifically dedicate city staff time and a budget to the pond’s maintenance, he said.

The current dredging project no doubt has short-term impacts on the pond's fish and other wildlife, but it’s a necessary sacrifice for the long-term benefits to water quality and vegetation levels, said Alan Haden an aquatic ecologist with Natural Channel Design, which was involved in a 2005 restoration of the pond.

“There are so many competing interests and whenever you get that you’re going to have to have some maintenance along the way to kind of reset things and get them all working together,” Haden said. “It was realized it would probably have to be done.”

Since the Frances Short pond was last dredged a decade ago, sediment has built up and vegetation like bulrushes and algae have grown more dense, increasingly encroaching on the open water.

That’s a problem because during the times when those plants aren’t photosynthesizing, such as at night or when the pond is covered in ice, they respire, pulling oxygen from the water. That lack of oxygen has caused fish dieoffs in recent years, Haden said.

The city started to think about a pond cleanup after receiving comments from groups and individuals around the community who noticed the pond seemed to be getting overgrown, McKee said.

The city decided to pursue restoration work now because the Arizona Department of Game and Fish is approaching another fish-stocking date, meaning numbers of fish remaining in the water at this point are relatively low. This is also a good time when waterfowl aren’t migrating or mating near the pond, McKee said.

While there aren’t any efforts to monitor the impacts of the dredging and pond cleanup on fish or other aquatic life, McKee said the effect is similar to what would be caused by a massive flood flushing through the area and uprooting much of the vegetation. That sort of environmental change is a good thing, promoting diversity in aquatic ecosystems by preventing one organism from becoming too dominant in one place, Haden added.

“Disturbance can be a positive force for aquatic ecosystems,” he said.

As for the estimated 2,500 cubic yards of woody debris, bulrushes and mud that was pulled from the pond, it will be dried in the nearby parking area and then trucked to an area of Picture Canyon Natural and Cultural Preserve near the Rio de Flag. The material will be used for a berm opposite the Flagstaff Urban Trail that winds along the Rio to better shield the trail from nearby industrial operations.

“The great thing is we’re reusing it for beneficial uses on another project,” McKee said. “None of this is going to the landfill.”

After beginning the pond restoration work at the end of August, city crews opened the trails around the pond on Friday. Work on cleaning up and rehabbing the banks will continue over the next couple of weeks, said Michael O’Connor, public works section director.

As part of the effort to improve the pond, the city’s stormwater department is planning to sponsor its annual Make A Difference Day project there on Oct. 24, McKee said.

In the long term though, the goal is to have a community group adopt the pond, he said.

PEORIA -- If this is what self-imposed exile — aka retirement away from Flagstaff — looks like for Bill and Barbara Packard, then everyone sho…

In a typical year there are plenty of events in the Flagstaff area for residents to look forward to. There’s the Flagstaff Hullabaloo at Wheel…

In a split vote, the Coconino County Board of Supervisors denied approval for a new planned community subdivision in Kachina Village last week.

Coconino County Deputy Manager Joanne Keene will be leaving the county in order to take the position of deputy city manager for the City of Sedona.

Leupp Elementary School will be returning to remote learning on Monday, April 19. The news came from the Flagstaff Unified School District Thursday afternoon in response to a “direct notification from the Office of Navajo Nation President Jonathan Nez.”

CARSON CITY, Nev. — The man-made lakes that store water supplying millions of people in the U.S. West and Mexico are projected to shrink to hi…

An backhoe scoops up sediment from Frances Short Pond on Wednesday as part of the city of Flagstaff's two week restoration of the pond. Removing bulrushes and algae from the pond helps increase oxygen levels in the water, which is beneficial to fish.

The banks of Frances Short Pond, once covered with cattails, are now almost bare after the city spent two weeks dredging the pond and removing vegetation to improve water quality.