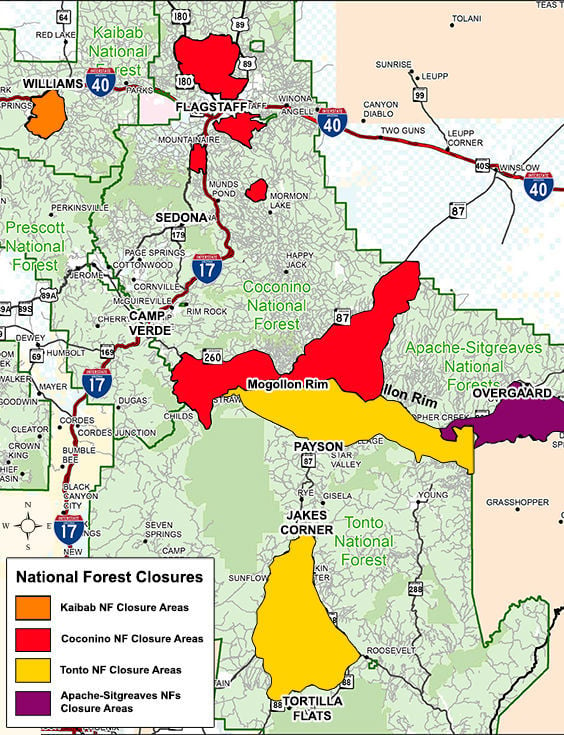 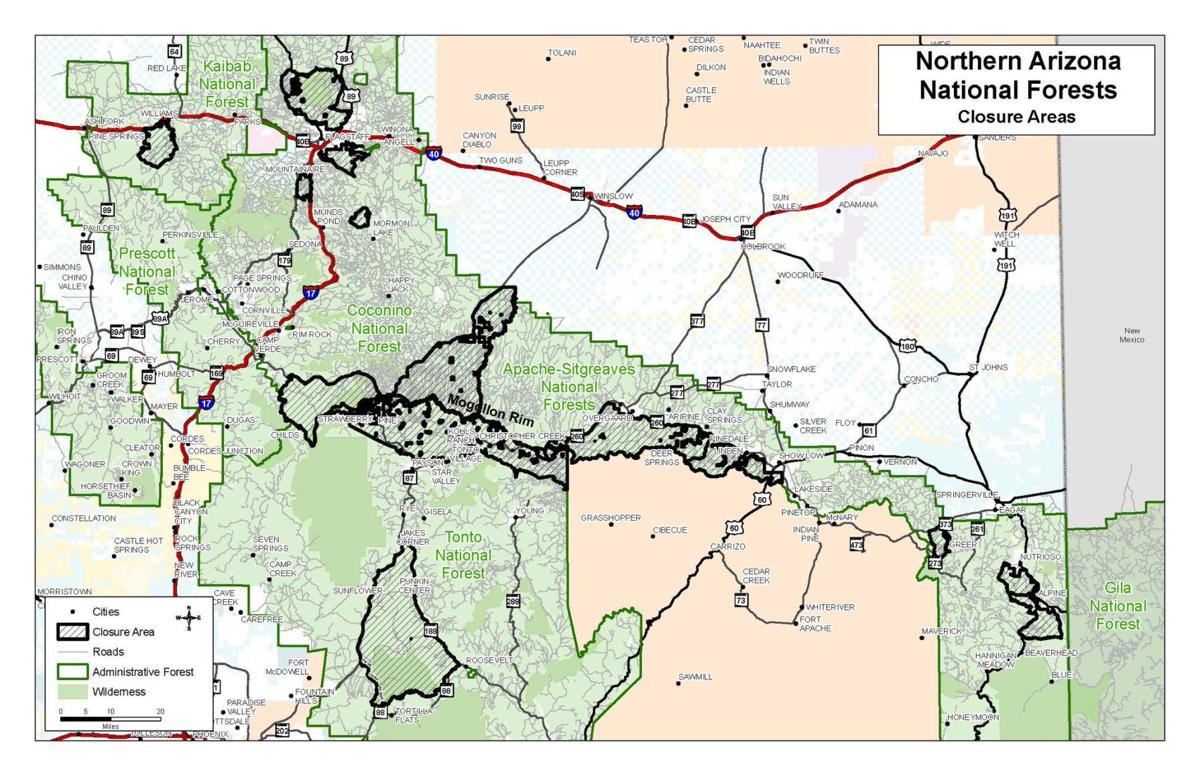 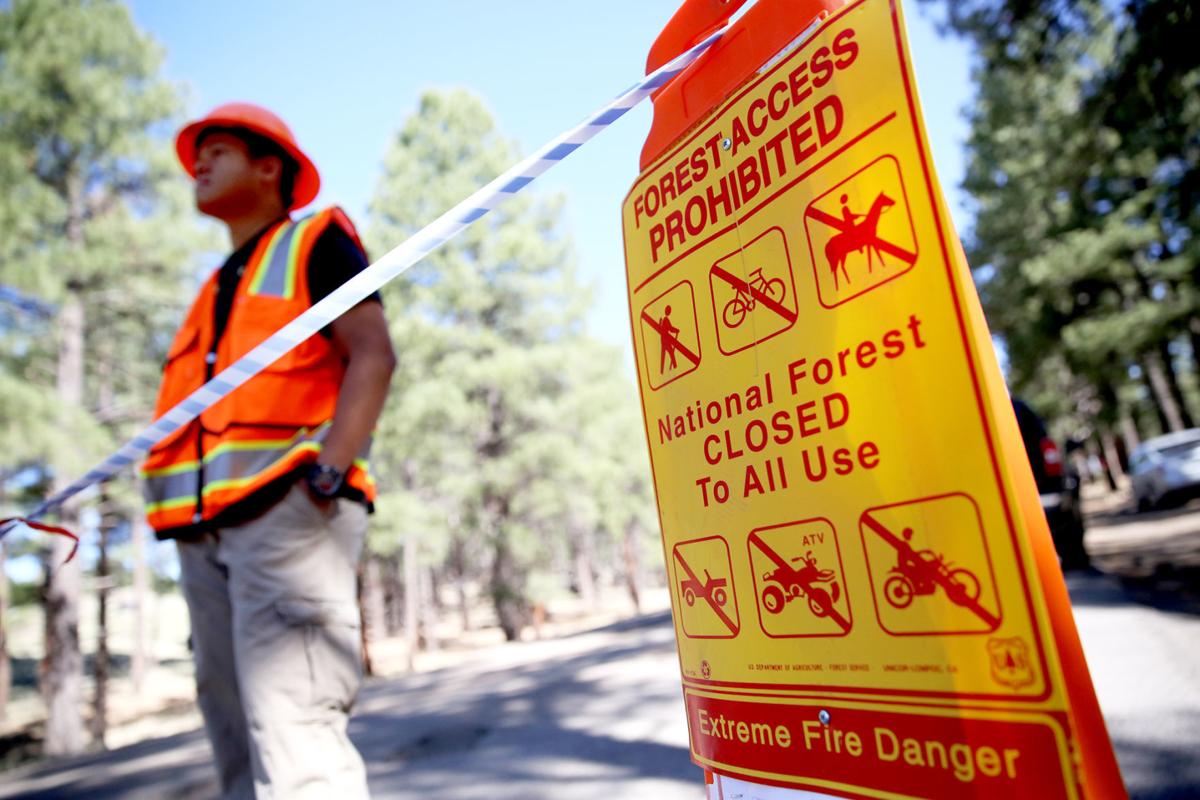 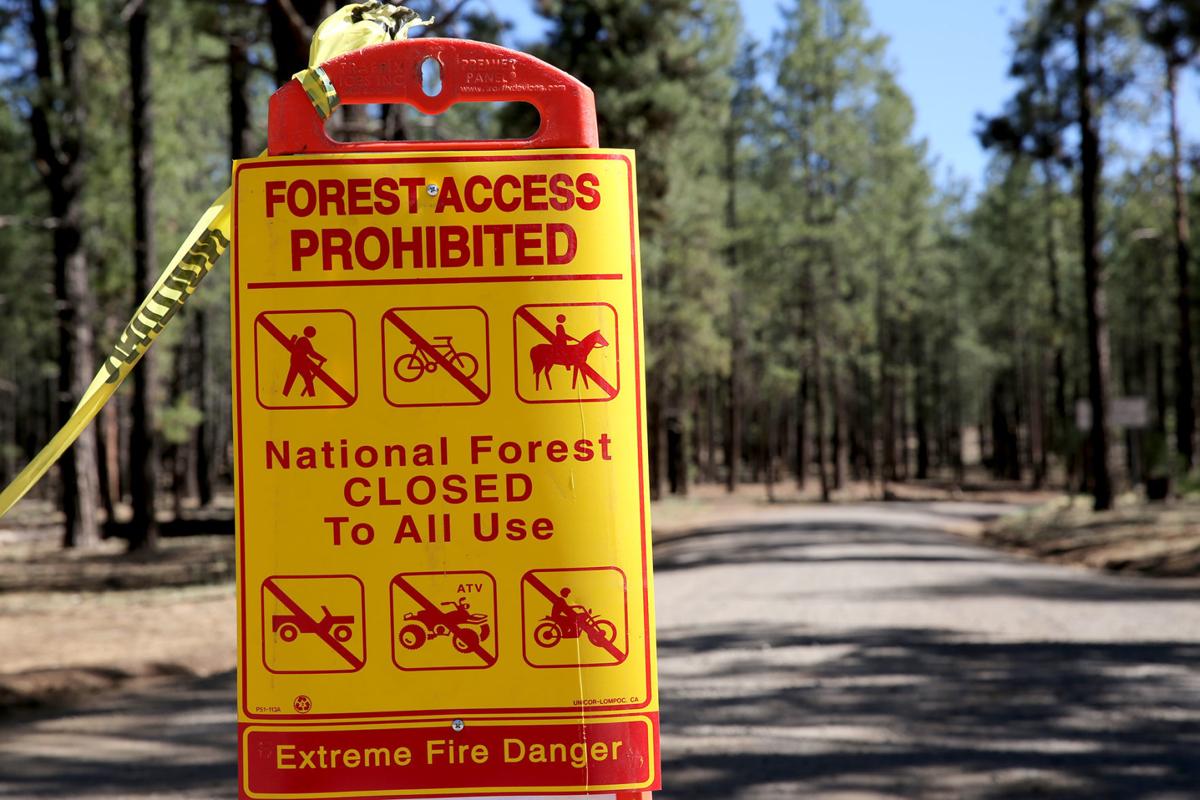 A sign indicates that the section of the Coconino National Forest surrounding Hart Prairie Road (FR 151) off Highway 180 is closed due to extreme fire danger Wednesday morning. Forest closures went into effect at 8 a.m. Wednesday.

Closures of big parts of the Coconino, Tonto and Apache-Sitgreaves national forests took effect Wednesday, in addition to the closure of state-owned and managed lands in Coconino County south of the Grand Canyon and all of Gila, Navajo and Apache counties. Also closed is Bill Williams Mountain on the Kaibab National Forest.

Dangerous wildfire conditions have prompted the closures, which include many campgrounds and recreation areas in northern Arizona.

In addition, Coconino County and the city of Flagstaff have implemented Stage 3 fire restrictions, which now include a ban on all open-flame devices, even with an on/off switch, on public land and private campgrounds

Gas grills and portable gas stoves that have an on/off switch are still allowed in private residences.

On the parts of the national forests that are still open, gas grills are still permitted.

Following are the closures on the Coconino National Forest:

--Kelly Canyon, Pumphouse Wash: Areas south of Kachina Village between Highway 89A and Interstate 17 and north of Forest Roads 253 and 253E.

Private land is not affected by the closure orders in these areas. Arizona Snowbowl will be allowed administrative access and can host already-booked indoor events only. It will not be opening its outdoor summertime operations, including the scenic chairlift, General Manager J.R. Murray said.

The rest of the Coconino National Forest remains in Stage 2 fire restrictions, which prohibit all campfires, even in designated developed campgrounds, as well as charcoal, coal or stove fires. Smoking (except within an enclosed vehicle or building), discharging a firearm and possessing or using a motor vehicle off National Forest System designated roads are also prohibited under these restrictions (except in the Cinder Hills).

The Kaibab National Forest implemented its own closure order covering the Bill Williams Mountain area on May 11. That forest is also in Stage 2 restrictions for all areas except those north of Grand Canyon National Park, which are in Stage 1 restrictions. Those restrictions prohibit campfires outside of designated developed campgrounds.

There are two area closures on the Tonto National Forest along the Mogollon Rim and within the Mt. Ord, Four Peaks and Three Bar Wildlife areas.

Apache-Sitgreaves National Forests officials say four areas in the two jointly-administered forests in eastern Arizona are now closed to the public because of elevated wildfire conditions.

The largest area closed Wednesday lies south of State Route 260 and extends from near Forest Lakes on the west to near Show Low on the east.

On state lands in the four counties mentioned above, the closures apply to:

Closed to Protect the Forest

Know before you go - Lots of information available

Going To The Next Level

It is officially past the halfway point of 2018. Here is a look at the top 10 viewed Daily Sun articles this year so far. From snowstorms, to …

Six large areas of the Coconino National Forest will be closed to all public access starting Wednesday May 23.

Six large areas of the Coconino National Forest will close to public access starting Wednesday at 8 a.m. due to extremely dry conditions and v… 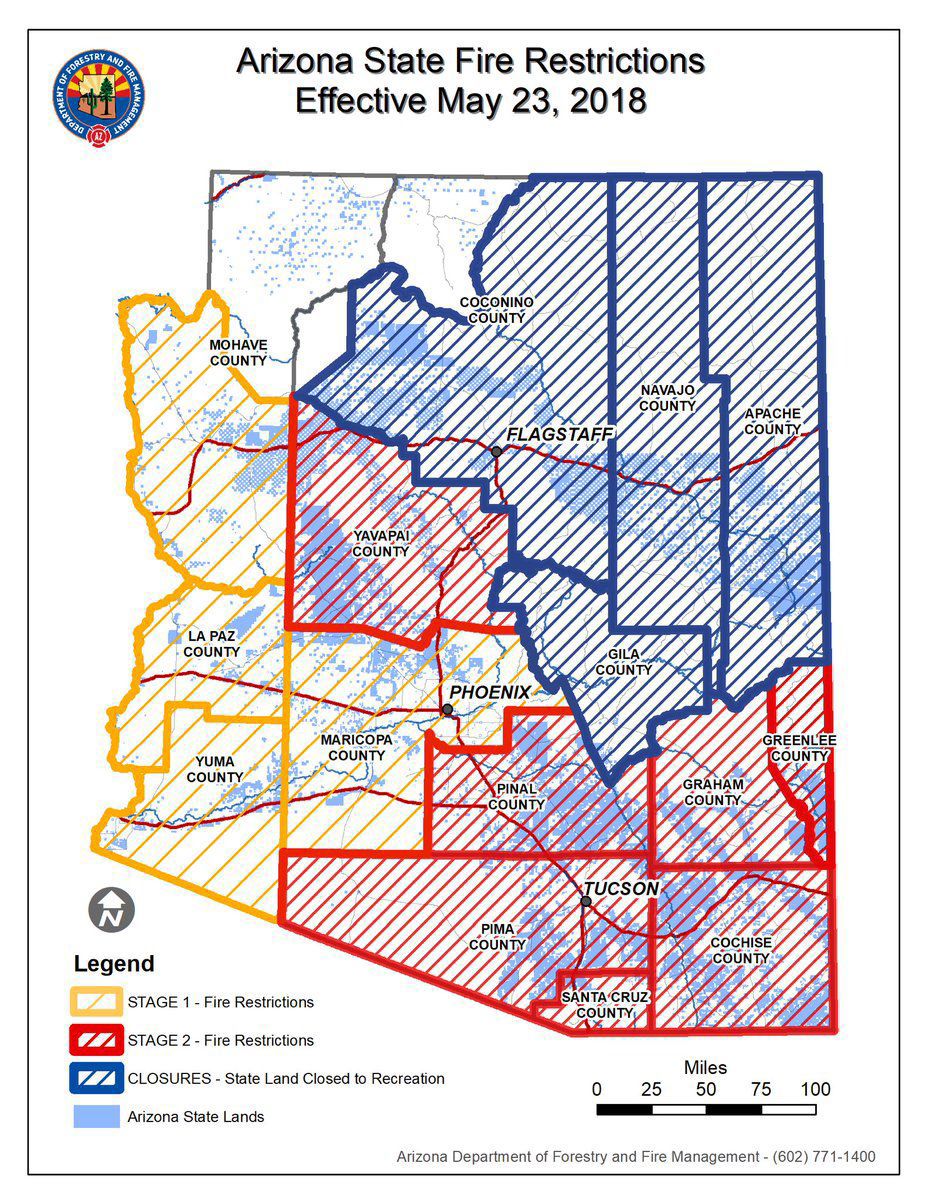 All state lands in Coconino County south of the Grand Canyon will be closed to public access starting Wednesday at 8 a.m.

A sign indicates that the section of the Coconino National Forest surrounding Hart Prairie Road (FR 151) off Highway 180 is closed due to extreme fire danger Wednesday morning. Forest closures went into effect at 8 a.m. Wednesday. 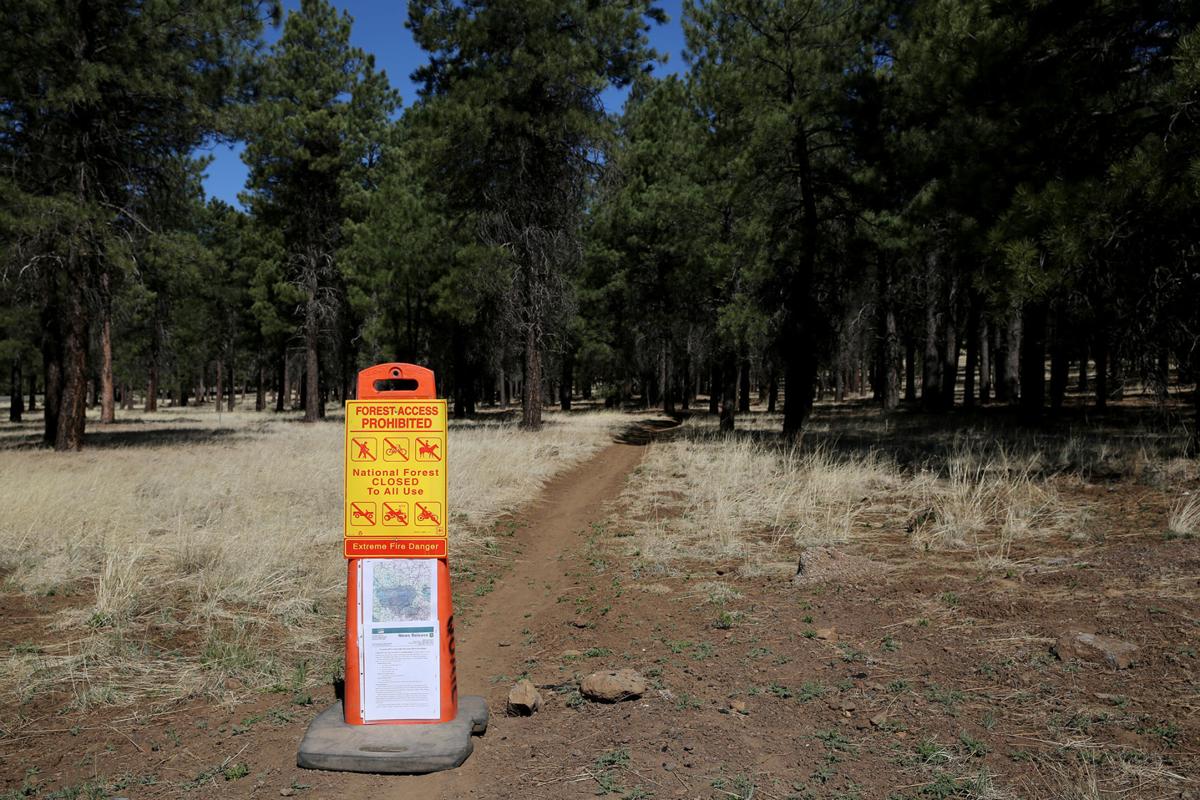 A forest closure sign sits in the middle of a footpath leading from a parking lot east of Highway 180 Wednesday morning. Forest closures due to extreme fire danger went into effect at 8 a.m. Wednesday.