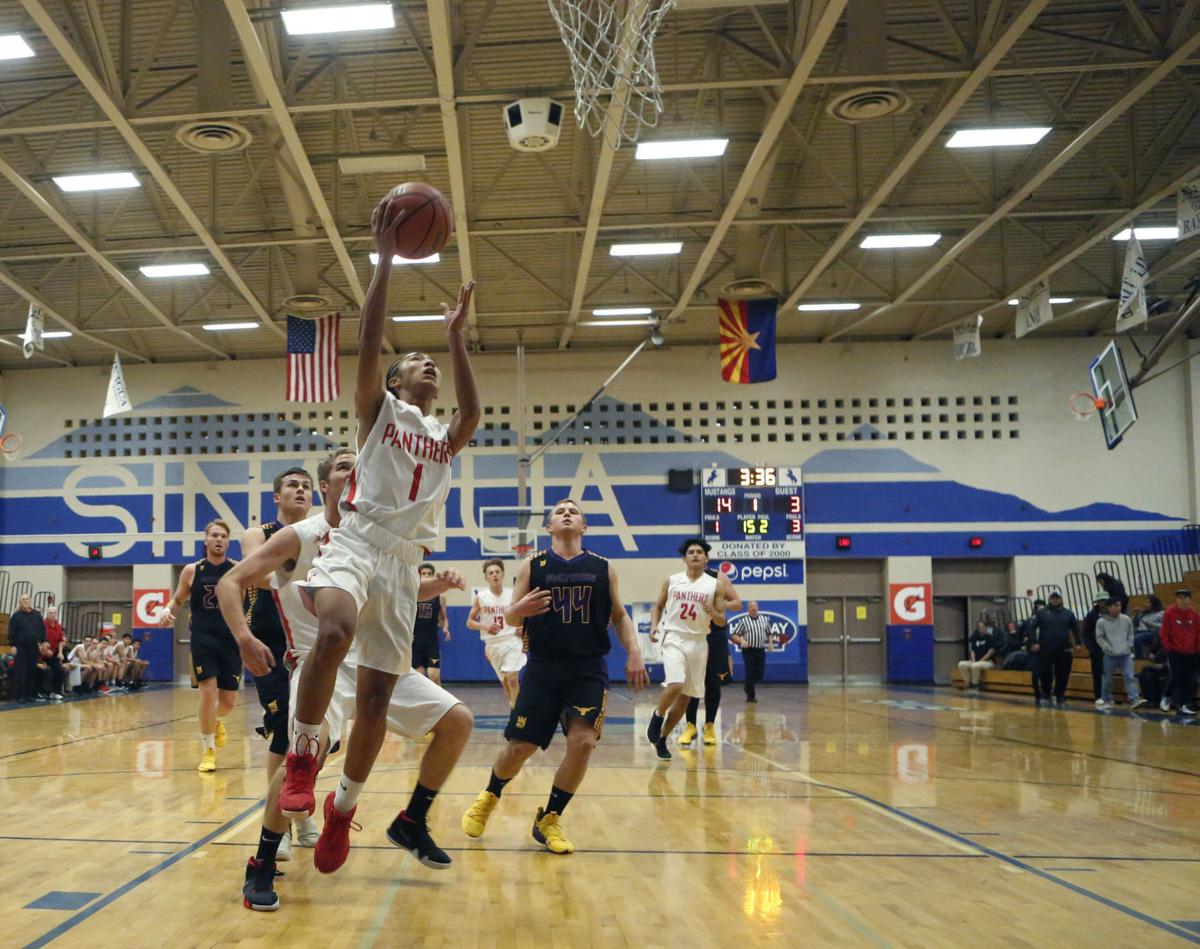 Coconino’s Preston Olney (1) breaks away from the Payson defense for a layup at Sinagua Middle School during the first round of the Pepsi Holiday tournament last season.

Coconino’s Preston Olney (1) breaks away from the Payson defense for a layup at Sinagua Middle School during the first round of the Pepsi Holiday tournament last season.

Coconino Panthers head coach Mike Moran likened the trajectory of his group on the hardwood to that of the football program he played a role in building back up.

The Panthers boys hoops squad had a resurgent season in 2017-18, posting a 16-3 overall record and the top mark in the Grand Canyon Region -- then the 4A Conference team was hit with growing pains last season with a young roster.

Moran compared the upcoming basketball season to the one the football team just had -- a young upstart team hoping to break out and use past experience for the better. He said the team learned from those big games last year, much like the football team did this season and last.

“Last year we were so young and we were only one game behind the region champion in Lee Williams; we went down and almost beat them,” Moran said. “We’re gonna be a lot tougher, stronger and more experienced. We know it's time.”

Three of Coconino’s top four scorers were sophomores as the team went 8-10 and 8-4 in the region -- falling just one game shy of region champ Lee Williams and a few spots shy of a play-in berth after losing the final two games of the season by single digits.

One of those key sophomores -- point guard Roy Billups -- transferred east on Interstate 40 to 3A Winslow, but guards Preston Olney and Jacob Begay lead a team looking to make a jump this season.

Olney comes back as the reigning Grand Canyon Region Defensive Player of the Year after he averaged a team-high 10.7 points per game, 2.1 steals, 2.8 assists and 2.2 rebounds per game. He primarily played off Billups last season and will shift over to point this year, where his coach expects the guard to make a jump on the offensive end.

“He’s shooting long range -- I mean the kid is like Steph Curry to me,” Moran said. “He’s got such a rhythm that he works on every day. He’s been shooting the lights out. He’s just a competitor and one of the best basketball players I’ve ever coached.”

Moran expects a player that was a bit overshadowed last season to also make a leap this year in Avram Tijerin. He only appeared in 15 games, but has impressed Moran with his outside shooting so far heading into the year.

The Panthers look set at wing and guard, but have a bit of a question mark inside.

Losing Brennan Motes to graduation could hurt the Panthers as the 6-foot-6 big was one of the team’s most consistent players a season ago.

Motes was second in scoring on the team with 10.6 points per game while hauling in a team-high 7.6 rebounds per game -- 3.3 coming on the offensive glass. Senior Anthon Watson will be vying with Williams High School transfer William Mcmenamin for playing time in the middle.

Watson played backup to Motes while Mcmenamin was the 2019 1A Central Player of the Year after he averaged 21.3 points, 11.5 boards and 3.8 blocks per game as a junior.

The 6-foot-6 transfer could be a massive addition to the Panthers this season.

“We’re thrilled to have him,” Moran said. “He’s a great young man and a monster in the middle. I’m telling ya people are gonna notice him when he starts playing. This kid is a beast.”

The Panthers sit with Prescott, Bradshaw and Lee Williams in what looks to be a wide-open region race. But for Moran, the region still goes through the region champs.

Mingus Union graduated most of its top scorers -- which could easily lead to a down year for the Marauders after making the 4A play-in round last year. Flagstaff is a wild card entering the season as the Panthers' crosstown rival lost a number of key seniors from last season.

Coconino opens the season on the road Tuesday at 4A St. Mary’s -- a team that is retooling after it had a 13-4 record and a playoff appearance last season. The Knights expect to be in the hunt for the 4A playoffs again this season.

Tuesday’s tip-off is set for 7 p.m. in the Valley.