Outdoors: Surviving a 'trail' by fire
3 comments
Share this
Return to homepage × 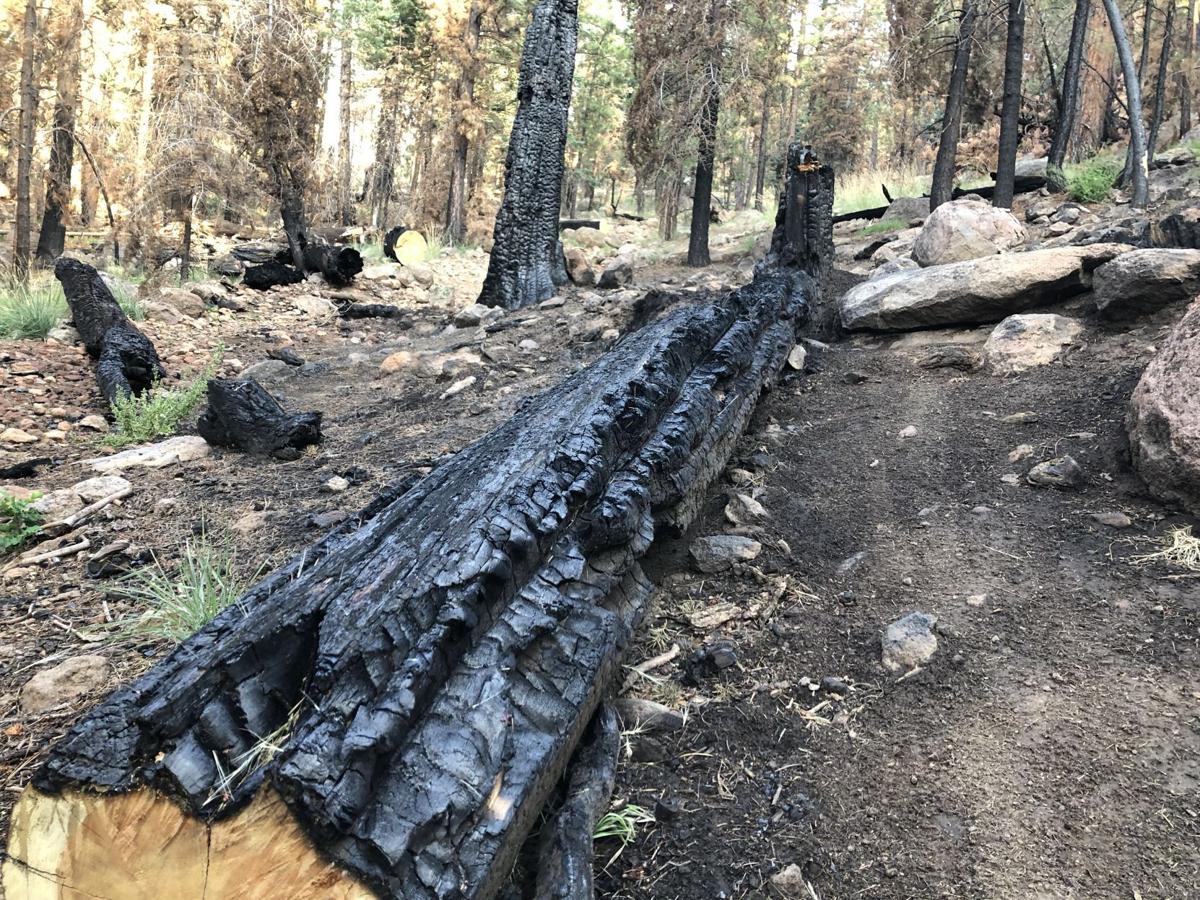 The charred remains of ponderosa pines from the 2019 Museum Fire are strewn throughout the climb up the Brookbank Trail, which recently reopened for use. 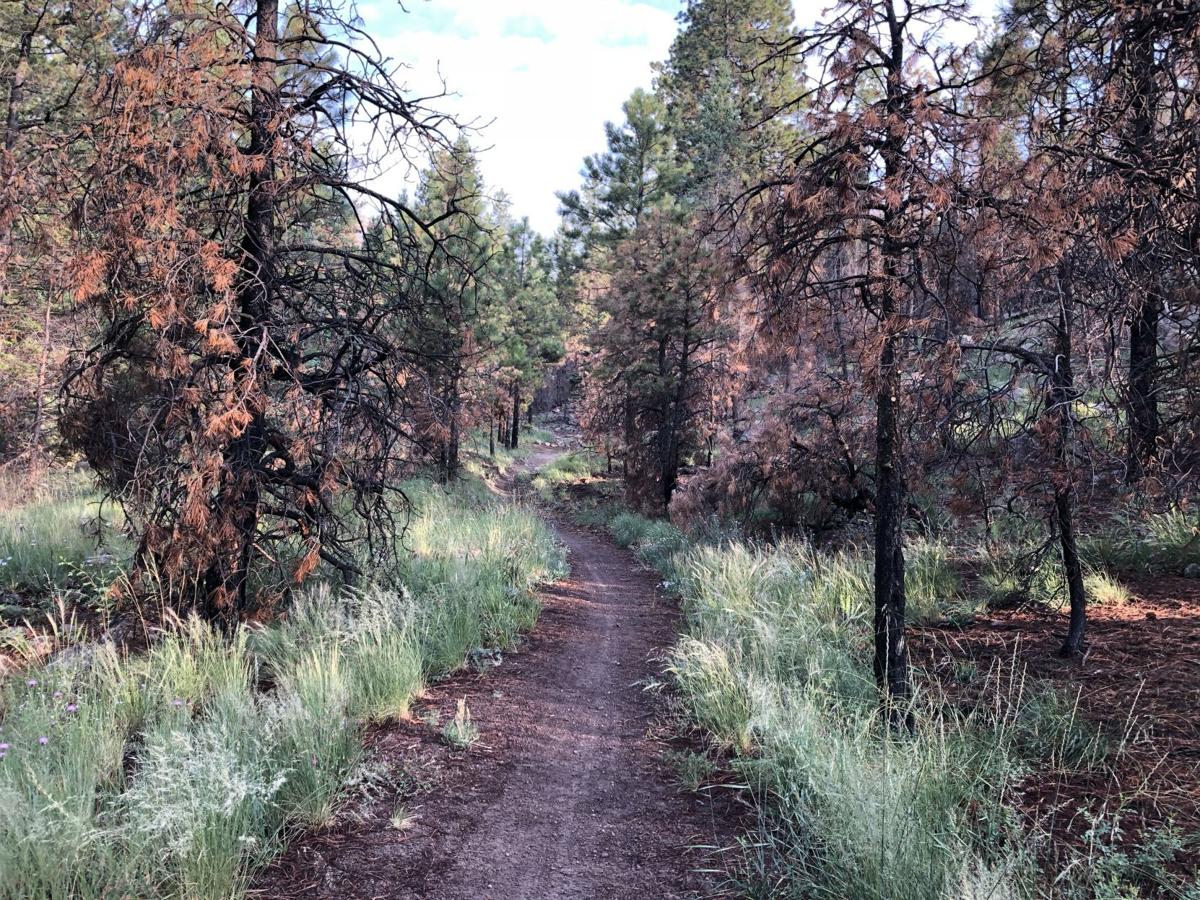 Making the turn onto the newly reopened Brookbank Trail, you can see the devastation wrought from the 2019 Museum Fire. Trees are scorched and dying, but still standing. 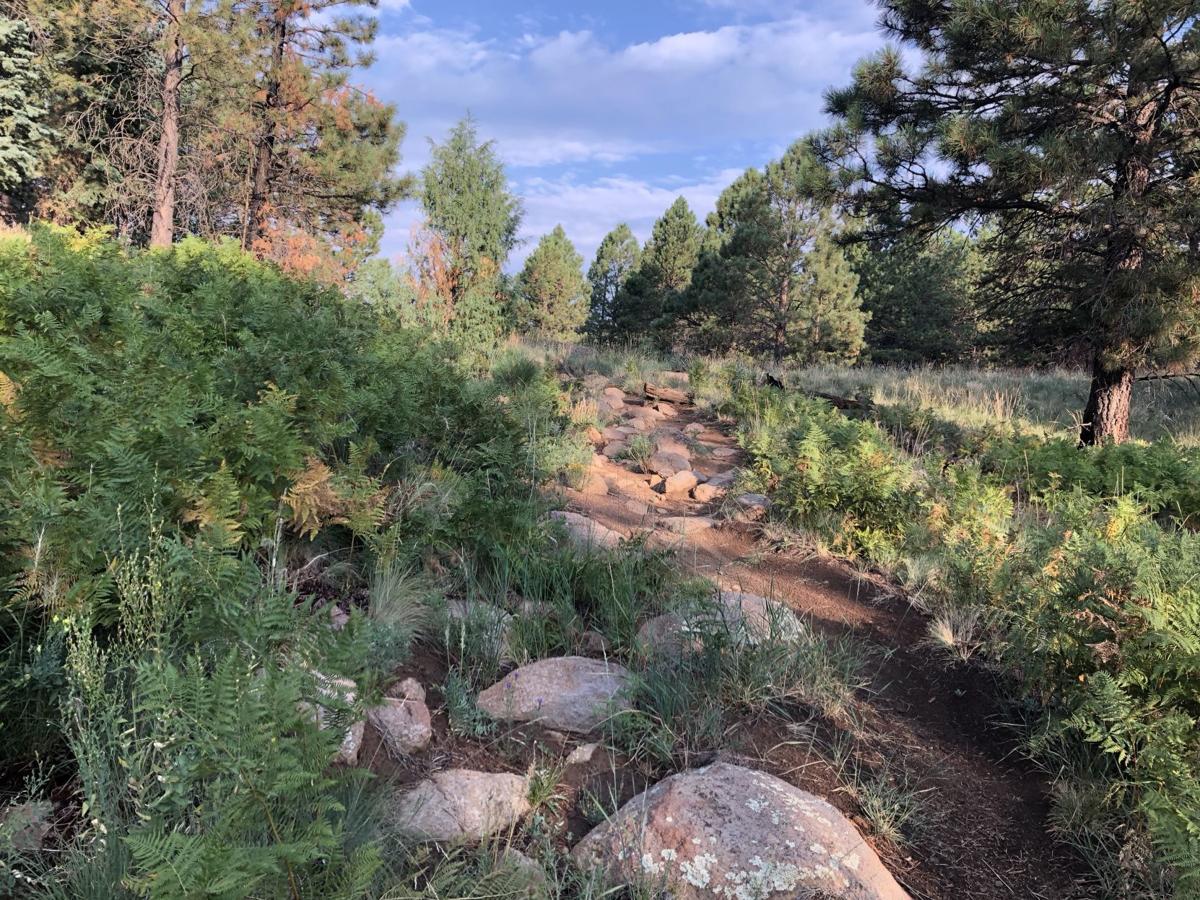 After the mile-long climb up the burn scarred Brookbank Trail, you are rewarded with a verdant open meadow atop the Dry Lake Hills untouched by the 2019 Museum Fire. 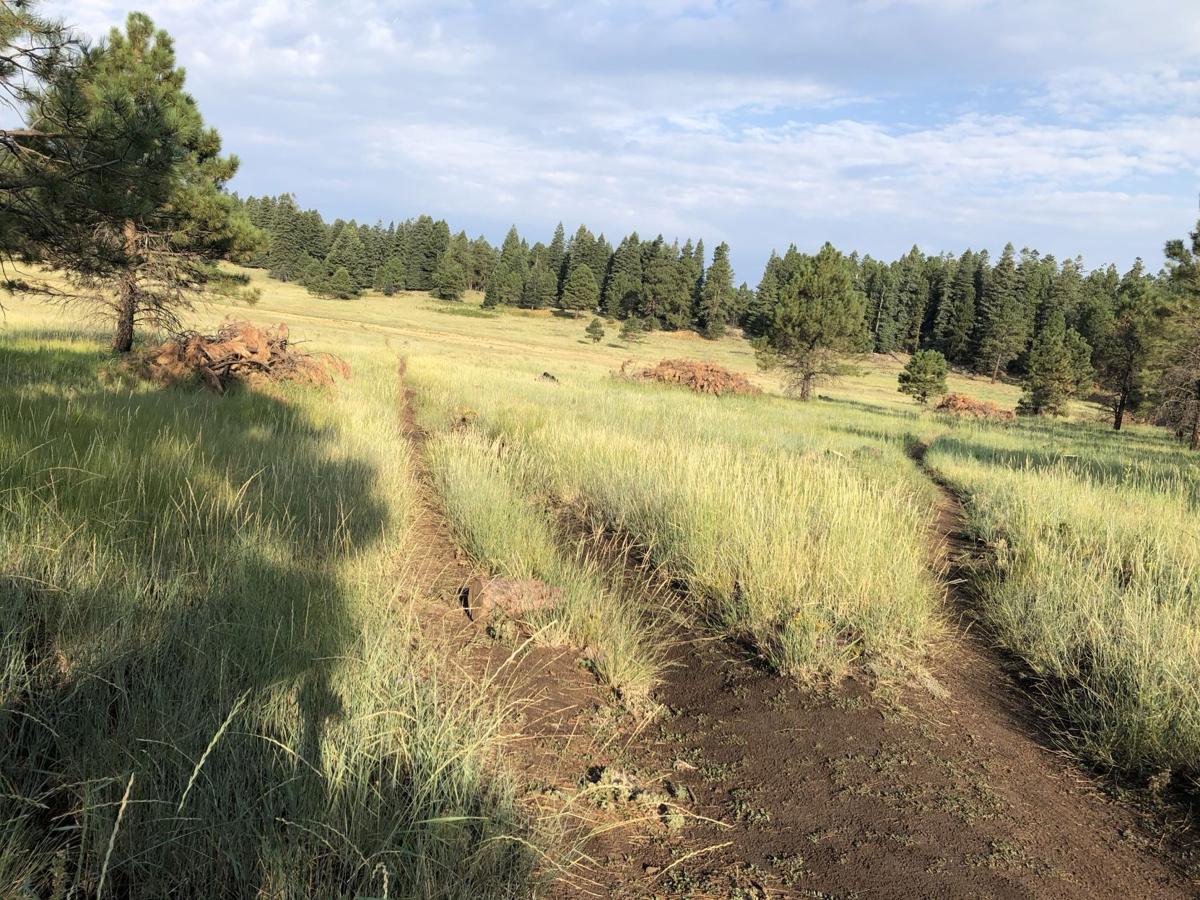 The unsigned Little Gnarly Trail veers to the right after the Brookbank Trail ends atop the Dry Lake Hills. To the left leads to many unmarked "social trails" that cannot be found on "official" maps. 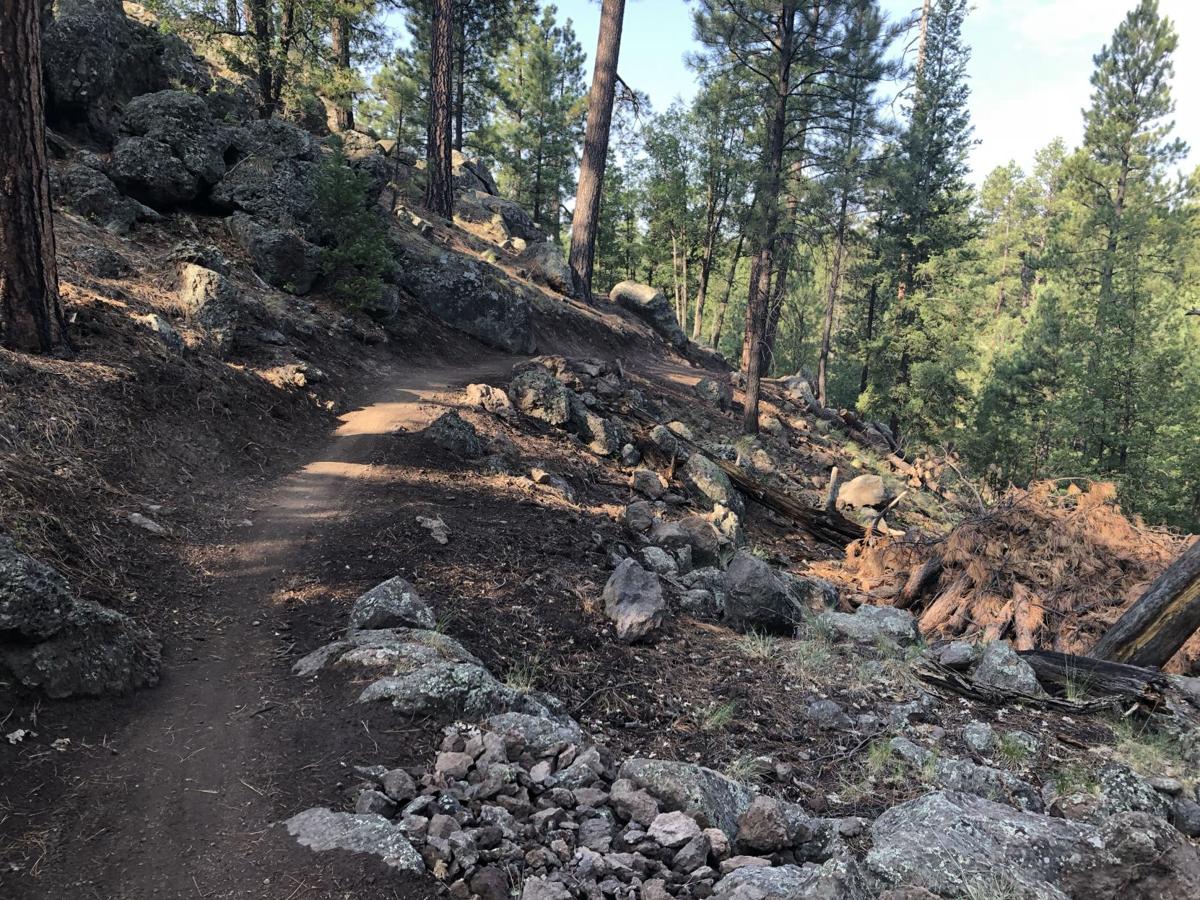 Near the end of the 9-mile loop, you come upon the realigned portion of the popular Schultz Creek Trail, which now leads to an up-and-down trip on a slight rise and eliminates the creek crossings deemed harmful to the environment.

A year ago, as the Museum Fire raged, people justifiably fretted about the fate of nearby homes, the delicate environment and the habitat in the ruefully, and accurately, named Dry Lake Hills area of Flagstaff.

Avid trail users, of course, also worried about the fate, and state, of many of the beloved routes that both ring and bisect the Dry Lake Hills. In fact, the fire that scorched more than 2,000 acres hadn’t even been close to contained when a Reddit thread was started so people could mourn what they figured was the loss of such established trails as Brookbank and Rocky Ridge and those colorfully-named “social trails,” such as Ginger, Lost Burrito and Pickle.

Once the ash settled and officials could adequately assess the loss, it was determined that 8.75 miles of Forest System trails were burned, 2 miles of which were damaged to “moderate or high severity through steep terrain,” according to a Forest Service-issued Mt. Elden/Dry Lake Hills Recreation Planning Project report.

All of the Brookbank Trail, which serves as a main thoroughfare in climbing to the top of the Dry Lake Hills, was closed in the fire’s wake. Much of the Rocky Ridge Trail, too, was off-limits because of the damage. As summer turned to fall and then fall to winter, these popular routes sat idle, though crews were diligently working to clear debris and make the paths safe for human traffic.

Eventually, the Rocky Ridge was reopened, in full, though the swath that borders Elden Lookout Road looked depressingly barren and charred.

When, however, would the Brookbank be deemed safe enough to allow for use? Some feared that it might take years, like the long delay before the Little Bear Trail reopened after the 2010 Schultz Fire or just the few months that the Abineau Trail was out of commission after the 2005 avalanche in the canyon.

Happy to report, though, that the Brookbank reopened in August, slightly more than a year after the Museum Fire. Now that all the closures to the Dry Lake Hills area have been lifted, trail users can once more circumnavigate the hills using the 3-mile Rocky Ridge, the first mile of Brookbank, the 1.3-mile Little Gnarly Trail connector and then cruise down the 4.5 mile Schultz Creek Trail for about a 9-mile loop.

Along the way, you can engage in a sobering form of “disaster tourism,” gawking at the downed trees that resemble charcoal briquettes and singed foliage on the Rocky Ridge. But the devastation is really in evidence on Brookbank.

You notice it upon entering after crossing Elden Lookout Road. The green of the wild grasses that sprouted in spring and summer clashes mightily with the rust-colored and desiccated husks of ponderosa pines. But it gets more severe the farther you go. As the Brookbank climbs, charred logs litter the area on both sides of the path. What once was a fairly dense, tree-lined path has been partially denuded — improving the view, but at what cost?

Spirits rise as you rise farther on the trail, to the high point of 8,345 feet. There, the meadow remains intact, preciously verdant and lush. It is as if you’ve emerged from a black-and-white movie into Technicolor. It is breathtaking.

Or maybe it’s just the Brookbank climb that makes you gasp. Because Brookbank’s been closed for more than a year, you might forget that the trail is mega-steep — 621 feet in a single mile.

Once the Brookbank ends — you can, however, veer right onto the Upper Brookbank Trail leading about two more miles to the Sunset Trail, if you crave more climbing — it’s pretty much a downhill jaunt from there. You want to veer right at the forked trail in the meadow to meet up with Little Gnarly, which goes from singletrack to unmarked logging road on its descent to the Schultz Creek Trail, just before it intersect with the Sunset Trailhead.

One other note about the fire damage: Several of the unofficial “social trails” cultivated by mountain bikers have fared poorly. The unmarked Ginger Trail, a bombing downhill that ends at the Rocky Ridge Trail seems to be relatively intact, by cursory inspection. But the unmarked Pickle Trail that serves as something of a shortcut between the Rocky Ridge and Brookbank Trails is barely recognizable — at least from the Brookbank vantage point.

Most hikers and runners won’t be using Ginger or Pickle, anyway. They are best left to mountain bikers. It’s the resumption of the Brookbank that is to be celebrated, because it once again closes the loop.

There is one other surprise when traversing the loop, and it comes on the well-traveled Schultz Creek Trail. In the final mile coming south, downhill, you’ll notice that the trail has been realigned. No longer do you veer west and swing south through the dusty banks of the creek before finishing up with a flat stretch that parallels the creek.

The Forest Service spent the summer realigning the start (or finish) at the dirt lot off Schultz Pass Road. Rather than starting flat and straight from the lot, you veer right in the direction of the Rocky Ridge Trailhead before veering left on gentle, swerving climbs before hooking up with the established Schultz Creek route.

Brady Smith, Forest Service spokesman, said the realignment is the culmination of a project first identified in the 2004 Arizona Trail-Peaks Segment Environmental Assessment.

“The desired condition is to have the trail out of the creek bed and minimize the number of crossings,” Smith said.

In short, it adds a new twist to an old trail. And with the Brookbank back open, that old familiar 9-mile loop seems brand new.

The Route: From the realigned trailhead, follow the signs for the Schultz Creek Trail and Rocky Ridge heading west. After barely 0.1 of a mile, the trail splits. Go right (south and east) on the Rocky Ridge Trail for 3 miles until it ends at the intersection of Elden Lookout Road and the Lower Oldham Trail. Follow the signs to the Brookbank Trail. Cross Elden Lookout Road and join the Brookbank Trail for 1 mile. When you reach a meadow at the top, bear right (north) on a forked path, the unsigned Little Gnarly Trail. Take that road down to the Schultz Creek Trail. Follow that more than 4 miles back to the trailhead.

The charred remains of ponderosa pines from the 2019 Museum Fire are strewn throughout the climb up the Brookbank Trail, which recently reopened for use.

Making the turn onto the newly reopened Brookbank Trail, you can see the devastation wrought from the 2019 Museum Fire. Trees are scorched and dying, but still standing.

After the mile-long climb up the burn scarred Brookbank Trail, you are rewarded with a verdant open meadow atop the Dry Lake Hills untouched by the 2019 Museum Fire.

The unsigned Little Gnarly Trail veers to the right after the Brookbank Trail ends atop the Dry Lake Hills. To the left leads to many unmarked "social trails" that cannot be found on "official" maps.

Near the end of the 9-mile loop, you come upon the realigned portion of the popular Schultz Creek Trail, which now leads to an up-and-down trip on a slight rise and eliminates the creek crossings deemed harmful to the environment.