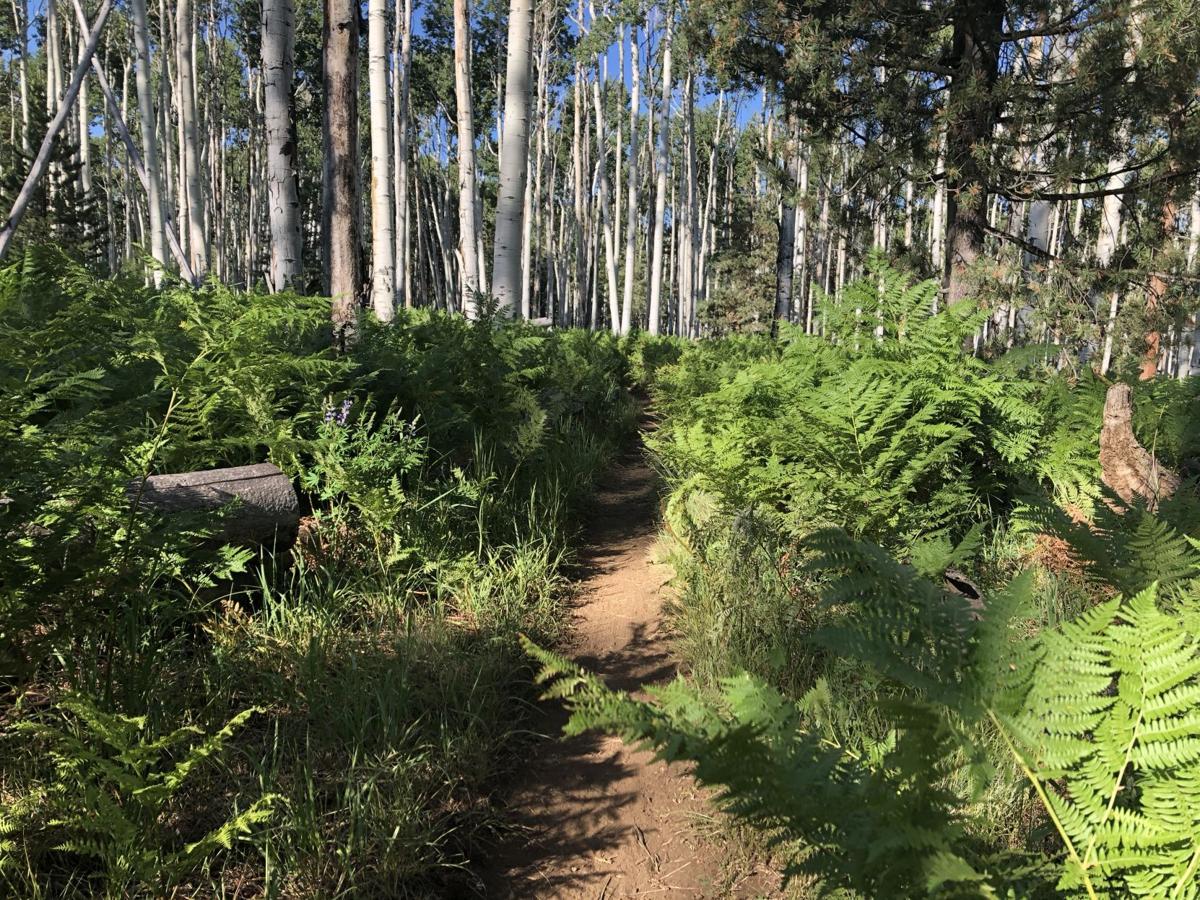 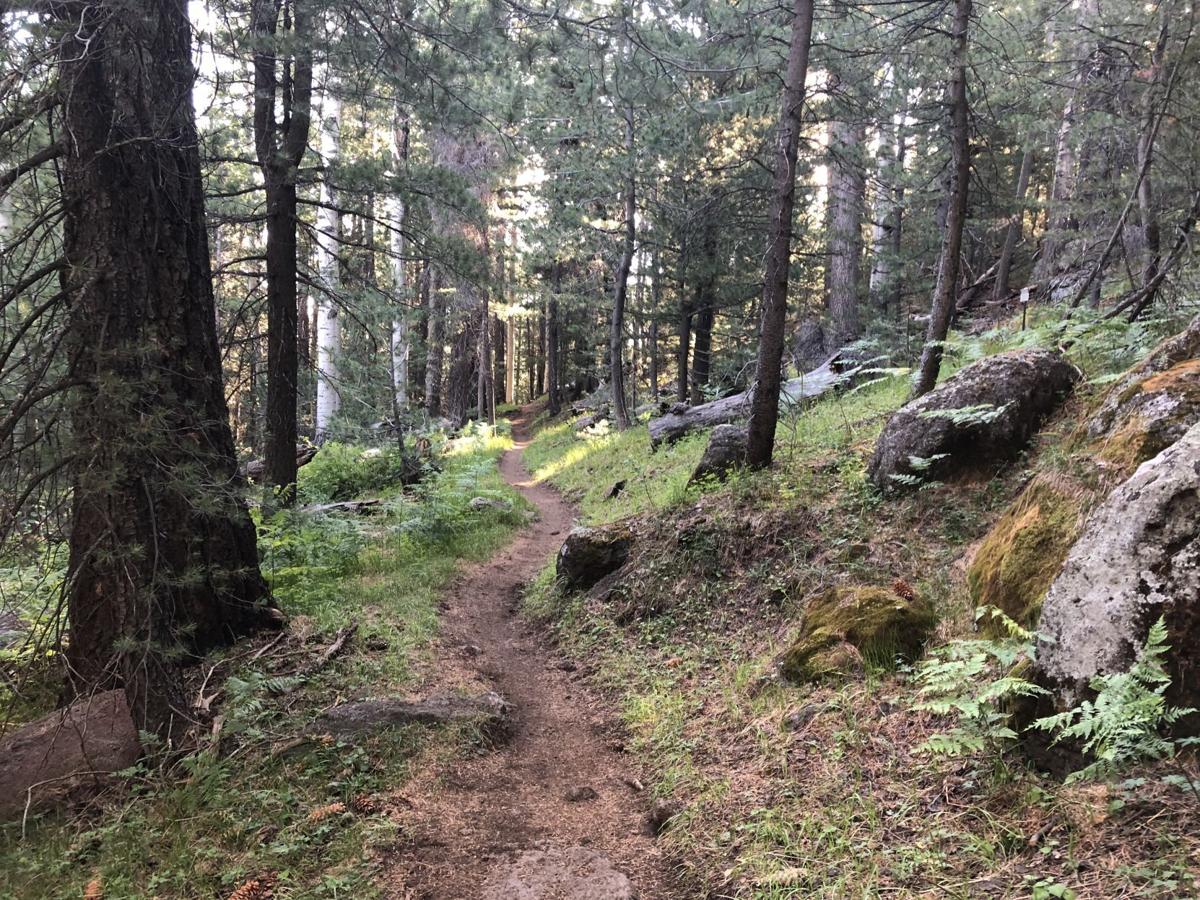 Mountain bikers find the mostly downhill stretch of the Arizona Trail, from Bismarck Lake to FR 418 a thrill ride amid the pines and aspens. 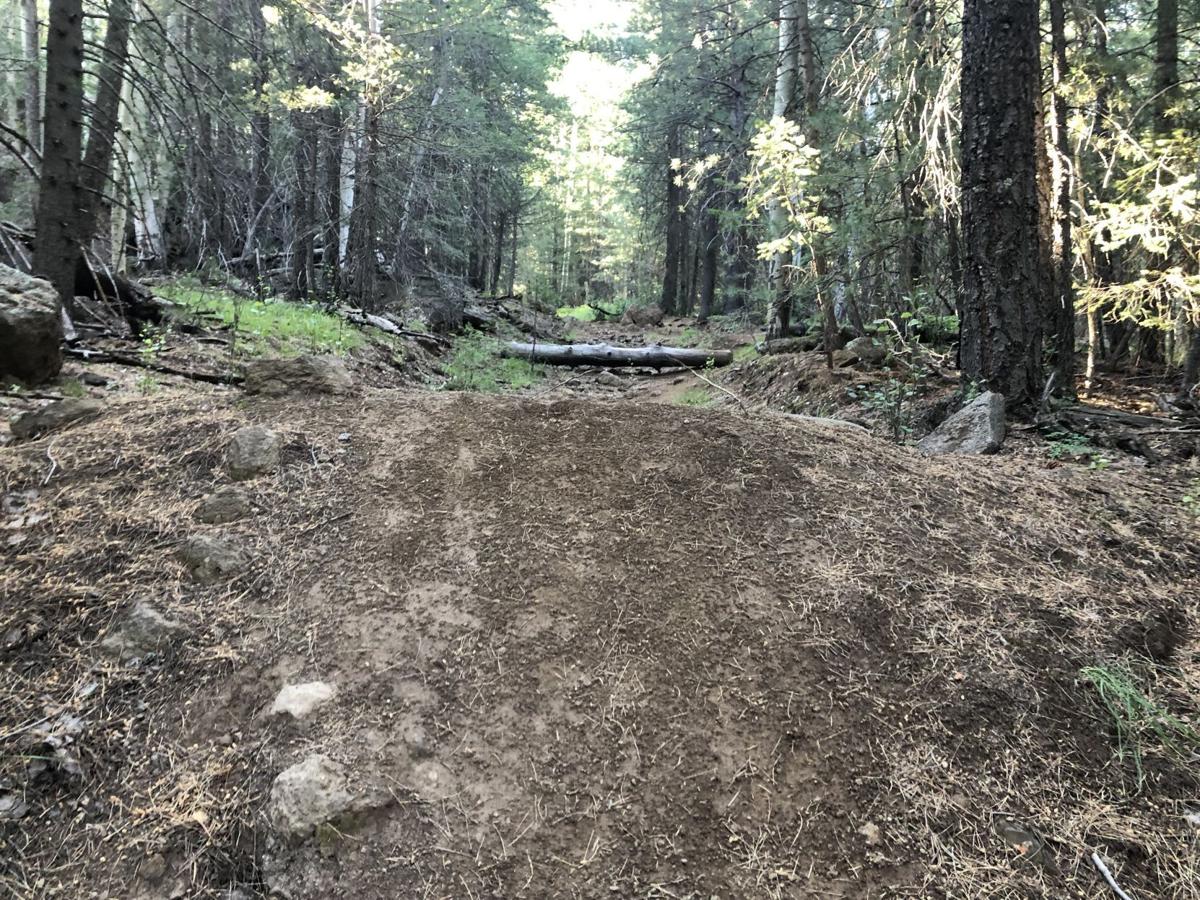 The Bismarck Lake Trail has been contoured by mountain bikers to add some spice and undulations to what is a steady 1.1-mile uphill trek. 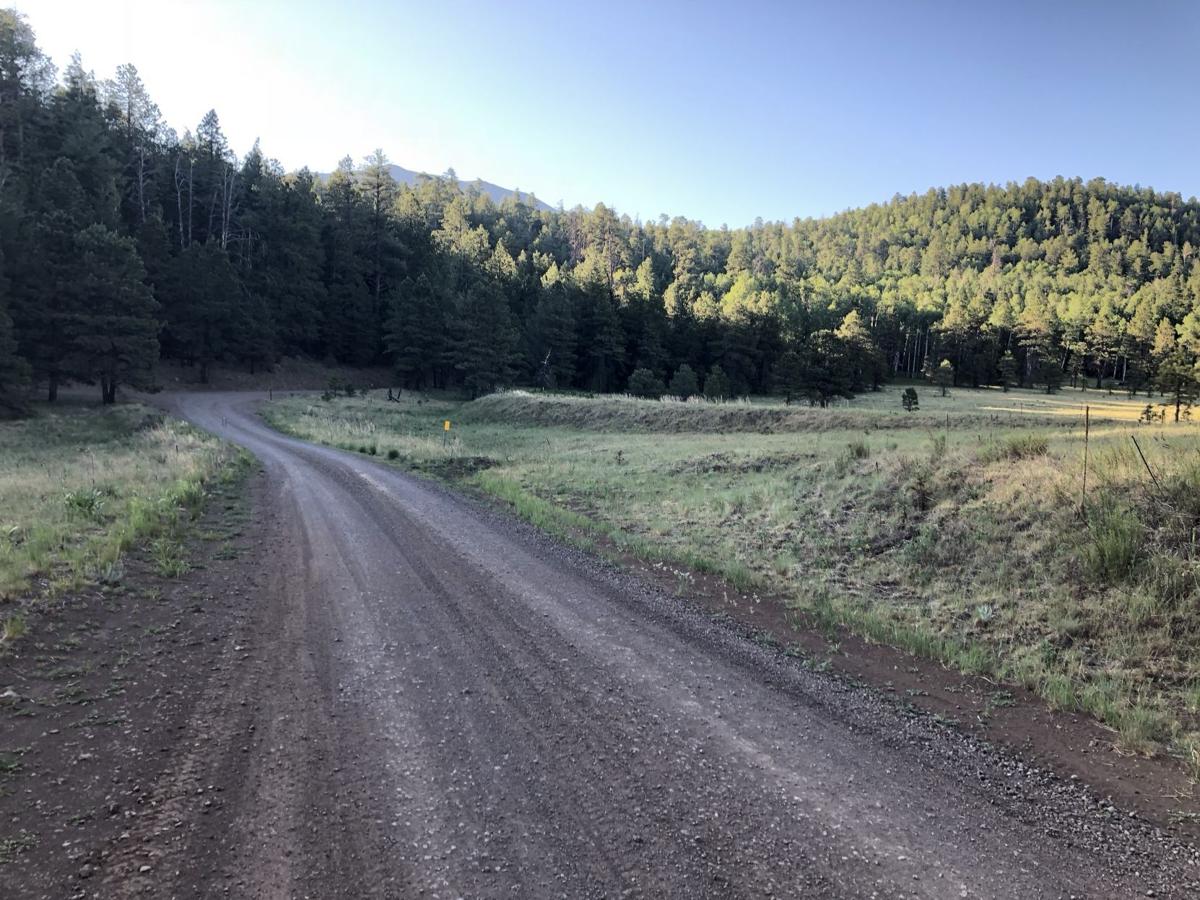 Hart Prairie Road (FR 151) between Bismarck Lake and FR 418, is flanked by open meadows and stands of Ponderosa pines. 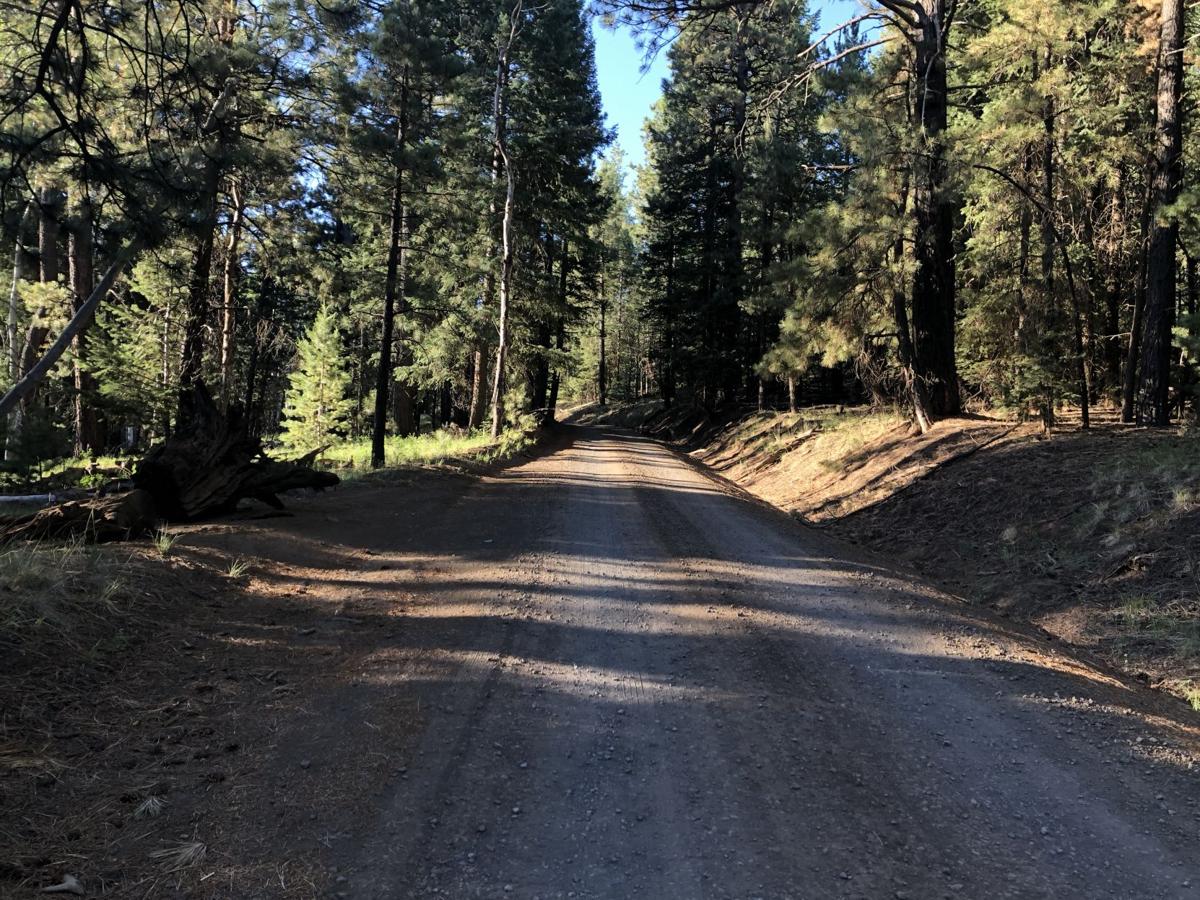 Not all of the Hart Prairie Road, aka, FR 151, is lush meadows with tall grasses. There is plenty of shade thanks to pines and aspen lining the path. 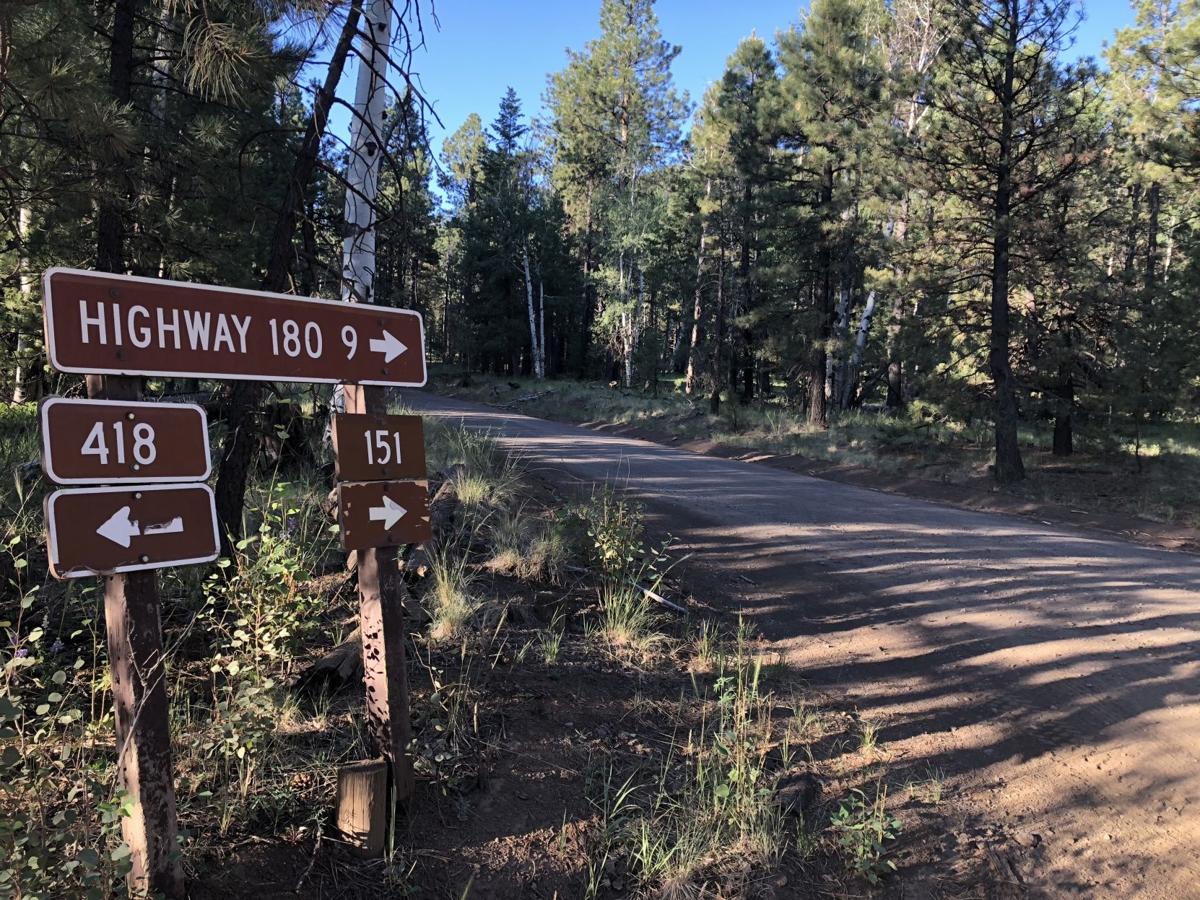 The start of the 8.5-mile Hart Prairie/Bismarck Lake/AZT loop is at the intersection of FR 418 and Hart Prairie, aka FR 151.

Going on fire roads sure would be more enjoyable, and certainly less monotonous, if they were all as spectacular as Hart Prairie Road, aka FR 151, running west of the San Francisco Peaks.

Hart Prairie, especially the two-mile stretch between FR 418 and FR 627 (the turnoff for the Bismarck Lake Trail), almost doesn’t seem like your standard, dusty and utilitarian fire road — simply a means to get from one camping spot or trailhead to another.

No, there are stately ponderosa pines and aspen glades galore, with the Hochderffer hills looming to the west and, peeking between tree branches to the right, the silhouette of the Peaks. Granted, that stretch of Hart Prairie is all uphill heading south from the junction of 151 and 418 — and, truth be told, the next 1 ½ miles on the Bismarck Lake Trail also is uphill. But by the time you reach the Arizona Trail junction, heading north back to 418, it’s a long, winding descent that makes you forget the previous climbing.

It’s not as if people don’t know Hart Prairie Road, the 14-mile stretch between its two turnoffs from Highway 180 (to the south, just near the Wing Mountain turnoff; to the north, a little past the Nordic Village). Mountain bikers frequent the dirt and gravel road, and tourists in SUVs traverse the stretch as part of the longer loop around the mountain.

Oh, and in the fall, this is a prime aspen leaf-peeping destination.

Given its popularity, and given my near-pathological aversion to crowds (especially in these days of social distancing), you’d think I’d want to steer clear of Hart Prairie. Leave the road to the masses, as it were.

But because it’s an iconic swath of dirt road — historic, too — I felt an obligation to hoof it over there. And because out-and-back routes are anathema to me (another pathology), a quick consultation with the trusty Emmitt Barks Cartography trail map gave me what looked to be a reasonably easy and certainly beautiful 8.5-mile loop that included Bismarck and the AZT before taking FR 418 back to the intersection.

A bonus in visiting Hart Prairie is its sense of history. Back in the day — way back; we’re talking the 1890s — the Moqui Stagecoaches, top-of-the-line, six-horse-powered buggies, shuttled visitors the 92 miles from Flagstaff to the Grand Canyon. It was a 12-hour trip that cost travelers $20 (equivalent to $500 today). In 1897, perhaps thumbing their noses at the rich folk riding in style, the newly formed Coconino Cycling Club challenged the stagecoach to a race. The hardcore dudes of single-speed bikes made it in 10 hours, easily leaving Moqui in their dust.

Ever since then, cyclists have sort of claimed their road as their own.

This being a warm Sunday morning in mid-July, I had girded myself for some traffic on the route, particularly the Hart Prairie segment. But I was willing to put up with plumes of dust enveloping me (yet another pathological fear) thanks to pickup truck barreling by, because I knew the AZT segment was something special.

Strangely, though, I encountered nary a single motorized vehicle on the two miles of Hart Prairie. I ran down the middle of the path, the flattest part, heedless of getting run off the road. In fact, the first signs of life I saw didn’t come until I had made the left-hand turn onto FR 627, a half-mile stretch that leads to the Bismarck Lake trailhead.

There, I saw a few car campers parked at a discreet distance from the road, shrouded by pines. They were late risers, apparently; no one stirred from a tent or camper. That prolonged the feeling (false sense?) that I was alone in the middle of nowhere in an earlier historical period, before even the Moqui Stagecoach line had its day.

Making the transition from FR 627 to the Bismarck Trail, proper, I could see physical evidence of the mountain bikers’ influence. They had transformed what had been a straight, rising singletrack into something of a mogul, crafting undulating hills. I know we’re supposed to frown upon such non-natural changes to the landscape but — dare to say — it was fun traversing the up-and-down terrain.

About a mile into the Bismarck Trail, the stands of pines, firs and aspens recede and you enter a meadow of tall grasses with unobstructed views of the Peaks straight ahead. Feel free to make the brief turnoff to check out the lake itself. There’s not much to see, frankly. On this morning, it was a dry as a businessman’s Power Point presentation.

By the time you hit the junction with the AZT, you will have gained 726 of the 798 feet on the entire trip. Now comes the fun part. The next 4 miles was a long, gradual descent on a smooth singletrack that wends its way through shaded stands of pines and groves of aspen, with ferns growing hip-high. The shade was welcome because, by this time of morning, it was warming up.

I had gone nearly 2 miles on the AZT and still had not encountered another runner, hiker or mountain biker. It was nice, though a little unsettling. Where was everybody?

Well, I didn’t have to wait long. On a squiggly descent around several blind corners, I heard a tell-tale tinkling of a mountain-bike bell from behind. Good thing I immediately moved to the far right edge of the singletrack, because a mountain biker whooshed past me on this downhill, going what had to be 30 mph. Close behind him were two spotted cattle dogs, sprinting, and desperately trying to keep up. In a flash, all were gone.

Now, some might be annoyed at the rapidity of the biker’s swift descent, but he did ring a bell for advanced notice so I could step off. And the guy, and his dogs, just seemed to be having so much fun, I'm going to let any safety lecture slide.

Reaching FR 418 for a 1.2-mile trip back to the start, I began to see more activity. The day — and the area — was heating up. A careening Jeep blew a cloud of dust in my face on 418. I just shrugged. The rest of the loop was so pleasant that I could easily endure one or two hardships along the way.

Driving Directions: From downtown Flagstaff, take Fort Valley Road/Highway 180 north for about 17 miles, beyond the Nordic Village Center. Turn right on FR 151 (before getting to the Kendrick Park Wildlife Trail). Go 1.2 miles to the signed intersection of FR 151 and FR 418. Pullout dirt parking is to the north.

We are looking for reader responses for an upcoming story on trail etiquette: how to be a responsible user on Flagstaff’s many forest and urban trails. What is the most common trail faux pas you have witnessed? Dogs off-leash? Runners or mountain bikers going at unsafe speeds on singletrack? Hikers wearing headphones and unaware of their surroundings? Quad users exceeding the speed limit. Horses leaving “deposits” on the path?

Tell us your pet peeves and also let us know of any trail altruism and good etiquette you’ve seen. Email your thoughts to reporter Sam McManis at smcmanis@azdailysun.com.

There’s a lit fireplace in the corner, but its crackle cannot be heard over the buoyant patter of friendly conversation. At the door, a man we…

Mountain bikers find the mostly downhill stretch of the Arizona Trail, from Bismarck Lake to FR 418 a thrill ride amid the pines and aspens.

The Bismarck Lake Trail has been contoured by mountain bikers to add some spice and undulations to what is a steady 1.1-mile uphill trek.

Hart Prairie Road (FR 151) between Bismarck Lake and FR 418, is flanked by open meadows and stands of Ponderosa pines.

Not all of the Hart Prairie Road, aka, FR 151, is lush meadows with tall grasses. There is plenty of shade thanks to pines and aspen lining the path.

The start of the 8.5-mile Hart Prairie/Bismarck Lake/AZT loop is at the intersection of FR 418 and Hart Prairie, aka FR 151.