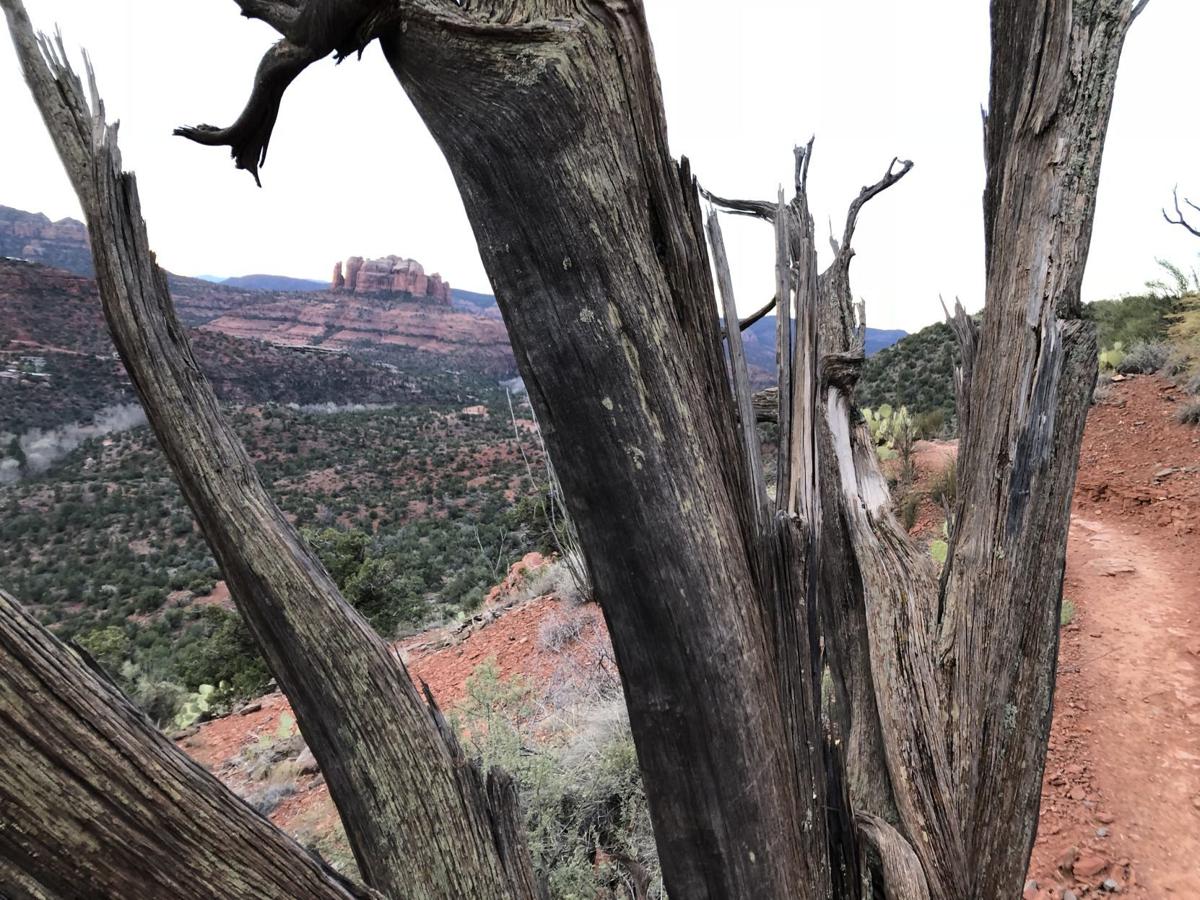 Views of Sedona's famous red-rock formations can be seen through the trees along the Airport Mesa Loop Trail. 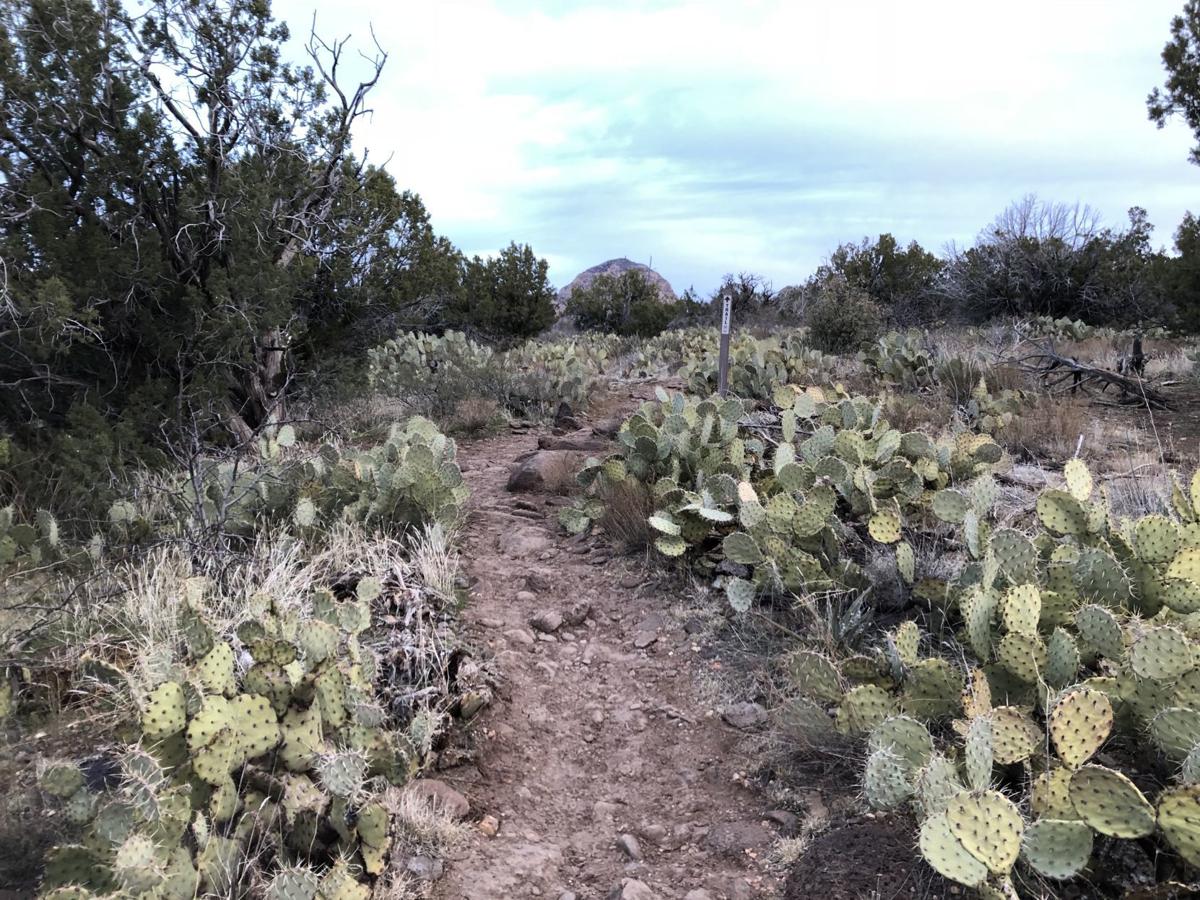 Be careful not to trip over the basalt boulders on this stretch of the Airport Mesa Loop trail; there are cacti aplenty. 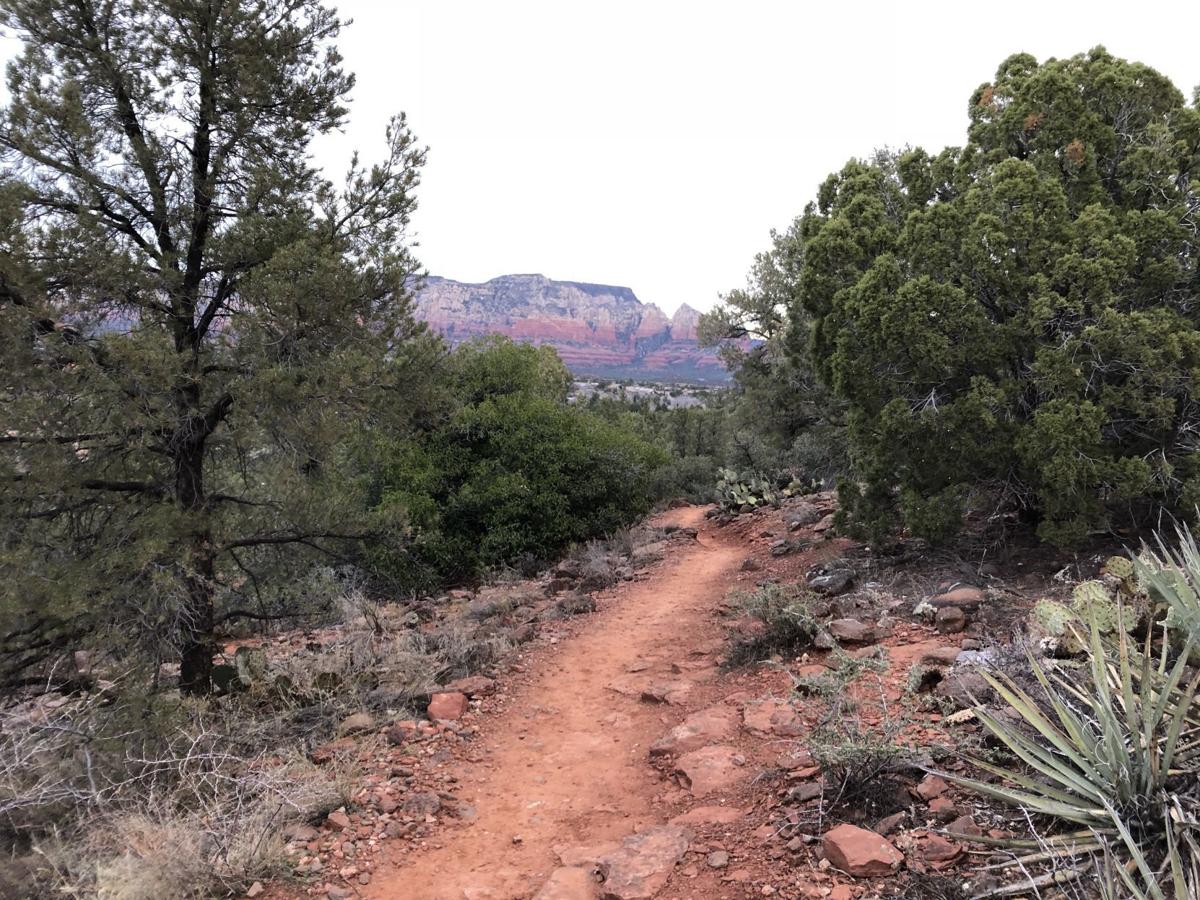 Distant views such as this is why the Airport Mesa Loop Trail in Sedona is so popular. 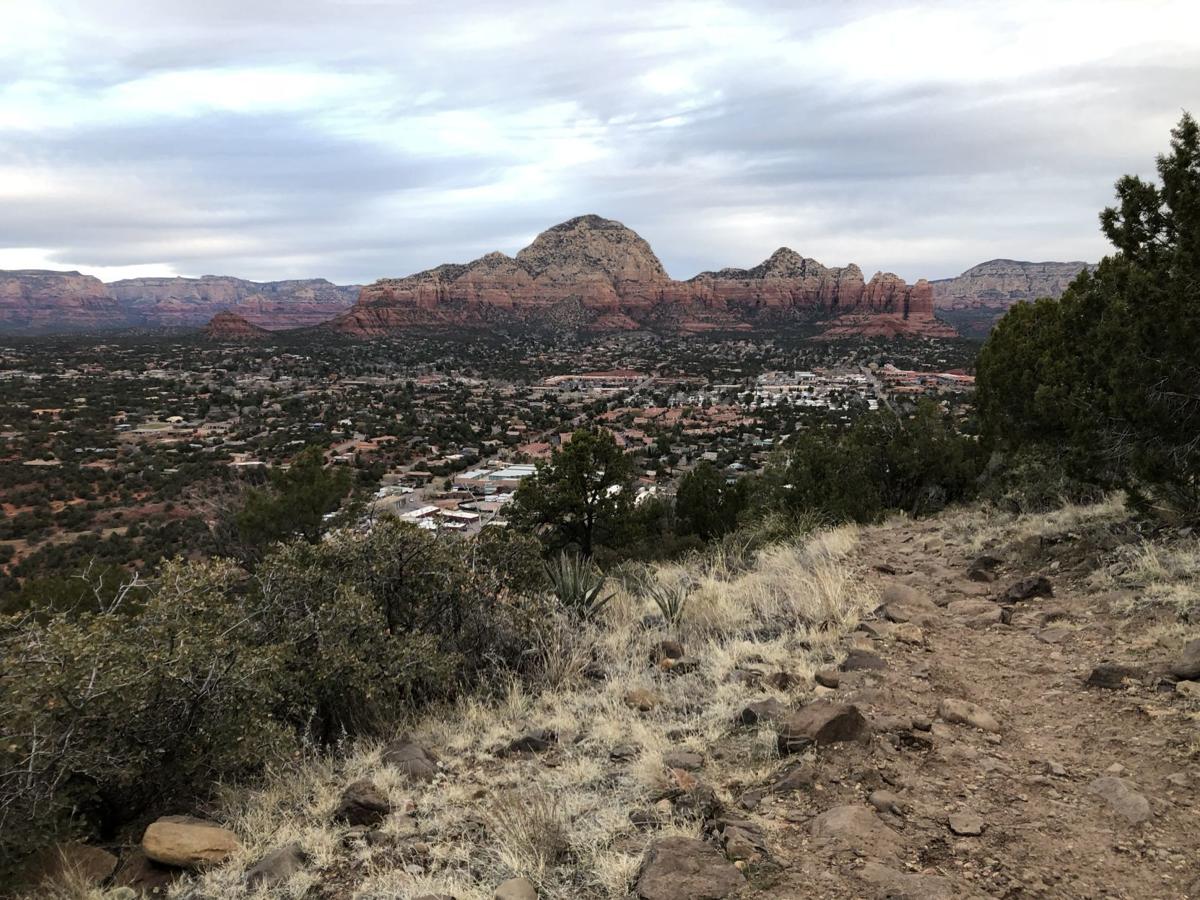 The southern portion of the Airport Mesa Loop Trail affords views of the Oak Creek valley and downtown Sedona. 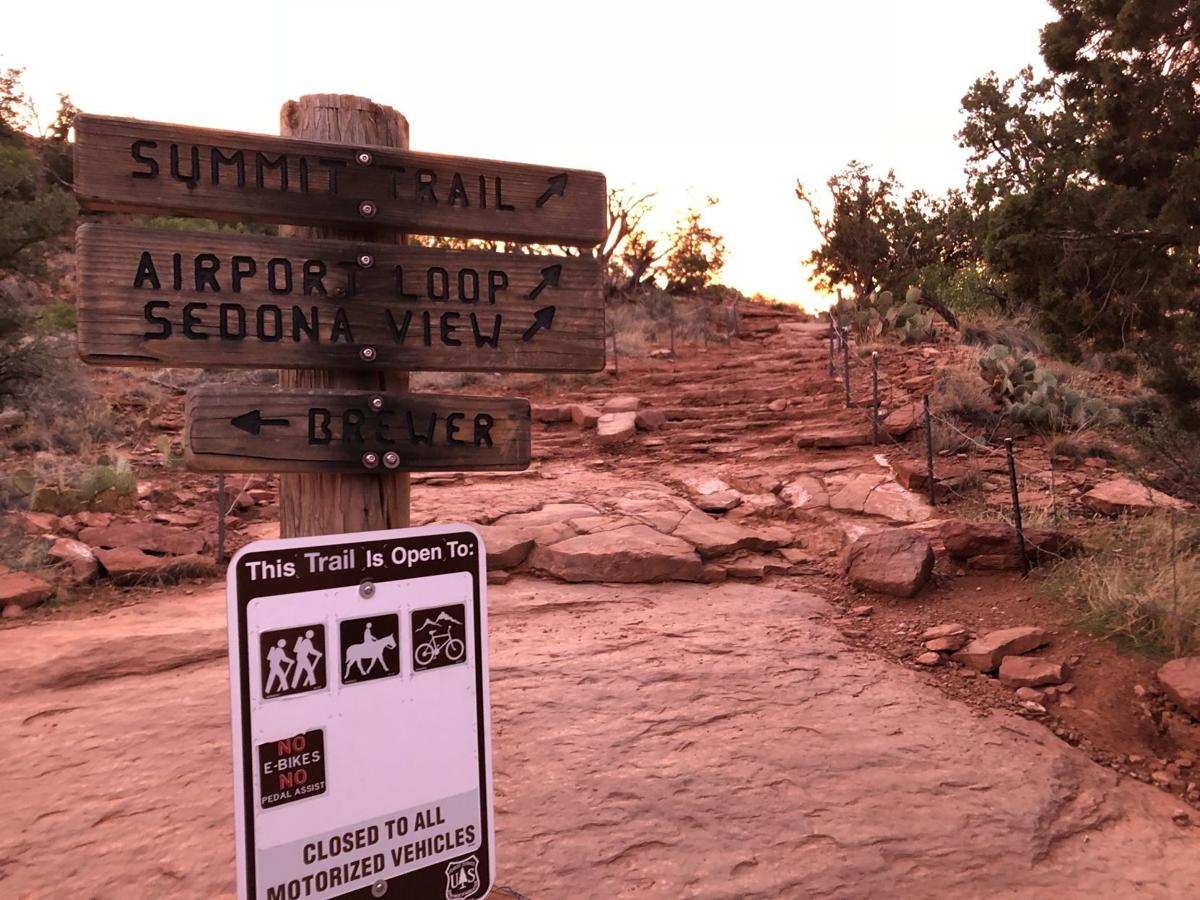 A quarter-mile above the traiilhead to the Airport Mesa Loop Trail is a vortex that draws New Age visitors from far and wide.

In case you haven’t noticed, Sedona trailhead parking lots fill up fast. That’s especially true at the popular hiking spots, usually those featuring a vortex — you know, those ethereal, astral, woo-woo places on red-rock bluffs said to have an otherworldly energy.

So I timed my trip to the Airport Mesa Trail Loop accordingly, choosing to visit before sunrise on a cold and blustery mid-December day. Surely, I thought, the 10-space parking lot at a soft shoulder heading toward the airport wouldn’t be full at that hour, right?

Only nine of the 10 spaces were occupied. Believe you me, I felt lucky to nab that last parking spot, which, unlike at many Sedona trailheads, did not require the purchase of a daily Red Rock Pass.

The thought that nine other parties already were on the 3.3-mile singletrack trail that encircles Table Top Mountain (and the airport) and provides visual highlights of many of Sedona’s most storied rock formations — Cathedral, Bell, Courthouse Butte, Elephant Rock — was disheartening. Crowds are not my thing but, then again, I should’ve known that before choosing such a popular trail.

It didn’t take long to realize that the early-bird crowd was not interested in the trail. At the trailhead, I craned my neck skyward and, atop the mini-mesa where the vortex’s powerful vibes are said to emanate, I saw a gaggle of people gathered. I couldn’t tell precisely what they were doing up there — the sun had yet to rise, so they mostly were in silhouette — but I’m sure they channeling some deep spiritual energy that a cynical clod like me is too jaded to appreciate.

Needless to say, I gave those folks a wide berth.

But I really did want to give this vortex experience a go. A month earlier, I ran up to the vortex in Boynton Canyon and felt … nothing. No great celestial bolt of energy, no deep insight into the human condition and man’s place in the universe. Nada. Perhaps the problem was me. So, after loping the 3.3-mile loop, I planned to give it a shot — provided the private ceremony had concluded.

First, though, the trail.

Some call it the most popular in Sedona, and I don’t doubt them. The reason for its popular is three-fold: (1) It’s centrally located in town; (2) it’s a short jaunt, compared to many lengthy Sedona sojourns; and (3) it gives an overview of much of the natural eye candy for which Sedona is known, without putting in too much effort to get up close and personal with the red rocks.

In short, it’s a great trail to show Aunt Edna and Uncle Hal when they visit from Kansas. For the rest of use, it’s a pleasant workout for when we don’t have all day to go deep into the red-rock backcountry.

Knowing the Airport Mesa Trail’s reputation, I was a tad taken aback when several maps attached the black diamond icon next to it (“difficult”). There’s not a ton of elevation gain, slightly more than 400 feet over 3.3 miles.

But as I would find a third of the way into my journey — I chose the more popular “clockwise route” from the trailhead, rather than cross the road and do it backward — there’s a mile-long stretch where it’s rocky and somewhat steep. But mostly it’s the rocks, some boulder-sized, that slow you down.

You are lulled into a false sense of ease from the start, as you breeze over the slickrock and loose soil. The only hazard is that it’s a singletrack path and there’s a drop-off, so take heed and occasionally look down so as not to trip. Regardless, you are able to fully appreciate the distant views of the formations ringing Oak Creek valley.

As you wend your way around the mountain, the views in the distance change. More red bluffs, more postcard vistas. But you also start to see the housing and commercial developments ringing the valley below, kind of a buzzkill for hardcore back-to-nature types. Still, beautiful.

Heading south in the second mile, the basalt boulders get bigger and so does the climb. Near the top of the mesa, you encounter a rock-strewn cactus garden. Of course, this was the area at which I fell (at least once a run, I’m required to take a tumble). Six inches were all the separated me from a nasty looking prickly pear.

The good thing about this section is that, even though you are close to the airport runway, you neither see nor hear planes taking off — at least not early on a weekday morning. There’s just a chain-linked fence that runs parallel to the trail, but that recedes soon enough.

A long, though rocky, descent begins in third mile. Best here to keep looking down. You may miss the sights of West Sedona — I could’ve done without the panoramic view of the U-Haul facility — but the trail can get technical, especially after a rain. The final segment parallels Airport Road and goes uphill, with glimpses of the mini-mesa where the vortex beckons.

When I reached the trailhead, to my mild surprise, my car was the only one left in the lot. The vortex voyeurs had scrammed, and I felt safe to ascend and seek illumination.

Alas, nothing. Again. I’m 0 for 2 now when it comes to getting a buzz out of Sedona’s famous vortexes. It’s not them, it’s me.

Directions: From Flagstaff, drive south 22 miles on Highway 89A. After two roundabouts, continue on 89A and make a left on Airport Road. Travel slightly less than half a mile and a dirt parking lot will be on the left. There is no fee.

The Route: The more popular route is to go clockwise. From the parking lot, follow the directional signs to the "loop" trail, heading north. The path circles Table Top Mountain. There are two side trails to add distance, Table Top and Bandit Trails. The loop ends at Airport Road, a few feet from the parking lot.

Views of Sedona's famous red-rock formations can be seen through the trees along the Airport Mesa Loop Trail.

Be careful not to trip over the basalt boulders on this stretch of the Airport Mesa Loop trail; there are cacti aplenty.

Distant views such as this is why the Airport Mesa Loop Trail in Sedona is so popular.

The southern portion of the Airport Mesa Loop Trail affords views of the Oak Creek valley and downtown Sedona.

A quarter-mile above the traiilhead to the Airport Mesa Loop Trail is a vortex that draws New Age visitors from far and wide.