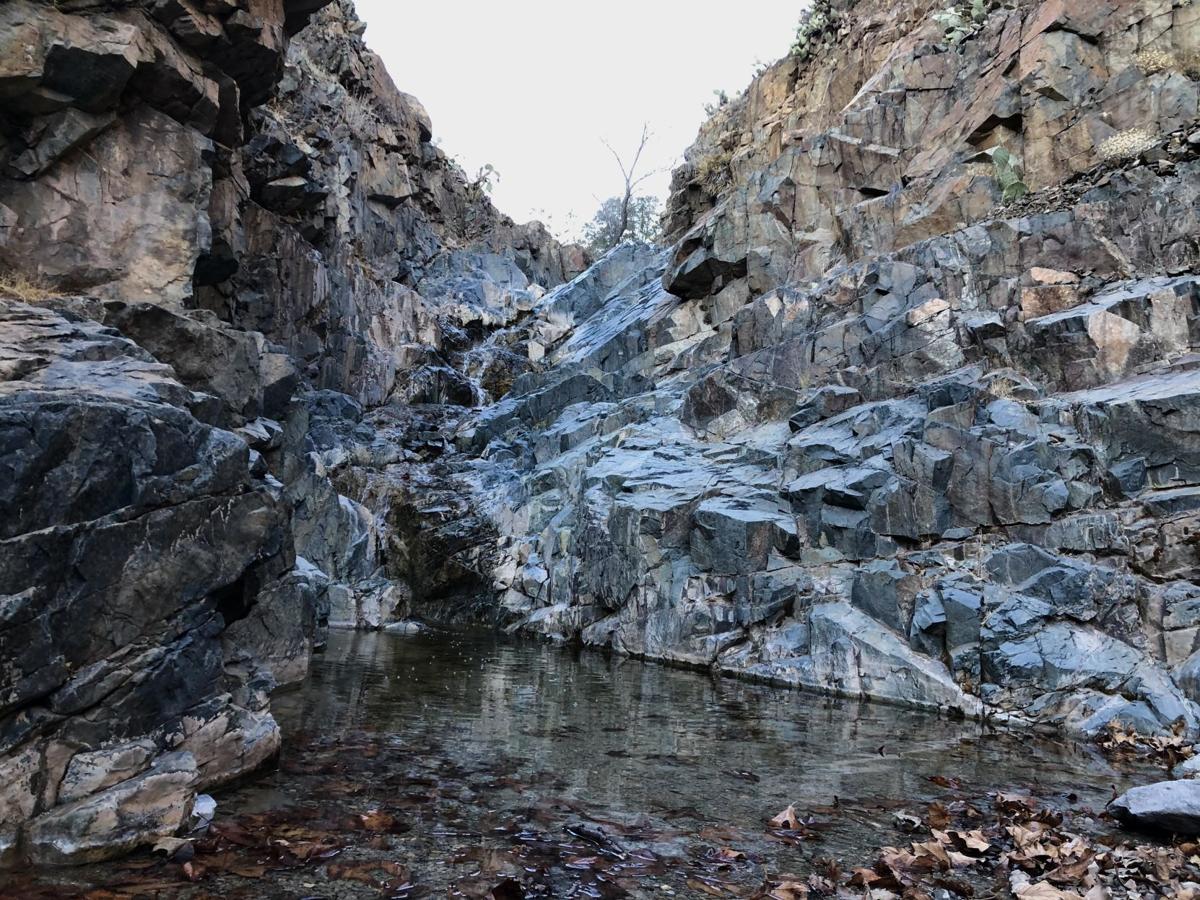 The seasonal Copper Fall, nestled into a hillside between Camp Verde and Interstate 17, is only a short detour away when completing the Copper Canyon Loop. 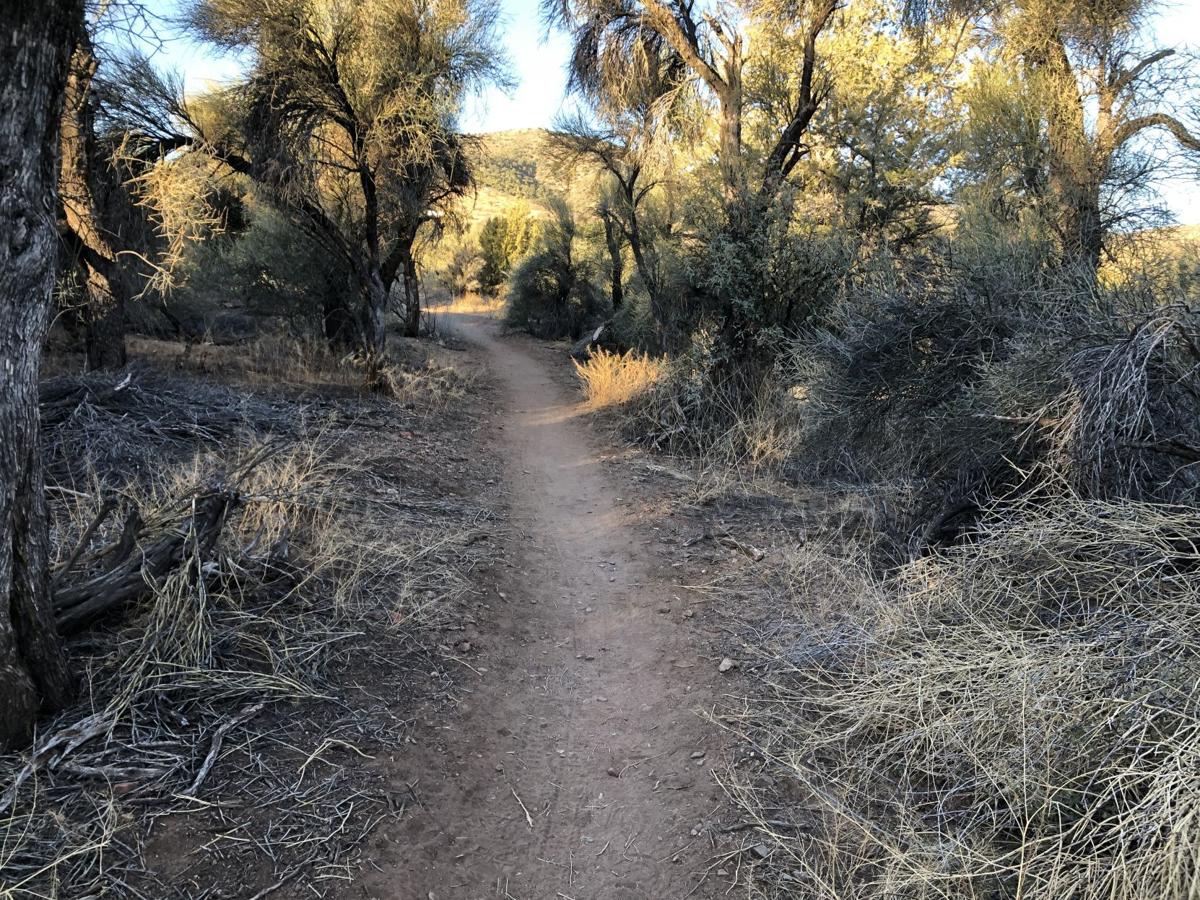 The Copper Canyon Loop has a variety of trees and shrubs, including the spiny crucifixion-thorn bushes, which can grow to 10 feet in height. 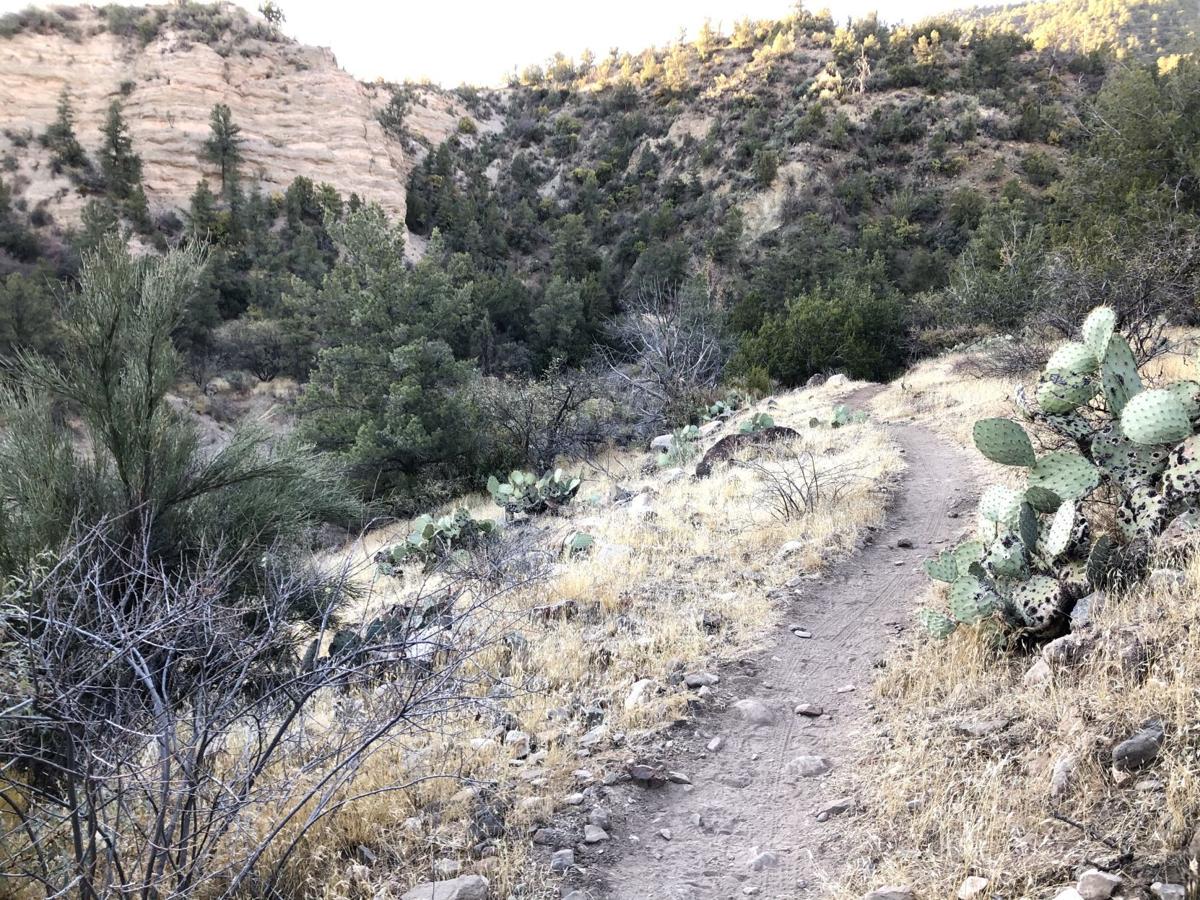 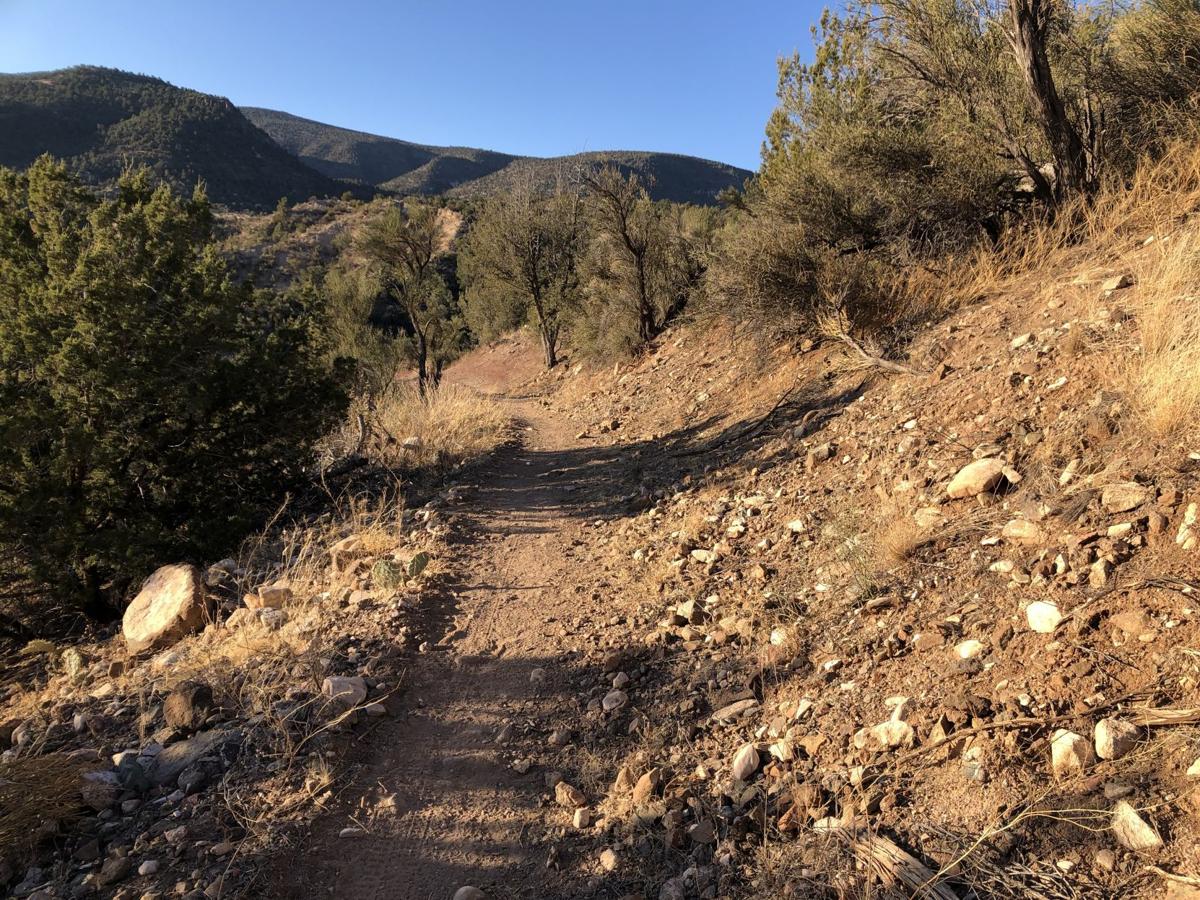 The path is smooth throughout the 4.1-mil Copper Canyon Loop, making it popular with all types of trail users except for motorized vehicles, which are prohibited. 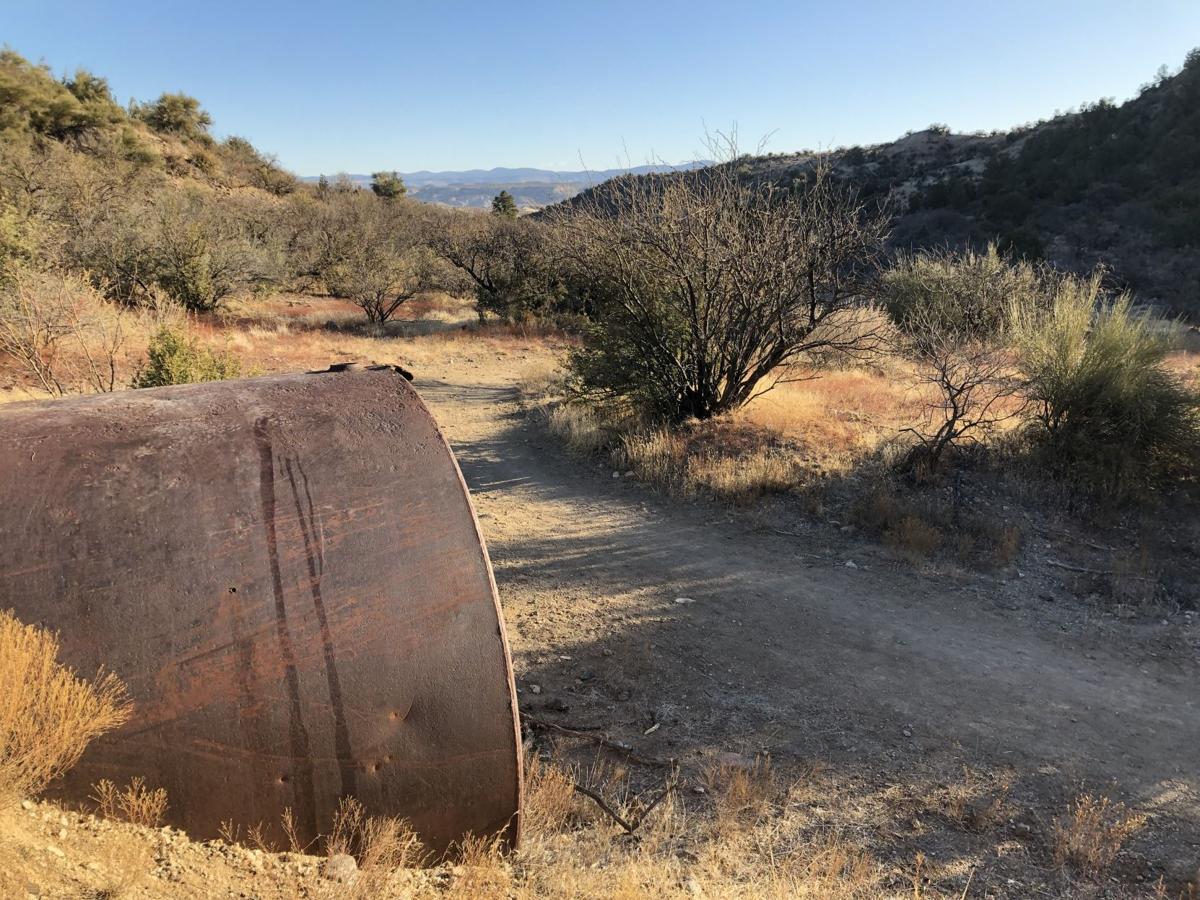 Off the ridge, near the end of the Copper Canyon Loop, the terrain becomes more like desert, complete with a water tank. 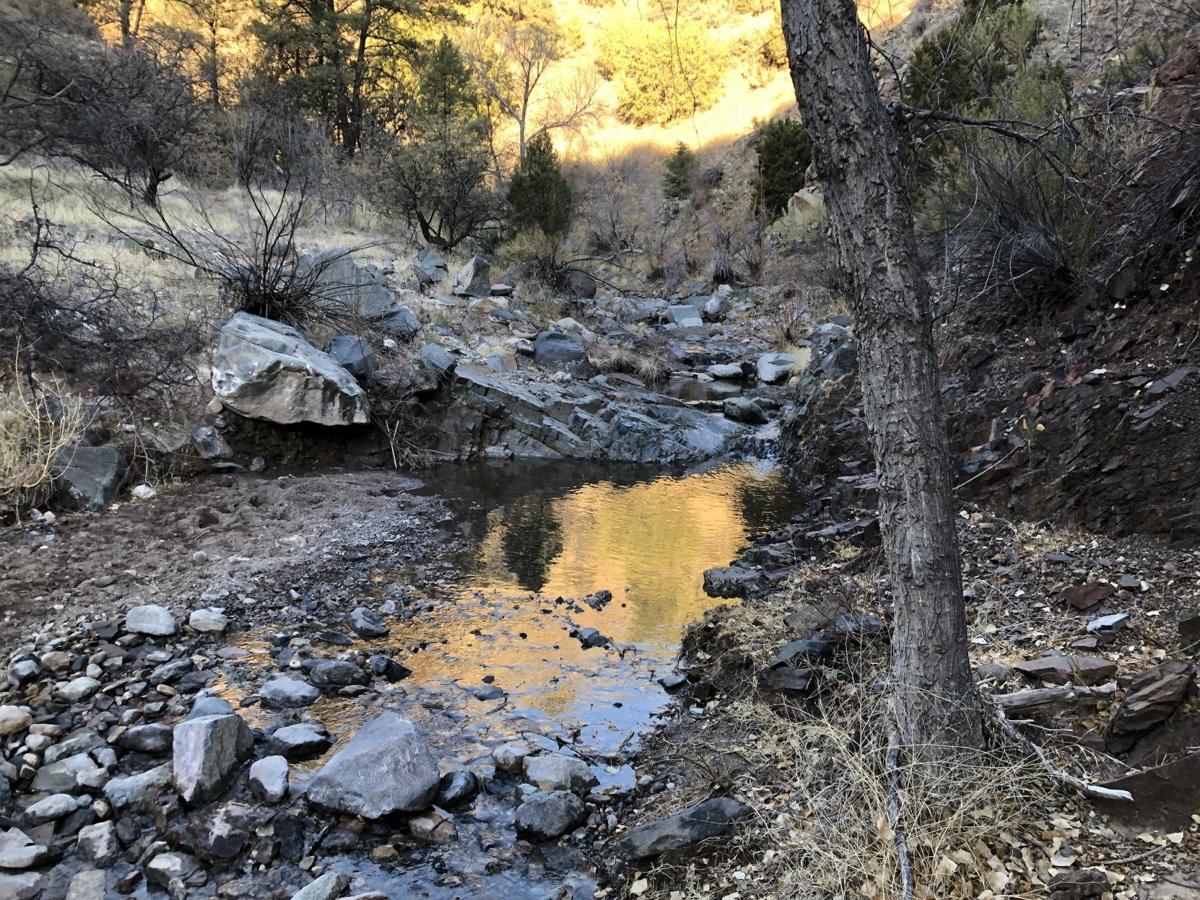 About 2.5 miles into the Copper Canyon Loop, you reach a stream crossing and a side path that leads to the seasonal waterfall.

That long drive down the mountain from Flagstaff to Phoenix, roughly 145 miles and a 30-degree temperature change, can be a real slog. What’s needed is a respite from the road, an oasis along the way. Camp Verde seems as good a place as any, given that it’s about an hour into the trip.

This 4.1-mile jaunt in the foothills southwest of Camp Verde — freeway-close, too — is much preferable to the Subway or Burger King at the previous exit but, should hunger strike after this bout of exercise, you can always double back and imbibe.

The great thing about this trail — actually, there are several, but the most salient to travelers — is that it is short enough not to take up a big chunk of your time on your way to that thriving metropolis in the Valley. Runners can knock it out in about 30 minutes, 45 tops if you stop at the seasonal waterfall, and even the most dawdling hiker won’t need more than 1 hour, 10 minutes.

That’s not to say the Copper Canyon Loop is quick, easy and forgettable. You’ll climb 513 feet, about 300 of which comes in the first mile as you weave inexorably up a set of long switchbacks to the ridgeline. But it’s a subtle gain in elevation, nothing drastically steep. After one or two switchbacks, you’ll be somewhat surprised to look down and see how far away your car looks in the trailhead parking lot.

The fact that Camp Verde sits at 3,250, as opposed to Flagstaff’s 7,000, goes a long way toward easing the burden of the climb, as well.

As for sights, don’t expect a lush ponderosa pine forest, like at home. Nor is that that interesting blend of desert and mountain terrain, punctuated by the pretty red-rock geology, of Sedona up the road apiece. No, in Camp Verde, you have solidly entered a desert milieu, though not quite yet the blasted, sandy, saguaro landscape you’ll find farther south.

There are a variety of trees and shrubs, for one. For every yucca and cactus you dodge, you’ll pass by some junipers and scrub oak and even an occasional pinon pine, with leaves waving at you in the breeze. (By the way, it’s almost always windy on this trail.)

Also featured is something called the crucifixion-thorn plant, which looks like a mix between a tree and a shrub and is as spiny and spiky as its name implies. I have a nasty gash on my right shin thanks to this freak foliage. At first, I thought the crucifixion-thorn were simply dead or neglected branches from some other, heartier bush – tumbleweeds in training, in other words. But, nope, these grey-barked wonders can grow as high at 10 feet.

Once you ascend to the ridge and get most of the climbing behind you, the singletrack trail flows and winds down the backside of the ridge before briefly climbing again. It is at first point when views of Interstate 17 appear. You can look at this eventuality one of two ways: either it’ll remind you that more than half of the slog to Phoenix still awaits you; or it’ll buoy your spirits that you found time to be virtuous and log exercise in the midst of commuting.

In any event, you aren’t subjected to the I-17 drone for too long. Instead, you are treated, about 2.5 miles into the loop, by a 0.2 of a mile side trail to Copper Falls, which only flows part of the year (like, right now) and should not be missed.

Let’s face it, it’s not the most impressive falls you’ve ever laid eyes on. Havasupai Falls, it definitely is not. But, hey, in a parched landscape, any flowing water is to be celebrated and gawked at. It takes just a wee bit of rock hopping to make it to the viewing spot, but it won’t tax your system or even get your shoes wet.

Back on the main trail, it’s an easy 1 ½-mile glide back to the trailhead. In fact, the entire trail is a glide. The path itself is extraordinarily smooth – only a few jutting rocks to impede your way – which is why mountain bikers and equestrian users also frequent it.

And the best thing is that, in an area where ATV trails outnumber all other paths, motorized vehicles are prohibited from the loop trail.

In no time, it seems, you’re back in your car, back on the road (after an obligatory stop at the Camp Verde Starbucks for rehydration) and headed to your destination.

The Route: From the trailhead, start at the north-west corner. Look for the brown sign noting Trail 504. Head straight up the switchbacks to begin. At about 2.5 miles, you'll reach a stream crossing, with a side trail to the west. That is the turn for the seasonal waterfall. Return to the main trail and follow it back to the trailhead.

That time in her life is over, thankfully. Laura Wilson, seven years on, has mostly resumed living in the B.C. period, before cancer. All is w…

From a rescuer's perspective: Injured hiker forced to stay overnight on Mount Elden

A search for an injured man on Mount Elden turned into an overnight rescue operation as daylight faded and weather took a turn for the worse.

The Flagstaff Police Department released body camera footage, audio from 911 calls and police reports related to a use-of-force incident that …

The seasonal Copper Fall, nestled into a hillside between Camp Verde and Interstate 17, is only a short detour away when completing the Copper Canyon Loop.

The Copper Canyon Loop has a variety of trees and shrubs, including the spiny crucifixion-thorn bushes, which can grow to 10 feet in height.

The path is smooth throughout the 4.1-mil Copper Canyon Loop, making it popular with all types of trail users except for motorized vehicles, which are prohibited.

Off the ridge, near the end of the Copper Canyon Loop, the terrain becomes more like desert, complete with a water tank.

About 2.5 miles into the Copper Canyon Loop, you reach a stream crossing and a side path that leads to the seasonal waterfall.