Outdoors: Cornville: Off the beaten path, but on a smooth one
2 comments
Share this
{{featured_button_text}}
1 of 5 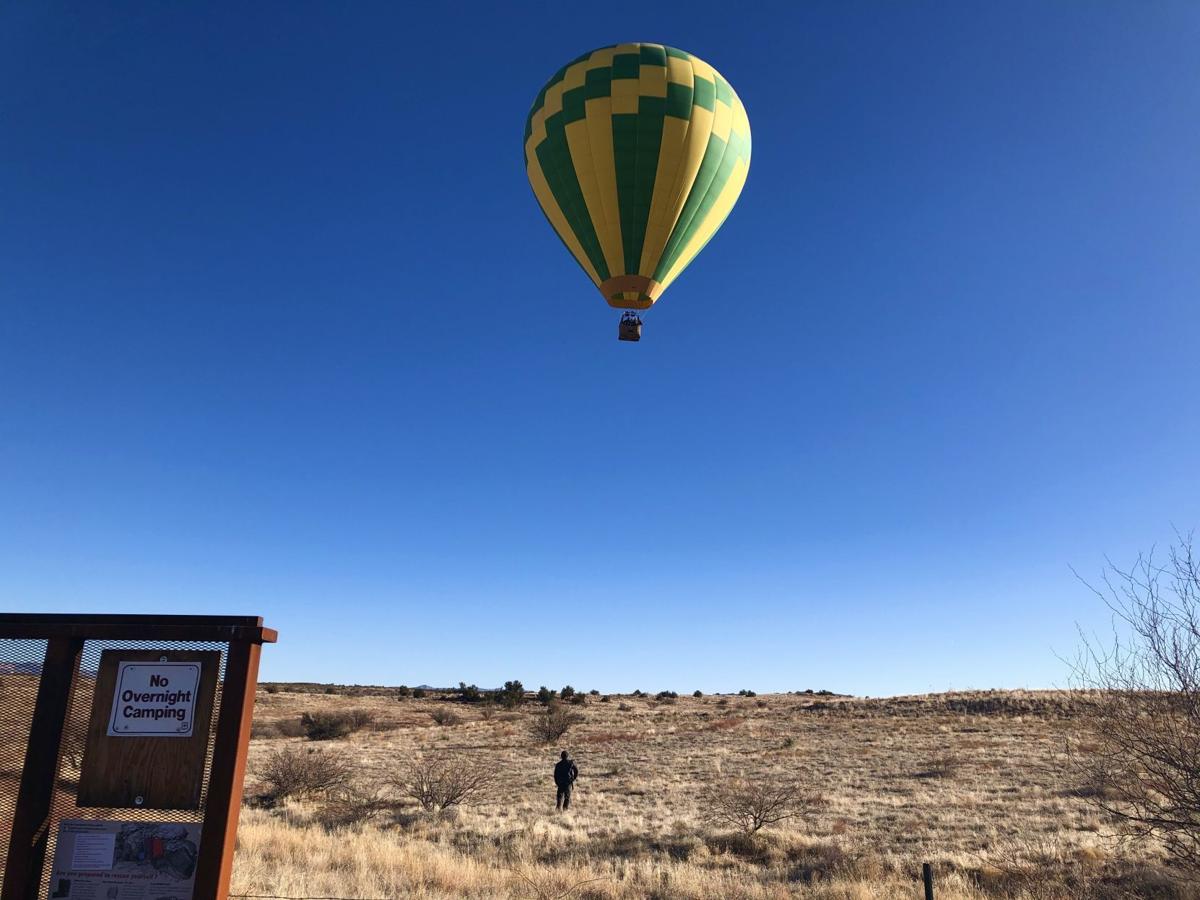 A hot-air balloon finishing up a tour of Sedona prepares to land in the scrub-brush next to the Cornville Non-Motorized Trails, a pleasant, solitary jaunt when not serving as a landing spot. 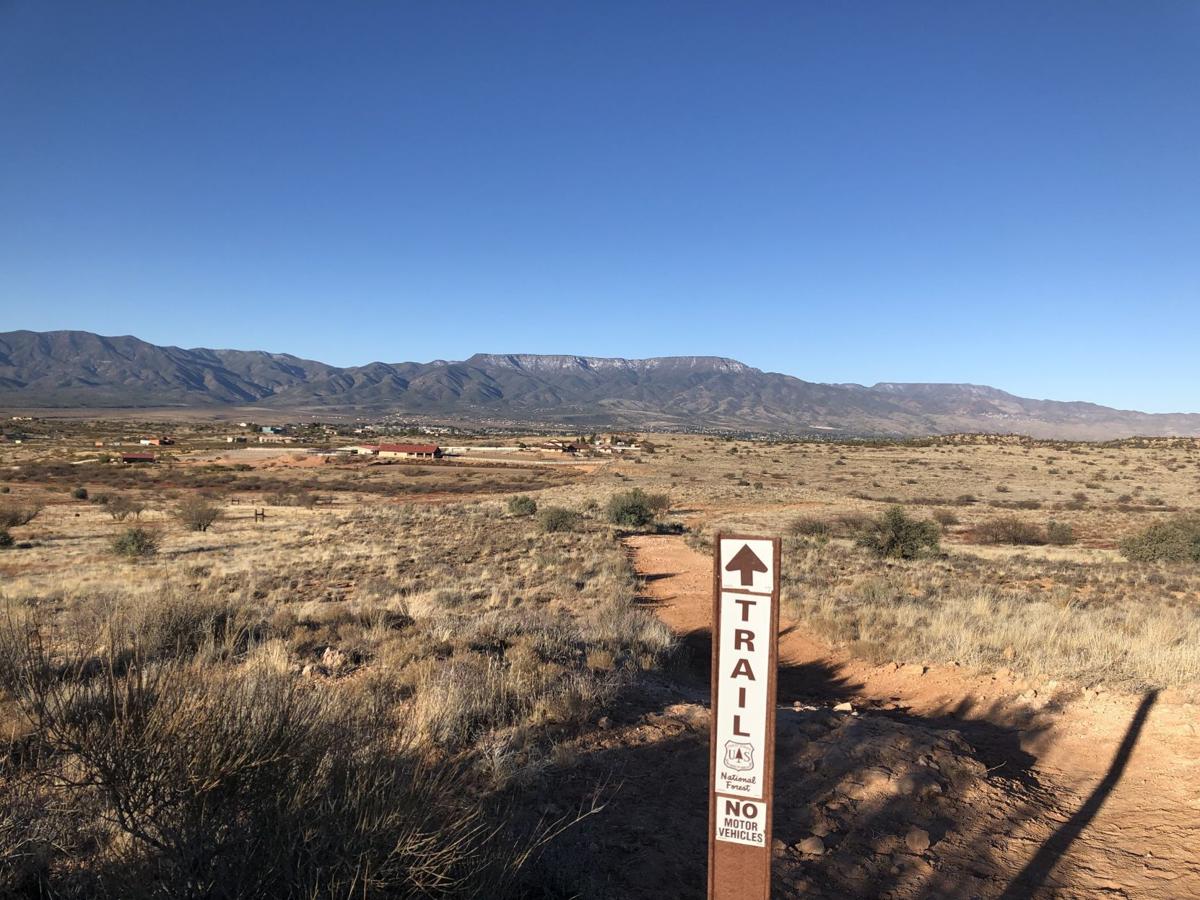 At the height of the Black Grama Trail, part of the Cornville Non-Motorized Trails, you can see all of Cottonwood, Jerome and the Mingus Mountains. 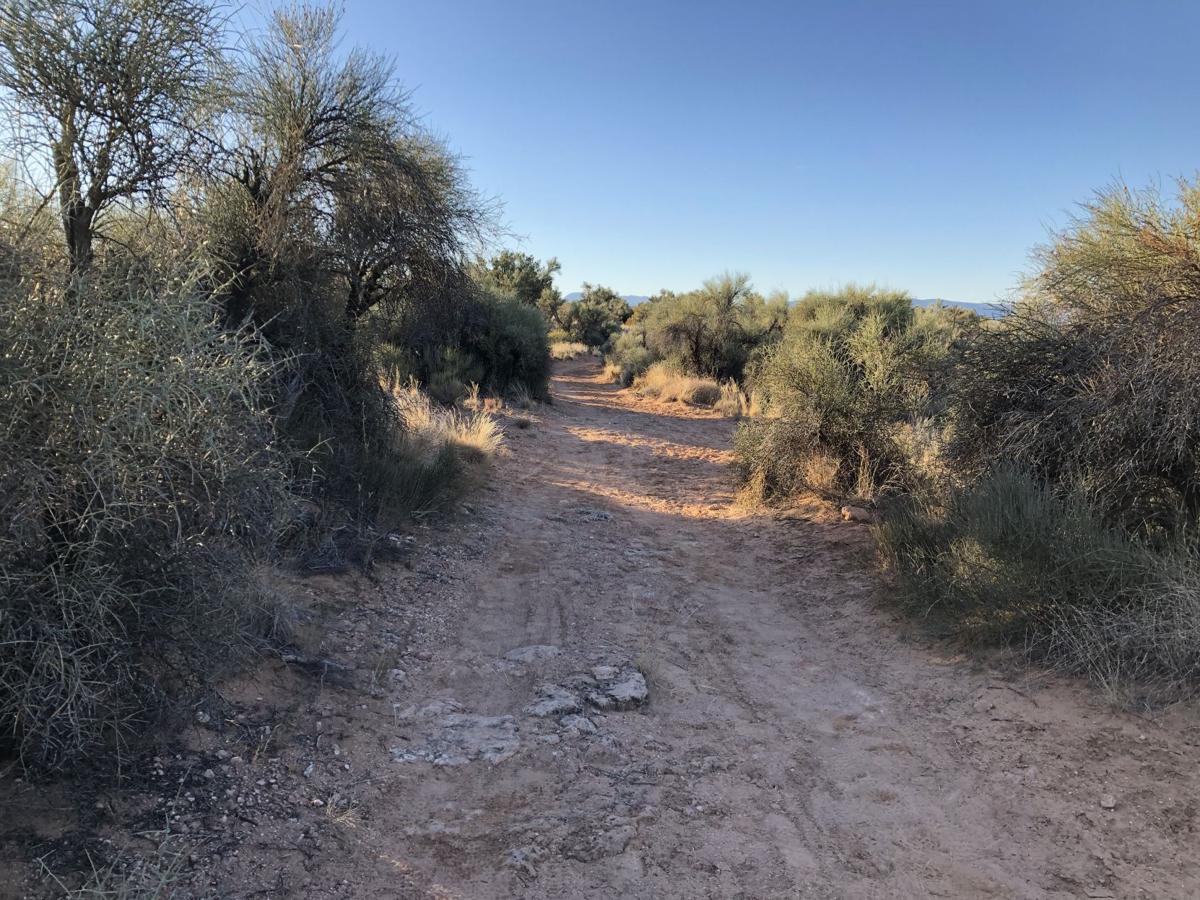 The paths on the Cornville Non-Motorized Trails are smooth and well-signed, though there's not much shade to be found in the high-desert terrain. 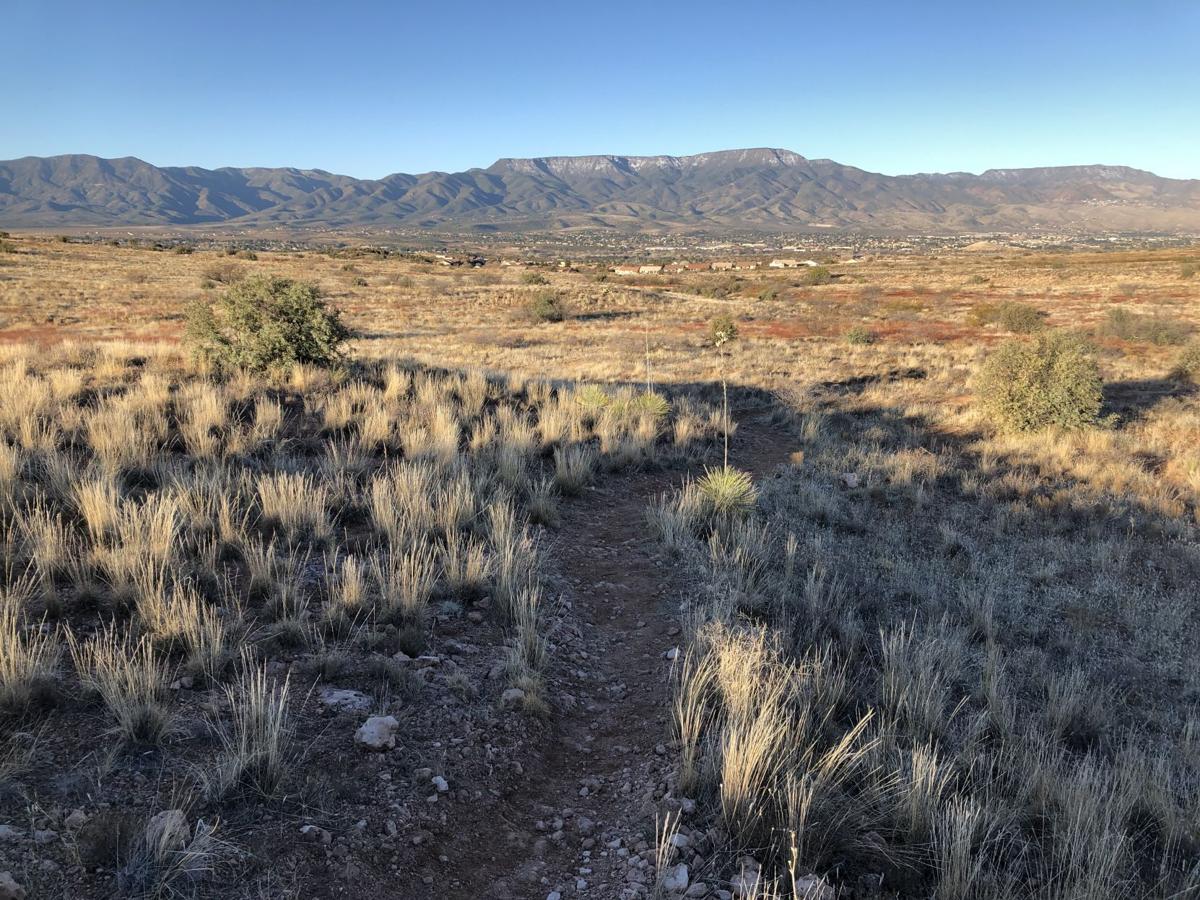 In the morning, if the dew sticks around, you can smell the sage coming off the brush on the Cornville Non-Motorized Trails. 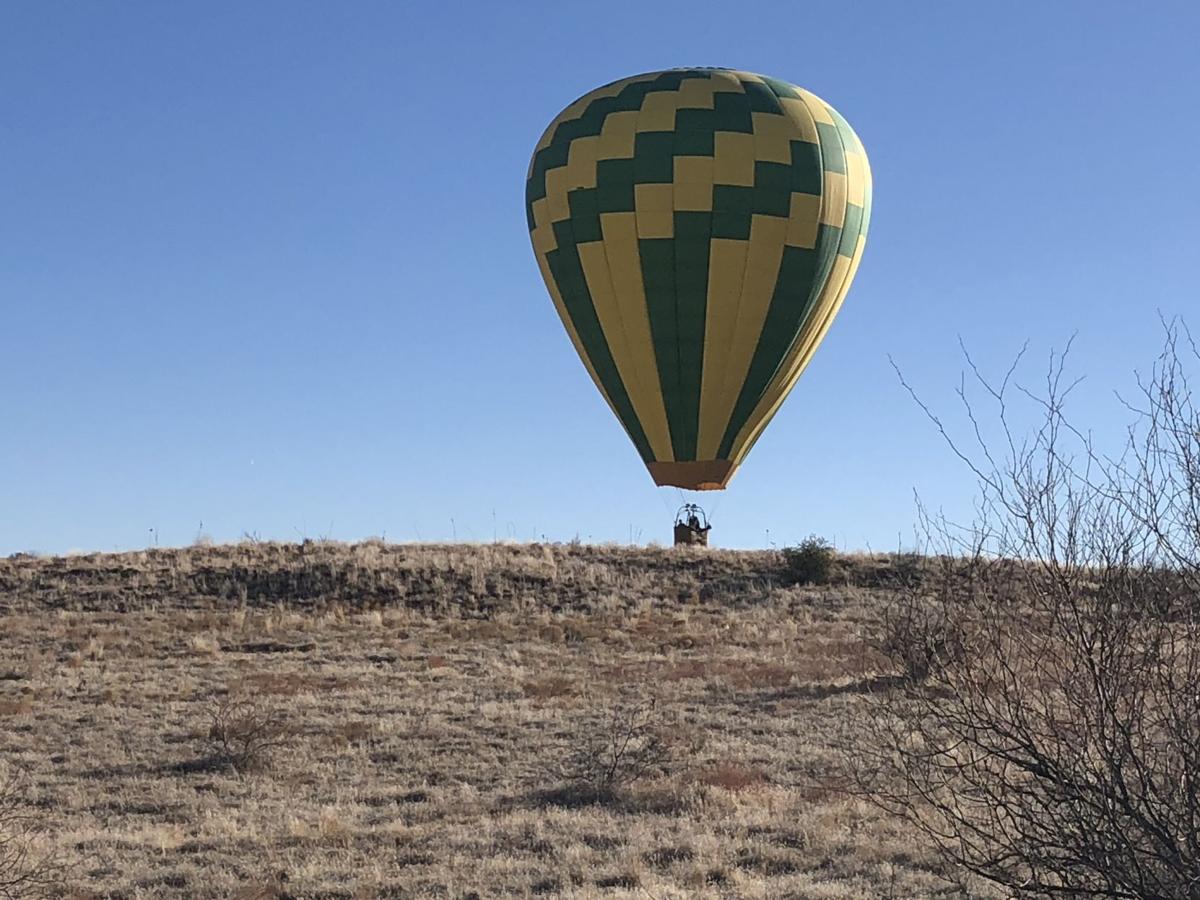 A hot-air balloon from Sedona just touches down on the scrub fields not 30 feet from the Cornville Non-Motorized Trails.

Now that wasn’t very nice, was it? John McCain had a place in Cornville. Loved it there.

Allow me to start over.

Say you’re headed to Cottonwood to go antiquing, sip some local wine and loll about in the Verde River, or say you’re making another foray down to the Valley on Interstate 17 and get the urge to hike trails (hey, it could happen), then may I suggest a stop at the Cornville Non-Motorized Trails?

The name may be prosaic and uninspiring, but the trails themselves are quite nice. Well-groomed, not too hilly, the scent of sage wafting off the high-desert brush. There are no dramatic vistas, no rutilant geologic wonders at which to gawk, as in Sedona 10 miles north.

Cornville’s charms are more subtle, more elemental. You can be alone with your thoughts on these trails, let your mind wander, without fretting about tripping over sandstone slabs or fending off the touristic hordes.

At most, you might have to step aside for an occasional equestrian clopping by or give a mighty heifer a wide berth. Cornville locals use the trails, of course, and city folk from nearby Cottonwood probably make the drive, too. And, at least on the Saturday morning I visited, every hiker was quick with a wave and a “g’ mornin’,” and those with dogs had them secured on leashes. Yup, every single one.

So as not to be accused of shilling for the Cornville Chamber of Commerce, let me muse upon why I think more people don’t flock to the Cornville Non-Motorized Trails. I had plenty of time to mull while loping along the 4.5-mile Creosote-Dog Leg-Black Grama Loop, an expanse of high-desert scrub, and here’s my startling epiphany:

There, I said it.

Boredom, however, can be a balm, especially in these fraught times of pandemic and political upheaval. Boredom, when re-imagined as contemplative solitude, has its upsides. I like boredom.

About a mile into the loop, which I began smack in the middle of the 12-mile trail system at the Tissaw Trailhead, having encountered no soul save a lone darting jack rabbit, my mind drifted to thinking if I was the first Flagstaffian to ever set sneaker on these trails. We mountain folk, after all, are inordinately (and justifiably) proud of our lush trail system, and the farthest we might roam for a change of scenery would be the Sedona red rocks.

But then the Creosote Trail veered north and east and slightly uphill, getting a bit too close to Route 30 for my liking, and I spotted in the distance two hot-air balloons, green-and-yellow against the blue sky.

Was Sedona really this close to Cornville? Or was this an optical illusion? Or, perhaps, had the balloonists strayed off course?

These bulbous flying machines seemed to hover there, halfway between Sedona and Cornville. I wondered whether the nearby Verde River was that much of a draw that tourists would want to see that, rather than the red-rock formations, from on high. The trail then turned south, and slightly downhill, and I forgot all about the balloons.

At this point, I could give full concentration on taking in the subtle splendors of the Cornville Trails. My first impression was admiration for the three entities that blazed these trails: the Cornville Community Association, National Forest Service and Yavapai County. They were the smoothest and most well-marked paths I’ve encountered in a non-urban setting.

This allows the runners among us to move swiftly without fear of falling. But you’ll want to linger — or, at least, slow down — at certain spots and enjoy the views. Because the terrain is pretty flat, you can see for miles. Cottonwood and Jerome to the west and south and “downtown” Cornville to the immediate east (the trails are west of the town’s center). You can sort of see Sedona to the north, if you squint. And, somewhere in there, the Verde River winds leisurely by.

By the time you reach the Black Grama Trail, well-signed and also adorned with a gnarled mesquite branch, ringed by limestone boulders that some local artist has planted at the junction, you start seeing signs of civilization. A few ranch spreads are just to the south — no, not McCain’s old place — and a few cows graze lazily in the morning sun. Off in the distance, near the trailhead, sits the gated community straddling the outskirts of Cottonwood and Cornville, which kind of breaks the contemplative spell.

And there they hove into view again, the hot-air balloons. They seemed, incongruously, to be getting closer to Cornville, not farther away toward Sedona. As I traversed the final mile of Black Grama to complete the loop, they came so close that I could see faint outlines of people in the baskets.

Finishing up, I stopped at my car just as two white vans pulled into the Tissaw Trailhead parking lot. On their sides was the inscription, “Northern Light Balloon Expeditions, Sedona, Arizona.” Two men emerged from the vans, necks craned upward and speaking into walkie-talkies. The balloons were descending.

I got one guy’s attention.

“Are they landing here?” I asked, meaning the large dirt parking lot. “Am I in the way?”

The guy shook his head and pointed to a scrub-brush expanse just south of the trail.

I lingered to watch the first of the two balloons land safely, but took off before the passengers disembarked and congregated at the trailhead for a post-flight debriefing. Part of me, just for fun, wanted to stay and ask these Sedona tourists their impressions of Cornville.

On my way back on Route 30 toward I-17, a series of highway signs, spaced 50 feet apart, greeted me at the outskirts of Cornville proper:

Driving directions: From Flagstaff, take Interstate 17 south to Exit 293 signed for Cornville. Head west of Route 30/Cornville Road for 11 miles to Tissaw Road. Turn left (south) and go 1 mile. The trailhead is on the left.

The route: From the trailhead, go east of the Tissaw Link for 0.15 miles. Turn left at the sign for the Backbone Trail. Take that 0.1 of a mile and turn left on the Creosote Trail. Follow Creosote for 1 mile and turn left onto the Dog Leg Trail. Take Dog Leg for 0.5 miles to the junction with the Black Grama Trail. Follow Black Grama for 2.5 miles back to the Tissaw Link and return to the trailhead.

Watch Now: How Ava, The Avalanche Dog, assists in mountain safety at Snowbowl in Flagstaff

As Flagstaff’s peaks have been buried in snow, Snowbowl’s furriest ski patroller is prepared for a possible avalanche search and rescue on the…

A hot-air balloon finishing up a tour of Sedona prepares to land in the scrub-brush next to the Cornville Non-Motorized Trails, a pleasant, solitary jaunt when not serving as a landing spot.

At the height of the Black Grama Trail, part of the Cornville Non-Motorized Trails, you can see all of Cottonwood, Jerome and the Mingus Mountains.

The paths on the Cornville Non-Motorized Trails are smooth and well-signed, though there's not much shade to be found in the high-desert terrain.

In the morning, if the dew sticks around, you can smell the sage coming off the brush on the Cornville Non-Motorized Trails.

A hot-air balloon from Sedona just touches down on the scrub fields not 30 feet from the Cornville Non-Motorized Trails.