NBA tipoff: Live news and scores as the NBA begins its 75th season

Outdoors: Bearing up well climbing the Oldham Steps
2 comments
Share this
{{featured_button_text}}
1 of 7 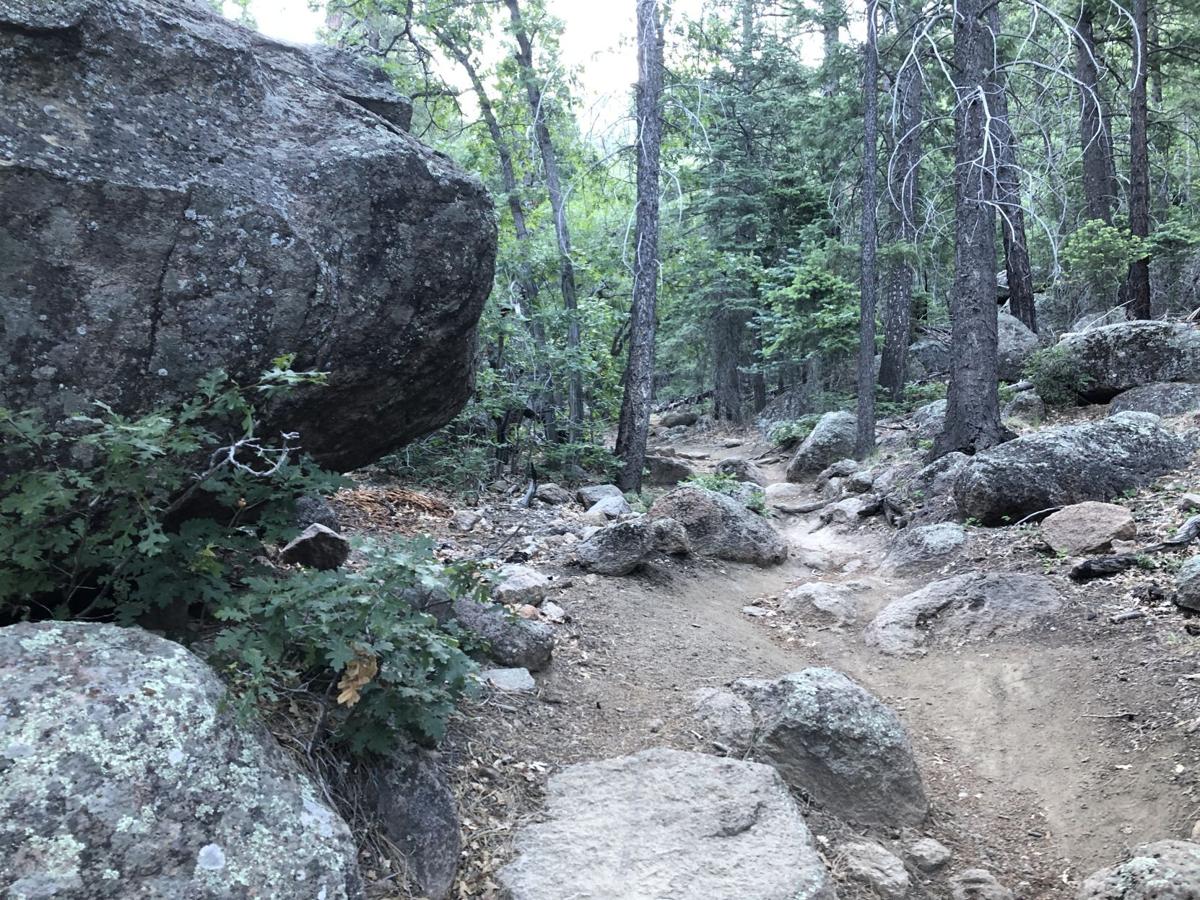 The "Oldham Steps," officially known as the Lower Oldham Trail, climbs more than 700 feet in 2 miles along the slopes of Mount Elden. 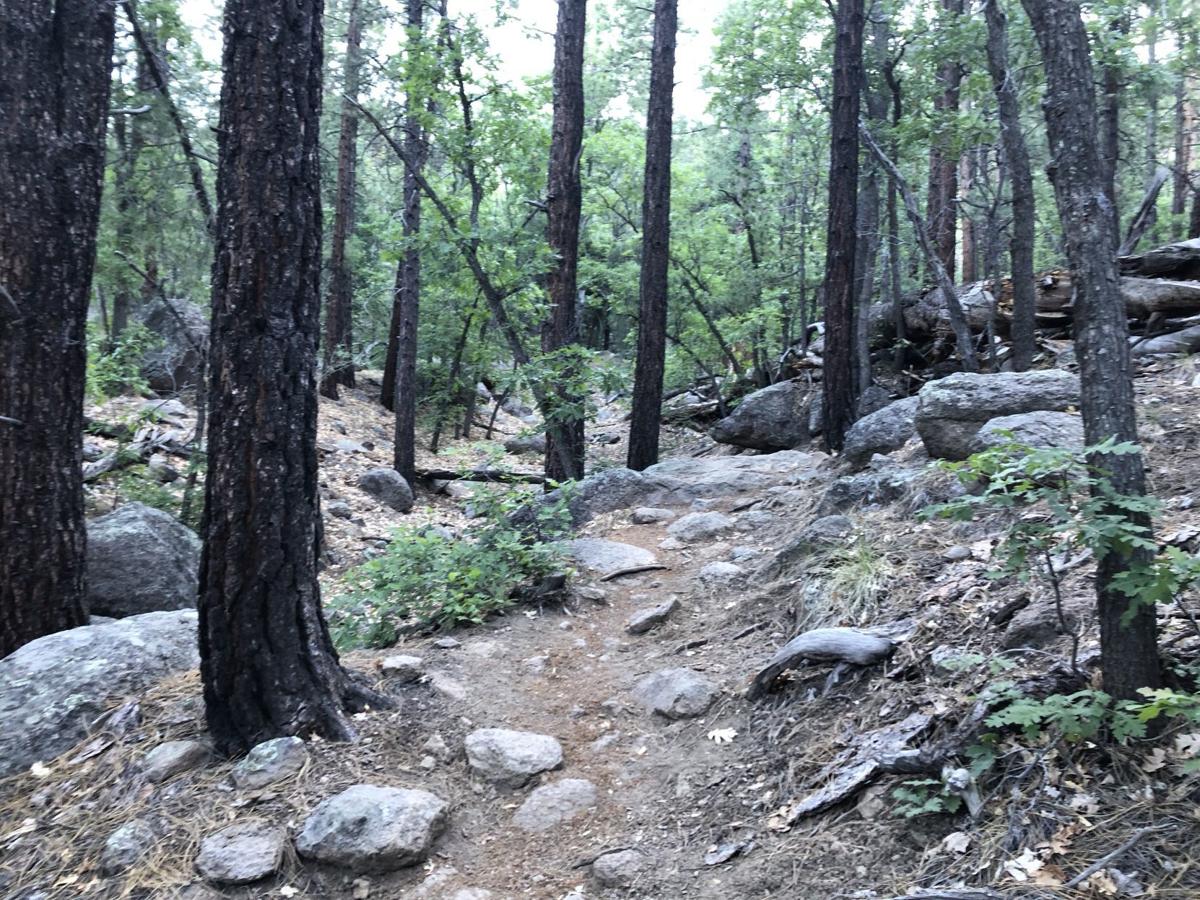 You must dodge embedded rocks and boulders on the two-mile stretch of the Lower Oldham Trail. 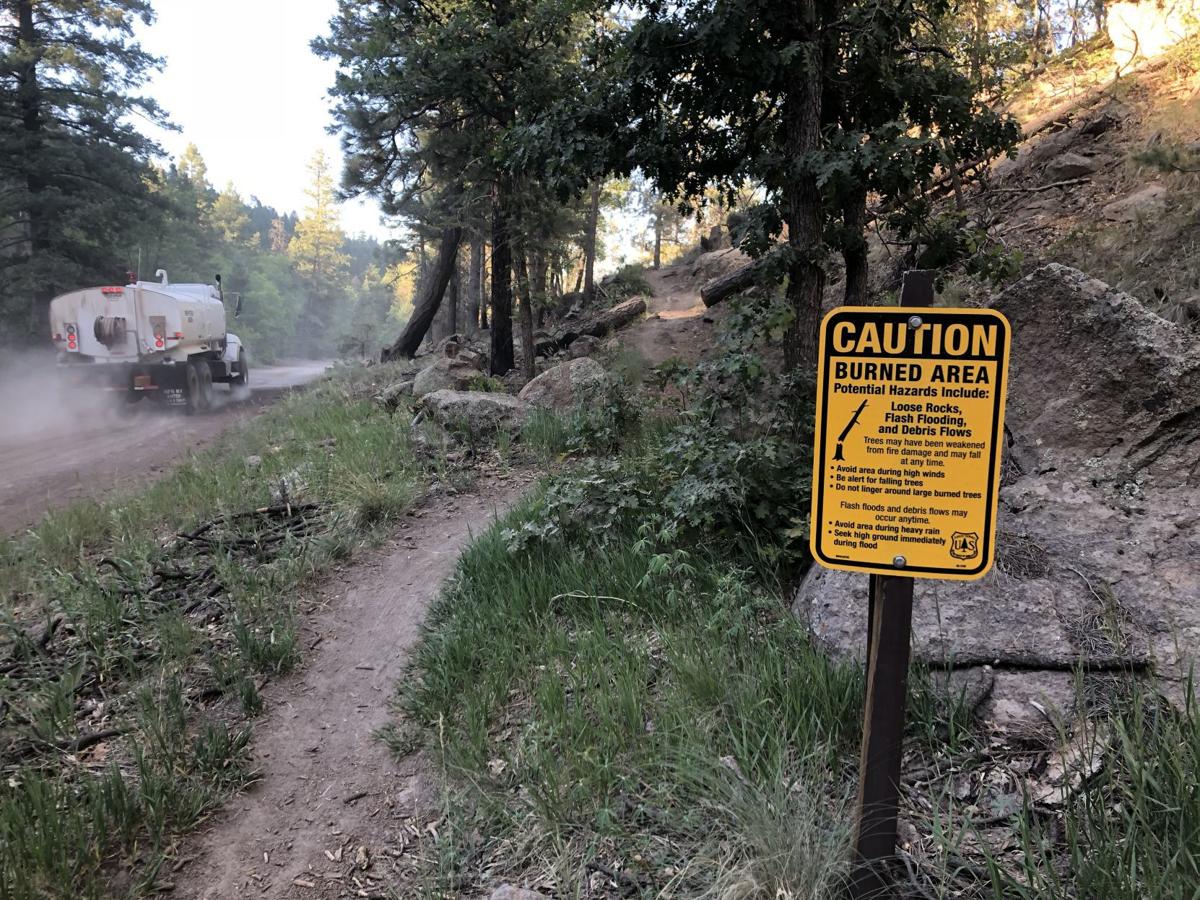 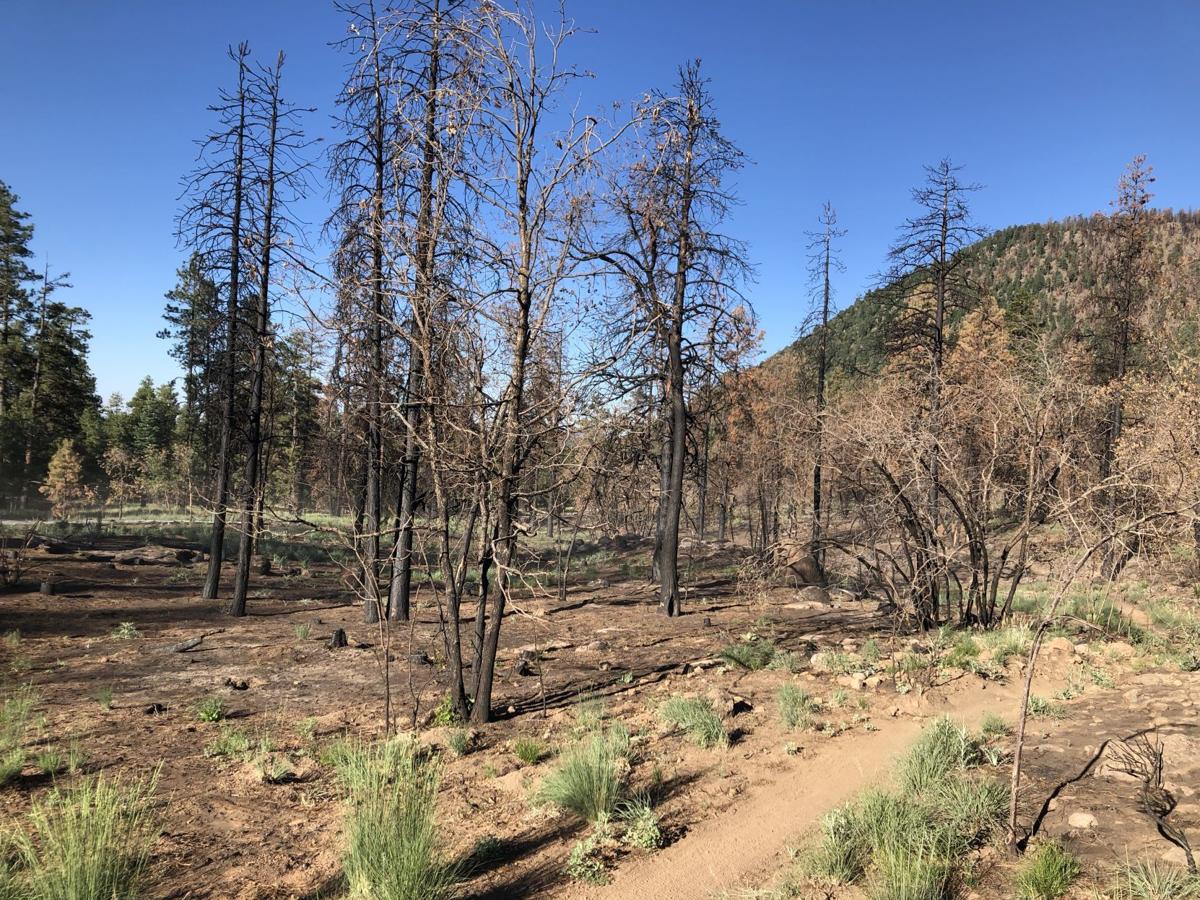 The burn scar from last summer's Museum Fire is painfully evident along the Rocky Ridge Trail, where charred remains of pine trees line the path. 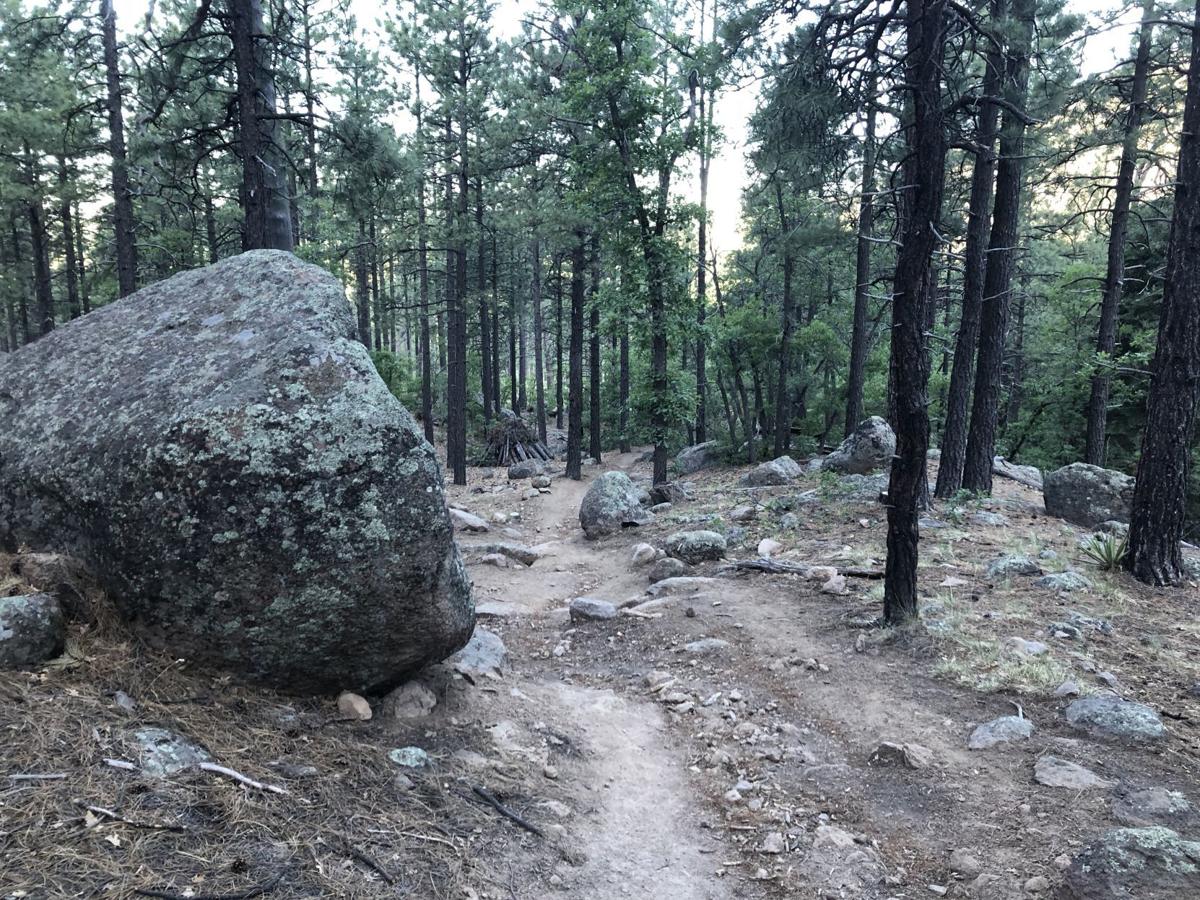 Not all of the Oldham Steps climb is uphill. Here is a fun, curvy downhill section. 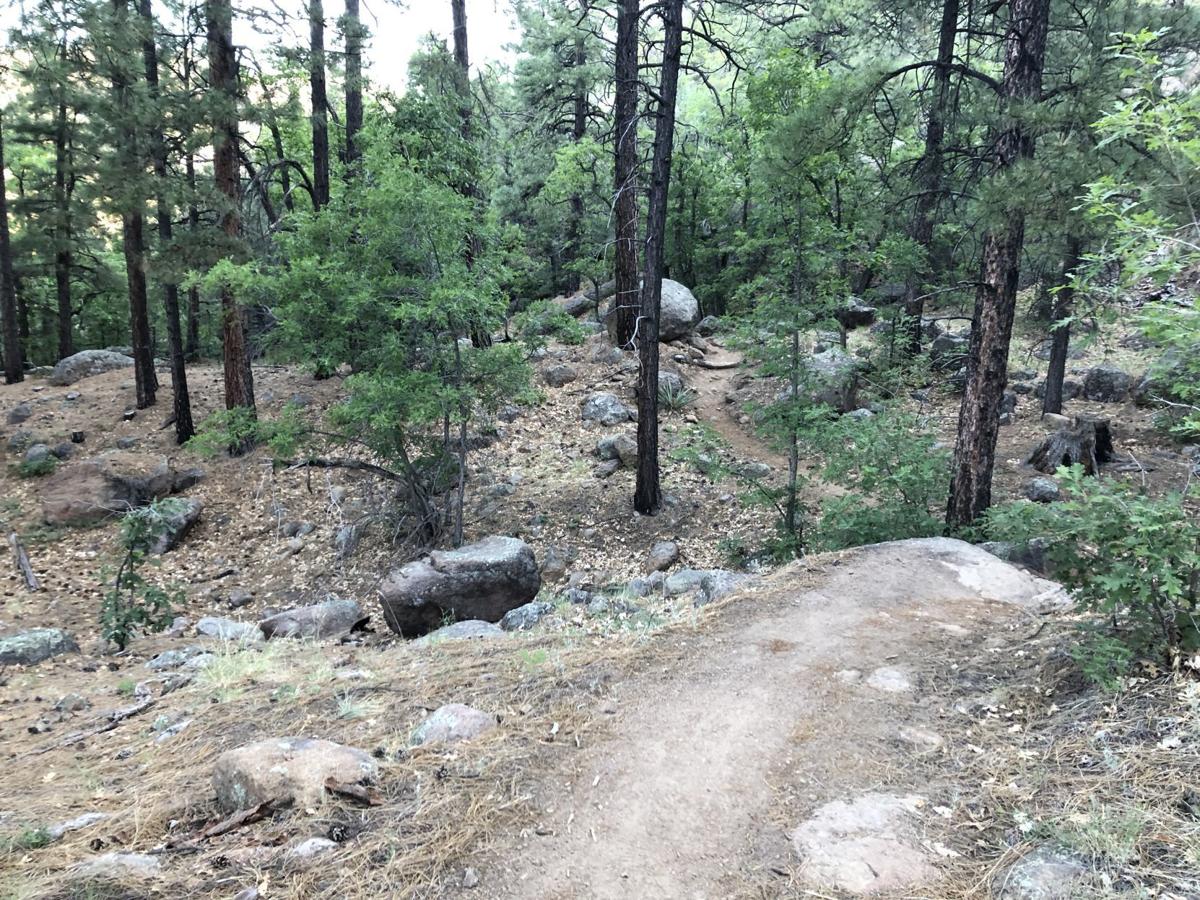 Near the three-mile mark on the Lower Oldham Trail, aka, the Oldham Steps, you may get lucky and encounter bears that call the area home. 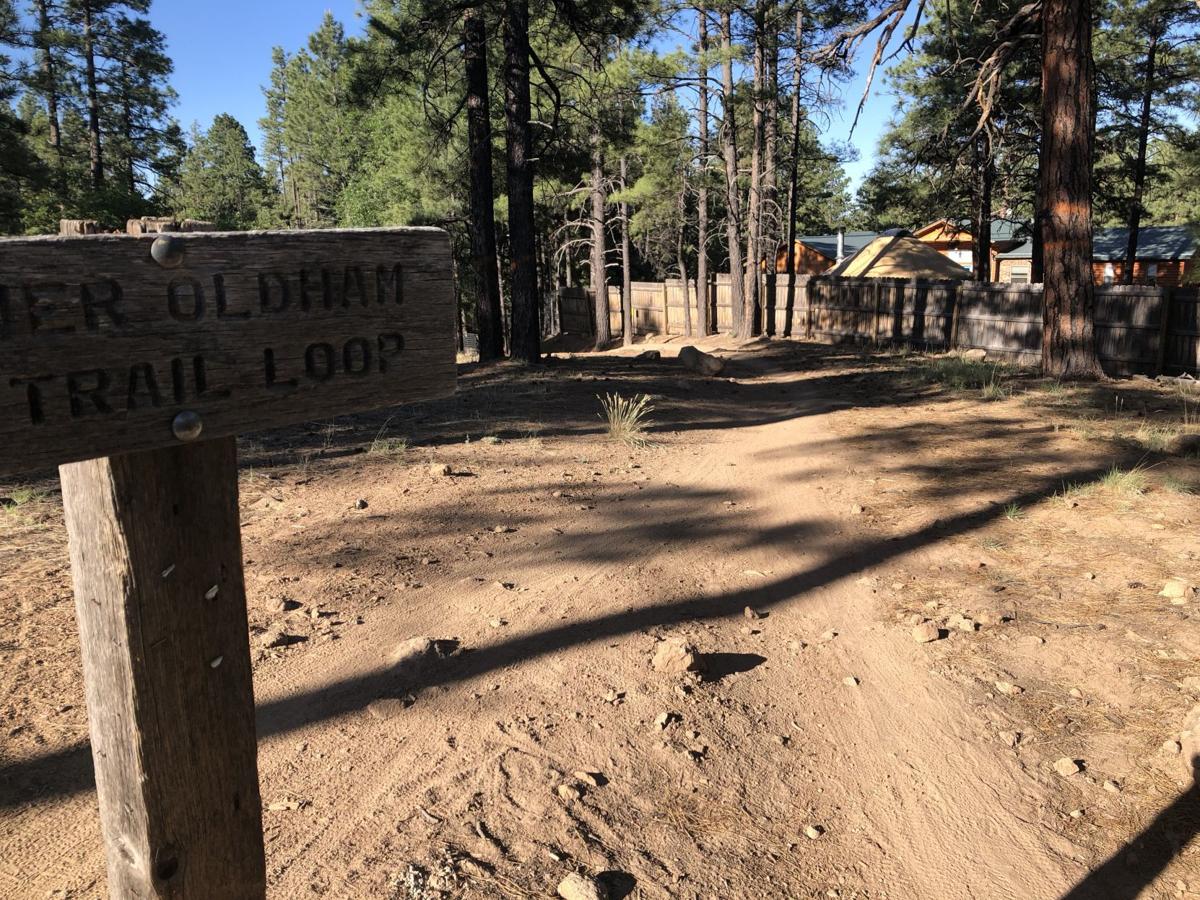 Once you reach the unmarked Easy Oldham Trail, keep on the trail to the right (closest to the houses) to get back to Buffalo Park.

Time, during quarantine, has an elusive elasticity. Even communing with nature on the trails seems different now, somehow slower paced and more contemplative. Was I out there two hours or two days? Hard to say. My mind and body wander at will, trying to both process and forget the current roiling social climate.

That feeling took hold once more the other day, as I finally tackled Flagstaff’s famous Oldham Steps — officially known as the Lower Oldham Trail — just after dawn. The Steps is a two-mile segment along Mount Elden’s slopes between Buffalo Park and Elden Lookout Road, during which you gain about 800 feet in elevation while dodging stones and boulders.

I hadn’t been able to run the Oldham Steps last summer and fall, because the trail was closed following the devastating Museum Fire. In fact, every part of the 6.4-mile Oldham Loop, which encompasses The Steps, a nearly mile-long segment of the Rocky Ridge Trail and the aptly-named Easy Oldman Trail, was closed until recently due to burn damage.

So I set off at a hard lope down the middle of Buffalo Park, watching the face of Mount Elden lighten in the gathering dawn, then negotiated the rocky downhill of the Arizona Trail once out of the park and began to climb in earnest just about where the sign for the Lower Oldham Trail beckons.

Suddenly, it felt as if I was hardly moving, though my labored breathing and skyrocketing heart rate confirmed my effort. Climbing The Steps felt meditative: not a mindless slog, but more of a contemplative churning, step by step, rock by rock. Don’t even bother to look down at your Garmin watch; time matters little, just keep moving.

The Steps show mercy after a while. You reach plateaus, and even a few downhills, before the climbing resumes. After a while, I was able to get in a fugue state, to nearly dissociate, because not a soul was stirring on this popular trail this early on a Sunday morning. I felt, in a certain respect, out of time, free from worries of the coronavirus and fraught thoughts of protests and injustice.

Then, I turned a corner on the trail and saw, not 20 feet in front of me, a bear.

I stopped dead in my tracks.

I was struck, simultaneously, with wonder and fear.

Wonder, because in nearly a year traipsing around the mountains of Flagstaff I had not seen much wildlife, certainly not a bear. Most days, I was lucky to catch sight of a squirrel. Fear, because, well, it’s a freakin' bear.

Now, I’ve encountered bears before while living in northern California, including an early-morning encounter on the Foresthill Loop in Auburn in which the sight (and, perhaps, smell) of me sent a huge and hulking ursine rambling down a steep embankment to flee, crunching tree branches in its wake. California bears: kind of wimpy. I also had one bear sighting in the Bridger Mountains near Bozeman, Montana, home of grizzlies. I can’t be certain if it had been a black bear or grizzly; I didn’t stick around long enough to find out.

But here, on a silent Sunday morning, I encountered my first Flagstaff bear. I wished, in that moment, I had brought my smart phone to snap a photo. It was walking — no, lumbering — down the trail ahead of me. I stood there staring. It was a small bear, as bears go, about the height of large dog, say, a Great Pyrenees. But stout and wide, nearly filling up the entire singletrack. It paws were the size of sauce pans.

Could it be, I wondered, a cub? If it were a cub, that would not be good news. Because where there are cubs, there are mama bears around. And if there’s one thing I do know, you never want to startle a mama bear protecting her young.

Just then, the bear stopped and slowly craned its neck to the left. It was looking back at me. Now, I know I’m anthropomorphizing here, but the look on the bear’s face was one of annoyance, as if wondering why I was spoiling its morning stroll, the quest for breakfast. Maybe this wasn’t a cub; maybe it was a teenage bear, I thought, because I’ve seen that look of disdain on my own kids’ faces. All that was missing was acne and eye rolling.

We made eye contact then, the bear and I. We had a moment. Then, as quickly as the bear stopped and looked back, it stoke its gaze and started walking — no, ambling — away from me once more. This bear was slow. It must have taken a minute for it to reach the next bend, where large boulders lined the right side of the trail and open grassland dotted with pines on the left.

Talk about social distancing. I stood stock still and let it get out of sight. I was still, perhaps needlessly, worried about the prospect of a mama bear materializing, so I didn’t move for a while. Maybe five minutes. Maybe shorter. Hard to tell.

My choice, at this point, was to turn around and retrace my steps on The Steps or proceed where the bear led the way. I was only about three-quarters of a mile from the end of the Lower Oldham Trail, where you cross Elden Lookout Road and pick up the Rocky Ridge Trail to continue the loop. I pressed on, hyper-aware and certainly no longer dissociating.

I don’t know how long it took me to reach the Rocky Ridge Trail, but I completed The Steps without further ursine encounters. Only after veering onto the wide open Rocky Ridge Trail did I fully appreciate the privilege of seeing a bear in the wild, since numerous locals have told me bears make themselves scarce in these parts.

The rest of the loop was, honestly, kind of a letdown. Time sped up, partly because you go on the downhill section (0.8 of a mile) of the Rocky Ridge Trail and continue downhill on the (unmarked, but obvious) Easy Oldham Trail back to Buffalo Park, but also partly because you no longer feel immersed in deep nature.

Rocky Ridge runs parallel (above) the fire road, so occasional traffic kills the vibe. Plus, the path is pretty much denuded after the Museum Fire. Charred remains of downed trees and scorched earth line the singletrack, and it will be interesting to see how time heals the burn area.

Later in the week, I ran the loop again, this time with camera in hand. And, of course, no bear sighting. No wildlife at all. I really didn’t expect to see my little buddy again, but I must admit that time stopped when I got to the spot where we had our moment four days before.

The Route: From the trailhead at Buffalo Park, start on the middle trail in the park and pass by the Nate Avery Trail intersection to the signed Arizona Trail. Follow the rocky trail downhill. At about 1 mile, veer slightly left and uphill and continue uphill past several intersections, including one for the Pipeline Trail. When you reach the signed Lower Oldham Trail sign, it's a two-mile climb to the junction with Elden Lookout Road and the (closed, due to the Museum Fire) Brookbank Trail. Cross the fire road and veer left onto the Rocky Ridge Trail. Go 0.8 of a mile until you reach a sign saying "Rocky Ridge Access, Buffalo Park 2.8 mi." Recross the fire road and follow arrows. Stay on the unmarked dirt road for 0.25 of a mile and then veer right on an unmarked singletrack (heading toward some houses in the distance). This is the Easy Oldham Trail. Follow that path, staying to the right on the many intersections with social trails, until you reach the right turn to go uphill on the AZT to Buffalo Park.

The Flagstaff Police Department responded to a serious injury collision on East Soliere Avenue on Wednesday afternoon. The department said the…

The 2022 election may still be a year away but it is already shaping up to be a wild one in northern Arizona.

The City of Flagstaff is concluding the design phase for the $7.4 million Beulah/University roadway project -- putting the project on track to…

COVID-19 cases in Coconino County fell for the second consecutive week, according to the Friday dashboard data report. While the overall trans…

The "Oldham Steps," officially known as the Lower Oldham Trail, climbs more than 700 feet in 2 miles along the slopes of Mount Elden.

You must dodge embedded rocks and boulders on the two-mile stretch of the Lower Oldham Trail.

The burn scar from last summer's Museum Fire is painfully evident along the Rocky Ridge Trail, where charred remains of pine trees line the path.

Not all of the Oldham Steps climb is uphill. Here is a fun, curvy downhill section.

Near the three-mile mark on the Lower Oldham Trail, aka, the Oldham Steps, you may get lucky and encounter bears that call the area home.

Once you reach the unmarked Easy Oldham Trail, keep on the trail to the right (closest to the houses) to get back to Buffalo Park.