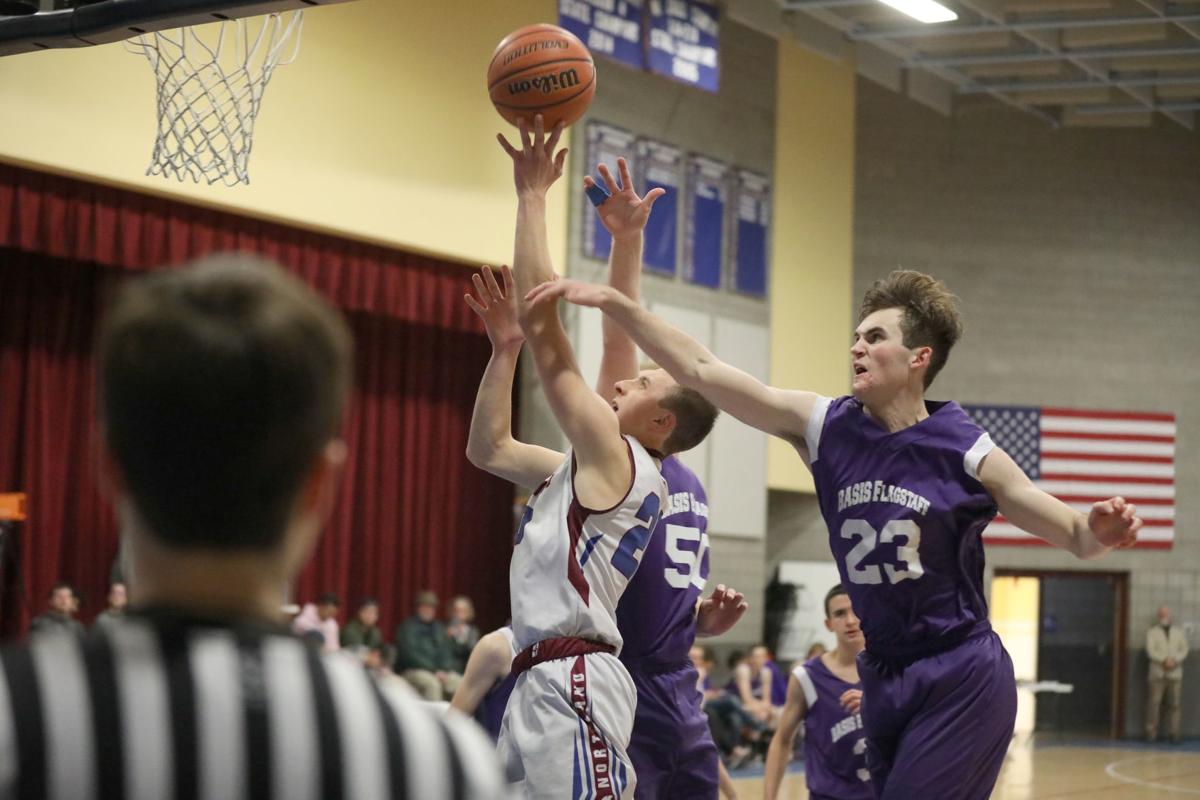 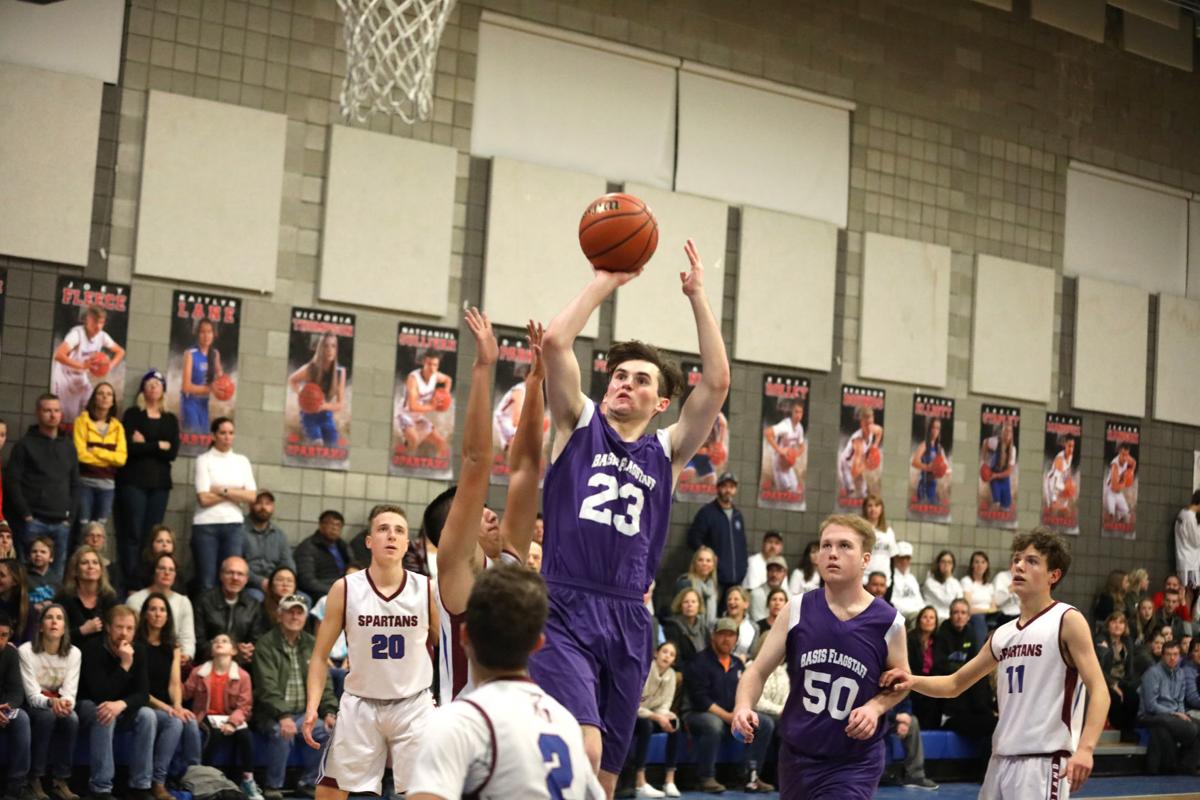 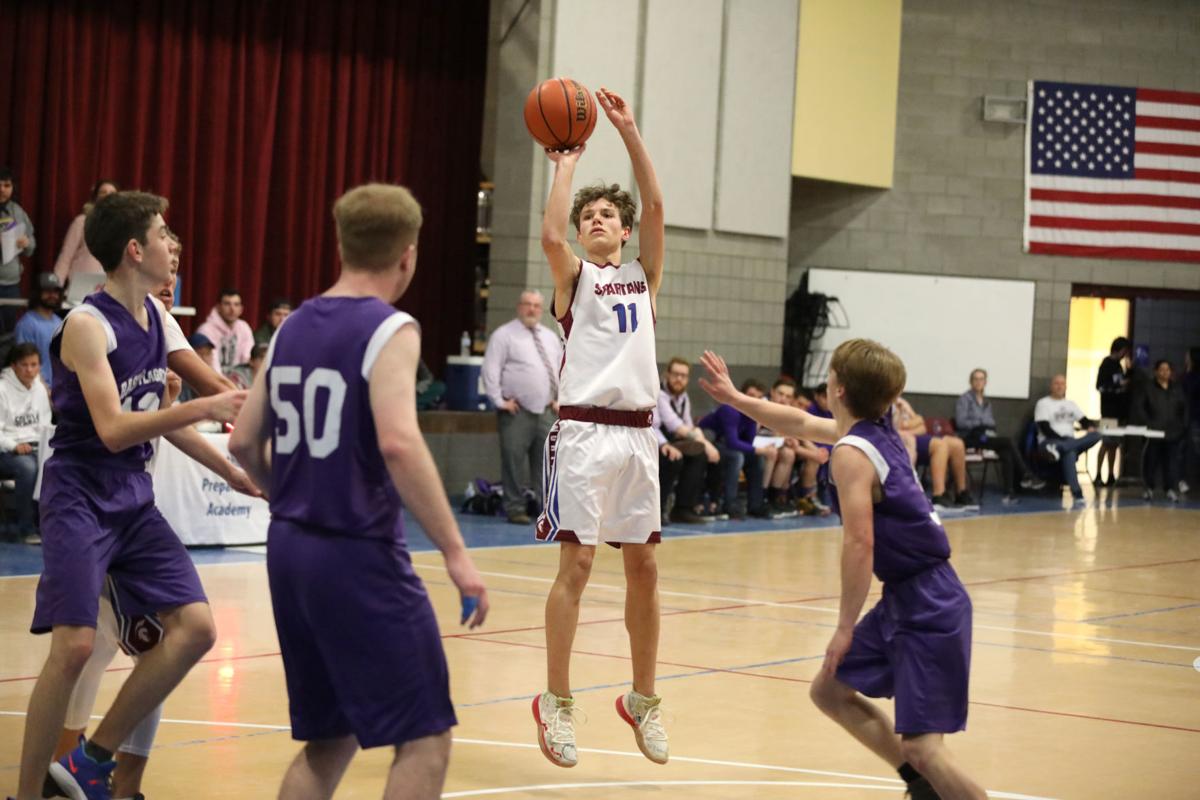 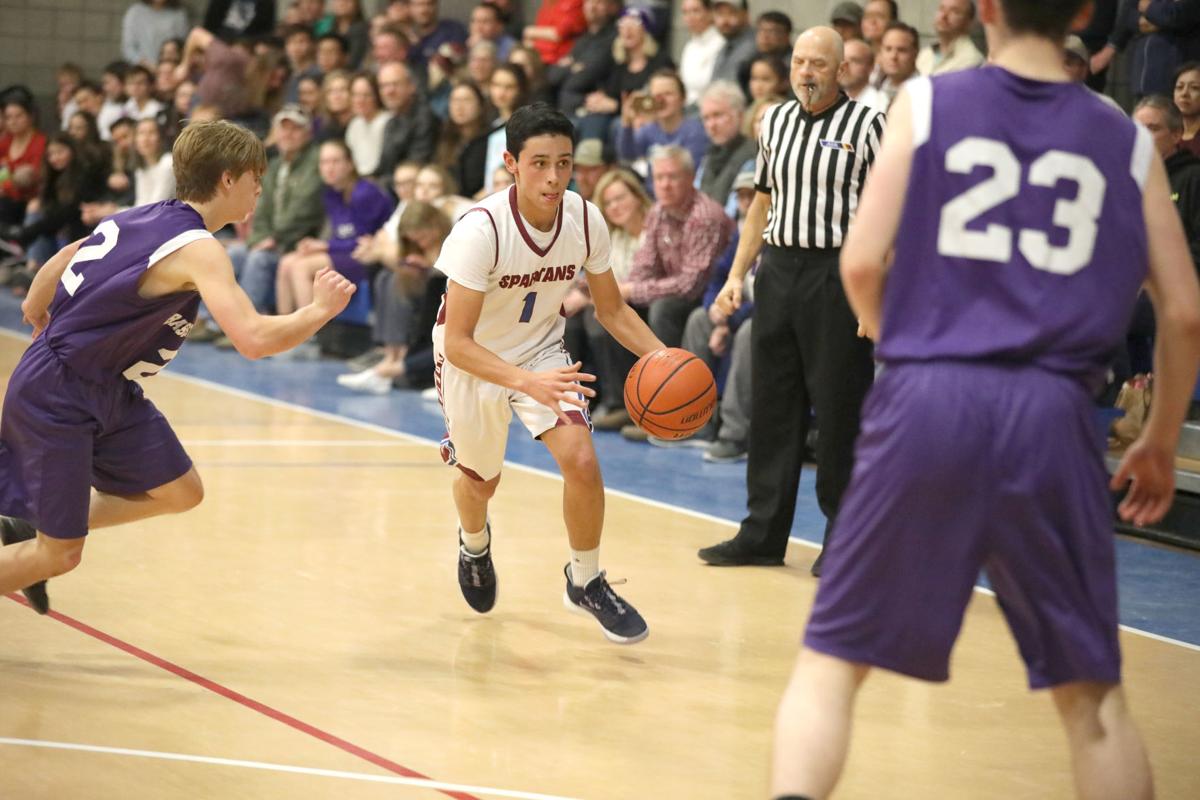 Northland Prep’s Silas Marquez (1) looks for an opening in the Basis Flagstaff defense as he drives the ball Thursday night during a game at Northland Prep Academy.

The 2A Conference Northland Prep Spartans know they are going to get the best out of 1A Basis Flagstaff, adding fuel to the small-school rivalry.

The Spartans, ranked 27th in the 2A entering the night, controlled the Yeti, No. 22 in the 1A, for most of Thursday's game to win 66-39 at home and sweep the season series for the second consecutive year.

The Spartans have won four straight over the Yeti, including the exciting 61-60 overtime win at Basis just over two weeks ago. The last time the Spartans lost to the Yeti was 41-37 at Northland Prep in 2017-18, making it even sweeter for the Spartans to defend their home court with the upset a few years ago still in the back of their minds.

Spartans senior guard Hayden Andersen was just a sophomore when they lost to the Yeti, but he and the rest of the Spartans keep the defeat in mind whenever the rival makes the short drive over to the Spartans' gym.

"We get their best game every single year, so we got to take it seriously," Andersen said. "It seems weird because a while ago they didn't even have a basketball program, but we do take it very seriously because we like that chip on our shoulder that they beat us here one time and we all remember that."

Andersen had another strong game for Northland Prep, now a game above .500 at 7-6, with a team-high 14 points on 6-of-14 shooting from the field, along with 11 rebounds -- eight on the offensive glass -- for the double-double.

Nathaniel Sullivan added in 16 on an efficient 4-of-7 day from the field for Northland Prep. The Yeti, now 6-7 as they dropped below .500 for the first time this season, were led by Marcus Dufek's game-high 17 points as he did all he could with teammate Nick San Souci got into foul trouble early -- as he picked up his third foul of the game early in the second quarter.

The Yeti led the Spartans early in the contest, 10-8, but the lead was short-lived.

The Spartans went on a 10-0 run down the stretch of the first quarter behind a 10-point opener from Andersen to take an 18-10 lead into the second quarter.

"I started the game off a lot stronger than I did last time (against Basis)," Andersen said. "After that they put a good defender on me and gave me a hard time but I felt the team effort -- everybody was playing on their A-game. Last time we were turning the ball over, a little more timid."

From there the Spartans kept building the lead, increasing their advantage to 32-18 at halftime -- building it while San Souci sat with three fouls for almost all of the second quarter.

A strong third quarter pushed the lead even further, essentially icing the game as the Spartans scored 26 points in the quarter. Northland Prep's Isaiah Hanson hit three 3-pointers in the third, including a corner 3 at the buzzer to send the Spartans into the fourth up 58-31.

Hanson finished with 11 points, all in the third.

Northland Prep controlled the glass this time around against the Yeti, unlike last time when the Yeti were able to find room on the glass for put backs.

"This a result of fundamentals, like I said last game," Spartans head coach TJ Harris said. "It was 43-17 on the rebounds, so that is the recipe for success right there."

Coconino receives F for social distancing based off GPS data

Coconino County residents aren't social distancing to the level of residents in other Arizona counties in response to the coronavirus. That's …

Dozens of Flagstaff businesses that have been closed since the night of March 17 will remain so indefinitely.

Celebrating a life in a time with COVID-19

Kathryn Louise Poen, known to many as Katy, loved a good party and lived a life that impacted thousands through a more than 60-year career as …

Although Northern Arizona University continues to operate as the cases of COVID-19 increase in Flagstaff, only a small percentage of students …

Northern Arizona University announced a number of changes to the dining services used by students living on campus on Monday.

Hiking Sedona in the time of coronavirus

Before everything changed, before life as we have known it was put on pause, you would've expected the wildly-popular Bell Rock Trailhead in S…

Coconino County is running out of COVID-19 test kits and without additional supplies from the state and federal governments, it will have to d…

Northland Prep’s Silas Marquez (1) looks for an opening in the Basis Flagstaff defense as he drives the ball Thursday night during a game at Northland Prep Academy.