Become a Member
Read Today's E-edition
Share This
Not in a FEMA flood zone? You may still want flood insurance, local officials say
1 comment
Share this
1 of 2 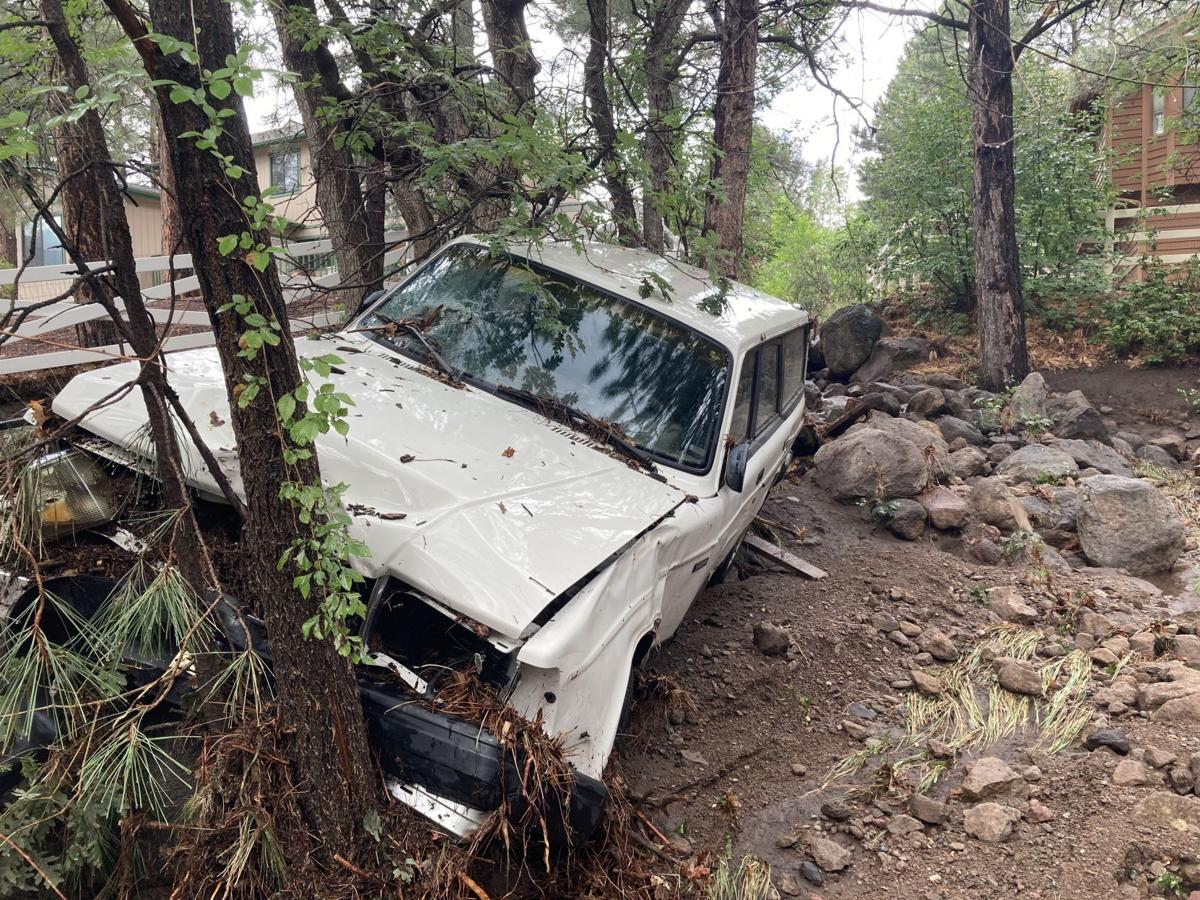 Flood waters sweep away a vehicle from a home on North Forest Brook Street and into the wash just above North Steves Boulevard in this July photo. 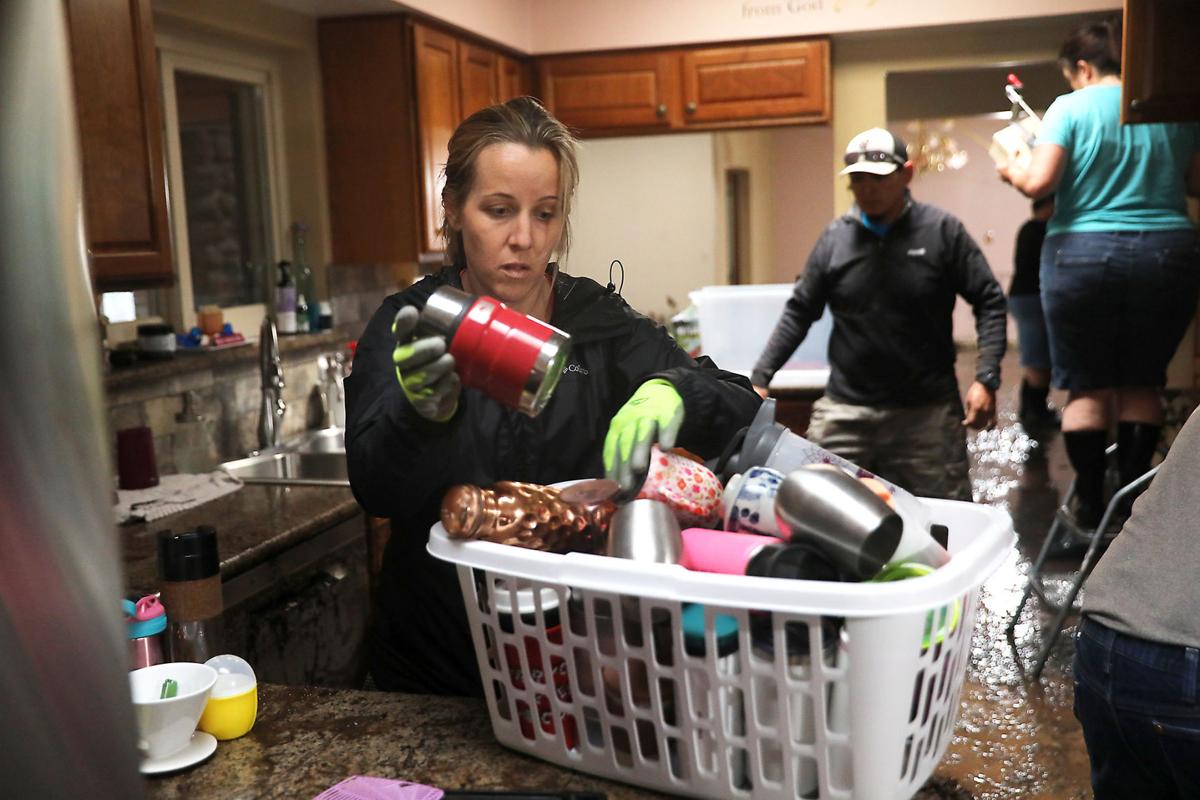 Kathleen Daulton empties kitchen cabinets to save what can be saved Wednesday morning while helping clean up after a massive flood event brought three feet of water and debris into the home of Robert and Joanna Ignace off of Highway 180 last week. More than three inches of rain fell in a short period of time during a huge monsoon storm.

Residents in northern Arizona living outside of an official flood zone still may want to consider purchasing flood insurance.

That was one of the messages from officials during a Monday meeting between the Flagstaff City Council and the Coconino County Board of Supervisors. The meeting came ahead of an engineering summit planned for later this week.

That summit will largely be focused on longer-term mitigation strategies and infrastructure to handle flooding off of the 2019 Museum Fire burn scar that has impacted Flagstaff neighborhoods on the east side of the city several times throughout the monsoon season.

According to a press release, the Coconino County Flood Control District has spent $3.4 million on flood mitigation in the Museum burn scar area, while the City of Flagstaff has spent $1.8 million since July 13.

But officials also spoke to the flood events that residents outside of that area have experienced, which could define the next decade of stormwater priorities for the city and county.

There have been several instances in and around Flagstaff within the last two months in which areas well away from a burn scar have also been flooded by large downpours.

On July 14, water coming off Mount Elden flooded homes and swept cars down streets. Then just last week, another freak storm event dumped a significant amount of rain immediately northwest of Flagstaff, causing flooding throughout the Rio de Flag watershed, destroying at least one home and damaging several others, as well as closing roads.

Being outside the area impacted by Museum Fire flooding, residents impacted by both events were largely caught off guard, without sandbags or flood insurance.

And those flooding events prompted Lucinda Andreani, the deputy county manager, to tell residents they might want to consider purchasing flood insurance even if they live outside of an official FEMA flood zone.

“Unless maybe you're at the very, very, very, very top of a hill, you should strongly consider securing flood insurance. Your homeowners insurance will not cover flood insurance,” Andreani said. “Even people who were flooded this year said, 'I didn't think I was at risk because I'm not in a FEMA flood zone.' But in northern Arizona […] we get these major, intense rainfall events and they can cause flooding just about anywhere at any time.”

City stormwater manager Ed Schenk suggested that planning for these kinds of large flood events could become a real headache for stormwater staff in the coming years, especially as researchers say they are likely to become more common.

Schenk pointed to the most recent Intergovernmental Panel on Climate Change report that states that the Southwest is likely to see more drought and more extreme storms when precipitation does come.

But building infrastructure to mitigate those kinds of storm events is difficult, especially in existing neighborhoods where there is less space to plan and operate within.

“This is a very complex situation just like the Museum flood area, because we've have a pre-developed neighborhood. So we already have streets in place, have houses in place, yards, landscaping,” Schenk said. “So this is going to be very complex in terms of property rights, ownership, easements, et cetera for getting in and actually providing solutions.”

In the wake of the flooding off of Mount Elden last month, Schenk said, the city and county began running additional models of the watershed in that area, a first step ahead of any further possible infrastructure.

Within that watershed, which includes areas of Swiss Manor, Shadow Mountain, and upper and lower Greenlaw Estates, are at least 524 homes and business that could be impacted by further flooding.

Another challenge is that each consecutive flooding event could make addressing the problem more challenging as water dumped by a freak storm scours drainages, Schenk said.

“So instead of flow spreading out through the forest and infiltrating into the ground, or being trapped by organic layer or plants, now we have a very efficient channel that will move water, rocks and debris into the city much, much easier, much faster,” Schenk said. “In fact, you can kind of see some of those scars. If you're driving up Fourth Street and see a new scar halfway up Mount Elden, that was caused during that July 14 event.”

As flooding dragged traffic to a halt across the city and forced classrooms to evacuate at Killip Elementary School on Tuesday, JoAnna Ignace,…

Flood waters sweep away a vehicle from a home on North Forest Brook Street and into the wash just above North Steves Boulevard in this July photo.

Kathleen Daulton empties kitchen cabinets to save what can be saved Wednesday morning while helping clean up after a massive flood event brought three feet of water and debris into the home of Robert and Joanna Ignace off of Highway 180 last week. More than three inches of rain fell in a short period of time during a huge monsoon storm.