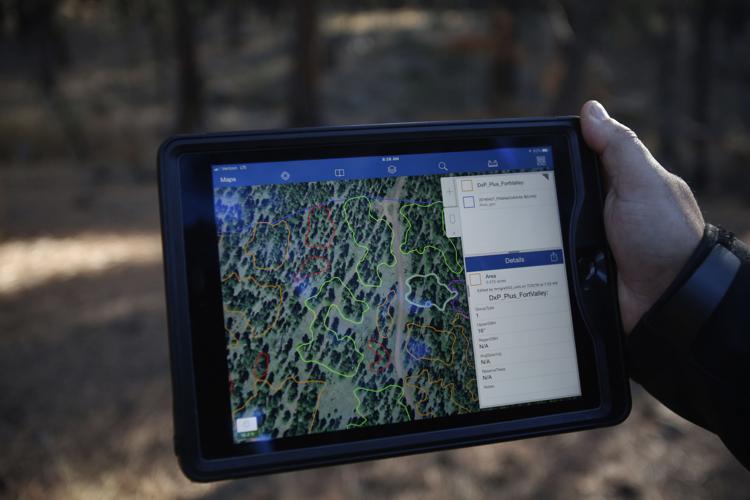 Neil Chapman of The Nature Conservancy, holds a tablet showing a digital map of the forest where he stands. The map shows instructions for how loggers should thin trees in the area. The Nature Conservancy will be testing the tablets in a new partnership with the Forest Service under which the nonprofit will thin 20,000 acres of forest. 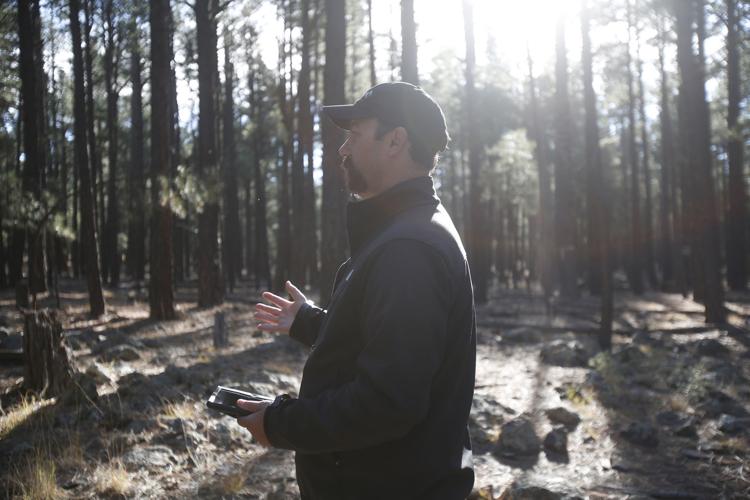 Neil Chapman of The Nature Conservancy walks through a stretch of forest set for thinning under a new partnership between the environmental organization and the Forest Service that aims to help speed up forest restoration in northern Arizona.

Neil Chapman walked through a stretch of ponderosa pine forest near the Fort Valley Trailhead north of Flagstaff Friday morning. Between 150 and 400 trees are crowded into each acre here, which is about three times what fire and forest managers would like to see for a healthy forest.

“This is a pretty dense stand right here. If lightning hit that tree,” Chapman said, pointing to one above his head, “fire would keep going from tree to tree to tree.”

As the northern Arizona program restoration manager for The Nature Conservancy, Chapman is well-versed in the overgrown state of the region’s forests.

The Four Forest Restoration Initiative, or 4FRI, aims to mechanically thin densely packed ponderosa forests like these, with a goal of completing 1 million acres over 20 years in northern Arizona.

But so far, the Forest Service has struggled to get close to the initiative's ambitious 50,000-acres-per-year goal. Over the past year, logging companies have thinned about 13,000 acres.

Now, The Nature Conservancy and the Forest Service hope a new partnership, called the Future Forest program, will help accelerate that pace.

Under the agreement, the nonprofit will thin 20,000 acres over four years. In the process, it will collaborate with the Forest Service on testing new technologies and tweaking processes with the goal of reducing the time and money it takes to prepare the forest for thinning, cut the designated trees and then move wood along to processors. Doing that, the thinking goes, will ramp up forest restoration and attract more wood products businesses to the region that will make use of the felled trees.

“It gives us flexibility, a laboratory to experiment,” Henry Provencio, innovations and efficiencies coordinator with the Forest Service’s 4FRI team, said of the partnership.

The Chimney Springs project, between the Fort Valley Trailhead and the Freidlin Prairie dispersed camping area, is the first place that will see thinning work under the new partnership. Logging equipment should roll into the area over the next week or so.

There, The Nature Conservancy will experiment with, for example, using a computer program that allows the Forest Service to create digital, GPS-connected maps that relay instructions on which trees should be cut and which should be kept. Those maps are transmitted to loggers in the forest who can see exactly where they are in the designated cutting blocks and then track which trees they actually fell.

In most of its timber sales and stewardship contracts, the Forest Service uses a much more time and labor-intensive process of deploying crews to mark trees with different colors of paint indicating “take” trees and “leave” trees. With that system, there’s no efficient way of tracking how loggers carry out cutting instructions.

If the tablet technology appears to work well, the idea is to begin using it on a much broader scale across 4FRI and potentially the nation, Provencio said.

The two parties also may experiment with leaving logs and other biomass like branches and treetops in the forest for longer than Forest Service policies currently permit. That allows more water weight to evaporate before hauling, so more logs can be put on each load.

Another idea is to set up weighing terminals, which all trucks must cross before taking logs to the mill, in more convenient areas of the forest to cut down on the distance trucks have to drive with their cargo, Provencio said.

At some point The Nature Conservancy employees also may take on jobs Forest Service staff usually perform, like sale administration and contracting, he said.

Speeding up the pace of logging activity and making it more consistent is critical not only for restoring the forest but also for attracting more mills and other businesses that can process that wood, Provencio said. Those operations need a steady, dependable stream of logs that hasn’t yet materialized on the west side of 4FRI yet, he said.

Another focus of the Nature Conservancy and the Forest Service be on making it more cost effective to harvest the low-value, small-diameter trees that make up the bulk of what will be removed from the forest, said Patrick Graham, the Nature Conservancy’s state director in Arizona. If they can prove economic viability for those types of trees, that should help attract industry to the area as well, Graham said.

Rohit Tripathi owns the type of wood products businesses that Graham is talking about. The new head of NewPac Fibre in Williams said he is fully onboard with the new Future Forest program thanks in large part to the involvement of the Nature Conservancy.

“I needed someone credible and that is The Nature Conservancy,” Tripathi said. “I imagine them as a catalyst.”

The Nature Conservancy has an agreement with NewPac to take the logs coming off of its thinning projects, the two said.

In the past, the bottleneck has been that the Forest Service wasn’t pushing out enough logs for NewPac’s operations, Tripathi said.

“If everything becomes consistent, I'm ready to put in a $10 million investment next year,” he said.

In an ambitious project like 4FRI, it makes sense for the Forest Service to bring in technologies and private entities to help them, Tripathi said.

Graham said this is the most ambitious project The Nature Conservancy has ever taken on in Arizona and plans to invest several million dollars in the work.

“We're trying to really take a fresh look at all of this and try to figure out how do we responsibly, in an ecologically sustainable way, restore our forests but do it in a way that is economically viable," he said.

When state utility regulators held a workshop last month about increasing the use of forest biomass for power, one topic did not make it into …

Report: Millions forced into extreme poverty while the ultra-rich profited from the pandemic

Starbucks joins McDonald’s and other companies in Russian exodus

Starbucks joins McDonald’s and other companies in Russian exodus 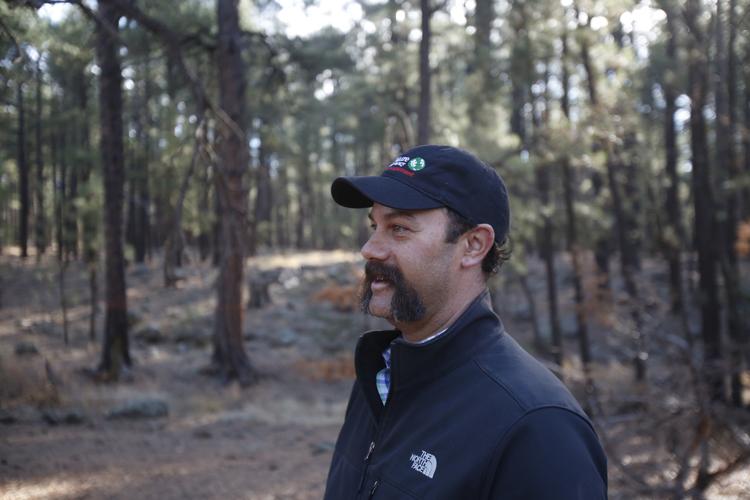 Neil Chapman of The Nature Conservancy, holds a tablet showing a digital map of the forest where he stands. The map shows instructions for how loggers should thin trees in the area. The Nature Conservancy will be testing the tablets in a new partnership with the Forest Service under which the nonprofit will thin 20,000 acres of forest.

Neil Chapman of The Nature Conservancy walks through a stretch of forest set for thinning under a new partnership between the environmental organization and the Forest Service that aims to help speed up forest restoration in northern Arizona. 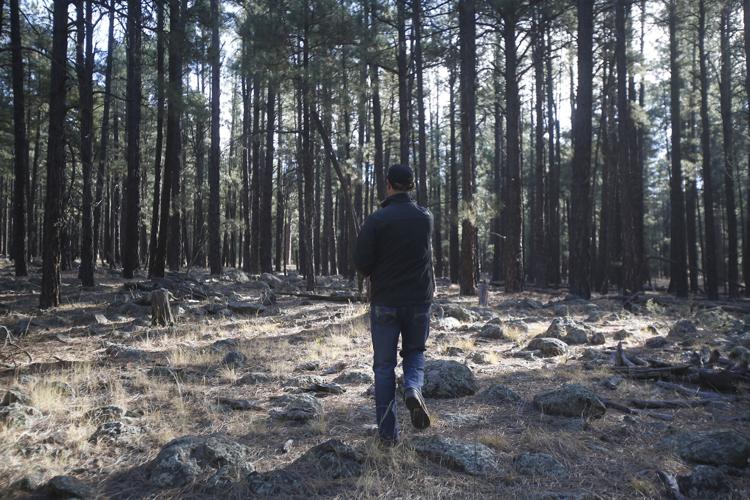 Neil Chapman of The Nature Conservancy, walks through an area of forest north of Flagstaff that will be thinned under a new partnership between the environmental nonprofit and the Forest Service. The thinning will reduce the tree density by about two-thirds in this area.