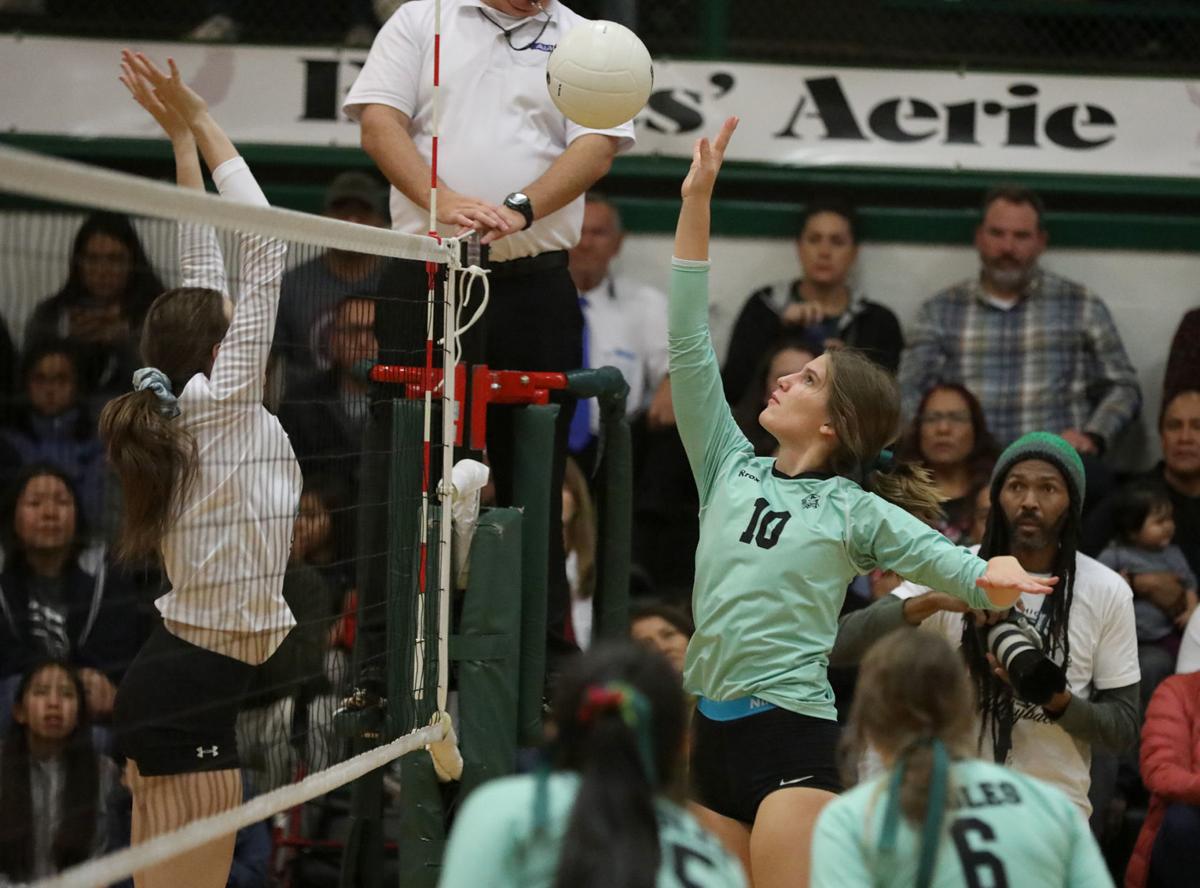 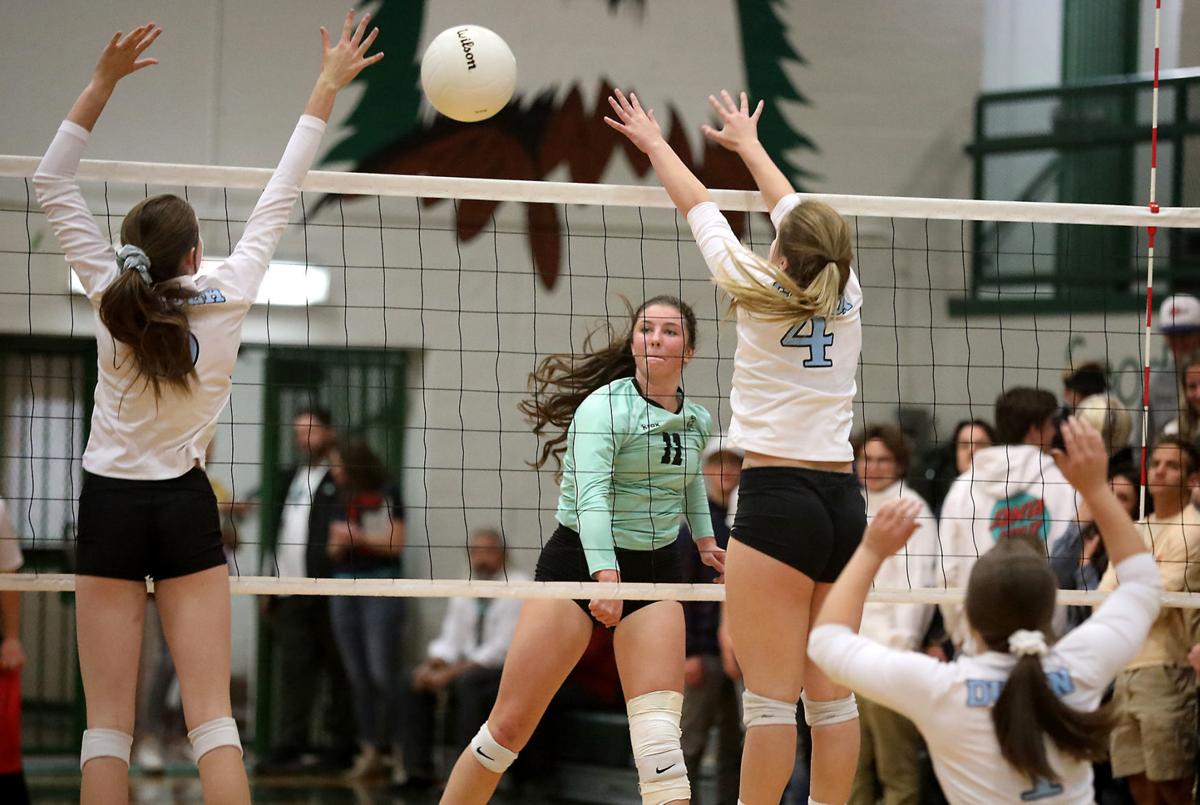 Flagstaff’s Shea Wilson (11) drives the ball through the Cactus defense Tuesday during a match at Flagstaff High School. For more photos of Flagstaff's first-round victory in the 4A Conference state championship tournament, visit azdailysun.com. 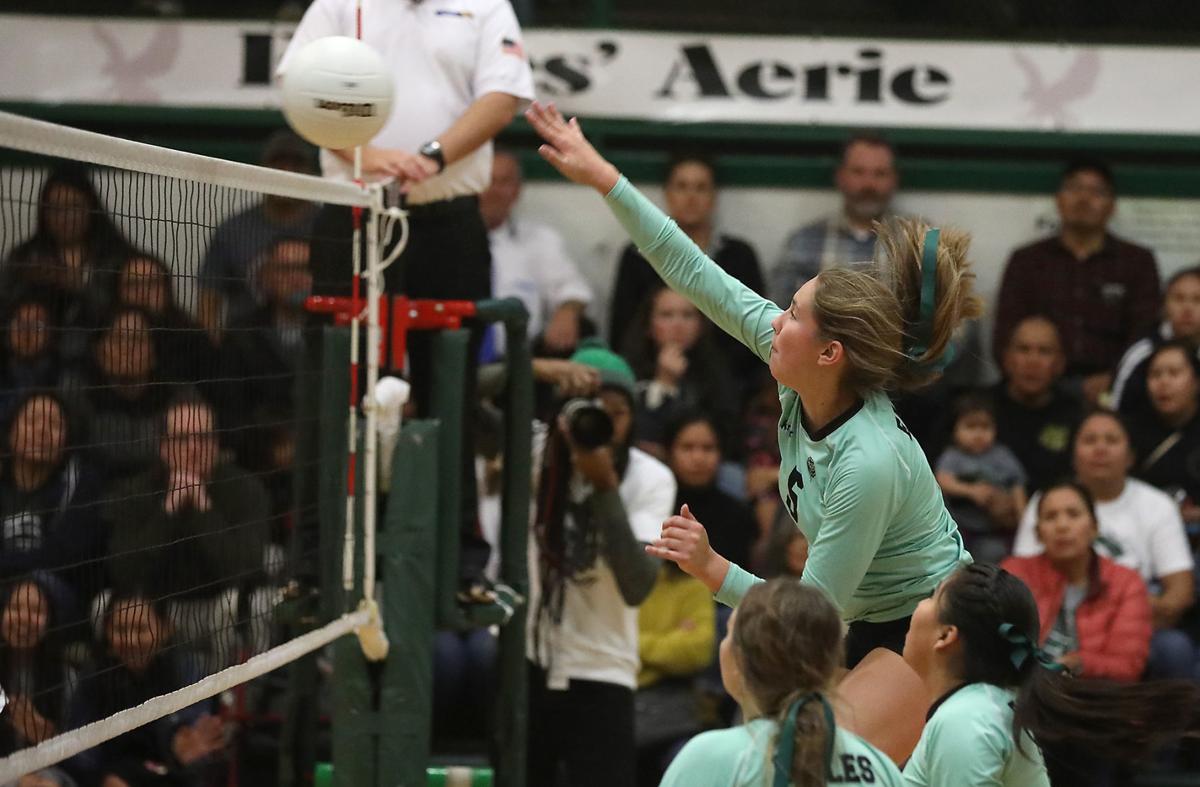 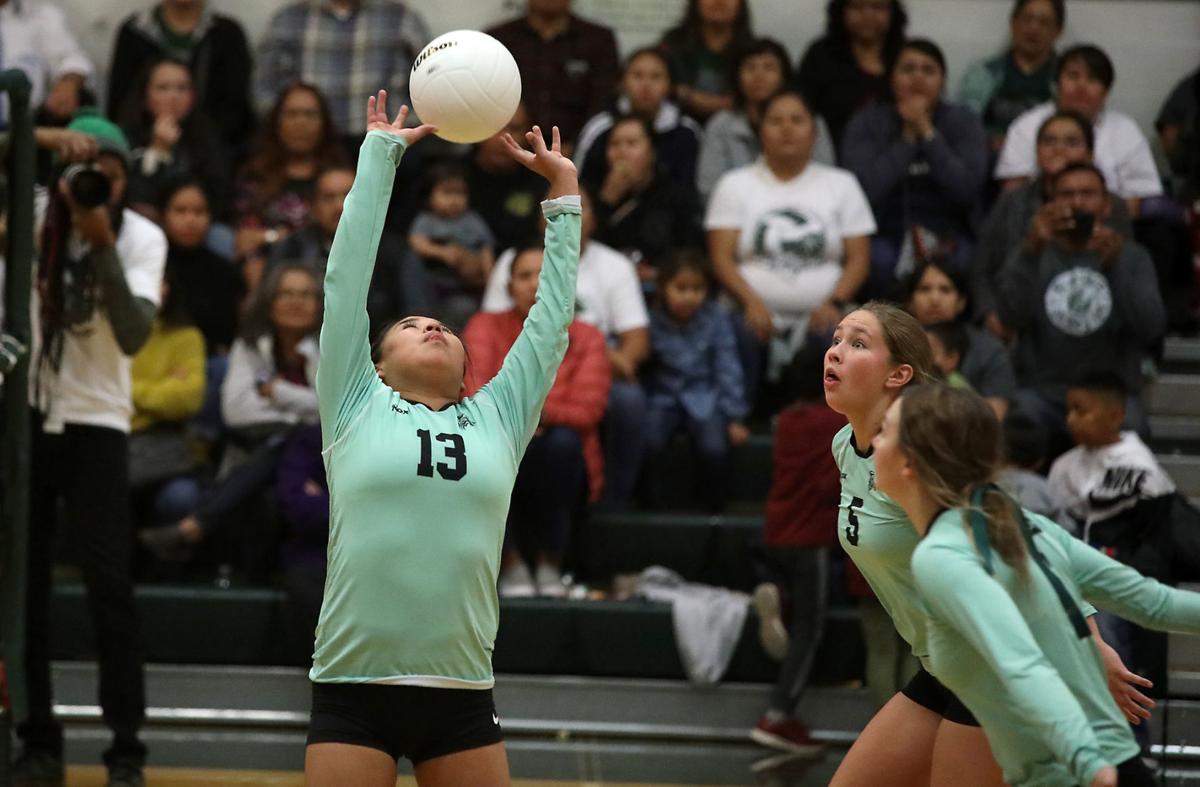 Flagstaff’s Devynn Hatathlie (13) sets the ball for teammate Bridget Bond (5) Tuesday at Flagstaff High School during a match against Cactus in the first round of the 4A Conference state championship tournament. 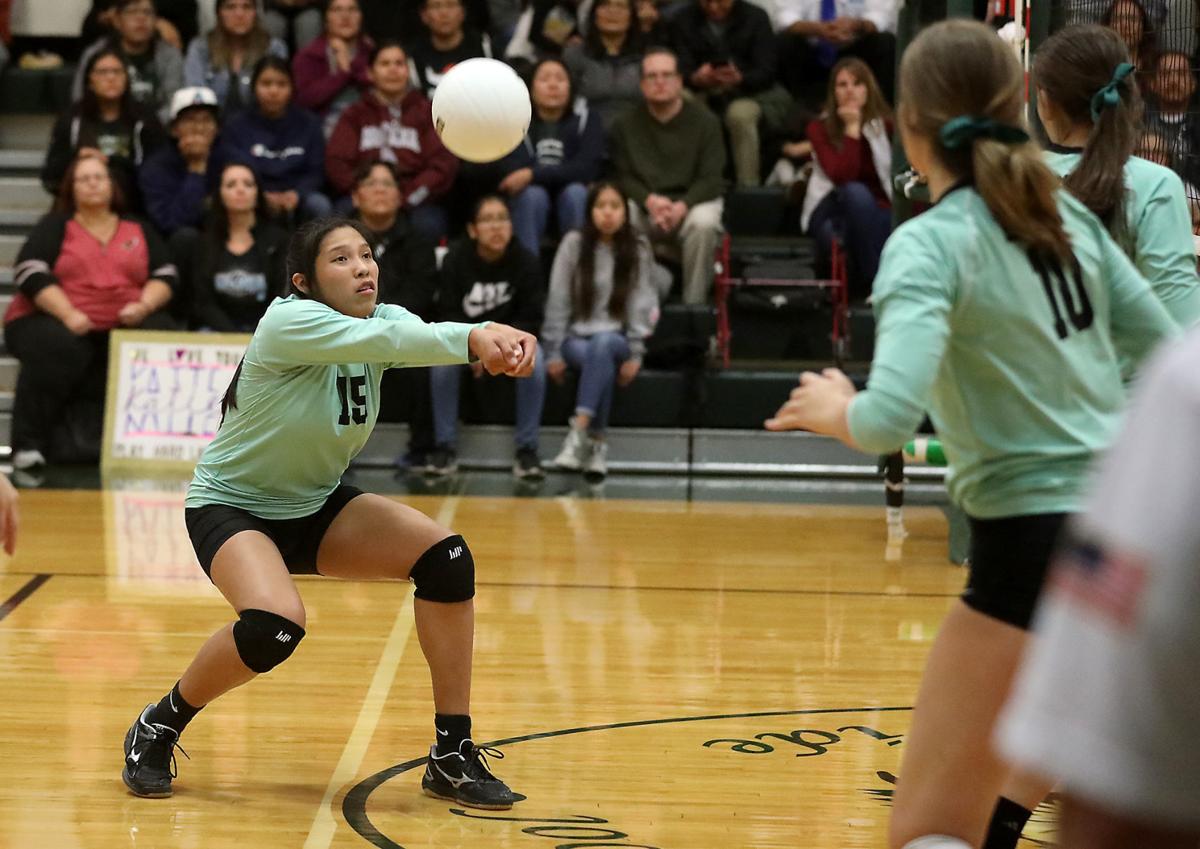 Flagstaff’s Gracelyn Nez (15) digs the ball during a match against Cactus Tuesday at Flagstaff High School. 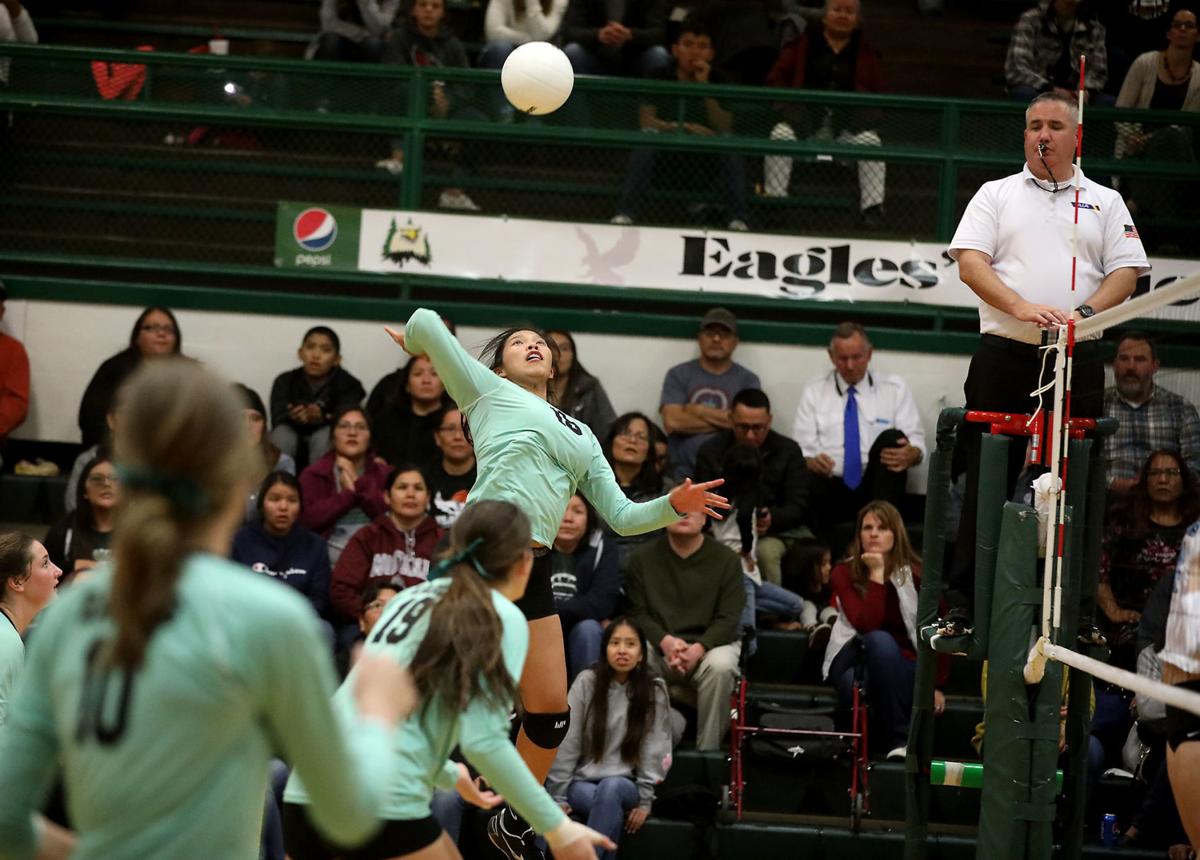 The third-seeded Flagstaff Eagles got needed production while star Gracelyn Nez was keyed on in Tuesday's first-round 4A Conference state tournament match.

The 14th-seeded Cactus Cobras tossed three blockers at times at Nez, but the Eagles were bolstered by Alyssa Prager and Bridget Bond in the middle, helping Flagstaff take a 25-21, 25-21, 25-17, victory over the Cobras at Flagstaff High School.

Prager finished her night with eight kills, four blocks and a pair of timely aces for the Eagles, and Bond kept the offense moving with 18 assists, three kills and four aces.

"I thought it was awesome because (Cactus') defense and blocking scheme made it so at times there were three blockers all the way over to block Gracelyn," Eagles head coach Beth Haglin said. "It was really neat to see our middles step up. ... They had to respect our other hitters and it was nice to see that because they were just keying on Gracelyn."

Nez was held in check as she finished with nine kills and six digs, but Haglin was still impressed with the way she picked her spots and worked against the Cactus defense.

"Gracelyn is just a very intelligent hitter, so even though they had other people on her she was roll-shotting it in good spots, hitting in line at good spots," Haglin said. "Her backrow attack was awesome tonight; she had like three really just killer hits from there."

The Eagles and Cobras were locked in a tight first set early on, getting out to a 14-all tie. Nez ignited a quick burst to get the Eagles ahead 19-16 as the home squad kept its lead after figuring out the Cactus block.

Cactus had the Eagles' number early in the set, keeping the Flagstaff attack off-tempo. The second set was much of the same, with Cactus keeping it close to a 19-all tie before Flagstaff ignited a run to close the set behind a kill from Shea Wilson.

The Eagles jumped ahead in the third set, getting out to a 18-13 lead and capped off the set with an ace to secure the sweep.

Haglin was named the Grand Canyon Region Coach of the Year for the third straight season, while Nez earned offensive player of the season honors.

Eagles libero Paetyn Nakai was named the region defensive player of the year as well. She showed why against the Cobras, keeping plays alive as she finished with 21 digs.

"She had twice as many digs as everyone else, she's all over the court," Haglin said. "What she does is insane."

Nez, Nakai and Devynn Hatathlie were named to the All-Region First-Team while Bond was the lone Eagles with second-team honors. Prager and Wilson were named as honorable mentions.

The Eagles will square off against sixth-seeded Bradshaw Mountain on Thursday at Flagstaff High School.

The Bears took a 3-1 win over 11th-seeded Mesquite Tuesday, and could be a tough out for the Eagles.

Bradshaw took the Eagles to five-set matches both times the teams squared off during the regular season. While Flagstaff did win both matches, Haglin said her team needs to be ready for the challenge the Bears will bring.

"They're a really good team. Karrie Platt is doing a great job for them as a new head coach," Haglin said. "They're very disciplined, they're scrappy. We are gonna have to step up our game, step up our defense and blocking too."

Thursday's match is set for 6:30 p.m. at Flagstaff High School.

Flagstaff’s Shea Wilson (11) drives the ball through the Cactus defense Tuesday during a match at Flagstaff High School. For more photos of Flagstaff's first-round victory in the 4A Conference state championship tournament, visit azdailysun.com.

Flagstaff’s Devynn Hatathlie (13) sets the ball for teammate Bridget Bond (5) Tuesday at Flagstaff High School during a match against Cactus in the first round of the 4A Conference state championship tournament.

Flagstaff’s Gracelyn Nez (15) digs the ball during a match against Cactus Tuesday at Flagstaff High School.