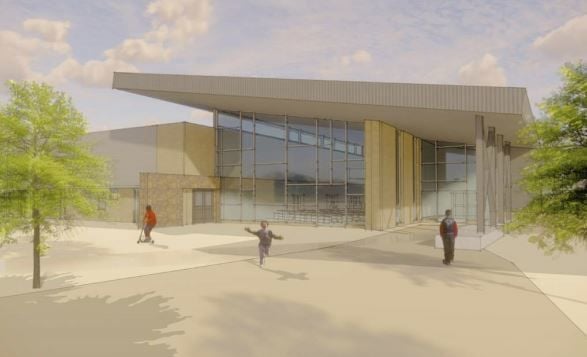 This image, shared by design firm DLR group with the FUSD Governing Board Tuesday, shows the design for the front entrance of the new Killip Elementary School.

This image, shared by design firm DLR group with the FUSD Governing Board Tuesday, shows the proposed entrance to the kindergarten and preschool area of the new Killip Elementary School.

Designs for the new Killip Elementary School are on their way toward finalization, with construction plans next on the list of tasks needed to prepare for a groundbreaking in March.

This summer, DLR Group gathered public comments including through a virtual community meeting to help guide the design process.

CORE Construction, which has been involved locally in the creation of many of the newer buildings on the Northern Arizona University campus, has been selected to build the new elementary school.

The goal is to have all plans for the project finalized by early February in preparation for the start of construction in March.

During a special session with the FUSD Governing Board Tuesday afternoon, DLR Group presented its latest designs for the new school, which emphasize shared, collaborative spaces for students and community members.

The new building, which designers likened to the exterior style of the Flagstaff Aquaplex, will be constructed on the eastern side of the property -- where the school field is currently located -- to allow for construction to happen while school is in session. A portion of Killip’s current western wall will be saved and topped with fencing to become a boundary for a new baseball field.

“One of the things that’s really interesting about architecture is that it’s really rooted in a place as well as the people, and so we thought it was important to address two things: the neighborhood, from a social aspect, and the innate human naturalness, too, that we want to feel close to nature,” said DLR Group’s David Schmidt, architect for K-12 projects, who explained the new building has been oriented to provide ideal views of Mount Elden and Humphreys Peak.

The design calls for the creation of a new parking lot and walkway from the intersection of Third Street and Sixth Avenue to the school’s entry plaza, where community events can take place. A neighborhood trail will also be created on the north end of the property, outside the school fence, to connect First Street and Third Street. When school is not in session, a gate will provide community access to the school’s baseball and soccer fields through an adjacent “neighborhood civic space.”

The building is one story, but has two levels — which will be separated by four steps and a ramp — to account for the slope of the property, which Schmidt said equates to about a 20-foot difference between the north and south sides of the future building. He said creating these two levels will reduce expenses of leveling the site, provide some protection for the upper level of the building in case of runoff from the mountain and also allows for the easy creation of a stage within the school.

Schmidt described the building’s layout as a pinwheel, with the cafeteria and commons as the anchors around which the classrooms, administrative offices and athletic spaces are located.

Each grade will have three classrooms that are broken into four areas by color scheme and other design elements. Interior designer Sarah Brandstein described this conceptually as breaking the school into different lands, as would be seen on a map for a fantasy world.

“We wanted to create spaces that tie into the imagination that really let the children create meanings of their own while also creating different lands within the school -- which will help with wayfinding and understanding where you are in the building,” Brandstein said during the presentation Tuesday.

Preschool and kindergarten are together on the eastern side of the building, in an area that has its own entrance, while first through third grade is located at the north end, and fourth and fifth grade are at the west end.

This layout leaves room for collaborative “maker spaces” and small group meeting rooms between classrooms, as well as what designers are calling the Creative Commons, a sort of blend between maker spaces and a traditional library that connects to the cafeteria.

Brandstein said classrooms will have windows looking out into the maker space, but they will be covered with glazing film and located above eye level when students are seated to prevent distraction. Entrances to each of the three classrooms per grade will meet at a center point that allows one person to be able to see into all three classrooms in the event that one teacher needs to step away for a minute.

“The great thing about this configuration is that it allows for a lot of visibility not only to the maker space but also between the classrooms. … It really allows for great teamwork between these groups of three,” Brandstein said.

DLR Group is also aiming to recreate some of the existing spaces at Killip in the new school area, including its pond and garden. Designers will be working with the community and school groups that use these spaces to determine how much involvement they will have in the reconstruction alongside CORE.

Additional community involvement is also anticipated for the school playground, as well as art and other graphics that will be displayed throughout the school when its construction is complete.

“We think it’s something the entire district community and Flagstaff community will be proud of when we get to the end,” FUSD Superintendent Michael Penca said.

Probe shows WHO knew of sex claims in Congo

US calls for deescalation in Gaza

US calls for deescalation in Gaza

Flagstaff Unified School District students will continue online learning through at least Jan. 5 following a vote by the governing board Tuesd…

Denetsosie Gishie, Fredericks, Gilmore to join FUSD board for next term

Taking its own approach to community STEM events, Killip Elementary School held its inaugural “We Love STEM!” Night on Thursday, which drew in…

Sandy Moffitt and Tim Foster said they are still scared to go to the grocery store. Moffitt said she can’t catch COVID-19 or let anything happ…

Cooking supplies. Lab equipment. Furniture. When Flagstaff educators Taylor Doren, Tom Talasek and Leah Claypool were asked to share their classroom wish, these are the things they asked for — and what they will be able to purchase using $2,500 in grant funding they were each awarded last week.

Two years ago, Northern Arizona University student Maya Motomura did what she could to get her foot in the door of a local elementary school. …

This image, shared by design firm DLR group with the FUSD Governing Board Tuesday, shows the design for the front entrance of the new Killip Elementary School.

This image, shared by design firm DLR group with the FUSD Governing Board Tuesday, shows the proposed entrance to the kindergarten and preschool area of the new Killip Elementary School. 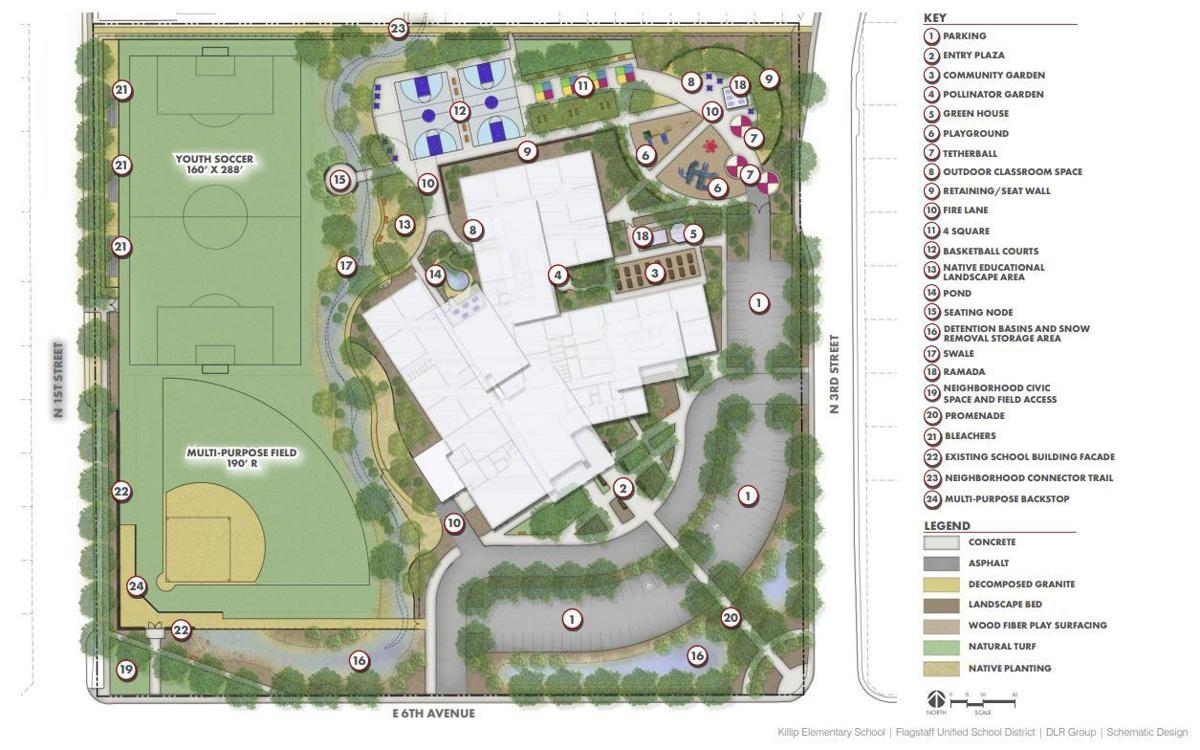 This image, shared by design firm DLR group with the FUSD Governing Board Tuesday, shows the landscape design for the new school. 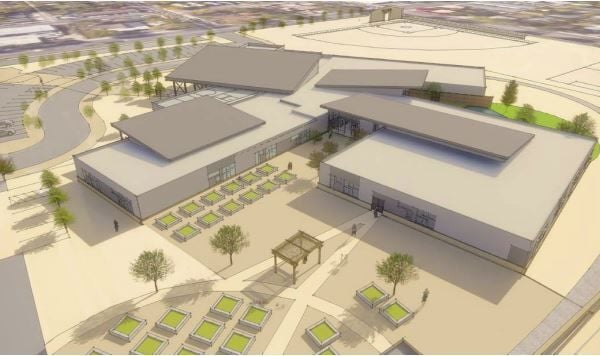 This image, shared by design firm DLR group with the FUSD Governing Board Tuesday, shows an aerial view of a concept for new Killip Elementary School garden boxes. 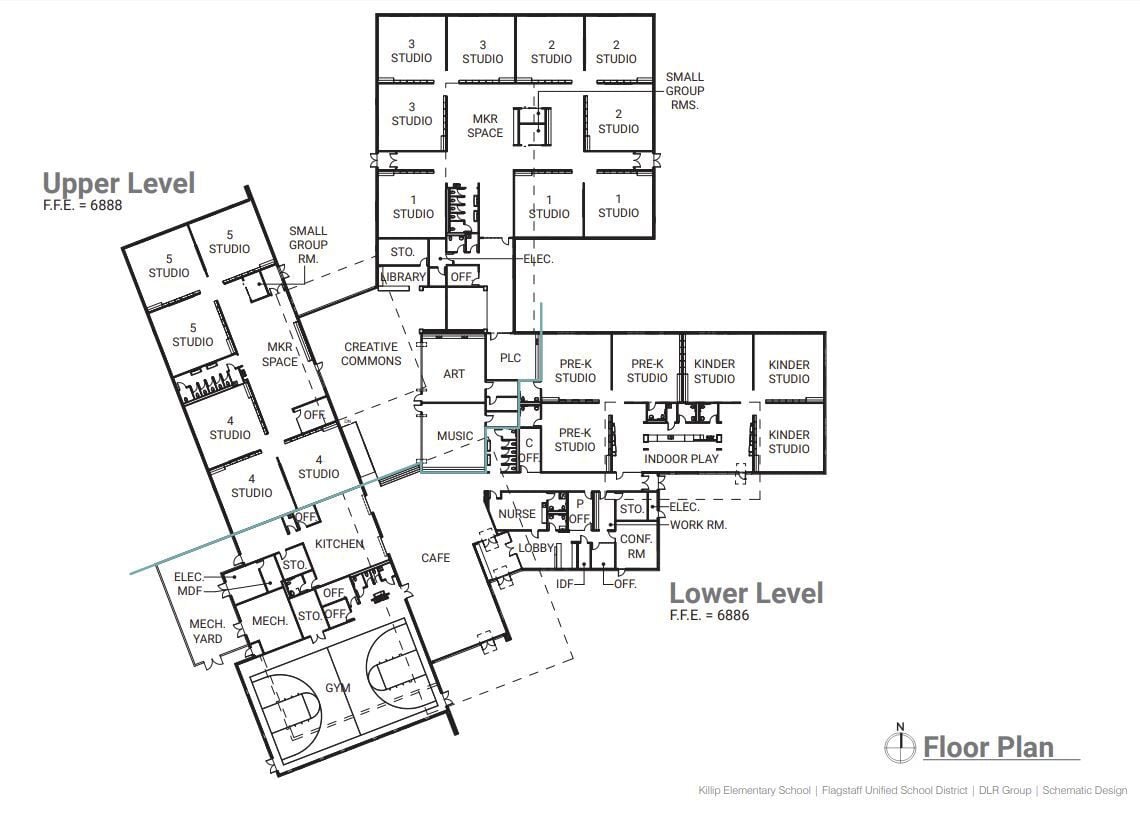 The floor plan of the proposed design for the new Killip Elementary School, as presented by design firm DLR group with the FUSD Governing Board Tuesday.