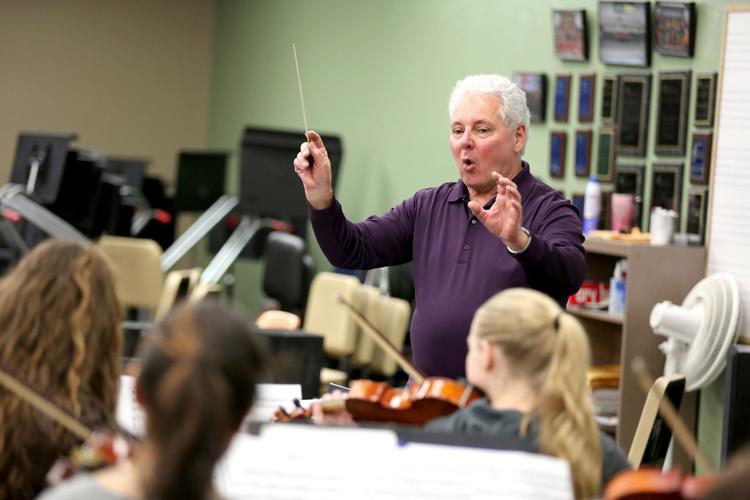 David Cripps, who played the horn on the original "Star Wars" soundtrack under legendary composer and conductor John Williams, conducts during an orchestra class at Flagstaff High School Monday morning. 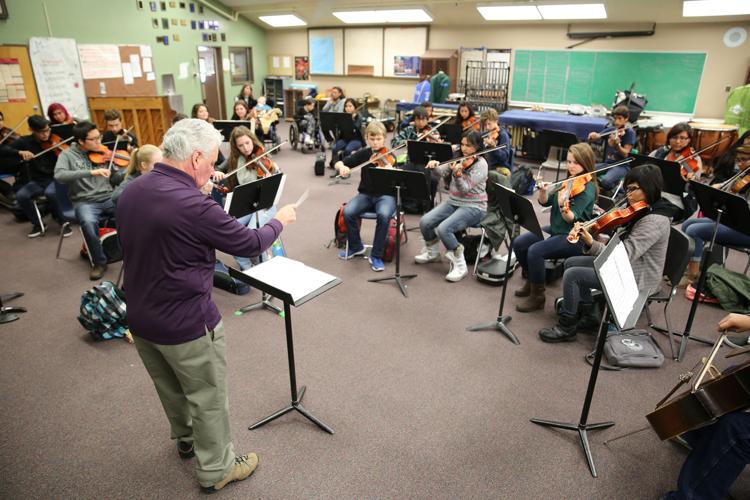 David Cripps may now be the Flagstaff High School orchestra teacher, but the celebrated horn player still gets asked about another performance, a long, long time ago, in a galaxy far, far away.

“Carrie Fisher thinks she was Princess Leia,” Cripps joked. “But really, it’s me.”

Cripps played the lead horn in the London Symphony Orchestra under Grammy-winning composer John Williams when the score for Star Wars was recorded. All of the horn solo parts in the three original Star Wars movies were played by Cripps, including “Princess Leia’s Theme.” Cripps also played in the three original “Superman” movies, also composed by Williams.

He was hired at FHS at the beginning of January, after the former orchestra teacher resigned the position. Tony Cullen, the school’s principal, asked Cripps, who is also a bus driver in the school district, to take the job.

Cripps said it did not take long for the students to learn about their teacher’s famous past.

“On the first day, Tony sat in on the class and told them all about me,” Cripps said.

Cripps came to Flagstaff in 2003 after seeking a full-time teaching position as a horn instructor. The only opening he found was at Northern Arizona University, so the British musician decided to move to Flagstaff to teach. He later met his wife, Melissa, and formed Orchestra Northern Arizona, which now includes about 65 musicians ranging from high school students to adults in their 80s.

Despite years of a lucrative music career, including traveling the globe and performing with famous musicians, Cripps said, when he is in the United States, he always gets asked about “Star Wars.”

All of the questions about the movie are a little ironic for Cripps, who is not a fan of science fiction movies. As a benefit of playing in the symphony, he received tickets to the London movie premiere when the original film was first made. He gave them away.

Cripps has not even seen the newest episode yet.

“My stepson gave me the soundtrack for Christmas,” he said. “I’m interested to hear the music.”

He said he had not gotten around to listening to the soundtrack by early January because he said he tends to prefer classical music. However, he said he likes to see the enthusiasm that fans have for the movie.

“I think it’s very sweet that it’s taken off like it did,” Cripps said.

Now, Cripps is content with teaching high school students and fostering a love for playing music.

“People who have had the kind of career and success that I have should teach and generate enthusiasm at this level,” he said. “I’ve had so many wonderful experiences all over the world. The journey has been fun every minute of the way. If I can share that with young people, then it’s worthwhile.”

Despite the expansion of the franchise, which now includes movies that do not have Cripps’ performances, he said he does not have any feelings of loss toward the newer movies without his music.

“I was the first to play it, and I was the only person to ever play it,” he said. “No one can take that from me.”

A Jedi Apprentice in Basic, or Jedi in Training, referred to as a Force-sensitive adolescent who had begun one-on-one instruction with a Jedi Knight or Master outside of the Jedi academy.

More than $20,000 worth of jewelry stolen in Flagstaff as police investigation into string of burglaries ongoing

Police are working to track down burglars after more than $20,000 worth of jewelry was stolen from Switzer Mesa home.

“Right when I walked in, I knew it wasn't going to be good,” said Megan Buck, resident of the new "luxury" apartments known as Elara at The Sawmill.

A public memorial service for Yeon-Su Kim and Corey Allen is scheduled for Saturday at 1 p.m.

Flagstaff police warn car break-ins are on the rise

Auto-burglaries accounted for 15% of the felony incidents police responded to this weekend. As Flagstaff Police warn residents about vehicle break-ins, you might be surprised where they're happening most.

David Cripps, who played the horn on the original "Star Wars" soundtrack under legendary composer and conductor John Williams, conducts during an orchestra class at Flagstaff High School Monday morning.