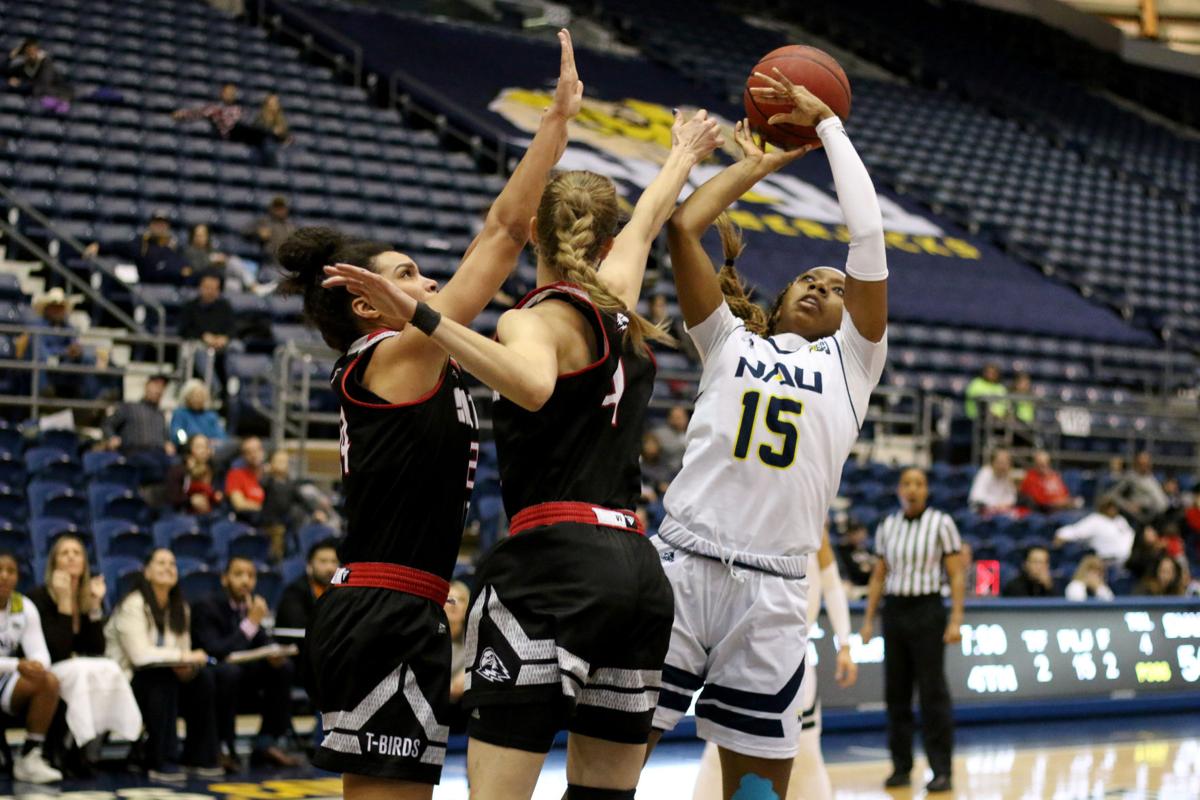 In this January 2019 file photo, Northern Arizona Lumberjacks forward Khiarica Rasheed (15) pulls up for a jumper against a pair of Southern Utah defenders in the Walkup Skydome.

The Lumberjacks had their most successful season in over a decade, going 16-15 overall, the program’s most wins since 2006-07, and it finished 12-8 in the Big Sky Conference, the most since 1997-98. Since Payne was hired in 2017, the Lumberjacks have upped their win total each year since posting eight wins in her first season in 2017-18 to 12 the next and 16 last year.

If that trend of a four-win improvement keeps up, Northern Arizona could be looking at a 20-win season.

The Lumberjacks were picked fourth in the Big Sky preseason media and coaches' polls, squarely in contention with other top teams Montana State, Idaho and Idaho State.

If there was any year for a run at a Big Sky title for the Lumberjacks, this would be it.

"We kinda knew by year four or year five we would have things close to where we wanted it to be," Payne said Thursday during a phone interview. "Obviously (COVID-19) has made a few challenges with opt-outs and health concerns all the way around, so it will definitely be a different dynamic. We're not exactly the same team we were last year. I think we have improved in some areas, but not having the ability to work with our kids much in the offseason has been challenging. But that's all the way around."

With Big Sky preseason MVP Khiarica Rasheed leading one of the most experience teams in the Big Sky -- and one that brings back four of five starters from last season -- it's hard not to see the momentum from a year ago spilling into this season.

The star power with Rasheed, who averaged 16.5 points on 49% shooting from the field and 47% shooting -- on 36 tries -- from 3-point range and 7.2 rebounds per game for the entire season, is there. The depth is there, too, with guards such as Lauren Orndoff and Regan Schenk along with high-scoring wings Jacey Bailey and Nina Radford.

That depth and continuity from a season ago, Payne noted, has helped the team weather the lack of in-person work during the offseason because of the COVID-19 pandemic.

Of course the pandemic looms over all sports. There's already been a number of college basketball programs that have paused workouts due to COVID-19 exposures.

"(We are) cautiously optimistic with everything going on right now," Payne said. "We understand that there's probably going to be some disruptions. What does that look like? Nobody knows. So for us we are taking it one day at a time with practice and are really looking forward to get to play here in two weeks."

There's a name on the Lumberjacks roster that high school basketball fans in Flagstaff will be excited to see.

Nakai could break into Payne's lineup as a versatile combo guard, along with other newcomer Miki'ala Maio, also a Nevada transfer, if her waiver to play is accepted by the NCAA.

The Lumberjacks also have three freshmen in twins Nyah and Olivia Moran and Shira Patton.

"Regan was coming off the bench as a point guard; she's going to get big minutes," Payne said. "She's taken her game to the next level."

The Lumberjacks are scheduled to open the season at UNLV Wednesday, Nov. 25. All games are subject to cancellations due to COVID-19 testing and if a team gets exposed -- which would force a two-week shutdown, according to NCAA guidelines.

SUNDAY FEATURE: For this Flagstaff retiree, the Buck stops wherever fires pop up

Back home in Flagstaff, retirement resumed, Buck Wickham looks none the worse for wear. Another fire season will come, soon enough, and he will sure as heck be there once more in the midst of the action. But for now, Buck in winter is content to dust off his golf clubs, scratch his beloved Aussie Shepherd, Bessie, behind the ears, trade his cowboy boots for hiking boots or, really, just chill and reflect on another hot, dry summer on the front lines now safely in the books.

In this January 2019 file photo, Northern Arizona Lumberjacks forward Khiarica Rasheed (15) pulls up for a jumper against a pair of Southern Utah defenders in the Walkup Skydome.