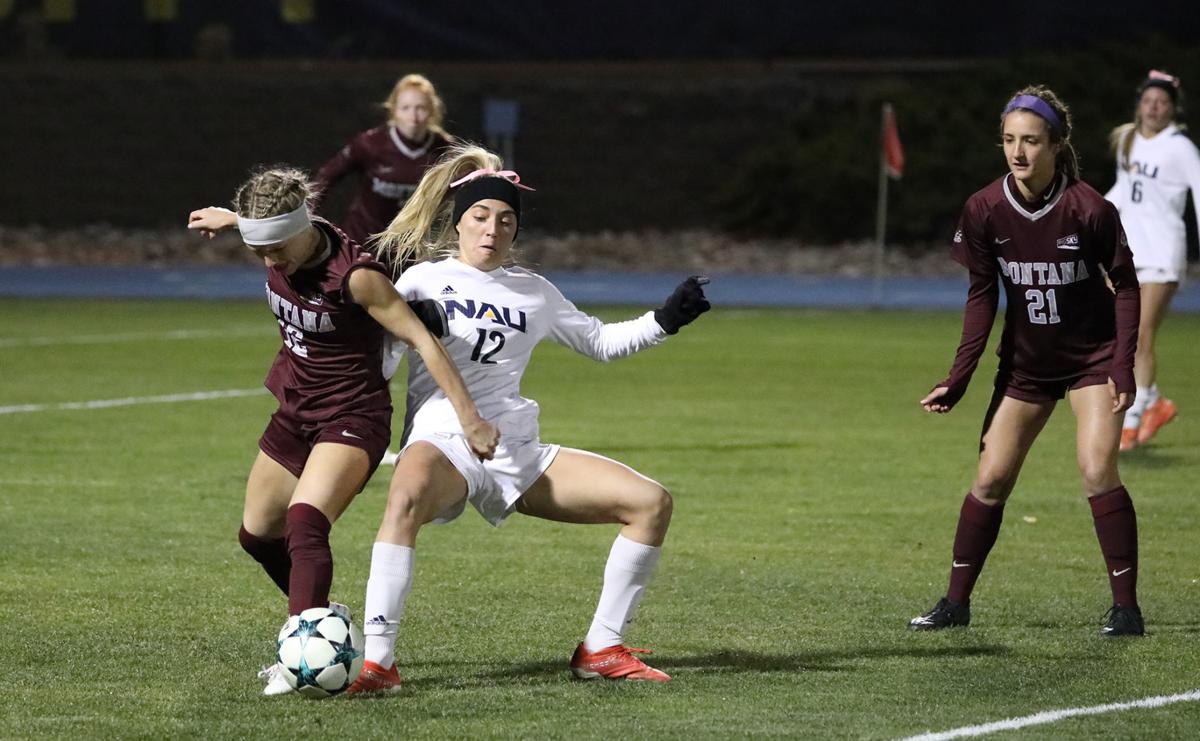 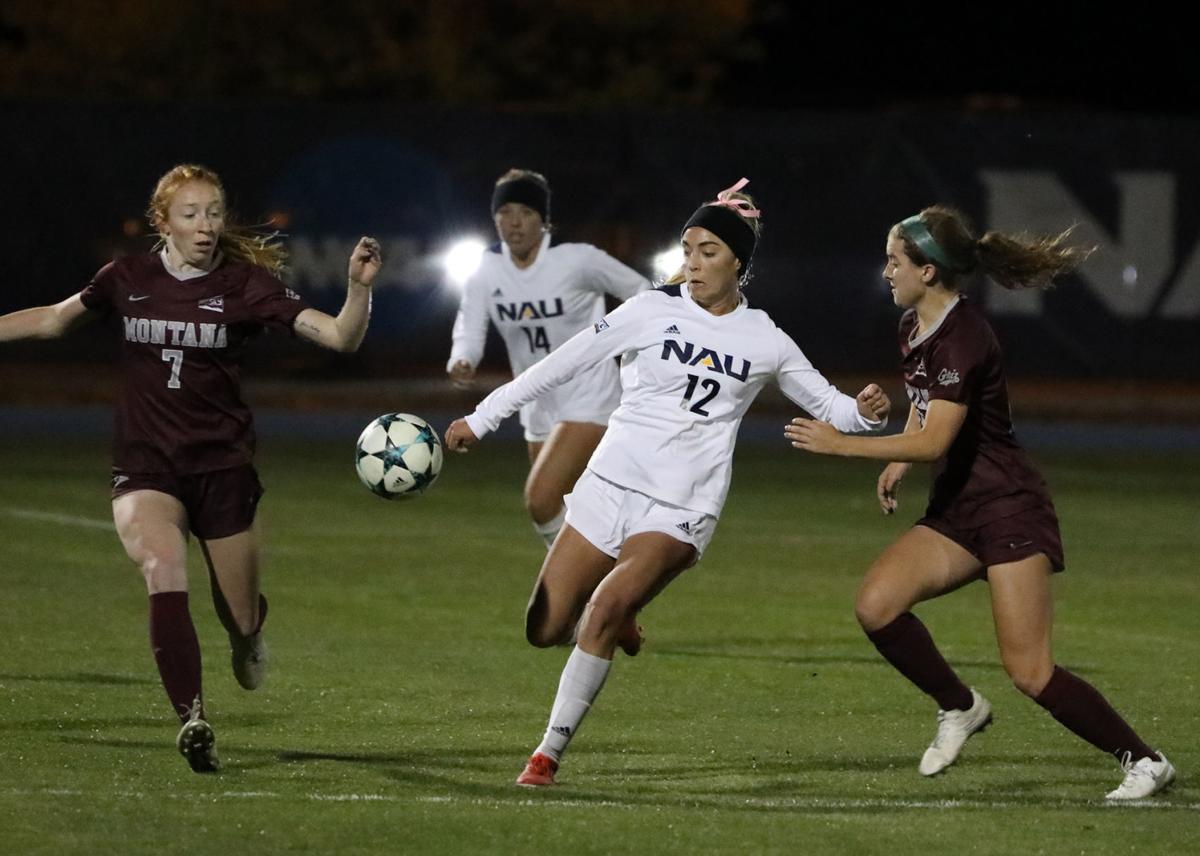 Northern Arizona's Paige Maling (12) connects with the ball Friday night during a home match against Montana at Lumberjack Stadium. 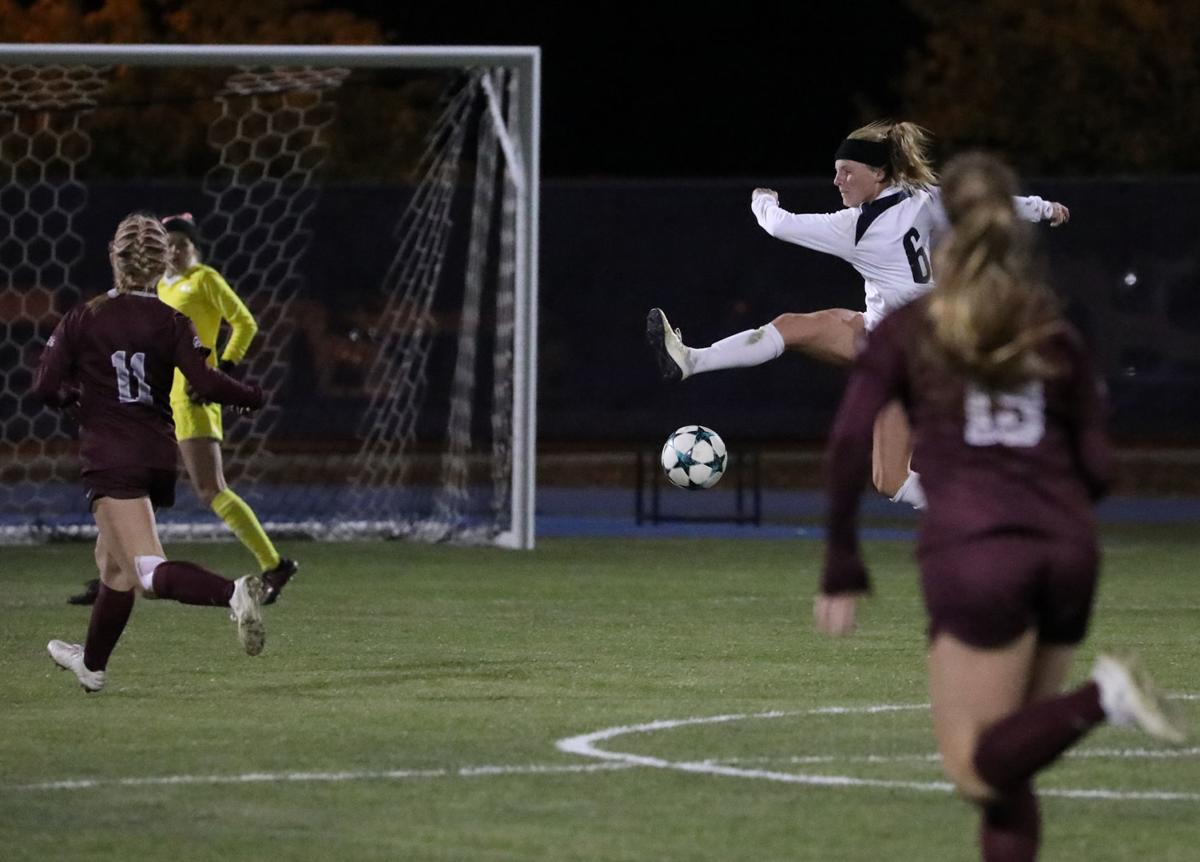 Northern Arizona's Madison Montgomery (6) connects with the ball in to clear the ball Friday night during a match against Montana at Lumberjack Stadium.

Entering Friday night, first-year Northern Arizona soccer head coach Kylie Louw had the Lumberjacks attacking at one of the highest clips in the Big Sky , and in recent memory for the program.

The offense entering the Lumberjacks' match against the Montana Grizzlies led the conference in shots at 178, shots per game at 14.83, and second in goals at 17 through 12 games this season.

Louw wasn't discouraged by the loss and lack of production on offense after being held scoreless for two straight games, saying after the contest that the offense will come around and that she and her coaching staff need to start adjusting better to defenses.

It took nearly 70 minutes to break the scoring seal. Montana's Alexa Coyle eventually got her head on a free kick from about 20 yards out, placing the ball just past Northern Arizona goalkeeper Taryn Benham to give the Griz the decider with about 20 minutes left to play.

Louw wasn't all that upset about the goal. Coyle, who is listed at 5-foot-10, just skied over the Lumberjacks' defense to get her head on the ball.

"Credit to them; that's a hard goal to score on and she scored it," Louw said. " ... If we force them to score like that then we did a good job. That's why I'm in high spirits. We're growing and we're building, but every single person has said this team grinds and they work hard."

The Northern Arizona offense couldn't find much room to work against Montana's defense, which kept forcing the Lumberjacks to the perimeter -- keeping them from getting much going in the middle.

"Basically, they play a little bit of a hybrid. Their holding mid-drops in and so they stay in a bunch of five or six players," Louw said of Montana's defense. "They want you to penetrate wide, so we thought that maybe we could fall for that and started the second half saying we have to play it wide every now and again. ... We knew it was really hard to penetrate their backline."

Montana wasn't doing much on the offensive end, either. The Griz only had one shot that had a chance at the goal. Coyle broke off on a breakaway, beating Benham to leave the net empty.

Northern Arizona defender Amanda Bennett came flying through to deflect the shot attempt out of bounds to keep the game tied.

Later, about eight minutes into the second half, Madison Montgomery broke in front of a Griz attacker who took a through ball into the box looking for her chance at net until Montgomery broke the play up to force a goalie kick.

Here comes the bride? Not so fast during the pandemic in Flagstaff

They were married in the sterile, but judicious, environs of the Coconino County Courthouse — nary a flower in sight and certainly no harpist …

Slowly and hesitantly, as Flagstaff emerges from the COVID-19 lockdown, religious congregations are taking tentative steps to resume in-person…

On a chilly pre-dawn morning, Molly Brown pulled into Dr. John “Bull” Durham’s Flagstaff driveway and started to load her truck with six-foot-…

Northern Arizona's Paige Maling (12) connects with the ball Friday night during a home match against Montana at Lumberjack Stadium.

Northern Arizona's Madison Montgomery (6) connects with the ball in to clear the ball Friday night during a match against Montana at Lumberjack Stadium.