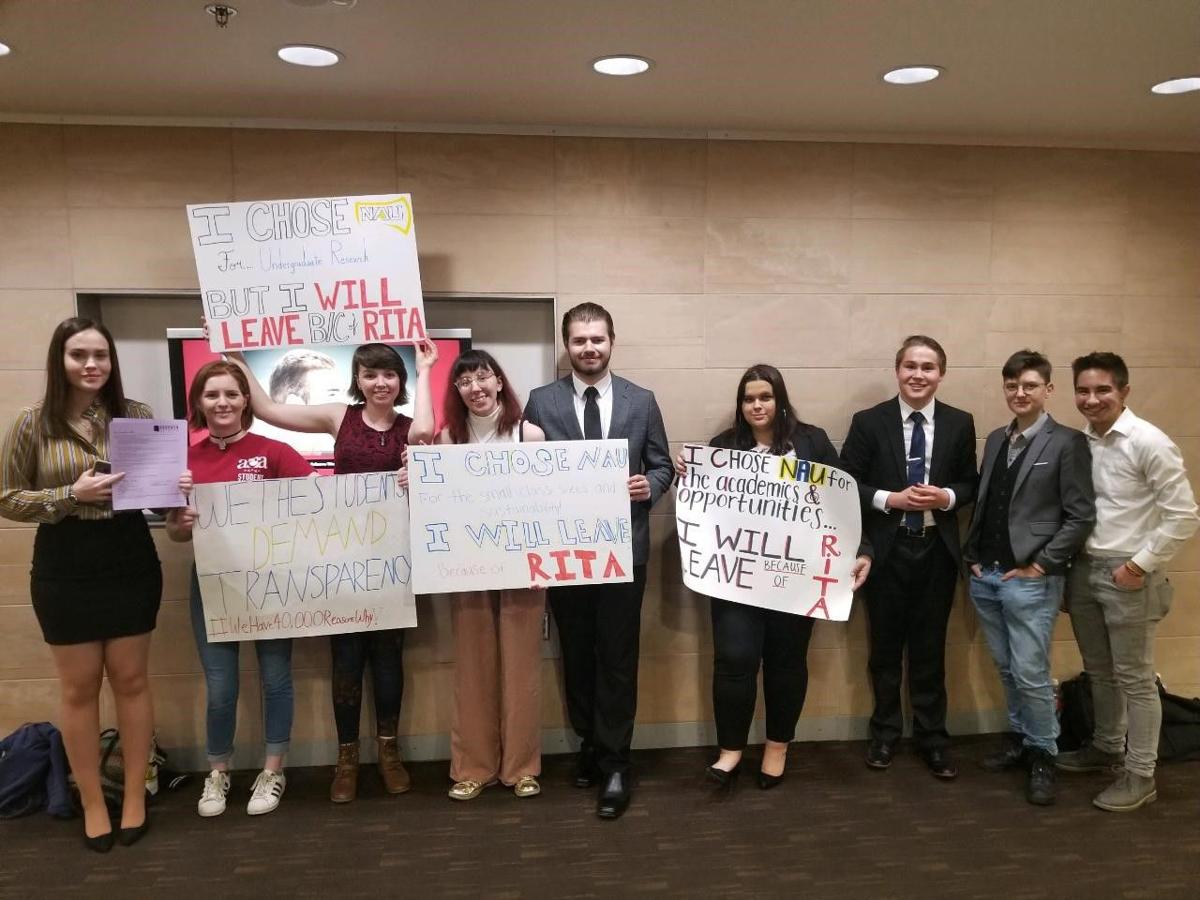 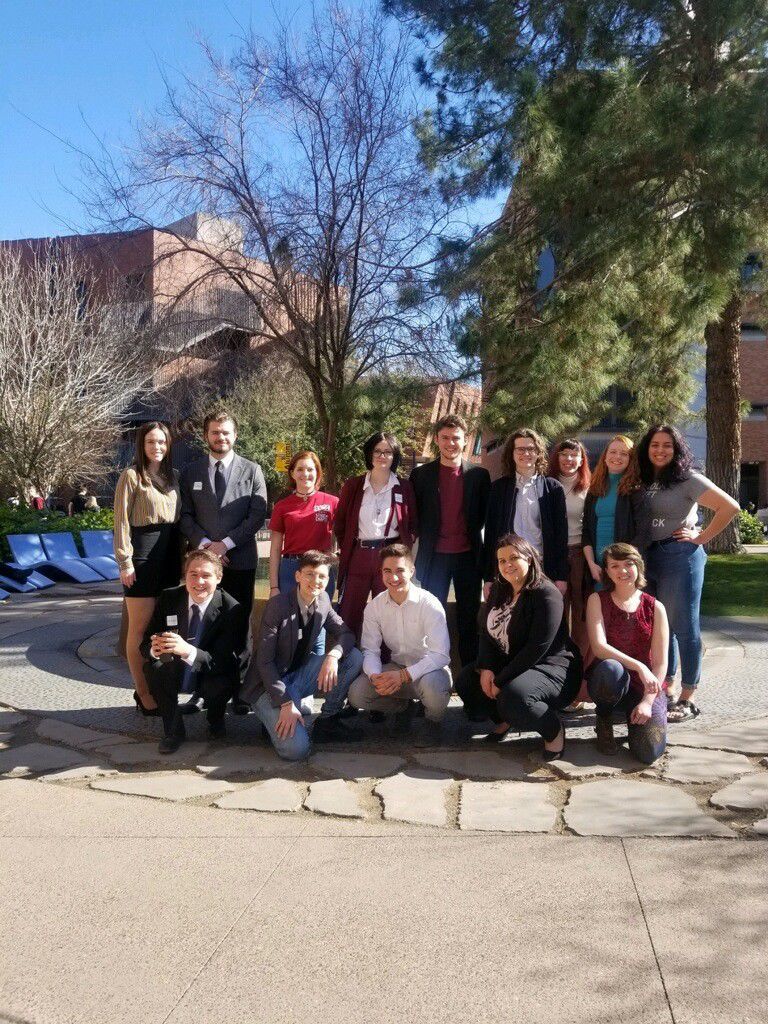 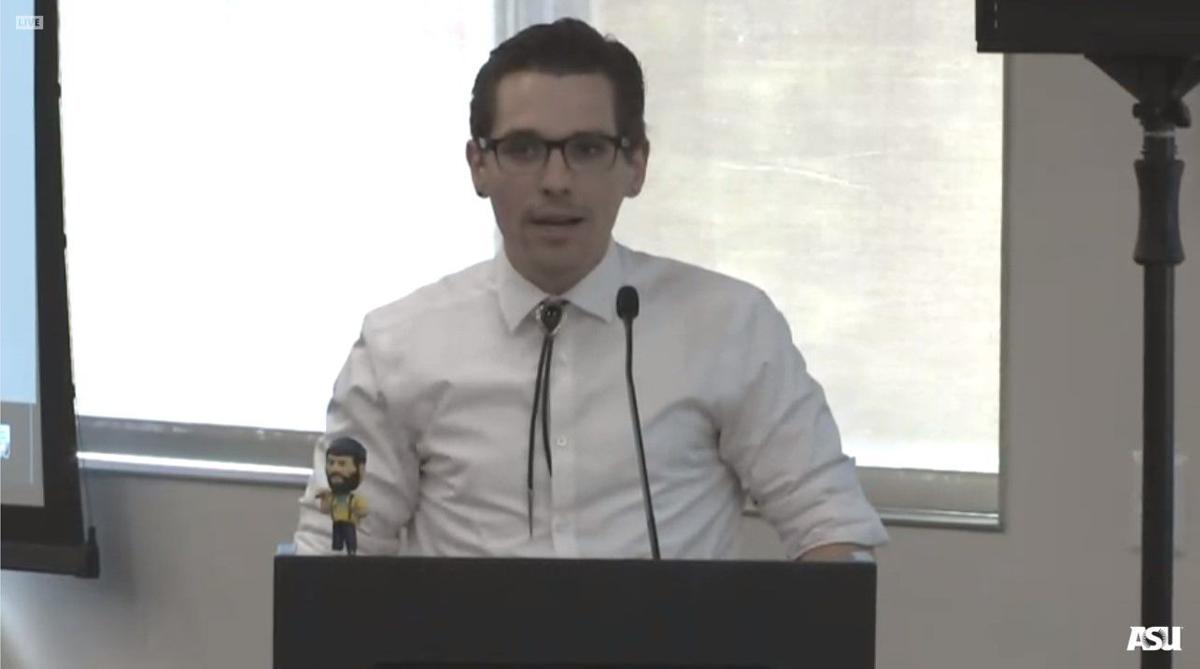 David Slipher, a former NAU student and employee, speaks to the Arizona Board of Regents during its meeting in Tempe to demand NAU President Cheng's termination.

A group of Northern Arizona University students approached the Arizona Board of Regents Thursday to demand an end to Rita Cheng’s tenure as NAU president.

Fourteen NAU students drove from Flagstaff to Arizona State University’s Tempe campus Thursday in order to address the Board's members during its regularly scheduled meeting, which was livestreamed online. During the comments, Cheng was seated alongside the Regents and other Arizona university leaders.

“We deserve a budget that enables our faculty to serve the students to the best of their ability, a campus environment that fosters positive mental health practices and a presidential administration that runs our university like a school and not a business,” said Calli Jones, president of the NAU Young Democrats. “Under President Cheng, we have experienced none of these.”

Jones’ comments reflected those expressed in a letter crafted late last month by a bipartisan group of NAU students calling themselves the #RitaResign Coalition, of which Jones is a member. The letter, demanding Cheng’s resignation, has since been signed by 11 student organizations, former Flagstaff City Councilwoman Eva Putzova and 150 anonymous students and faculty. Jones handed copies of the letter to the Regents and Cheng following her comments at the meeting.

The Coalition was formed following the public release of a state audit that identified $40,000 in university funds used for improperly documented travel Cheng completed last year.

“The biggest reason so many of us were able to take off work or class is we know Rita Cheng is not going to either pay back the full amount of money [identified in the audit] or resign so the next best thing is to go to her boss and take it above her head,” Jones told the Arizona Daily Sun.

Students who were able to comment Thursday referenced not only the effects of Cheng’s administration on the university, but also spillover into the wider Flagstaff community.

Zachary Owens, a member of the NAU Young Democrats who works for the Coconino County Democratic Party, said he is often asked why NAU has taken over Flagstaff.

“There is a very simple answer. It’s because of President Cheng’s leadership that the residents of Flagstaff now feel isolated and disenfranchised,” Owens said, arguing that Cheng does not deserve her $475,000 salary while other employees experience salary cuts and should not have her position because she primarily lives in Scottsdale instead of Flagstaff.

Similarly, Sage Taylor, a criminology and criminal justice major who works in Flagstaff as an event organizer, said he sees a lot of anger from members of the community regarding NAU.

“They’re angry at the school that used to be the cornerstone of our community and they take it out on us students,” Taylor said. “NAU’s rapid expansion is harming our town and President Cheng’s insistence that our problems are old issues adds insult to injury. President Cheng, when old issues don’t go away, it’s because they were failed to be corrected.”

Taylor said he is considering following the path of many of his favorite faculty and leaving NAU because of Cheng, despite receiving the full-tuition Lumberjack Scholarship.

David Slipher, who was employed at NAU’s Office of Alumni Relations from 2012 to 2016, was as passionate about Cheng’s removal as current students, holding up his degree for the Regents and audience to see.

“I want to feel as proud of this degree every day as I did the day I received it in Flagstaff in the Skydome,” said Slipher, who graduated from NAU in 2009 and said he worked closely with Cheng during her first year as president.

“Rita Cheng’s tenure is stained with leadership failure and her public perception is beyond repair. She has poisoned the academic waters and corroded the shared values model intended to ensure stability at NAU,” Slipher said. “Rita’s most fatal flaw is that she can’t even imagine how wrong she could be or how she could be so wrong.”

He concluded, “We all deserve a little bit better than Rita Cheng and she has no right to drive NAU off the reputational and financial cliffs trying to save herself.”

Although the Regents cannot address public comments, Regent Larry Penley, the current chair of ABOR, said prior to the comment period that remarks made during this time will guide the Regents’ decisions in the future.

Jones said the #RitaResign Coalition will determine its next move based on responses from ABOR and Cheng to the Coalition’s letter.

“Even though only three students were allowed time to speak [at the meeting], there are so many student perspectives on this issue and every student has felt repercussions from Rita Cheng’s actions personally, so every student deserves an answer from her,” Jones said.

David Slipher, a former NAU student and employee, speaks to the Arizona Board of Regents during its meeting in Tempe to demand NAU President Cheng's termination.