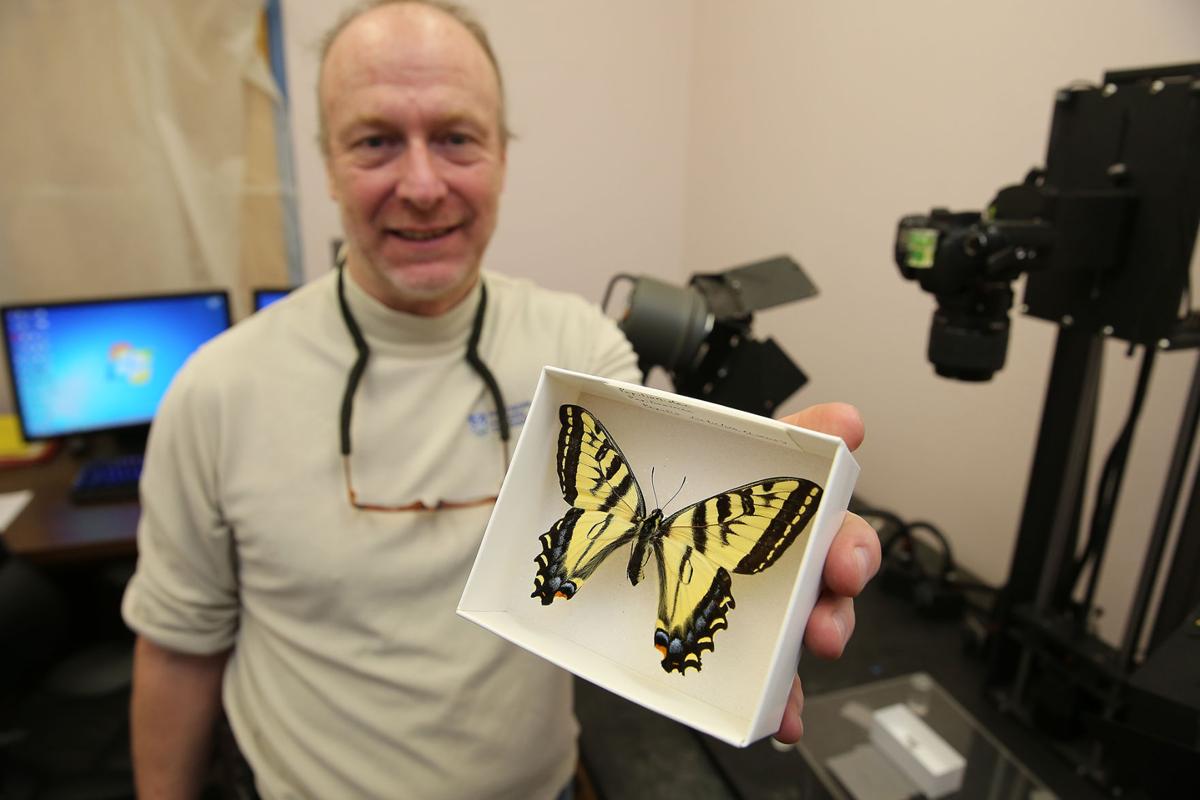 Neil Cobb, director of the Merriam-Powell Center at Northern Arizona University, holds a Papilio Swallowtail butterfly. The specimen is one of 14,000 in the biology department’s collection. The university will photograph and transcribe specimen data to help create a digital database of moth and butterfly species as part of a $3.2 million project supported by the National Science Foundation. 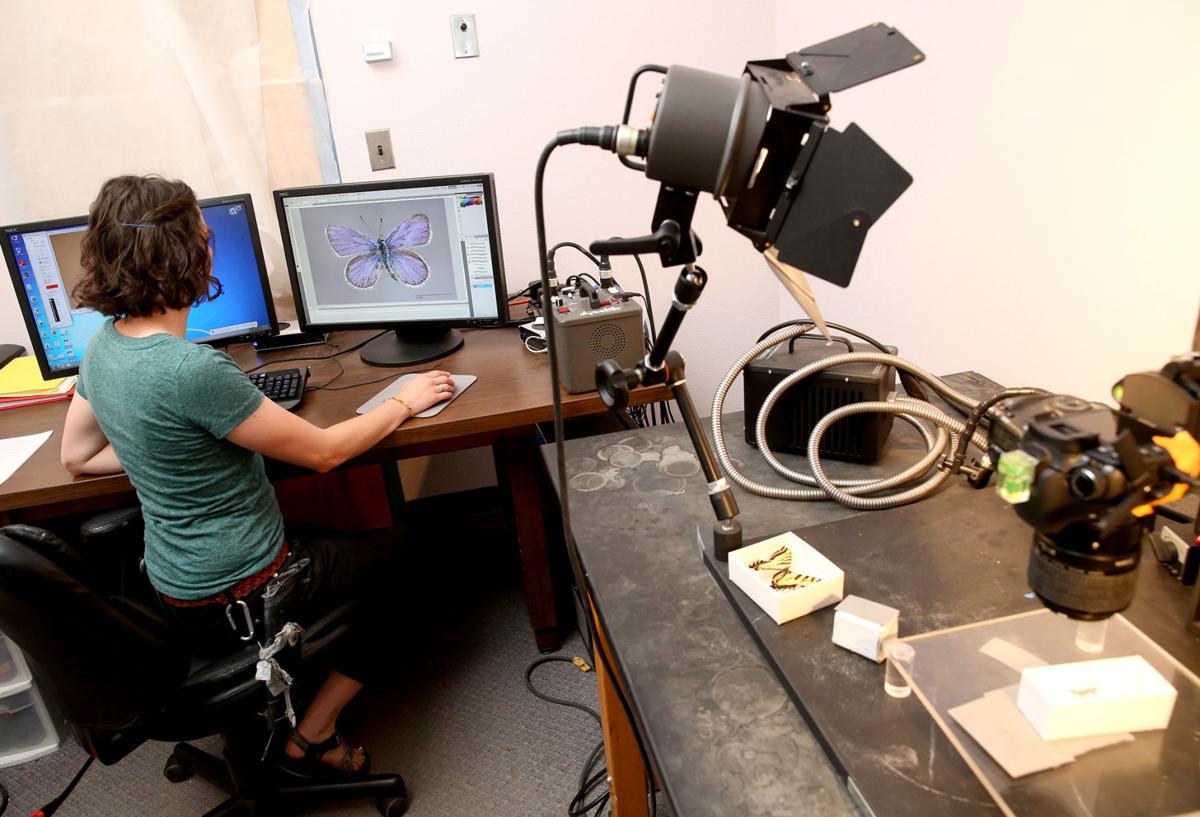 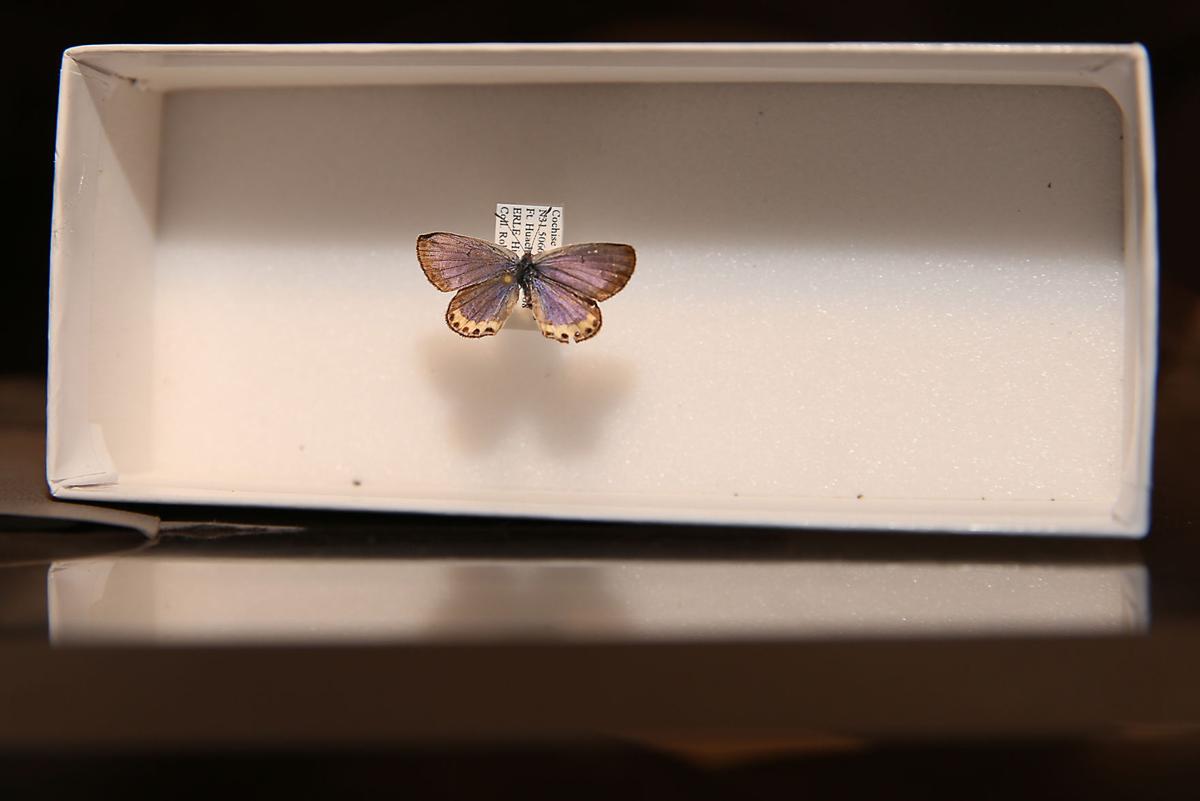 A dime-sized butterfly sits pinned in a specimen box waiting to be photographed and digitally archived Tuesday morning in the biology department at Northern Arizona University.

The butterfly is barely the size of a penny, its coloration hard to make out until Ella Stephens lowers a digital camera close to the specimen and begins snapping photos.

When the image pops up on the nearby computer screen, it reveals wings displaying a fusion of purple and blue bordered by a cream-colored band.

The butterfly specimen is one of thousands in Northern Arizona University’s collection that will be digitized through a new $3.2 million, five-year program led by the university’s Colorado Plateau Biodiversity Center.

Funded by the National Science Foundation, the project is a collaboration between 27 museums throughout the country to create high-resolution photographs of their butterfly and moth specimens and digitally transcribe the tiny paper labels that detail where, when and by whom they were collected.

All of the images and data will be made publicly available via an online portal.

Once it is compiled in a comprehensive database, the information will allow researchers to recreate a picture of where these species live now and where they lived, which can ultimately help scientists predict how they will respond to global climate change, said Neil Cobb, the project lead and director of the Merriam-Powell Center at NAU, which is the umbrella over the biodiversity center.

In total, the grant provides funding to image 1.7 million specimens from across the country and Cobb hopes the ease of the digitization process the project aims to establish will lead to citizen scientists and museums contributing at least another million images to the online portal on their own. That’s in addition to an estimated 1 million existing digitized specimen records that will be incorporated into the project.

That amount of data will allow scientists to answer meaningful ecological questions about distribution, life cycles and seasonal changes for one third to one half of moth and butterfly species in North America, Cobb said.

Being able to trace trends in the insects' population and location over time also allows researchers to make better predictions about which species should be protected and those that are vulnerable, said Akito Kawahara, assistant curator of the University of Florida's Florida Museum of Natural History, a project collaborator.

"This brings everything together into a big unified resource to do big data analysis," Kawahara said.

Why moths and butterflies? They are “truly the most iconic group of insects” Cobb said, making them an ideal vehicle to promote public understanding of arthropods’ ecological importance. They are a principal pollinator group and as larvae are one of the primary converters of green plant materials to useful energy for birds and mammals, said Paul Opler, assistant director of Colorado State University’s C. P. Gillette Museum of Arthropod Diversity that is a collaborator on the project.

Also beneficial is that the insects’ patterned wings allow them to be identified more easily, making it possible to use data contributed by citizen scientists as part of the research database, Cobb said.

While a large amount of data exists about lepidoptera, an order of insects that includes moths and butterflies, a major obstacle has long been making that data accessible, he said. Just 10 percent of the arthropods in the nation’s museums are digitized, for example, which Cobb compared to 90 percent of books in all libraries being wrapped in plastic. The information exists, but it’s locked up in museum collections, unreachable by other scientists, he said.

“For over 100 years we've been collecting specimens, three million to four million per year, and nobody has put money or resources into digitizing the data,” he said.

LepNet is just one branch of a larger NSF effort to expand the pool of digitized data from biological and paleontological collections. The Merriam-Powell Center already heads up another of these “thematic collections networks,” called the Southwest Collections of Arthropods Network, which began in 2012.

Already, that collection has aided research modeling how insects like bees will respond to warmer temperatures projected for the future, Cobb said.

Another major aspect of the LepNet project focuses on involving citizen scientists. A to-be-developed smartphone app will allow people to snap photos of moths and butterflies they see outside as well as provide a way for students and volunteers to easily image specimens in museum collections. Those photos will automatically be submitted to a computer aided identification program that will make a best guess at the species identity. Then the photos, along with information about where and when the insect was seen or collected will ideally become research grade and part of the LepNet online database, Cobb said.

The hope is that throughout the span of the project 60 percent to 70 percent of images come from smartphones, Cobb said. That citizen engagement, bolstered by an education and outreach component of the project, will help promote conservation of the species as well as people learn how the data is used and why, he said.

Flagstaff Medical Center is already seeing an increased number of COVID-19 patients, but hospital leaders say they are prepared for another po…

Customer's always right? Not when maskless in Flagstaff

He strode into Babbitt’s Backcountry Outfitters one recent evening with smartphone in hand, video rolling, with major attitude, and with one o…

A Coconino County Superior Court judge has set the murder case of Sasha Krause, a 27-year-old Sunday school teacher, for a trial in August of 2021.

Dean Pickett: A life devoted to listening, learning and helping in Flagstaff

All of Dean Pickett’s career accomplishments and civic contributions, those tangible and quantifiable things duly noted on an impressive vitae…

What does it take to slide two concrete 3.5 million pound bridges into place? Well, according to the engineers who designed it and the construction workers who built it, all you need is several hydraulic jacks and about 14 gallons of blue Dawn dish soap.

Neil Cobb, director of the Merriam-Powell Center at Northern Arizona University, holds a Papilio Swallowtail butterfly. The specimen is one of 14,000 in the biology department’s collection. The university will photograph and transcribe specimen data to help create a digital database of moth and butterfly species as part of a $3.2 million project supported by the National Science Foundation.

A dime-sized butterfly sits pinned in a specimen box waiting to be photographed and digitally archived Tuesday morning in the biology department at Northern Arizona University.