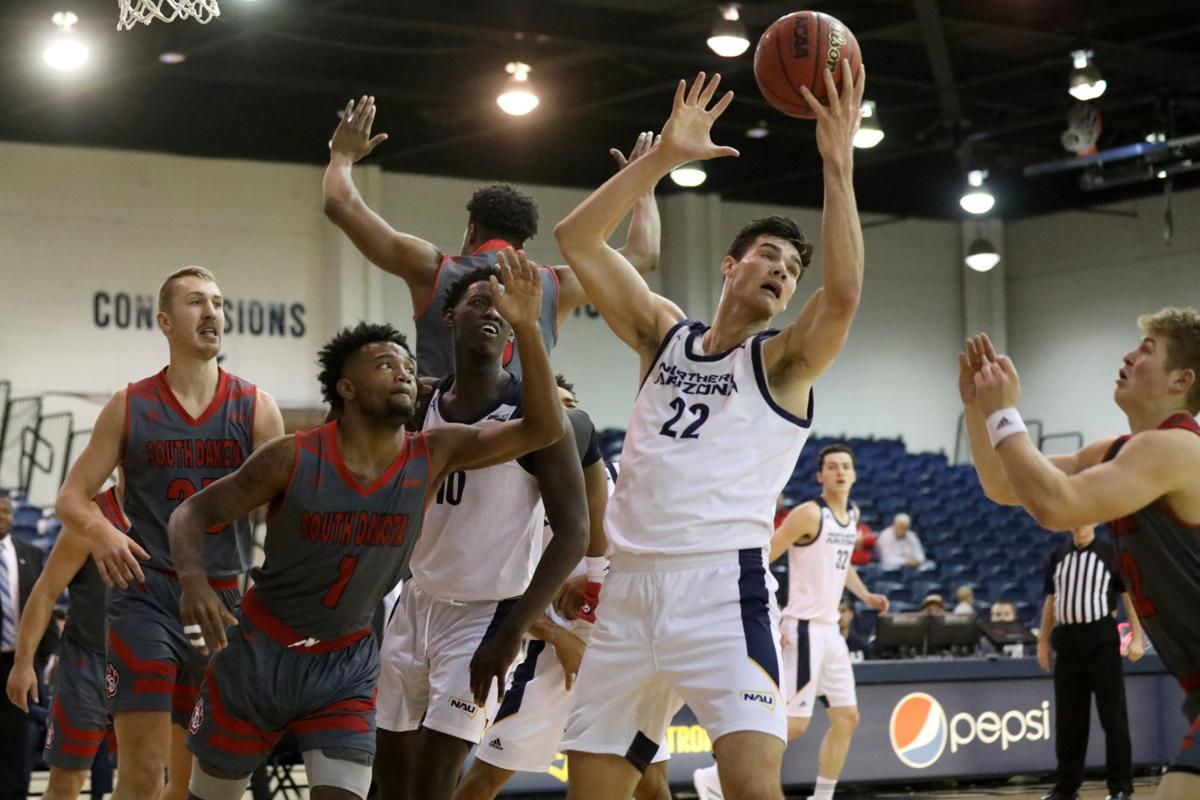 Northern Arizona forward Brooks DeBisschop (22) grabs a rebound in the middle of a group of players during Saturday afternoon's game against South Dakota in Rolle Activity Center. 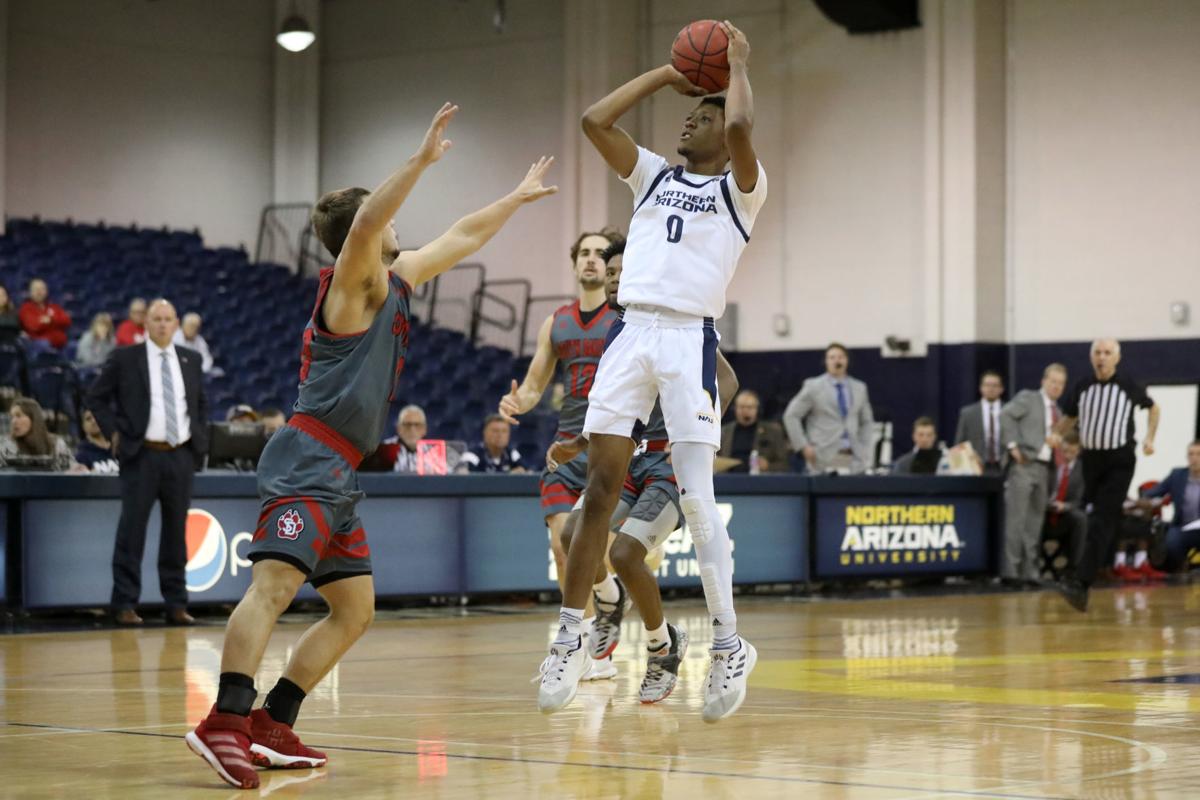 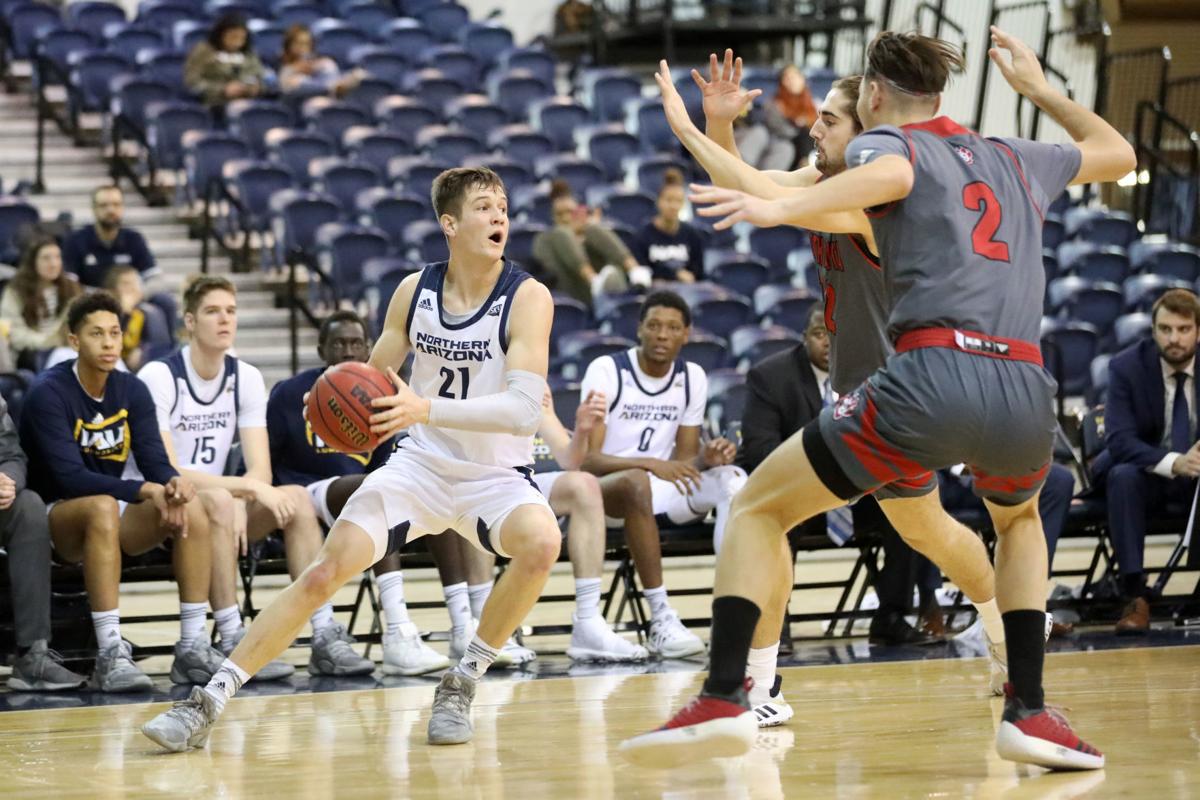 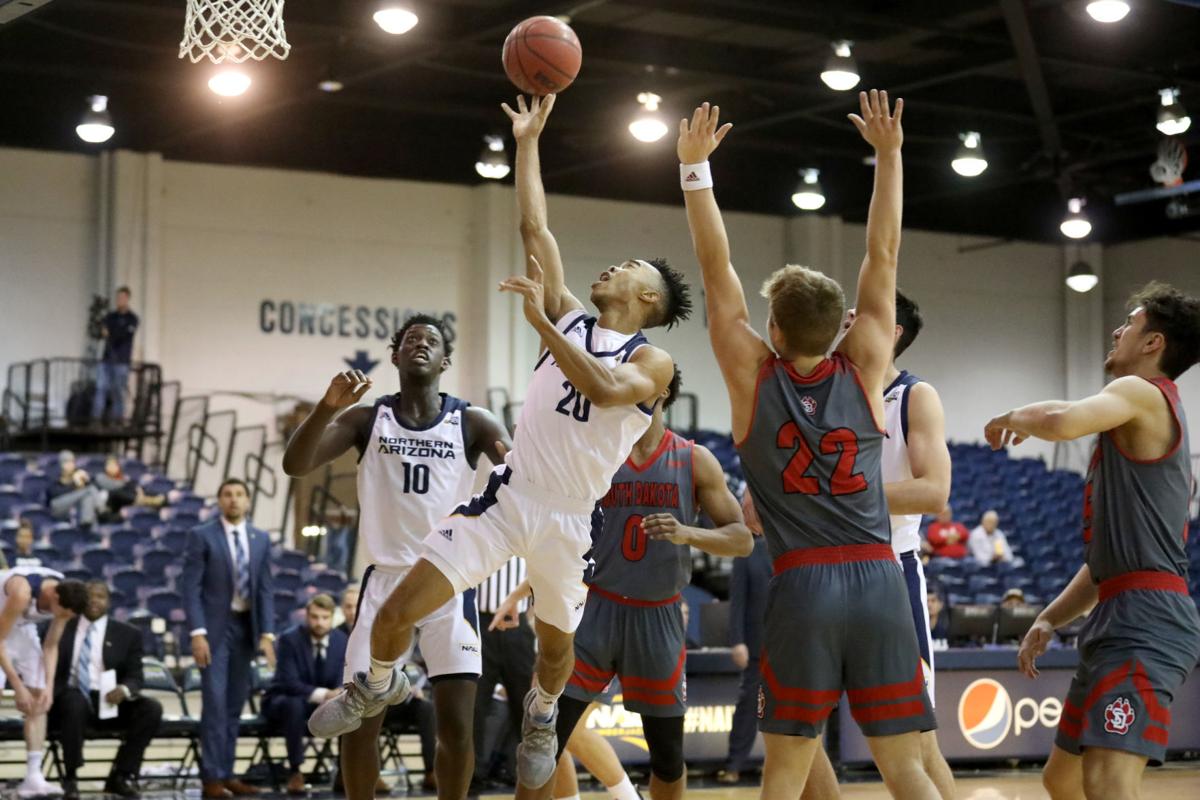 The Northern Arizona men’s basketball team was looking for a signature win under interim head coach Shane Burcar, and might have already got it.

A 7-0 run ignited by a Luke Avdalovic 3-pointer with 1:14 to play Saturday in Rolle Activity Center gave the Lumberjacks enough to secure their first Division I win of the season against South Dakota, 76-72.

The Lumberjacks, ranked 298th per KenPom.com, knocked off the No. 122-ranked Coyotes for their best home nonconference win since beating Kent State in the CIT in 2015.

Northern Arizona improved to 3-1 overall on the season with the home win, while South Dakota dropped just its second to sit at 6-2.

Avdalovic’s 3 came off an inbounds pass after a timeout -- which Burcar said was the design to get Avdalovic an open 3. It didn’t go exactly how the play was drawn up, as Avdalovic used a head fake and a quick dribble to get enough room for a one-legged pull up jumper.

"That was a great play -- the play worked well but it worked because we have Luke Avdalovic," Burcar said.

The shot tied the game at 72-all with 1:14 left, putting Northern Arizona right back in the game after being down 70-62.

The Lumberjacks took advantage of the timely call, getting a pair of free throws from Cameron Shelton after he was fouled on a drive. The two makes at the line put Northern Arizona up 74-72 with just under 40 seconds left in regulation.

South Dakota didn’t get a chance to answer the score, turning the ball right back over after Shelton deflected a pass to teammate Bernie Andre, who quickly found Cameron Satterwhite on a fast break. Satterwhite drew a flagrant 1 on a dunk attempt, hitting one of his two chances at the line to make it a 3-point game late.

One last free throw by Shelton was all Northern Arizona needed to cement the win. Shelton finished with 10 points on a rough 3-of-13 shooting performance as he made key plays despite the poor shooting day.

South Dakota got out to its largest lead late in the second half at 4:05. Northern Arizona outscored the Coyotes 15-4 in the final four minutes.

Hagedorn came into the afternoon leading the NCAA in 3-point field goal percentage, hitting on 75% of his attempts.

Northern Arizona didn’t allow him to attempt a single 3. He finished the day 2-of-3 shooting from the field and 6 of 6 from the foul stripe. Limiting his attempts from behind the arc was the priority, but even Burcar didn’t expect him to fail to attempt a shot from deep.

"That's all Brooks DeBisschop and Nik Mains when he went in," Burcar said. "Our game plan was to limit 3-pointers, not give zero. To have him shoot zero 3-pointers is a testament to (assistant coach Tyler) Ojanen. I was just part of the fun today and the players stepped up and made plays."

DeBisschop outplayed Hagedorn, scoring 13 points, hauling in eight boards and dishing out three assists all while checking Hagedorn on the other end.

ROUGH DAY AT THE LINE

The win comes despite a bad day at the free-throw line, as the Lumberjacks went 20 of 35. The game was riddled with fouls. South Dakota and Northern Arizona were called for a combined 49 fouls and attempted a combined 56 free throws.

Northern Arizona forward Brooks DeBisschop (22) grabs a rebound in the middle of a group of players during Saturday afternoon's game against South Dakota in Rolle Activity Center.